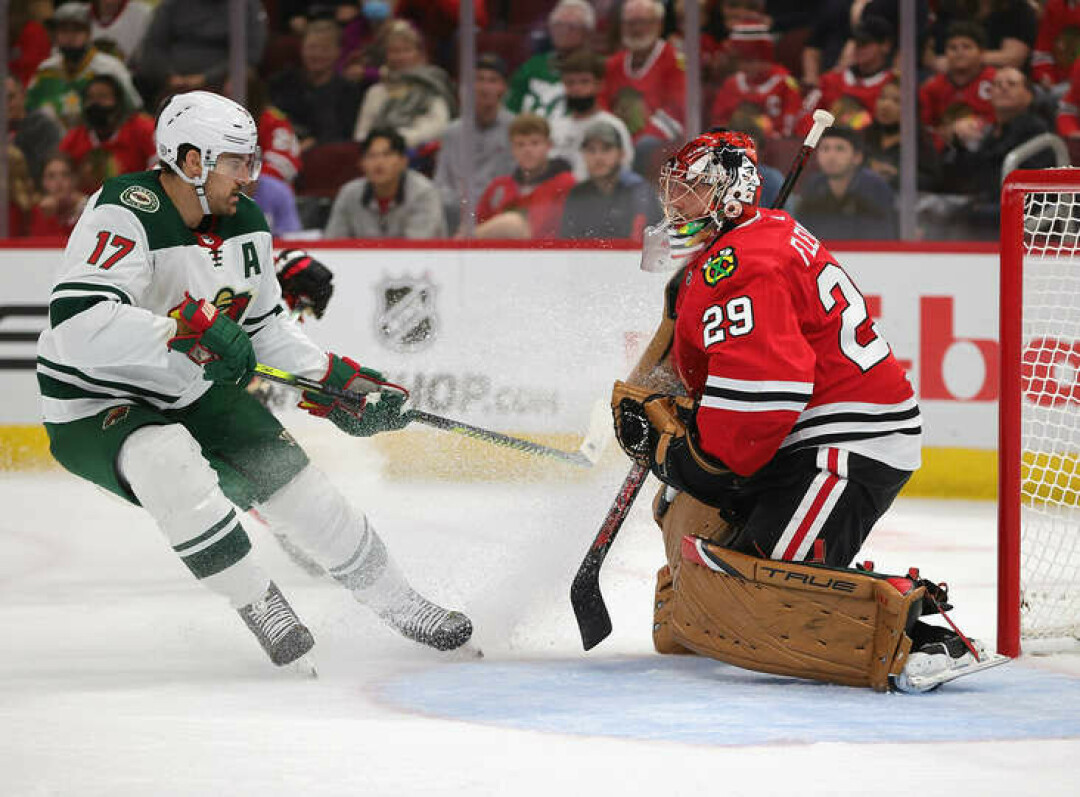 SILVER CLIFF – By all accounts the training camp was very productive. The preseason games are in the books. The opening night roster has been selected, and the team arrived in the Twin Ports this afternoon for a team golf outing, practice and team bonding.
The Minnesota Wild is ready to get the 2021-22 season kicked off. The club hit a bit of a clinker last night in Chicago versus the Blackhawks in the preseason finale. They played well in the first period, and after that, it was all Hawks for a 5-1 final and an embarrassing loss.
On the positive side, there was only one serious injury to note from the camp (Matt Boldy, fractured ankle), and the team is anxious to begin the campaign.
For this year, there are some notable changes on the roster. Gone are Zach Parise and Ryan Suter. This topic has been debated ad nauseum, and I am opting to leave it at that. All things considered, though, I believe it was time for that roster move.
Also gone from the 23-man roster (and 50-man) are Nick Bonino, Ian Cole, former UMD star Carson Soucy, Brad Hunt, Marcus Johansson, Louie Belpedio and Matt Bartkowski.
If you factor in the Mikko Koivu departure/retirement from the season prior, you can summarize most of these moves as getting younger, faster and perhaps a bit more skilled.
As the Parise-Suter buyouts were the epic news of the summer, the resigning of the current Rookie of the Year and budding superstar Kirill Kaprizov placed that topic on the back burner. It was a frustrating process for much of the fan base (including myself), but it ended well.
GM Bill Guerin never seemed to doubt this would get done, and after a compromise on the term, Kaprizov will be residing in the State of Hockey for the next five seasons. The agreement was made on the day before camp opened, and you could feel a collective sigh of relief go statewide upon its announcement.
The very skilled forward Kevin Fiala also needed a new contract but only emerged with a one-year pact that will be revisited as soon as the timeframe for extensions can begin.
Joining them on the WILD roster will be the newly acquired former Golden Gopher Rem Pilick, who was released by NSH. Frederick Gaudreau, Dimitry Kulikov, Jon Merrill and Jordie Benn, who were all UFA signings; and 2016 draftee Brandon Duhaime, who at 24, is making his first NHL roster.
Here is the “beginning” 23-man:
Goalies: Talbot, Kahkonen
Defense: Spurgeon, Goligoski, Brodin, Dumba, Kulikov, Merrill, and Benn
Forwards; Kaprizov, Zuccarello, Eriksson Ek, Greenway, Hartman, Foligno, Sturm, Fiala, Rask, Gaudreau, Bjugstad, Duhaime and Pitlick.
*Boldy begins the season on the shelf and is listed as day to day.
The season commences Friday night in Anaheim versus the Duck, followed by a tilt against the LAK before coming home on Tuesday the 19th to meet WIN in the home opener.
WILD fans will be back in abundance, and the anticipation in the Metro area and across the state is palpable.
The team is looking to build upon the positive experience from last season when they went 35-16-5 in an abbreviated 56-game season. Of course, the team didn’t survive the first round of the Cup tourney, but taking the Vegas Golden Knights to seven games was still a good overall marker.
The VGK went to the Cup semis before bowing out to an unlikely opponent in the Montreal Canadiens.
Some observers felt the first two rounds (def. MIN & COL) wore down the VGK, leaving them unable to go up against and defeat the Habs. There is little doubt the Habs were on a magic carpet ride in the playoffs.
The “Tale of the Tape” from last season is this: the WILD was 9th overall in the league on a 35-16-5 record for 75 points.
Team offense provided 3.21 GPG and on defense a 2.84 GAA. The PP was spotty early on, had some improvement, but finished the season at 17.6% (24th overall) in a game where 20% would be a minimum expectation.
The PK was 12th with an 80.8% success rate. Veteran coach Ken Hitchcock stated a few years back that if your combined numbers on those two stats were at least 103.0, you had a very good team on your hands.
The WILD was 7-4 in OT games and 1-1 in the SO. Their CORSI for/60 was 48.89 (28th), and the CORSI against/60 was 56.86. (26th) Is that a stat worth improving on?
Yes. Consider that the Cup Champion Lightning were 13th and 4th in that regard for comparison.
So what can we expect from this “new” version of the WILD?
In goal, I’d expect the same play, and it will be at least as good as last season, provided the defense in front of them performs well. In regard to that, though, Suter and Cole were steady eddies back there and defended the house.
The loss of Soucy will hurt. He brought a presence to the blueline. Goligoski is close in age to Suter and has a good hockey IQ and vision. His offense has seen some decline, and he had some turnover problems on his last club, the Coyotes.
In what I saw of Kulikov thus far, he is a smooth skater and a veteran presence. I’m not certain about Merrill yet. I believe it’s fair to say that Benn had an awkward preseason.
It may take a few games for this group to gel, but I think they will. In all honesty, last year’s group was likely a bit better than this one might be.
Upfront, the Kaprizov-Zuccarello-Eriksson Ek line was dominating in offensive zone possession in the preseason at times. I look for the Foligno-Hartman-Greenway line to be quite good after a few games. The unit of Fiala-Rask-Gaudreau will take some time to gain familiarity with each other. They will, and with the presence of Fiala, this line could be potent.

I believe Bjugstad-Sturm and Gaudreau will start the season together as the fourth unit, rendering Pitlick to the press box on some evenings. I have heard some analysts state that this could be one of the stronger “fourth” lines in the league this year. Time will tell.
How will the team do this year? With the divisions and conferences back to normal, excepting that ARI comes into the Central with expansion newcomer Seattle entering the Pacific, the WILD will be in the usual dogfight for a playoff spot.
In fact, several analysts expect the WILD to drop slightly. They are picked for a 5th-place spot in the division but will get one of the two wildcard spots available. If Vegas wins the Pacific, that means the WILD could face them in the tourney for a second-year standing.
As some have picked the VGK to win the CUP this year (not me), that would mean the Wild would face another first-round exit. Ouch.
The expected order of finish in the Central;
1) COL
2) WIN
3) STL
4) DAL
5) MIN
6) CHI
7) NSH
8) ARI
Is this how it will unfold?
I disagree, but I can’t wait to find out! PEACE