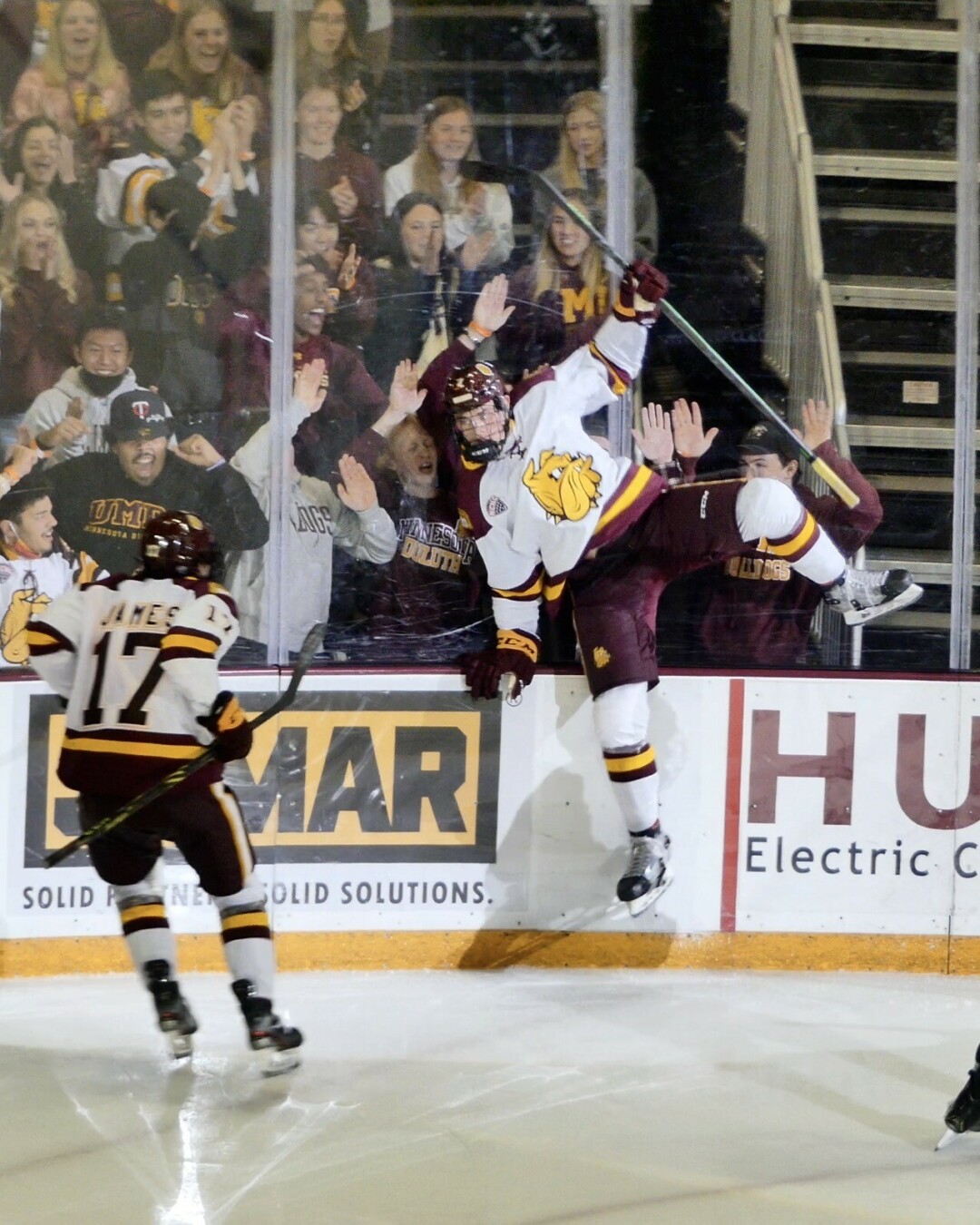 Blake Biondi tried to jump over the plexiglass in celebration after scoring the game-winning goal in Saturday’s home-opening 2-1 UMD vicvtory against Bemidji State. Photos by John Gilbert.

Homecoming is always a festive time on a college campus, and UMD will try to do it up big weekend with a hectic schedule of football, volleyball and both men’s and women’s hockey teams in a whirlwind of action Friday through Sunday.

However, UMD may have missed the perfect Homecoming weekend last weekend, when the women’s hockey team opened its home season with a scintillating 5-4 overtime victory over arch-rival Minnesota, the day after losing a tough 3-1 game on an open netter to the Gophers, and the men’s hockey team opened its season by completing a sweep of a tough Bemidji State outfit with a 2-1 victory at AMSOIL Arena, after winning 4-2 with an empty-net goal Friday in Bemidji.

It was the first time fans had been allowed into AMSOIL in more than a year, and it doesn’t get much better in UMD sports than for the men to beat an intense neighborhood rival like the Beavers, while the women played well in the opener against the Gophers and dominated great parts of the second game before blowing a 4-1 lead and rescuing a victory in overtime.

The football team won and the volleyball team lost, on the road, so they get to come home and make up for it on the official Homecoming this weekend.

If you’re a UMD alumnus or a hardy fan, you can get caught up in the whirlwind, which starts on Friday.
The UMD women’s hockey team has no bigger rival than Minnesota, but Wisconsin is close, especially this year, when the Badgers are defending NCAA champions, coming off a WCHA title they gained only by scoring two late goals at AMSOIL Arena and winning in overtime on the final day of the season.
So the Badgers follow the Gophers into AMSOIL this weekend, and to fit into the scheme of things, they have to play the first game at noon on Friday, and the second game at 1 pm Sunday. Weird setting for a WCHA series, but it will work.

The reason for the Friday-Sunday schedule is that the UMD men won the right to play host to the prestigious Icebreaker Tournament, annually held to signify the start of a new season by gathering four teams from different conferences to play a pair of doubleheaders.

And UMD attracted a powerful field.

On Friday, right after the first women’s game, No. 1 ranked Minnesota State Mankato from the newly reformed CCHA takes on Providence, a traditional standout from Hockey East at 3 pm, and the UMD men take on Big Ten favorite Michigan at 7:35.

Michigan is loaded, with a roster that sparkles with first-round draft picks from this summer’s NHL draft – to say nothing of being the school that UMD defeated in an overtime 2011 NCAA championship game at Xcel Energy Center for the first of three Bulldog titles.

While AMSOIL Arena will be jumping Friday night, so will Romano Gym, where UMD is still trying to find its rhythm in volleyball and will face Minot at 6 pm.

But that will be nothing next to Saturday, which starts with the Homecoming football game against Concordia of St. Paul at High Noon. At 4 pm, Mary will face UMD in volleyball, at the same starting time at what should be a sizzling hockey game between Michigan and Mankato at AMSOIL. That will be followed at 7:30 by the UMD-Providence hockey game.

That may seem like an exhausting schedule, but there’s more. On Sunday, when all the visiting teams are either back home or heading there, UMD still has that 1 pm women’s hockey rematch against Wisconsin to conclude a series with both WHCA and NCAA significance.

Meanwhile, St. Scholastica isn’t having homecoming, but to share in the fun the Saints try again to move up in status in their first season in the MIAC with a game against Carleton at 1:30.
The Saints played a pretty ruthless Gustavus bunch last Saturday at Malosky Stadium, and were serioujsly overrun in a 72-7 rout by the Gusties. 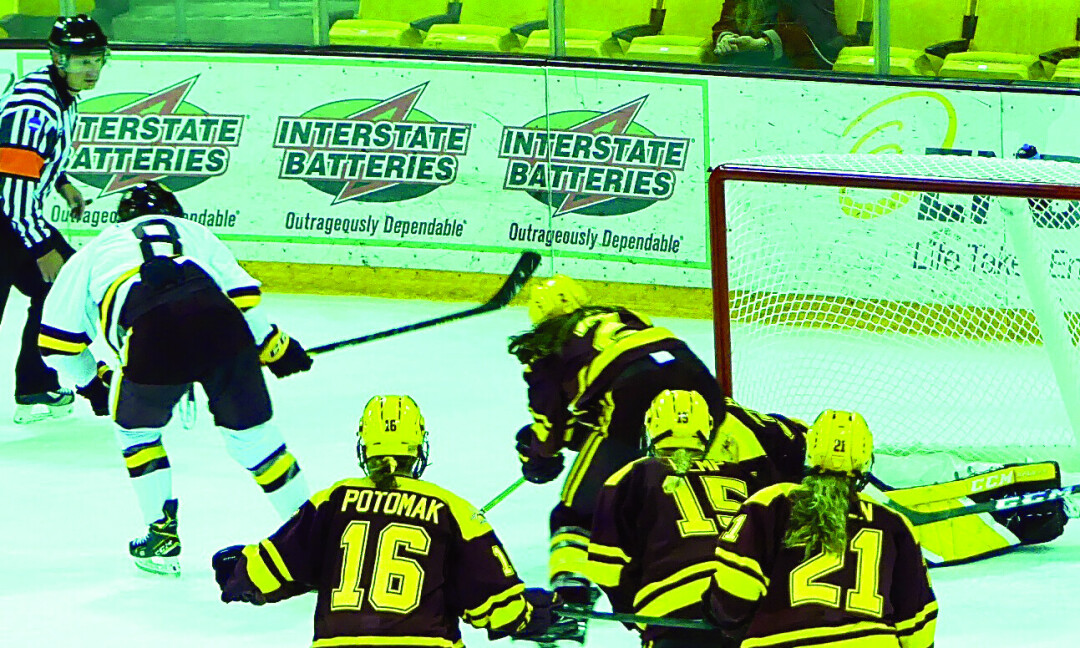 Fifth-year transfer Elizabeth Giguere, a former Patty Kazmaier winner at Clarkson, showed her expertise by holding the puck until Gopher goalie Laura Bench went down, then Giguere scored with a backhand in UMD’s 3-1 empty-net loss Friday.

Now we can turn back to last weekend, where some memorable performances highlighted AMSOIL.

The Bulldogs women had a team mission of starting out strong against Minnesota, but the solidly rebuilt Gophers took them out of that plan with a goal by Peyton Hemp early and Ella Huber late in the first period. The Bulldogs came back for a goal that best explained what makes fifth-year transfer Elizabeth Giguere an elite player.

Late in the second period, Gabbie Hughes came out of the right corner and got the puck to Giguere, who somehow got between the Minnesota defenders and goaltender Lauren Bench. Giguere made a deft move, then showed amazing poise to hold the puck while she skated a stride or two to her left, outwitting Bench.

“When she went down, I went up,” said Giguere, who lifted a backhander in from wide to the left of the goal.

As usual, Giguere insisted she was just the recipient of great play by her line mates, but the typical player might have shot quickly to beat the goalie; Giguere is not typical.

The Bulldogs pressed through the third period but couldn’t get the equalizer, despite outshooting the Gophers 15-4 in the final period, after being outshot 20-10 through two.

The Gophers also got the jump Saturday in the rematch when Taylor Heise scored at 0:39, but where the early deficit seemed to demoralize the Bulldogs Friday, it gave them inspiration in the rematch, and Gabbie Hughes scored a power play goal at 4:07 and another one at 16:45 for a 2-1 UMD lead.

Maureen McMahon converted a feed at the crease with 19 seconds left to give UMD a 3-1 lead at the first intermission. Anna Klein scored to make it 4-1 at 11:06 of the second, but then it was the Gophers who woke up, and Emily Oden cut the lead to 4-2 just 25 seconds later.

The Bulldogs held on for 16 minutes of the third period, but a long review of a pileup at the UMD crease led to a decision to credit a goal to Gopher Abigail Boreen at 16:22, jutting the deficit to 4-3.

That feeling you could imagine might have been of fingers tightening around the throat, and with Bench pulled for an extra skater, Boreen scored again with 32 seconds remaining in regulation for a 4-4 tie.to join the attack and got the puck cut just a step from the goal line near the left corner. She moved in, and cut loose with a shot.

Nobody was certain how, but the puck either glanced off goaltender Bench or found a tiny opening, but it hit then net, Flaherty, continuing on behind the net, exulted, as did Van Wieren and McMahon, who assisted on the game-winning goal to give the Bulldogs a 5-4 triumph, after all.

Flaherty said she learned how to join the offense while playing with current Canadian Olympic defenseman Ashton Bell last year. “So I moved in, waited for an opening, and I shot with more confidence.”

The men’s team took the ice an hour later Saturday night, and also displayed a lot of confidence to gain the sweep over Bemidji State.

Always a tough, gritty foe, the Beavers played the Bulldogs even all the way, through a scoreless first period and until 12:35 of the second, when Kobe Roth clicked to deflect a Noah Cates feed that glanced lightly off the left pipe and slithered in for a 1-0 UMD lead. Just 31 seconds later, Alex Ierulo tied it for the Beavers and it boiled into the third period, 1-1 and getting pretty chippy around the edges.

Midway through the third period, Hermantown sophomore Blake Biondi corralled a loose puck in center ice and fed Quinn Olson, who returned a feed to Biondi, moving toward the slot.

Biondi, a big-time scorer in his days playing center at Hermantown, was wide open and took a second to tee up the puck and check goaltender Gavin Enright before firing a missile into the left side of the net. As big as the goal was, Biondi’s follow-through was spectacular, as he got as far as the left corner before leaping as if trying to hang another banner in the rafters. He might have qualified for an Olympic high jump, and when he came down he was engulfed by teammates.

The Bulldogs were able to keep the pressure on and the puck in the Beaver zone to hold that as the game-winner for a 2-1 victory.

“It’s never easy to beat a good team twice,” said Roth, who did his part to establish unprecedented balance in Bulldog scoring during the weekend.

At Bemidji, Luke Loheit, Noah Cates, Quinn Olson and Koby Bender got goals, and at AMSOIL, Roth and Biondi scored, meaning that not only did six different players get the six weekend goals, but all four lines scored. And Zach Stejskal was Friday’s game-winning goalie while Ryan Fanti was in control Saturday.

Among dozens of noteworthy performances, maybe the top one came Monday night, when Baltimore trailed Carson Went and the Indianapolis Colts 22-3 until the final minute of the third quarter. Then Lamar Jackson took over. He threw a 43-yard touchdown pass with 0:56 left isn the third quarter, then threw two more touchdown passes in the fourth quarter, including the tying tally with 0:35 left in regulation. For good measure, Jackson won the game with his fourth touchdown pass of the night.

It looks like Russell Wilson will be out for 6-8 weeks after needing surgery on the middle finger of his passing hand last week in Seattle’s wrenching loss to the Los Angeles Rams and Matt Stafford – who injured the index finger on his passing hand! If Wilson is out, the Seahawks may be out of contention.

My suggestion is that they make a deal with Cleveland, which is getting outstanding quarterback play from Baker Mayfield, and has our old friend, Case Keenum, on the bench in reserve. If Seattle could pry Keenum away from the Browns, he could give them a reasonable replica of Russell Wilson for the rest of the season. Remember, the one year he got to start for the Vikings, they went 11-3 under his guidance – including the Minneapolis Miracle touchdown pass.