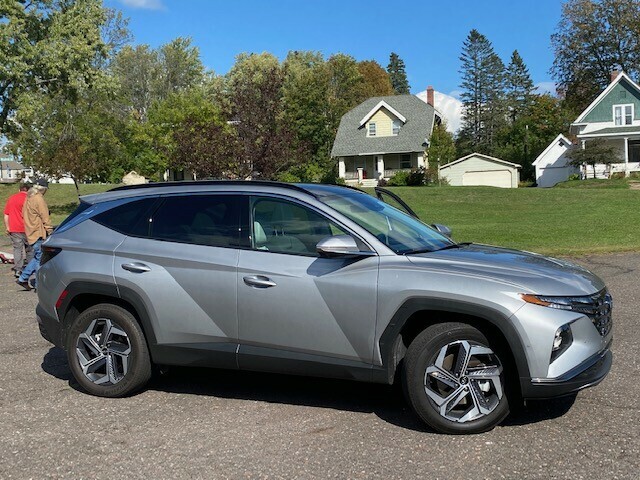 For exactly a decade, Hyundai has surged from being a South Korean interloper on the automotive scene to becoming a surprising competitor and then a superior product for solid quality, technology and fuel efficiency all at once, in both its cars and its SUVs.

It was the 2011 model year when the Sonata was totally redone to ignite Hyundai into the future.

The new Sonata and Elantra now lead the way for Hyundai sedans, while the large Palisade and the compact Kona have set high standards, large and small, for SUVs.

A year ago, Hyundai redesigned its Santa Fe, the midsize SUV entry, leaving only the Tucson in need of renewal. That renewal is happening right now. The redesign is outstanding, and thrusts the Tucson as a 2022 model up into the heady atmosphere dominated by the RAV4, CR-V, Rogue and CX-5 – the outstanding entries from Toyota, Honda, Nissan and Mazda, respectively, Japan’s top vehicles.

Just being clustered with those four is a high achievement, but the Tucson is more than that, despite what the evaluators at Motor Trend might suggest.

In its latest issue, Motor Trend compared the Tucson with the CR-V, RAV4 and Rogue, and ranked the CR-V first, but apparently figured readers wouldn’t notice that the RAV4, Rogue and Tucson all were equipped with competitive 2.5-liter 4-cylinder engines, while the CR-V had a 1.5-liter turbocharged 4 – and with the advantage of the only turbo engine, it ran away with the performance categories.

Turbochargers can do that for a smaller, higher-revving engine. To be fair, however, the magazine could have tested the Tucson model I drove, which was the “Ultimate,” and came with a turbo 1.6 engine, plus a hybrid setup with a battery pack stashed under the back seat.

Frankly, I like all of those other vehicles, and the Mazda CX-5, as well, but switching to the zippier 1.6 turbo in the Tucson would have put it on equal performance footing with the CR-V, and adding the hybrid technology vaults it above and beyond that elite group.

The LG Chem battery pack is a 270-volt Lithium-ion polymer.

Under the skin, the Tucson is 182.3 inches long with a 108.5 inch wheelbase and weigh 3,762 pounds with all-wheel drive. Independent front and rear suspension use MacPherson struts in the front and multilink in the rear.

A big reason for the solid feel to the Tucson is the rigidity of the platform, plus the body-strength that comes from a high dose of high-strength steel and high-tensile steel from Hyundai’s in-house steel plant.

While it borrows from the classy Palisade, and the Santa Fe, I think it steps boldly ahead to establish a new face for Hyundai.

But while discussing performance, I must point out that in a week’s time driving up and down the North Shore of Lake Superior, and scaling and descending the steep hills of Duluth, I found the performance was not only outstanding in the Tucson, but the fuel economy went off the scale.

On one trip downtown and up and down the hills, I spotted the on-board calculator showing 55.6 miles per gallon!

Now, I don’t think you could count on that as a regular deal, but the EPA estimates show 37 mpg city and 36 highway with a combined 37 mpg average.

On top of that, the ideal situation for a hybrid is to be able to either plug it in and get maximum charge for the battery pack, or be able to run it in an area where you can get a lot of regenerative braking, which can recharge the battery pack to the same extent as the plug-in device, just not as promptly.

My suggestion to car-shoppers who live in Duluth, of course, is that coming down from the steep hillside is the perfect recharging station for a hybrid.

The test Tucson had steering wheel paddles, which I enjoy and use for manual override on ujpshifts but also for controlling speed on the downslopes. You come down the 12-block hillside on Lake Avenue, for example, and if you don’t use the paddles, you can ride the brake lightly, which is the ideal way to appreciate how it regenerates electricity like crazy.

That means if you live 5 miles from work, you could go back and forth for three days without ever using the very efficient and quick gas engine.

If you live 10 miles from home, you could only get a bit less than two days of pure-electric driving – unless you went shopping up on top of the hill and used the regenerating system to keep your battery pack full of energy.

In any case, your fuel savings would be substantial, and your “range anxiety” would drop to nonexistent because if you run completely out of electric energy the gas engine is there to keep you going.

The Limited Ultimate is the top-of-the-line Tucson, and it runs the sticker price up to $38,704 over the Ultimate’s base price of $34,700, but that is with all the options, including all-wheel drive, white leather seats, a high-end Bose audio system, fancier 19-inch alloy wheels, high-gloss black grille, and an enormous sunroof and-or moonroof, which stretches from side-to-side and front to rear.

Frankly, I find the converging contours on the sides pretty neat, and the front design where the LED headlights are subtle as they shine out from within the horizontal bars of the grille, and I would prefer to not have the high-gloss black paint.

The rear, with its full-width red LED light-bar and the other flashy tail lights, has a distinctive look to it, and opening the hatch reveals a large luggage space.

The designers went for a Mazda-like holistic look to the styling, but where Mazda lets the contours do the light-grabbing, Hyundai’s designers couldn’t resist using some chrome, some molding and some gloss black to provide, maybe, too much of a good thing instead of the subtle blending of contours.

But maybe it’s good for Hyundai to keep emerging from its cocoon toward full-butterfly stature. The Palisade is stylish but restrained, and the Santa Fe goes a bit farther toward its own styling, so now the

Tucson breaks down the barriers, even if the Ultimate may reach a bit.

The firm comfort of the bucket seats is complemented by both heating and cooling features, and the rear seat is roomy enough for large adults who need legroom and headroom.

The driver gets all the controls on the console, with a push-button panel for the gear changes, from drive to neutral to reverse, and a separate button for park. Another switch lets you choose driving mode, from eco to normal to sport.

All of those controls help the standard Hyundai safety stuff, which goes beyond the front and rear collision warnings and has lane-departure warning and assist, plus lane-centering assist to keep you in the middle of your lane on curvy roads.

It also has the Palisade-originated feature that when you’re driving and hit the turn signal, the right or left gauge on the instrument panel changes to give you a full outside view of the adjacent lane to add to your confidence in your lane-change or turn.

Much as I enjoyed extensive drives in the Palisade, I thought the Santa Fe adapted many of its features in a more compact SUV. But now there is little question that the Tucson is big enough for most small or starting families, with the sportiness and safety and fuel efficiency built in to make it worthy of consideration by any SUV customer.

If the hybrid makes the most sense for current buyers, the next question is how much better the plug-in hybrid might be, and when and if Hyundai will go to its advanced full-electric plan for future Tucsons.
The future doesn’t matter a lot, however, when the new Tucson brings most of the future to the showrooms and traffic patters right now.