A weizenbock for a wisenheimer 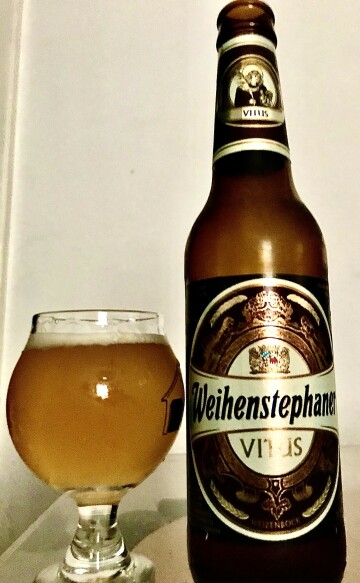 Sitting there among myriad autumnal offerings was a sixer of Vitus from the oldest brewery in the world, Weihenstephaner.

I’ve long been a fan of the lagers and wheat beers from this brewery that traces its history back centuries when Benedctine monks began brewing beer on the Weihenstephan hill, but I’ve never run into Vitus.

It’s a 7.7 percent Weizenbock, which means a strong wheat beer usually brewed by monks for the Lenten season.

I’m guessing the name of this beer refers to St. Vitus, the patron saint of dancers and entertainers, as well as protecting against lightning strikes, animal attacks and oversleeping.

There is what appears to be a holy man on the neck label – I can’t say I’m an expert in Christian iconography, but I think the golden halo-like thing around his head means he’s a saint.

Germans seem to have a close association with St. Vitus and used to celebrate his day in June by dancing, which eventually led people to refer to a condition that causes uncoordinated jerking movements of the face, hands and feet as St. Vitus’ dance (the true name of the disorder is Sydenham’s chorea):

So what I’m saying here is I remain clueless as to why they call this beer Vitus. Will I go into a dancing frenzy after finishing a bottle? I’ve never had that experience before with weizenbock.

This beers pours a slightly hazy golden color with a fast dissipating foamy pillowy white head. The taste is bready/malty sweet with a very nice fizziness on the tongue. The wheat gives it the unmistakable tang and whang you expect from a great Bavarian weizen. Is that a hint of citrus somewhere in the middle, hiding inside the mild clove flavor?

Down to the last few sips now, suddenly I find myself standing. My feet are tapping and I can hear Gene Kelly singing “Gotta Dance!”

Ooh, St. Vitus, you dirty old bastard, you can’t include Cyd Charisse in on this?