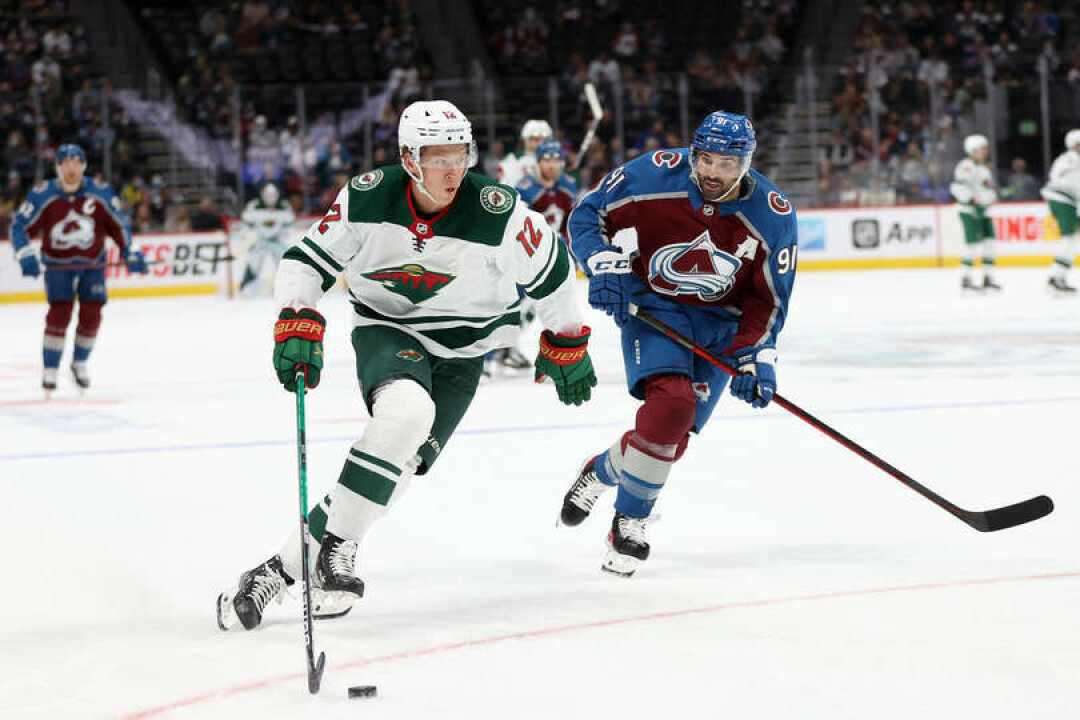 Matt Boldy of the WILD in game action versus the Colorado Avalanche in a 6 to 4 loss.

The Avs came out on top by a 6-4 score, and it was a seesaw affair until late in the third when the Avs went up 5-4 before adding an ENG for the final score.

This contest was quite entertaining, though, for a preseason match. A couple of WILD youngsters continue to impress and increase their opportunity to be on the big club roster at the end of camp.

Upon returning from Denver, the team made some roster cuts on Friday. Three D-men and a Center were waived – Mermis, Czucman, Hicketts and Shaw were put on the waiver wire – while D-man Fedor Gordeev was sent outright to the Iowa WILD.

Later in the day, forwards Bitten, Cramarossa and Turgeon were also reassigned to Iowa.

On Saturday, the waived players all cleared waivers and were promptly reassigned to Iowa.
At this writing, these players are still at the main camp:

As I have mentioned previously, the last handful of selections are the ones that are the hardest to make. This WILD camp will be among the toughest ever in that regard.

We all know who has already secured a spot on the team. Of the 23-man roster (14 Fwd-7 D-2 G), it’s my feeling there are three forward spots up for grabs, a decision needs to be made on one D-man reassignment, and we know that Talbot and Kahkonen will remain with the big club.

The third netminder on the depth chart, Andrew “the Hamburglar” Hammond, will be destined for Iowa but is still at the main camp at this time.

So, there are five decisions to be made here.

On the D-man reassignment, in my current view, it will be either Addison or Merrill. There isn’t much separation between the two at this time. I feel the club will opt for the veteran experience of Merrill but that Addison will be the first call up if and when another D-man is needed.

Out of the forward group, I’m going to be bold here. I am because I believe the front office also sees a need to do so at this time. The same-old, same-old in St. Paul has to be challenged and changed.

As much as was written about high draft choice Marco Rossi before camp, and his desire to make the big roster, I don’t feel he has done enough to win a spot. In addition, he just missed an entire season due to his medical situation. The individual skills are very evident, but they aren’t translating into game production.

As for his 200-foot game, he has things to learn. Taking the long view, it won’t hurt him to go to Iowa, play in the “A” and gain valuable experience. He’ll benefit from it down the road.

Victor Rask hasn’t impressed in camp. Usually, a player with his sized contract stays in the show, but I think the WILD is done with that. Plus, they would gain a little more than a million in cap space to make this move, and I believe he will get reassigned.

Will he make it back to St. Paul at some point? Maybe, but I don’t see that as a given.

To the team’s benefit, he is in the final year of his current contract. Will he be motivated to get another deal? Possibly, but that won’t be with the WILD.

If he does elevate his game, perhaps the team could move him before the trade deadline. His contract versus his production eliminated any opportunities for the team to move him recently. If he can play halfway decent, perhaps he could be moved, but it’s more likely the club lets his deal expire.

Connor Dewar has turned some heads in camp, but as a young player with little experience in the National, he is likely headed for Iowa.

And finally, rink rat extraordinaire Kyle Rau. The Minnesota native and former Golden Gopher star is stuck in hockey in-between land. While he gets injury call-ups during the season, he usually gets third and fourth line assignments.

And unfortunately for him, he usually doesn’t have the type of games that would make his GM and coaches sit up and take notice. He is a very hard working and effective player and does his job when called on. But this guy can’t get a break and stick on the big club roster.

He is one of those Minnesota hockey guys, though, that if he had a date with the most beautiful girl in town but heard there was a pickup game of pond hockey going on nearby, he’d try to get out of the date.

He is a hockey guy through and through.

Whether they stay will be up to them and what they bring to the team. It’s going to be an interesting week no matter what!

The team will also play STL on Wednesday eve and have a home/home with CHI on Thursday and Saturday. The final roster will be cut down shortly after, and the team will retreat to the Twins Ports for practice, meetings, and team bonding events before the regular-season opener in Anaheim.

THE MINNESOTA TWINS season has come to a merciful conclusion. They finished in last place in the AL Central division, 13th of 15 teams in the AL, and 23rd of 30 clubs in MLB.

What did they accomplish this season? Nothing, as in nothing.

I’ll admit I’m not as astute an observer of MLB as I am of the NHL, but after the conclusion of the NHL tourney, I took in a fair amount of baseball. And from what I could see, I’m somewhat uncertain of what, if anything, the team did this year to move them ahead in the future.

There is also a dark cloud forming over the team in the name of Byron Buxton, who will need a new deal soon.

He is considered the Twin’s most valuable asset but has been injury-plagued throughout his career thus far.

I have concerns this weekend after hearing a broadcaster compare Buxton to David Ortiz, a star player who began with the Twins, could not get an extension done, and left, only to become a major star for the Boston Red Sox. He went on to win three World Series, along with being the 2013 WS MVP.

Please, I don’t want to see this twice in my Twins-watching tenure!