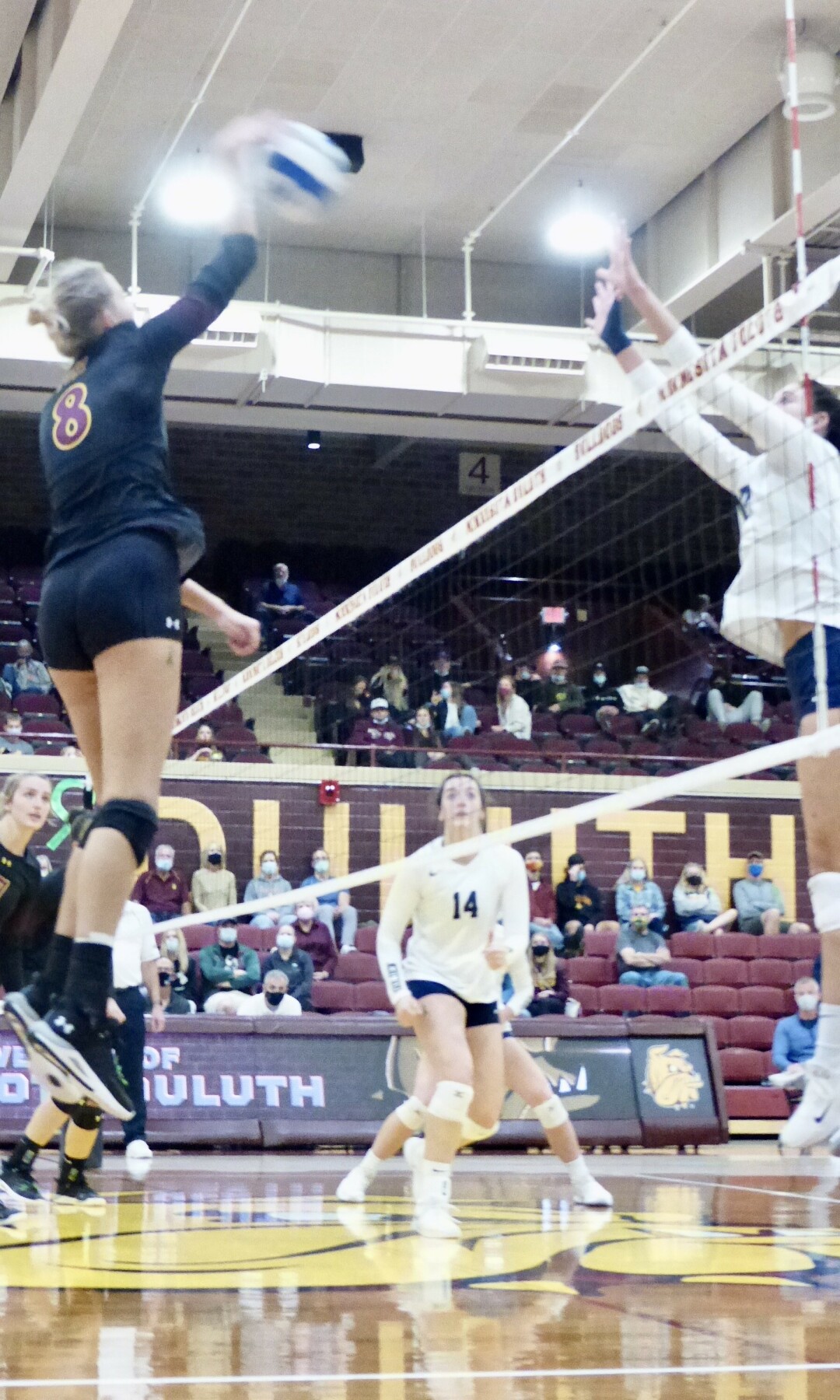 UMD’s Grace Post went high for an attempted kill, only to find Concordia’s blockers were vital to a 3-2 victory. Photo by John Gilbert.

In the old days, when UMD and Minnesota collided in women’s hockey it was always a tight, tense and emotional affair, often with the WCHA championship hanging in the balance.

This weekend, the 2021-22 versions of the Bulldogs and Gophers will battle at AMSOIL Arena in the second weekend of league play, and there stakes are again high.

In the first weekend, UMD was flying high as they went to Mankato to face Minnesota State Mankato, and soared even higher by winning 7-0, but they were brought back to earth with a thud when the Mavericks upset them 4-2 with an empty-net goal in the rematch.

The suggestion here last week was that the circumstances were perfect for just such an upset, but coach Maura Crowell and star players Gabbie Hughes, Kylie Hanley and Naomi Rogge, among others, insisted the players were totally focused on Mankato and not looking ahead to the Gophers.

It was also suggested that a huge and pivotal opening weekend series would be at Ridder Arena, where Ohio State – my pick to win the WCHA this season – would open at Minnesota. The Buckeyes invaded and swept a pair of 4-2 games from the Gophers.

That is certain to leave the Gophers less than agreeable when they invade AMSOiL to face UMD at 6 pm Friday and 3 pm Saturday, because both teams must realize that if they get swept this weekend, they might be out of title contention after only two weekends.

The Gophers also are still smarting from being overlooked by the NCAA selection committee last year, when Wisconsin, Ohio State and UMD were selected. UMD finished second to Wisconsin by two points when the Badgers beat the Bulldogs in AMSOIL on a nail-biting final rally.

But in the WCHA tournament semifinals, while Wisconsin edged the Gophers 5-3, Ohio State bludgeoned UMD 7-2. Wisconsin went on to win the NCAA title, beating Northeastern, which had beaten UMD 3-2 in as stirring semifinal out in Erie, Pa., while the Gophers sat at home, watching on TV.

For the record, that was the first time in 11 years the Bulldogs had reached the Frozen Four – and it also was the first time the Gophers had failed to make the NCAA tournament after 13 straight years of getting there. The Gophers also had made it 18 of the 19 previous years.

The Gophers started varsity hockey two years before UMD and the rest of the WCHA started women’s programs, and while UMD shocked the hockey world by winning the first WCHA title and playoff in its first year of operation under coach Shannon Miller, it wasn’t until the next year, 2000-2001, that the NCAA started holding a national women’s hockey tournament.

UMD went on to stun the hockey world again by winning the first three national tournaments, and went on to add its fourth NCAA title in 2008, and its fifth in 2010 – five national titles in the first 10 years it was held.

The Bulldogs haven’t won a sixth, but Minnesota has. The Gophers won their first title in 2004, scoring four goals in the third period to beat Dartmouth 5-1 and Harvard 6-2.

They won it again in 2005, when Natalie Darwitz, just brought back as an assistant coach to Brad Frost this year, scored a hat trick and recorded nine points as the Gophers again beat Dartmouth and Harvard in the Frozen Four – Darwitz winning the tournament MVP and Wendell winning the Patty Kazmaier award for a 36-2-2 season.

The Gophers claimed their third NCAA title, but not until 2012, beating Wisconsin 4-2 at AMSOIL Arena in the title game, then the Gophers beat Boston University 6-3 in the 2013 final, at Ridder, to complete an incredible 41-0-0 record. That year, the Gophers had to beat North Dakota in three overtimes in the NCAA quarterfinals, and beat Boston College in overtime in the semifinals.

That 2013 season was when Minnesota recorded its fourth national title, but the University of Minnesota – possibly chafing at the thought of their “Duluth Branch” already having five titles – decided to declare it was the fifth Gophers national championship!

For those who weren’t paying attention back then, the American College Hockey coaches association had put together three invitational tournaments for Eastern colleges, who already had been playing women’s hockey. Those were in 1998, 1999, and 2000.

The Gophers, who had lost the WCHA title and the WCHA tournament title to UMD for the right to be the lone Western team at the invitational four-team tournament, negotiated their way into another Western invitation, and beat UMD and won the 2000 tournament.

Nobody pretends that was a national tournament, or an NCAA event, decided nobody would notice if they surreptitiously started counting that invitational title among their national championships.

Of course, they have to perpetrate the fraud by updating it. So when they won their fifth championship in 2015, they declared it was their sixth, and when they repeated as NCAA titlist in 2016, they claimed it was their seventh title, while it was actually the sixth, of six, Gopher championships.

None of that matters this weekend, naturally, because both teams have more urgent business at AMSOIL Arena.

As college hockey takes over our consciousness, the men’s play has begun as well, and UMD, after an exhibition 4-2 victory over Wisconsin at Chippewa Falls last Sunday, plays at Bemidji State Friday, then comes home to AMSOIL to complete the set Sunday.

But the biggest surprise of the young men’s season came when Minnesota State-Mankato went out to Amherst, and shocked defending NCAA means’ champ Massachusetts 2-0.

In the second game, Massachusetts jumped ahead 3-0, but Mankato stalked back with a goal in the second period and five unanswered goals in the third to win 6-3 for a sweep.

That vaults the Mavericks into the No. 1 rank in the nation, up from fifth to displace Mass-Amherst. St. Cloud State, the NCHC preseason favorite, is No. 2, and as if on cue, will face Mankato this weekend in a renewal of one of the state’s best college rivalries in all sports. St. Cloud State beat St. Thomas twice last weekend, but after a 12-2 drubbing at St. Cloud, the Huskies had to battle to win 2-0 at Xcel Energy Center in the rematch.

Just like that, college hockey – men’s and women’s – crowds the sports scene that is already overflowing with the fantastic baseball stretch run that saw the Yankees and Red Sox both need last-batter rallies in their 162nd and final games on Sunday to reach their Tuesday Wild Card playoff game – knocking out the hopes of Toronto and Seattle on the last at-bat of the last day.

At Romano Gym, the UMD volleyball team faced two tough foes last weekend, beating Minnesota State Mankato in three straight on Friday night, then staging yet another in the ongoing rivalry with Concordia of St. Paul, the unquestioned best program in the nation among Division II teams.

That battle seemed to be going UMD’s direction for most of the afternoon on Saturday, too.
The Bulldogs won 25-23 in the first set, and when Concordia won 25-19 in the second set to square the match at a set apiece, UMD played its most determined in the third set, leading all the way to claim a 25-17 victory and a 2-1 lead in sets.

In the fourth set, UMD had problems with Concordia blocks and fell behind 19-10 for a challenging 21-18 tally, before Concordia gathered itself to finish off a 25-21 decision to even the match at two sets apiece.

The key was Concordia’s ability to stifle UMD’s offense, scoring with 15 team blocks to 8 for UMD. Not a big margin, but the match itself was tight, and Concordia’s great team balance and blocks at key times was the difference.

UMD goes on the road with a 3-3 NSIC record and 10-4 overall, and continuing to progress toward being a contender in the toughest league in the nation.

By the way, not to gloat, but it was suggested here last week that the Vikings shouldn’t celebrate too much about whipping Seattle, because Cleveland was coming to Minneapolis with an aggressive defense that was certain to dislodge quarterback Kirk Cousins from the comfortable pocket he enjoyed against a meek Seattle rush.

Sure enough, Cleveland gave Cousins an impressive first-drive touchdown, and nothing more, for a 14-7 sting.

And now Detroit comes to Minnesota, winless, but also with an aggressive pass rush.

Detroit could indeed have a chance to add to the Vikings woes, and following the Lions, the Vikings face Carolina, and then three of the most impressive emerging teams in the league – Dallas, Baltimore and the Los Angeles Chargers – before Green Bay and San Francisco take their turns creating challenges for the Purple.

That means the Vikings had better beat Detroit, because they will be underdogs in their six games after that.