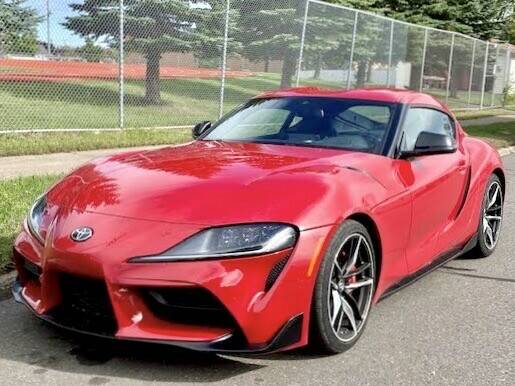 The less-obtrusive nose no longer turns onlookers away from the new Toyota Supra. Lots of grooves, scoop and vents add to the Supra’s styling. Photo by John Gilbert.

The idea that folks at Toyota are going through a “second childhood” takes root from the fact that the Japanese auto giant has hit the market with several sports coupes, convertibles and racy vehicles in the last few years. The upscale Lexus LC500 was the subject of my review here just a few weeks ago, and now, before October gets far enough along to threaten us with some foul weather, we’ve got to also check out the 2021 Toyota Supra.

The Supra is a grand old name in Toyota lore, being a stretched out luxury model of the Celica coupe a few decades ago, and it persisted as a powerful sporty cruiser with a potent Toyota in-line 6-cylinder engine and all of the company’s advancing technology. Toyota then stretched the Supra out into a “2 plus 2” model with a jump-seat behind the two buckets.

Times change, and the Supra disappeared from the U.S. market two decades ago. However, as Toyota came out with its Lexus sports cars and gave Toyota a new sports car, it also brought back the Supra name on an exotic-looking new sports coupe as a fifth-generation entry for 2020. There was a chance the Supra could get lost amid the whole array of sporty cars, almost too much to comprehend.

The look of the Supra didn’t dazzle me at first. I knew it was something of a composite vehicle jointly created by Toyota and BMW, giving it legendary heritage from two international automotive legends.

But it had this extra-prominent nose that I thought made it look, well … ugly.

Anyhow, a 2021 model of the Supra showed up for me to test drive up and down the North Shore of Lake Superior in mid-September, just before the leaves were turning color, and pure, bright red of the body was a definite attention-grabber. So, too, were the grooves and scoops and contours that pretty well obscured the nose.

The nose! What happened to the nose? The prominent beak was modified just slightly and no longer is objectionable, in my humble opinion, and you can judge for yourself from the accompanying photos.
Similar in size and intention to the LC55 Lexus, which cost somewhere north of six figures, I was pleasantly surprised to find the Supra was more like the mid-$52,000 range, which is definitely a bargain, by comparison.

Under the hood is a 3.0-liter inline 6, which could have been built by Toyota in the old days, or BMW today. It is from BMW livery, which is not a bad thing in any way. Toyota has another sports car that is a coordinated effort with Subaru, which builds the engine and platform, and I will cast my vote with BMW if you make me choose which company’s engine I prefer.

This turbocharged 6 delivers 382 horsepower and 368 foot-pounds of torque, through an 8-speed transmission directly to the rear wheels. The car handles with great precision, with a platform also taken from BMW’s engineers. You can play with the drive mode switch and get into sports settings that heighten the stiffness and the tightness of the steering and suspension, and turns the exhaust from mellow to raucous.

There are a couple of drawbacks. One is that while the bucket seats are comfortably engulfing to your body once seated inside, getting inside is another matter.

Toyota should offer a racy-looking helmet with every Supra – not because you are going racing, but to protect you from a concussion if you try to “hop in.” You climb in at your own risk, with one foot first and then a contortionist’s elasticity, or – my choice – you back in, lowering your backside until you feel that seat cushion’s comfort, then you bend, fold and staple your legs up and in, as you try to also bring your head inside.

Whap!  That’s where I dislodged my baseball cap every time, which wasn’t a problem, compared to the thunk of your head hitting the roofline. After a few tries, I got better at it, by not wearing a cap, and by scrunching my head down and back to squeeze it in without contact.

Getting out is actually easier, because you throw open the door, lean your head out, and then attempt to vault the rest of your body up and out. The thing is, it’s so impressive to be inside the Supra, you might as well just decide to stay in there and minimize how frequently you have to get in or out.

Instrumentation is clear and concise and easy to read, although setting the audio controls takes some doing. The Supra is another in the recent trend of vehicles that seems to have overlooked the convenience of a simple, easy-to-use audio system is increasingly important to potential buyers in their decision-making process. I would never advocate making a decision on such a marginal thing, but convenience is no longer a marginal factor, not when some companies make simpler controls.

All of the contemporary safety devices are on board, including front, rear and side detectors with cautioning alarms, and assistance to help you stay in your lane or not to pull into an adjacent lane if something is there.

The attraction of the Supra is readily evident to anyone driving it for only a few days. I pulled into a gas station and when I climbed out to get to the pump, I heard someone say, “Nice car!” I turned around and located the fellow who said, simply, “Supra?”

Yes, I told him, but I felt compelled to acknowledge that it wasn’t my car, but a factory test-drive vehicle that I got to test-drive for a week. The fellow decided I had the greatest job in creation, because I could drive such spectacular cars but didn’t have to pay for them. I explained how the process works, and that I wrote an analysis of the cars I get each week, but that, yes, it is a pretty special opportunity.

Another young fellow driving a car he has spent special attention tuning up pulled off the road and into a parking lot when he drove past my parked Supra. He jumped out, leaving his door open, and hustled over to give the car a close-up examination. Something similar happened nearly every time I stopped or parked the Supra.

With everything on the test-car, the price was nearly $55,000, but that’s still only about half of what the more luxurious Lexus LC500 sticker read.

And for that, you get the benefit of BMW precision in the platform and in the responsiveness of the 3.0-liter engine, singing its turbocharged song up through the rev-range. Paddle shifters help, although I found the 8-speed automatic upshifted and downshifted with surprisingly well-times shifts. That 3-liter inline 6 is also used by BMW in its own Z4 sports cars and in the 3-Series M3, affirming its pedigree.

You’re reminded of that heritage every time you choose to paddle shift up there around 7,000 RPMs, which is where the engine computer shuts off the fuel flow. That’s plenty high, and enjoyable.
Precise steering and suspension helps you always go where you’ve urged the Supra to go, and the pleasantly stiff platform also helps the suspension and steering work its magic.

There are a few other suggestions I would make to Toyota, after driving the car for a week. For one, figure out a way for drivers who might be 6 feet tall to climb inside with room to bring their heads with them.

And for another, do something about the incredibly annoying wind buffeting. Cruising on a 70-ish day means you needn’t activate your air-conditioning, but you also might enjoy opening your windows to let in the fresh air.

That works well as you accelerate, and even helps you hear the neat exhaust sound more, but as you build up revs and shift into third, and fourth, and get up to, say, 45 miles per hour, you suddenly hear a loud thrumming vibrating through the interior. If you go a little faster, it gets worse, although it doesn’t seem to be there below 45.

My question is that the same company makes that Lexus LC500 convertible, and with the top down, there is no wind buffeting. So they can’t figure out how to solve this? C’mon.

With all the computerized driving techniques available these days, Toyota not only tweaked the appearance of the Supra a bit, but it also went underneath and returned the adaptive steering, the rate of adaptive variable suspension, and the programming for the stability control.

Another wonder of the Supra is that with all those electronic things collaborating to keep you driving and steering precisely, you have no idea it’s all there. You just know it goes where you point it, and swiftly.

By the way, when I did get out for refueling, it asked for 91 octane (premium). As I’ve often suggested, that is something to take into account, because gas stations nowadays seem unflinching when they price premium fuel at 60 cents more per gallon. I got 28 or 29 miles per gallon in combined driving, heavy on city streets and hills, but if you stop and calculate how much more you’ll have to pay for a month, or a year, of fuel refills, a regular-burning vehicle makes a lot of sense.

The Supra, according to reports, is also going to offer a 2.0-liter turbocharged 4 in the Supra, which will get good power and better fuel economy. Might be worth checking.

Still, if Toyota wanted a sports car that brings to life the heritage the company seemed to abandon 21 years ago, bringing back the Supra for a fifth generation, with an inline 6 that adds BMW prestige to the picture, the 3.0 deserves all the attention a buyer wants to lavish on the selection.