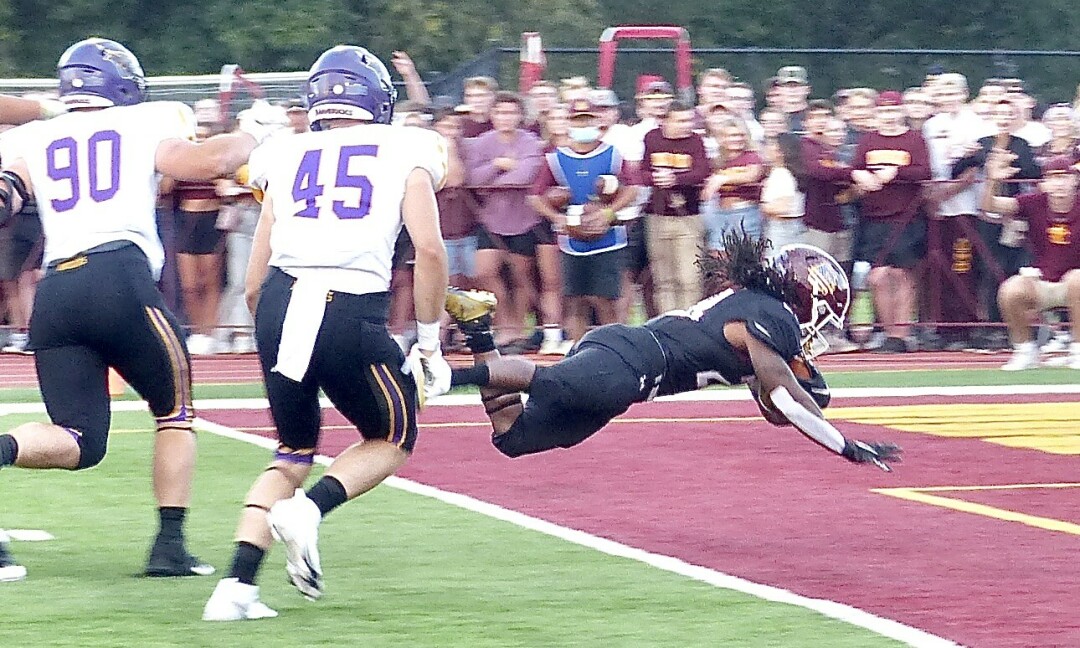 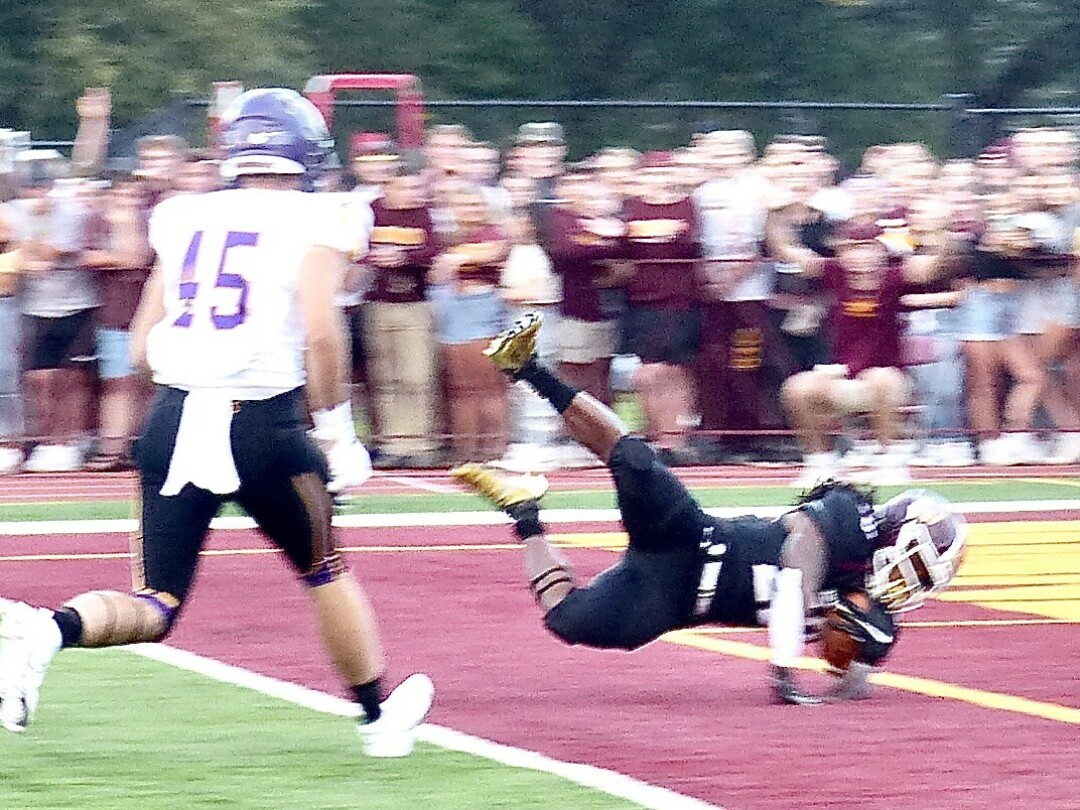 Martin Cozz became a human missile as he burst through the line and dived into the end zone for an 8-yard touchdown and a 14-0 UMD first-quarter lead. Photos by John Gilbert.

Quarterbacks. Game after game, the quarterback gets more credit than he deserves, and, when things go wrong, more blame than is fair.

But there were some amazing performances by quarterbacks in football games we could watch last weekend, whether in person or on television.

Here are some of the most noteworthy:

We could watch in person among a Malosky Stadium record crowd of 6,536 Saturday evening when UMD’s John Larson showed again exactly what a dominant quarterback can do to direct a team.

Everything was perfect for the Bulldogs as they faced a Minnesota State-Mankato team that brought a 36-game Northern Sun winning streak and the No. 1 preseason favorite role, as well as the No. 3 NCAA Division II rank to town.

Larson was 13-of-24 passing for 184 yards and a touchdown, and he ran nine times for 43 more yards and two more touchdowns as the Bulldogs stunned the Mavericks 30-10.

Larson threw to six different receivers and sent Martin Cozz and Wade Sullivan off to pace the run game, but make no mistake – Larson was the Alpha Bulldog, and he proved it on the first UMD possession. He ran for a short gain then slid to the turf to avoid contact on first down, but the Mavericks jumped on him, and one of them made a helmet-targeting hit.

That cost Mankato 15 yards and perhaps an extra dose of adrenaline from Larson, because on the next play, Larson sent Armani Carmickle down the right side and into a surprising void in the MSU defense.

Larson’s perfect pass sailed out ahead of him, and Carmickle caught it and jogged into the end zone for a 42-yard touchdown, right in front of the pep band on Military Appreciation Night.

On UMD’s next possession, Larson scrambled right and hit Zach Ojile for 48 yards to put the Bulldogs in position at the Mavericks 8.

Martin Cozz turned himself into a human missile as he burst through the line and dived into the end zone from the 8, and with 5:58 expired in the first period, UMD had a 14-0 lead. 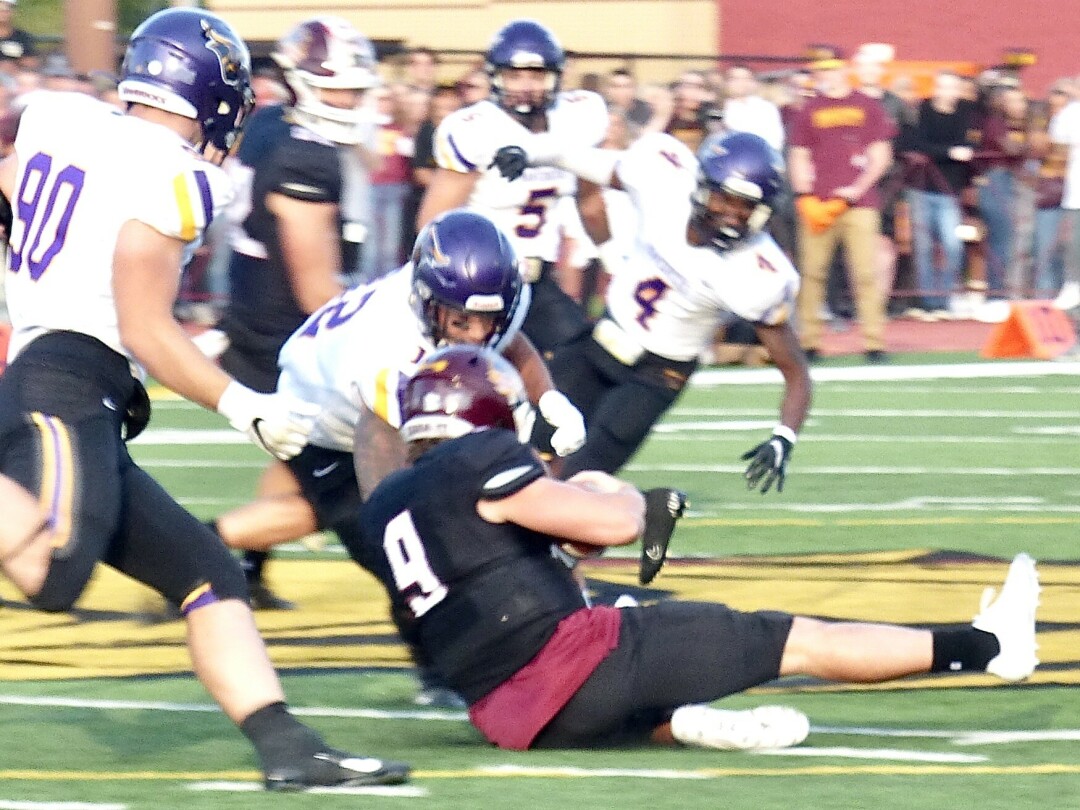 UMD quarterback John Larson (9) slid to the turf after a short gain, and he drew a personal foul when MSU-Mankato defenders hit him.

Larson ran for his first touchdown, snd Curt Cox kicked a 28-yard field goal for a 24-10 halftime bulge, but a key play came to end the half, when the stunned Mavericks tried a Hail Mary pass play, but the Bulldogs had five defenders surrounding the intended receiver at the right pylon.

That sent the Bulldogs onto cruise control for the second half, when only Larson’s second touchdown run clicked the scoreboard.

Cozz gained 71 yards in 14 rushes, Sullivan 45 more in 8 carries, and Larson third at 43, counting a couple of scrambling losses. His passes found Zach twice for 65 yards, and three times each to Carmickle, for 63 yards, Johnny McCormick, for 24 yards, and Kurtis Weigand, for 22 as the receiving leaders.

Without question, this was the biggest game of the season for the Bulldogs, but that doesn’t mean they can be overconfident this Saturday, when they play at Winona State. A loss at Winona wouldn’t be the end of the world, but win or lose, nothing can take away the great performance against Mankato.

In the NFL, the usual attention on the Vikings and the Packers was blunted because they joined the Chicago Bears and Detroit Lions in a winless opening weekend.

Aaron Rodgers scolded himself for one of his worst Packers performances, in a 38-3 blowout at Jacksonville, against New Orleans.

The Vikings took heart that Kirk Cousins caught up to force overtime at Cincinnati before the Bengals won 27-24 in overtime. But they aren’t comparable.

The Bengals have been slotted for last in their division, again, but Joe Burrouws, the No. 1 draft pick two years ago, is healthy after missing more than half of last season, and he slitted the Vikings pass defense, going 20-27 for 261 yards and two touchdowns. The Packers got to face the Saints, who are now without the retired Drew Brees, but they put Jameis Winston into action and he went 14-20 for five touchdown passes against the vulnerable Packers defense.

The predictable excellence was there for Seattle’s Russell Wilson, who threw four TD passes in a 28-16 victory at Indianapolis, and Patrick Mahomes, who was 27-36 for 337 yards and three touchdowns for a 33-29 narrow escape against a Cleveland Browns team that will be tough, as Baker Mayfield was 21-28 for 321 yards against the vaunted Chiefs defense.

Former Detroit martyr Matthew Stafford made his heralded debut for the Los Angeles Rams and couldn’t have been better – 20-26 for 321 yards and three touchdowns in a 34-14 romp against the Bears.

Stafford proved how good he always has been – if only his pinpoint passes could have been caught the way the Rams receivers did it Sunday. He had a 156.1 passer rating, best in the whole NFL.

But the two most outstanding games of the week were Tampa Bay’s 31-29 survival against a Dallas Cowboys team that appears ready to take on the NFC.

Of course Tom Brady was good, but every time he dropped a perfect pass into the hands of a covered receiver, the healthy and rejuvenated Dak Prescott matched him for Dallas.

Prescott was sensational, outperforming Brady with a 42-58 passing job for 403 yards, and three touchdowns.

But as exciting as that finish was, the pinnacle was in Las Vegas, where the perennial power Baltimore Ravens faced the Las Vegas Raiders, who were playing in front of fans for the first time at their new home in Las Vegas.

The Ravens turned loose the electrifying Lamar Jackson, who was 19-30 for 235 yards and rushed for 86 more, but they fell in overtime to Jon Gruden’s Raiders, 33-27.

Saying it was decided in overtime doesn’t cut it. Even spelling out that Derek Carr was 34-56 for 435 yards and two touchdowns falls short of explaining it.

The Ravens had led from the start, but Carr maneuvered the Raiders into range, then threw a TD pass to tie it 24-24 with 3:44 left in the fourth quarter. The Ravens made what they thought was a last-minute winning drive, and regained the lead 27-24 with 0:42 left, with a field goal after Jackson’s electrifying 28-yard scramble.

But Carr brought the Raiders close enough for a tying field goal that went through with 0:02 remaining, sending the game into overtime 27-all.

In the most amazing overtime you will ever see, Carr fired the winning touchdown pass, setting off wild celebration – until the officials reviewed it and said the ball was down at the 1, so they cleared the field and the offense went back to work for the Raiders, first and goal at the 1.

The Ravens defense stopped and push the Raiders back, so Carr dropped back and fired a bullet – which went right through the upraised hands of his receiver at the goal line, then plunked a Ravens defensive back square on the helmet, bouncing into the air, where another DB intercepted it in the end zone!

Now it was Lamar Jackson’s turn to shine again, but he was hit and fumbled at the Baltimore 27 and the Raiders recovered.

Gruden took no chances, and after one play got them in position, he sent the field-goal unit on to win the game with a medium-distance field goal on second down.

Getting organized with no timeouts was an issue, though, and the Raiders were penalized for delay of game. The extra 5 yards made Gruden think again, and since it was only second down, he sent the offense back out to reclaim the lost 5 yards.

But with the ball on the 31, Carr stunned the Ravens defense and everybody else in the stadium by sending Zay Jones out on a diagonal pattern toward the right, and while the Ravens ignored Jones, Carr lobbed a 31-yard pass right to him to win the game 33-27.

It used to be you had to ponder how anybody could break into the top-5 veteran superstar quarterbacks in the league.

Now when you wonder who is the best and most exciting quarterback under pressure, you’ll need to evaluate at least 20 brilliant challengers.

• The Pac-12 came through big-time last Saturday, thanks to Oregon’s mighty Ducks, who went into Columbus and beat Ohio State to vault up into the top 5 in the fickle national ratings.

• That came after a remarkable twist in the Pac-12, when UCLA upset Southern California 42-28, a huge victory for coach Chip Kelly’s Bruins, and a loss that prompted USC to fire coach, Clay Helton, whose Trojans had won the Rose Bowl in 2016, and the Pac-12 in 2017.

• Donte Williams moves up from associate coach to take over while the high-profile school conducts a search. The upsurge in Pac-12 parity in recent years is what prevented Southern Cal from its normal domination, but the administration lost sight of that in the face of impatient boosters.

• Paul Holmgren, one of Herb Brooks’s original recruits who helped the Gophers win their first NCAA title in 1974, went on to play for the Minnesota Fighting Saints, then had a solid career with the Philadelphia Flyers and later coached and managed the Flyers, has been inducted into the U.S. Hockey Hall of Fame’s Class of 2021.

• The UMD volleyball team opens its home schedule Friday at 6 p.m. against Wayne State, and comes back to face Augustana at 2 pm Saturday, as the rugged Northern Sun volleyball chase begins in earnest.