Loaded LC500 drops its hammer and its top 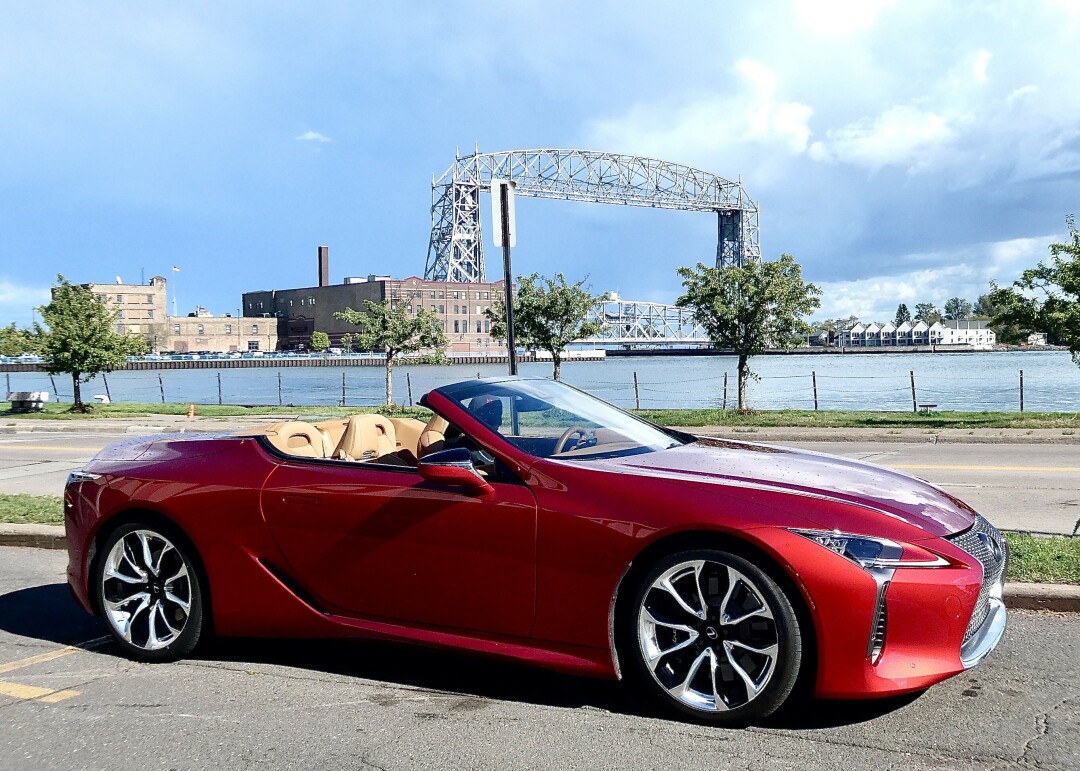 Given a choice, would you prefer to own a high-performance sports car with power and handling worth six figures of sticker price, or a stunning, great-looking sports car that froze passersby in their tracks every time you drove past?

The answer, of course, is both. And the provider of this spectacular vehicle with mind-blowing attributes may surprise you by coming from Toyota. Known almost exclusively for its steady, durable and intelligent engines and vehicles, Toyota has tried to make inroads into the higher-performance segments in the last couple of years, mostly through its upscale Lexus nameplate.

And that’s where they’ve struck paydirt, with the Lexus LC500.

That badge has been the ultimate, for Lexus, but for 2021, the plateau of excellence has been raised on several counts.

First, it’s a convertible. The LC500 is great looking as a coupe, but goes from attractive to spectacular with the hooding of a console button that executes a mechanical coordination of erector-set inner parts that raise the rear deck, then lift off the sleek roof and drop it into the rear compartment before uncoiling the mechanical parts and latching the decklid over the whole thing.

It takes about 12 seconds for the whole process, which means you can easily put the top down at a stoplight. More importantly, if you’ve been driving top-down and avoiding the threatening sprinkles, you can put the top back up in the same brief mechanical flurry to keep you dry at the next stoplight.

The test LC500 came in “Infrared,” a sizzling metallic red that reflects every meaningful bit of light back at your receptive eyes. Somehow, convertibles look better in red, and red looks better in Infrared.

Toyota also straddles the fine line between being accused of building a great engine and then using it for too long as the years pass by, and by polishing the existing engine to stay up with the changeable environment in engine-building.

The LC500 gets Toyota’s well-proven 5.0-liter V8, but it’s not an outdated piece. It gets new life as a 471-horsepower V8 under the hood of the sleek convertible, and it gives you all the performance you might have thought was unreachable for such a luxurious vehicle.

Lexus will use that same engine in a couple of other luxury sedans for the upcoming model year, as well.
In the LC500, the engine runs through a 10-speed automatic, and if the power comes on too smoothly, you can use those long, readily-reached paddles on either side of the steering wheel to upshift and downshift whenever you choose.

And your choice can be altered by a simple clicking of a console toggle switch that shows you on the instrument panel that you can keep clicking until you get comfort, economy, or sport, or sport-plus.
Sport tightens up the steering and suspension, and sport-plus does it moreso, and along with the handling enhancements, you also get a nice, mellow roar of power.

While Toyota advertising has only recently gone onto a campaign to rave about its cars and their sportiness, showing, for example, people virtually street-racing across bridges and around parking ramp circular exits, they’ve put their engineering where their campaign fauns are on the LC500.

In fact, Lexus engaged Yamaha to provide and tune the active adjustable dampers on all four corners.

Exceptional bucket seats support you no matter how hard you push the suspension, or power around a tight curve, and a thick, grippy steering wheel fills your hands and encourages you to experiment with the handling.

If that’s a brief overview of how the LC500 fills both the requirements of power and performance as well as being clearly the best-looking vehicle ever built by Lexus, the other element of such a creation is the sticker price. It is a lot.

Everybody who asks wilts at the thought of any car costing that much, which causes me to explain that when you get all that is offered on the LC500, it is probably worth the high price.

In the battle for superlatives, save a few for the Mark Levinson audio system, which is a premium sound device with possibly the best separation of sounds I’ve heard in a car, playing through a 13-speaker surround unit that gives you radio, satellite radio, Bluetooth, MP3, and even a CD player.

We folded my older son, Jack, into the very tight, very small rear seat – at his own choosing – and as we drove up the North Shore and down to St. Paul to the Minnesota State Fair, as well as catching one of the closing weekends at Gordy’s Hi-Hat Drive-In in Cloquet, we continually marveled at how fantastic the sound system was.

These days, a lot of performers rerecord their top tunes onto new albums, and several times we wondered if we were listening to new versions of old songs. But we weren’t. We were hearing all the sounds that had been previously suppressed by lesser sound systems, including in our home.

That is not to say everything is perfect in the LC500, even at its steep price.

The long console has a palm pad and a mouse panel that you can use to summon up all the various controls on the center stack’s 10.3-inch display. But it often was reluctant to respond promptly to my fingertips, and other times it seemed hyper.

Often, both extremes came together, such as when you were trying to scroll up to reach a satellite radio station, and as you would go up, up, and up, suddenly it would switch to AM.

If we owned the car, I’m sure we’d get used to its idiosyncracies, but as it is, every time we wanted to tune the radio it was a source of frustration.

The latest news from JD Power, by the way, tells us that the latest Initial Quality survey of new cars calculates the adjusting of electronic controls right along with power, performance, handling, comfort and convenience.

Personally, I don’t think that’s proper. If an aftermarket company installs an audio, climate control or cell-phone connectivity system that is needlessly complex, I don’t think such nuisances should be gauged with a vehicle’s operation.

My suggestion to JD Power is to exclude the audio and connectivity controls from all the other new-vehicle operations in the calculation, and then conduct an entirely separate poll to determine which vehicles have the best and worst operational process.

With the LC500, you can get around the situation by putting the top down, switching to Sport, and then turning OFF the audio system as you drive off over the horizon – poorer, maybe, but well-satisfied.