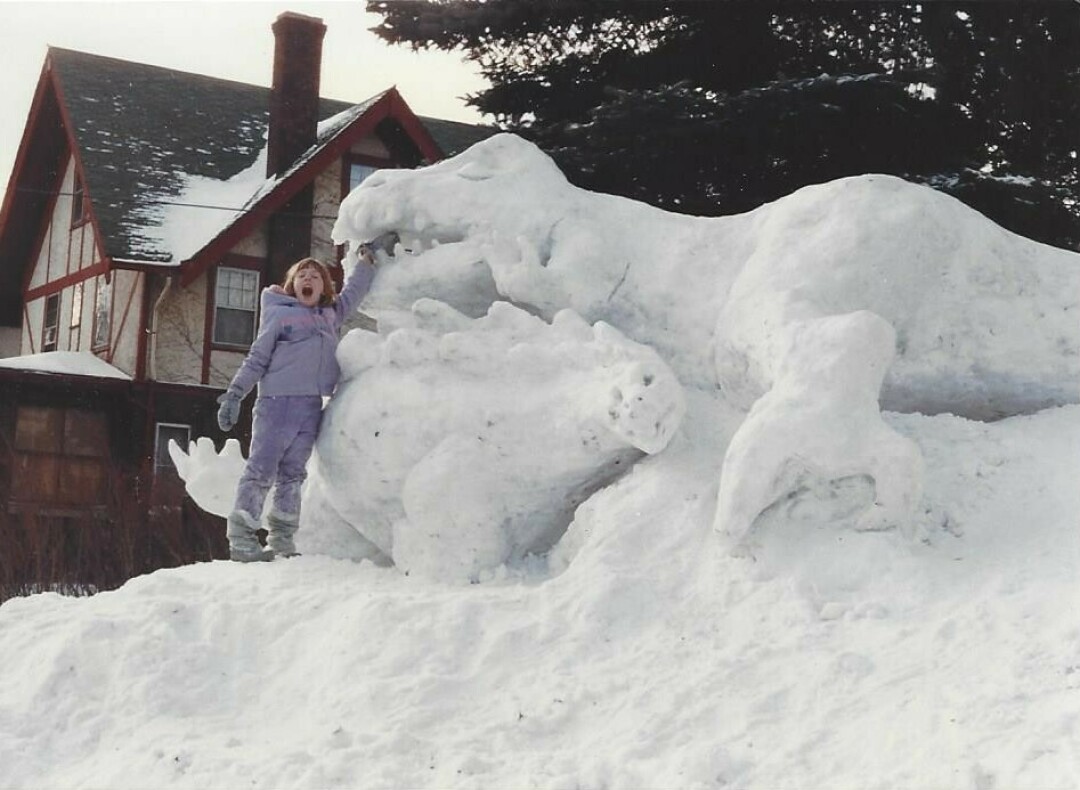 Jesus was in the Wilderness 40 days. Churchill was in his between World Wars 1 and 2. I’ve been there twice.

Most significant was my estrangement from the Party of Lincoln in 1992. But before that I wandered the wilderness after losing my third teaching job in 1987, until I was finally elected to the school board in 1994.

My first wilderness experience coincided with my daughter starting first grade and my becoming a house Dad. We had just moved to 21st Avenue East. Without a job I was keen to fulfill her request: “Daddy, make me a snow dinosaur.”

Cunning man that I am I decided snow sculpting might help make my rehabilitation possible. A few months earlier I had told my father on his death bed that despite having lost three teaching jobs I was thinking of running for the school board. The look in his eyes and the skepticism in his voice haunted me for years.

I wasn’t done with education. Something had to be done for the kids in my classes who read and wrote far below grade level. That led me to author Jack Trelease and his Read Aloud Handbook. I would read copiously to my children.

I became a regular at Chester Park Elementary PTA meetings and was invited to become secretary only to have the offer conveniently forgotten. I always suspected rumors of my teaching failures gave someone second thoughts.

That didn’t stop me. I was a room parent, read to classes, led Junior Great Books groups and became the games chairman of the newly organized school carnival. My enthusiasm would lead to my first-grade son forbidding me from ever visiting his class again. I had worn a Ninja Turtle mask in every classroom to invite everyone to the new carnival. My son was mortified, a condition he endured until graduation 12 years later.

My greatest success was the maze I constructed out of 30 cardboard appliance boxes. It returned annually until Chester Park closed.

Just two years after losing my last job I would run for the school board and I had a cause. A referendum for new schools and repairs was offered to Duluth voters. I wrote an impassioned op-ed in favor of it in the Tribune. But when it was defeated the school board decided to close Washington Junior High, where I had taught in 1984.

I was appalled. I circulated a petition that garnered several thousand signatures to offer an excess levy to fund the school’s continuance. When my toothless petition was ignored by the board I was infected with the common malady – distrust of the powers-that-be.

My 1989 run for the board didn’t make it out of the primary. It would be followed by two more defeats. In these campaigns I mailed painfully earnest evaluations of public education to several hundred of Duluth’s most influential leaders. I hoped to generate buzz. I got a yawn.

By the time I filed for the school board again in 1994 I had six defeats at electoral office under my belt – three for the school board, two for the legislature, and one for Congress. Despite this, I was rescued out of the blue by a couple seasoned pros. Republican Bill Ulland and his Democratic buddy Patty McNulty offered to be my campaign managers. There was one condition. I was to do exactly what they said. They didn’t want a repeat of my juggling tennis balls on the debate stage. I gladly agreed. They put their names on the line, raised money, and got me elected. I did break my promise to them in one detail.

While a candidate myself, I became the unofficial manager of another school board candidate’s campaign. Before filing I’d heard rumors that an African American woman, Mary Cameron, might run for the 2nd district seat I had my heart set on. Duluth hadn’t had a black elected official for almost 20 years. I called Mary up to have a cup of coffee. If she wanted it I planned to offer her the smaller district seat and run, once again, for the city-wide at-large seat that I had already lost three times. To my relief Mary planned to run at-large.

We were both elected and became thick as thieves until the Red Plan. We had a lot in common. For a start, Mary graduated from Duluth’s Central High in 1969 the same year I graduated from Mankato High. Central’s Basketball team had defeated Mankato for third place in the 1968 Minnesota Basketball Tourney.

On election night my daughter, now in seventh grade, was asked what it felt like to have her dad win an election (his seventh): My daughter put it succinctly. “Well,” she explained, “I won’t have to wear a paper bag over my head in school tomorrow.”