Authors shine lights in the dark with ‘Science’ series 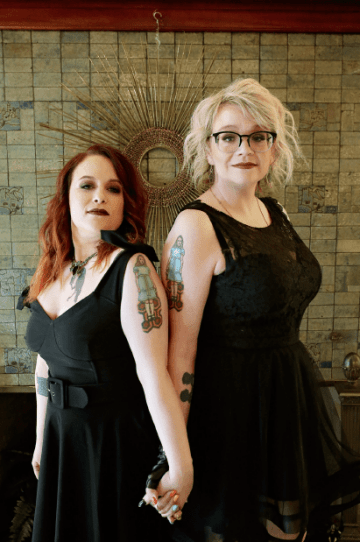 Meg Hafdahl and Kelly Florence are working on the fifth book in their The Science of ... series.

It’s easy to tell that authors Meg Hafdahl and Kelly Florence have their readers first in mind when collaborating on a book.

“For this one it was, what should we write about next, and we were thinking, Well, true crime,” Kelly said in a tag-team interview with The Reader. “There’s so much true crime that horror movies are based on that people don’t realize they’re based on fact and, and we always say, you know, truth can be scarier than fiction a lot of times, and especially with this book. We realize these are the real monsters and they’ve lived among us. Yeah, I mean, we’ve written about vampires and witches and all those things, and those are fun, but there is just this whole other level of horror when, you know, even something simple as one of my favorite Hitchcock movies is Rope, and during the research on Leopold and Loeb who the movie is based on, was you know something I certainly didn’t know or understand the first time I saw Rope. So rewatching it with that lens adds this whole other level of empathy and understanding.”

And horror, I add.

As a fan of horror and true crime, I went into The Science of Serial Killers a bit skeptical. Are they going to be able to surprise me with information I have not read somewhere else or seen in a documentary or movie about serial killers?

Hah! No worries there. They have this down to a science, always with the idea of finding a new thread to pull on stories that appear to be threadbare through retelling.

Really, what new is there to say about Jack the Ripper? Hafdahl and Kelly admit that the mystery of Jack the Ripper will never be solved, but they have us think about the vulnerable women who were the Ripper’s victims, and they note that the movie From Hell (2001) attempted a humanization of the victims by presenting a true picture of “the suffocating world they lived in.”

“Oh my gosh, yes, you know, we really don’t want to talk about stuff that is really well known, or that everyone already knows,” Meg said. “We really like to kind of go deep and delve deeper into the things that interest us and so we’ll kind of pull that thread. And I know I learned so much. One interesting topic was the Highway of Tears in Canada (Chapter 23 in the section titled Never Caught), where missing Indigenous women is an epidemic, and I know that’s not something that’s discussed here in America very much.”

The authors point out that if “pressed to name a serial murderer,” most people would name that quintessentially American serial killer Ted Bundy. After all the books, documentaries and movies, is there anything new to learn about Bundy?

Hafdahl and Florence put forth an idea I’d not heard before – that perhaps the apparent abundance of American serial killers like Bundy is due to an environmental factor such as lead poisoning. They say “There is a plethora of studies” proving that lead in the brain leads to violent crime. A decrease in lead poisoning has coincided with a decrease in violent crime.

Each of the chapters is peppered with slightly Victorian looking factoid pullouts, such as this one in the Jeffrey Dahmer chapter: “In an attempt to create ‘zombies,’ Dahmer bored crude holes into some of his victims’ skulls and poured in muriatic acid. Not surprisingly, it didn’t work.”

So how do they decide on the division of work for a book such as this?

“We know where our passions lie, and, and know the things that we want to learn more about, or we already know a lot about. And then we, we divide it up that way, and so we get to write about things that we really love,” Meg said. “Or really go down the rabbit hole. Like I have been obsessed with Lizzie Borden since I was about eight years old, so that was just a given that I was gonna do a chapter on her, and thankfully Kelly let me have that one.”

Dare I say it? The Science of Serial Killers is a fun read, and it is the context these two provide in the details that makes it fun.

Besides looking at the science behind serial murders and their portrayals in movies, they have taken the unique approach of interviewing someone with special knowledge about the subject they are covering.

Having worked at several daily newspapers in northeastern Wisconsin as the A1 page designer, I have vivid memories of stories such as the night Jeffrey Dahmer was caught and the stream of AP photos that came across the wire of hazmat-suited police officers rolling barrels of of human remains out of Dahmer’s Milwaukee apartment.

But I had completely forgotten about the horror that was Danny Rolling until I reached Chapter 16, titled “Scream (The Gainesville Ripper), and then the memories of that horrific time came flooding back.

Yeah, the fall of 1990, and some nut in Gainesville, Fla., was killing college students – five in total – and posing their bodies in ways that made hardened police officers gasp. Before he died by execution in 2006, Danny Rolling admitted to three other murders in Shreveport, La. The movie Scream (1996) was based on the Rolling murders.

The full title of this book is The Science Behind Serial Killers: The Truth Behind Ted Bundy, Lizzie Borden, Jack the Ripper, and Other Notorious Murderers of Cinematic Legend.

It’s broken into 10 sections, beginning with Crimes of the Past – which includes chapters on Lizzie Borden, Jack the Ripper and H. H. Holmes – to The Strange – with chapters on Ronald DeFeo Jr. (The Amityville Horror), Albert DeSalvo (The Boston Strangler) and Joe Ball (Eaten Alive):

In between are all your usual suspects – Bundy, Dahmer, Gacy, Manson, Son of Sam, Eileen Wuornos, BTK, John Christie, Henry Lee Lucas – and some less well known – such as the unknown perpetrator of the Lake Bodom murders in Finland and Amy Archer Gilligan, to whom we owe the story Arsenic and Old Lace.

When it comes to the science part of the book, they look at scientific aspects of each case, but also just add in some fine details such as this from Chapter 25: The Strangers (Charles Manson): “What is happening to our brain when we get scared? First, the amygdala scans for threats and signals the body to respond. Next, our brain stem may trigger a freeze response while our hippocampus turns on the fight-or-flight-response. Our hypothalamus signals our adrenal glands to pump hormones and our prefrontal cortex interprets the event and compares it to past experiences. Finally, our thalamus recipes input from the senses and ‘decides’ to send information to either the sensory cortex (conscious fear) or the amygdala (Defense mechanism):”

“We are already are working on our fifth book, which is the science of witchcraft,” Kelly said. “We’ve already interviewed such an amazing variety of people from all sorts of walks of life, and not just about witchcraft itself but sort of these peripheral topics that come up, like for example there’s an indigenous botanist who talks about the healing properties of plants, because a lot of movies about witchcraft have spells and potions, so we looked at the real science of that and it’s fascinating.”

In addition to writing together, the two women also co-host the Horror Rewind podcast. Kelly also teaches communication at Lake Superior College in Duluth. Meg now lives in Rochester and is her female-driven horror fiction includes the novels Her Dark Inheritance, Daughters of Darkness and the short story series Twisted Reveries. 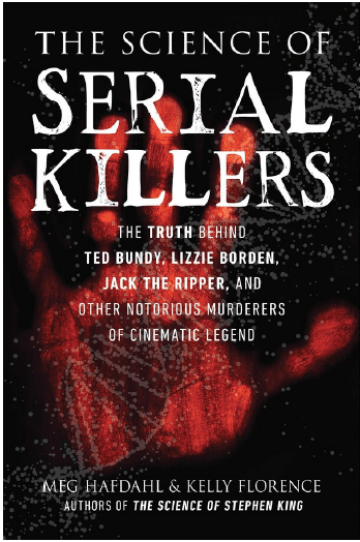