Falling for a femme fatale 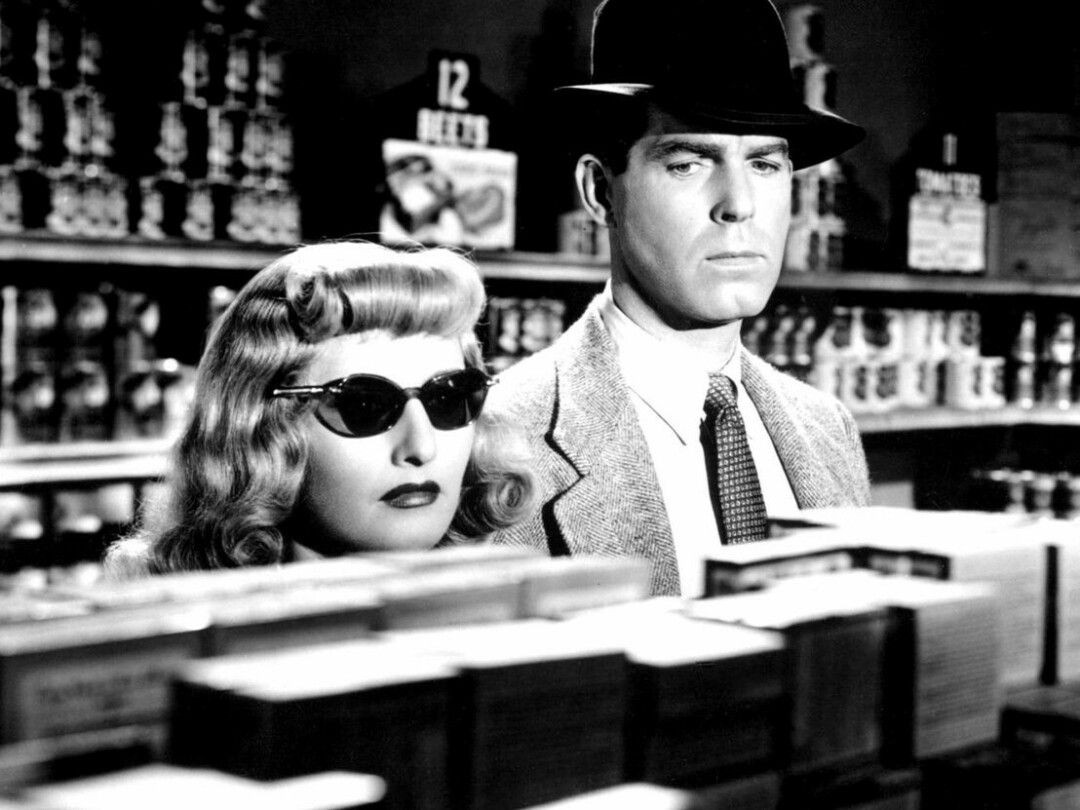 Has any man in the history of movies been a bigger sap than insurance salesman Walter Neff?

Neff, you’ll recall, is the sad sack in Billy Wilder’s Double Indemnity (1945), who falls so completely for another man’s wife that he kills the husband in a scheme of the woman’s devising.

The scene where Neff, hiding in the backseat of the car, rises up to strangle Mr. Dietrichson focuses not on the murder but on the almost emotionless face of the wife, Phyllis Dietrichson (played by Barbara Stanwyck in a hideous blonde wig): The only reaction we see is a glisten in her almost feral eyes as she listens to her husband’s death gasps. It’s a powerful scene.

Wilder and veteran cinematographer John Seitz pretty much wrote the book on film noir chiaroscuro lighting in Double Indemnity. The characters spend much of their time in the dark. It’s the world they live in. When Neff and Phyllis agree to meet in a clean, well-lighted grocery store, they look alien in that bright environment and are obviously uneasy in daylight. They chose a world of darkness as soon as they opted for murder.

The story is taken from a 1943 James M. Cain novella – which was based on an actual 1927 murder – and the screenplay was written by hardboiled novelist Raymond Chandler and Wilder.

The story is that Chandler and Wilder had a very troubled relationship in the four months they worked on the screenplay. That could explain why Wilder’s next movie was The Lost Weekend, about an alcoholic writer.

But what a script. It’s been 77 years since this movie was made, but the story stands up and the dialogue is full of the kind of snap, crackle and pop you would expect from such distinguished company. One reviewer described the dialogue as “tart as a lemon.”

Word is that much of the dialogue came from Chandler and Wilder rather than from Cain’s book. His words didn’t translate well to the screen.

However, Cain thought it was the best screen rendition of his work (which includes two other classic noir films – Mildred Pierce and The Postman Always Rings Twice): Some consider Double Indemnity to be the best example of film noir in existence. Some say the French developed the term after seeing this movie.

The story is told in flashback as the dying Neff relates the dismal tale of his easy downfall that began the moment his eyes fell on Stanwyck’s towel-clad body and then on her jangling anklet as she walked down the stairs to meet him.

Neff is an aggressive insurance salesman who has stopped by a guy’s home to get him to renew his car insurance, but finds only the maid and the naked, bored housewife at home.

Neff makes so many references to the anklet that jangles on Stanwyck’s ankle as she walks down the stairs that I had to Google woman’s ankle bracelet (or anklet, I learned), to find that it is apparently common knowledge that a woman wearing an ankle bracelet is either advertising that she is available or in an “open” marriage, which is the same thing, I guess. Hmmm. The things you learn watching movies.

But let’s take a look at the double entendre dialogue they engage in upon their first meeting:

NEFF: I wish you’d tell me what’s engraved on that anklet.
PHYLLIS: Just my name.
NEFF: As for instance?
PHYLLIS: Phyllis.
NEFF: Phyllis. I think I like that.
PHYLLIS: But you’re not sure?
NEFF: I’d have to drive it around the block a couple of times.
PHYLLIS: Mr. Neff, why don’t you drop by tomorrow evening about eight-thirty. He’ll be in then.
NEFF: Who?
PHYLLIS: My husband. You were anxious to talk to him weren’t you?
NEFF: Sure, only I’m getting over it a little. If you know what I mean.
PHYLLIS: There’s a speed limit in this state, Mr. Neff. Forty-five miles an hour.
NEFF: How fast was I going, officer?
PHYLLIS: I’d say about ninety.
NEFF: Suppose you get down off your motorcycle and give me a ticket.
PHYLLIS: Suppose I let you off with a warning this time.
NEFF: Suppose it doesn’t take.
PHYLLIS: Suppose I have to whack you over the knuckles.
NEFF: Suppose I bust out crying and put my head on your shoulder.
PHYLLIS: Suppose you try putting it on my husband’s shoulder.
NEFF: That tears it.

Neff grabs his hat and leaves, promising to return to meet the husband the next evening, but Phyllis cancels the evening visit and reschedules for an afternoon when neither husband nor maid are there. She suggests to Neff that her hubby also needs an accident policy because even though he’s an oil executive, he often goes into the field where accidents happen.

Neff’s not that big of a dope. He knows what she means. He walks out on her, but she goes to his apartment and it’s all over for Neff. He doesn’t know it yet, but he’s toast.

Up to this point in his career, MacMurray had played mostly good guys in light comedies (seven of them with Claudette Colbert between 1935 and 1949): He had also played saxophone professionally and couldn’t see himself in the role of Walter Neff, telling Billy Wilder, “I’m only a saxophone player.”

Edward G. Robinson supposedly was not at first interested in the secondary role of insurance claims processor Barton Keyes until he was assured a top billing salary. However, second banana or not, Barton Keyes is one of Robinson’s best of his very many great performances.

The relationship between Keyes and Neff throughout is quite poignant, especially at the end when Neff is dying.

NEFF: “You know why you couldn’t figure this one, Keyes? Because the guy you were looking for was too close. He was right across the desk from you.”
KEYES: “Closer than that, Walter.”
NEFF: “I love you, too.”

There is one technical error that I have to point out in a key scene when Neff and Phyllis have their final meeting in the Dietrichson home. A window is open and Victor Schertzinger’s beautiful tune “Tangerine” is playing (an instrumental version, without Johnny Mercer’s words) on a radio somewhere down the street. This story takes place in the year 1938 and “Tangerine” was not recorded until 1941 (I just happen to know this because I love the tune – it became a jazz standard – and was surprised to hear it being played here): No biggie, and it makes sense if you know the lyrics – Tangerine selfishly loves only herself, so it is the perfect theme for Phylllis:

Yes, this third film directed by Billy Wilder is one of the great examples in the film noir genre. He would revisit the genre five years later with the superb Sunset Boulevard, also told in flashback, but this time by a dead man.