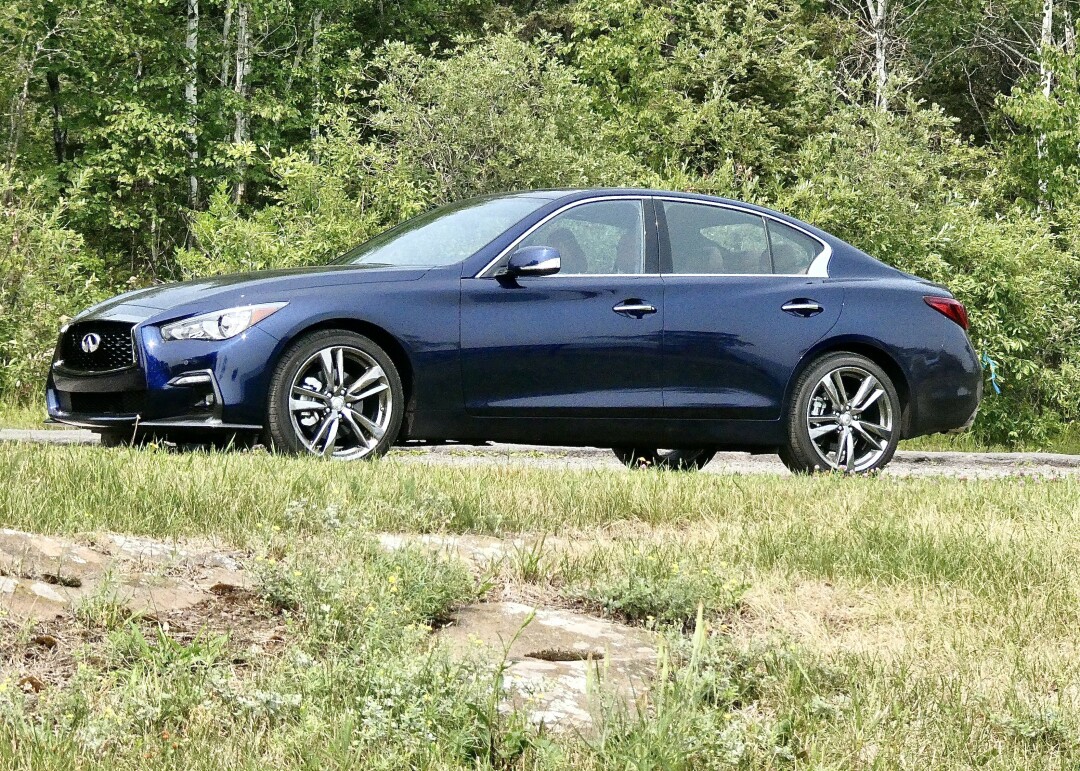 The “big three” of Japanese automakers have been a dominant force in the U.S. auto market for several decades, and as good as utilitarian models of Honda, Toyota and Nissan have been, all three have upscale groups that have branched off from the mother ships and made their own way to the top.
At Toyota, that would be Lexus; at Honda, it’s Acura; and at Nissan, it’s Infiniti. In most cases, the companies push their newest technology out to the public in those upscale brands, and in some cases there is no comparison between the top tech and the basic stuff.
In the recent economic drop-off, those companies are reeling in some of the more futuristic vehicles, and in some cases drops in sales are threatening.
At our house, we acknowledge that some of the Infiniti models may lack the promotional push of the Lexus and Acura vehicles, but we also list a couple of Infinitis among our all-time favorites.
A perfect example is the 2021 Infiniti Q50 sedan, which I recently spent a week with on the North Shore of Lake Superior, where the pleasure of driving can easily outclass outrageous mid-90s heat, and the comfort and features are right up at the top.
The particular model we drove was a Signature Edition, which had extra features inside and out, including a couple that escaped Motor Trend’s annual new-car-capsule edition.
Motor Trend’s “experts” didn’t include the 300 horsepower or the 295 foot-pounds of torque from the 3.0-liter twin-turbocharged V6, while it did point out that the 2021 model is “unchanged” from the 2020 version.
Overlooked in their snarky evaluation is the fact that the new Signature Edition has Nissan’s “Intelligent” all-wheel-drive system, and while that allows you to direct the power via the 7-speed automatic transmission to all four wheels, it also would, you might think, elevate it up even with or beyond the competitors in that segment, while the magazine puts it down for falling short of its rivals.

But before we blame Motor Trend too much, Nissan/Infiniti itself needs to be called to account in its Monroney sheet of vehicle details for pointing out that the tester’s sticker price of $52,800 includes $695 for “Premium Paint,” but it fails to inform us what the name of that color is. Paint colors are one place where manufacturers can be excused for overwhelming hyperbole, and they usually meet that challenge.

But while you can get away with kissing off black or white as, black or white, the test car was a stunning dark blue.
I admit to being a “blue” person, to the point where my wife, Joan, often downplays blue things because she knows I’ll like them too much. But the Q50 Signature was such a riveting dark blue that Joan pointed it out to me how much she liked it before I even had the chance to rave about it. It’s so dark that it appears black in subdued light or at nighttime, but when the sun hits it, the dark blue penetrates your senses.

It also makes the bright silver on the aluminum 19-inch wheels provide an impressive accent, although Joan and I agreed we’d prefer brushed alloy to let the color do the talking.
In the annual battle to beat the competition out with features, a couple of Nissan’s major achievements has been in accident-avoidance technology, and in the tech-screen display of monitoring anything you might be backing ump toward.
While others were coming out with impressive rear-view camera views, Nissan was the first I experienced with full 360-degree surround video, which showed the same ability to scrutinize anything trying to crowd your road space in all directions.
On the new Q50, if you hit the right setting you get a top-down look at your vehicle with a moat around it, preferably free of any objects. And in their best simplicity, Infiniti calls the system “AroundView Monitor with Moving Object Detection.”
That view is in addition to the car’s innate ability for automatic collision notification, predictive forward collision warning, blind-spot warning, lane departure warning and backup collision intervention.
All that stuff is standard on the $50,000 Signature version, as is the hill start assist, adaptive cruise control with distance-control assist, and active trace assist, which can use all those electronic features to keep you in your lane around curves.
Naturally, with all those ingredients, linking up with your smart phone is a given, as is the navigation system.
Going back to Nissan’s early sports-car days, with the 240Z and since then, the company has put a premium on sporty and precise handling, and the Q50 snakes around curves as if on the proverbial rails, and while I was too selfish in hogging the driver’s seat, it was enjoyable to drive and comfortable both in the passenger and rear seats, which were a rich and soft leather.

Also, all the driving enjoyment was amplified – literally – by the Bose 15-speaker audio system, which filled the interior with sounds of your choosing.
In fact, so good was the audio system that we spent seven solid days of driving the car before, on the final morning, I noticed a neat little horizontal trim line near the audio controls – it was a CD player! I love CD players, and while almost all new cars don’t bother installing them, I give added gold stars to any that do, because all of us, right up to the biggest MP3 addicts, have a shelf-full or drawer-full of CDs, and you would love to be able to play them.

Maybe if the Q50 had fewer gadgets and features, I might have noticed the CD slot sooner, but I’m going to blame Infiniti for not promoting or at least boasting about it more.
If that is the ultimate nitpick, I have one other complaint in such a near-perfect car. OK, two other complaints.
One is that the heated seats lacked the more-recent trend of having perforated leather that allows cooled air to circulate and keep you infinitely cooler on hot days. My car doesn’t have them either, but if I’m calling this one of the best near-premium sedans for $52,800, cool off my backside, OK?
My other complaint is that the Q50 is right at the top among sporty sedans, but the 7-speed automatic lacks steering-wheel paddles, which, with such tremendously responsive power, would be an ideal feature.
Maybe they were left behind because the steering wheel already is loaded up with controls, but they would advance to the pleasure of accelerating or decelerating – especially on hills, where downshifting is the best brake preservative on the planet.
Maybe such things are available for a few more bucks, but those two features are significant enough that one would add to the luxury image and the other to the sporty image.
Maybe Motor Trend would even notice.