Photos fade, but memories and opinions do not 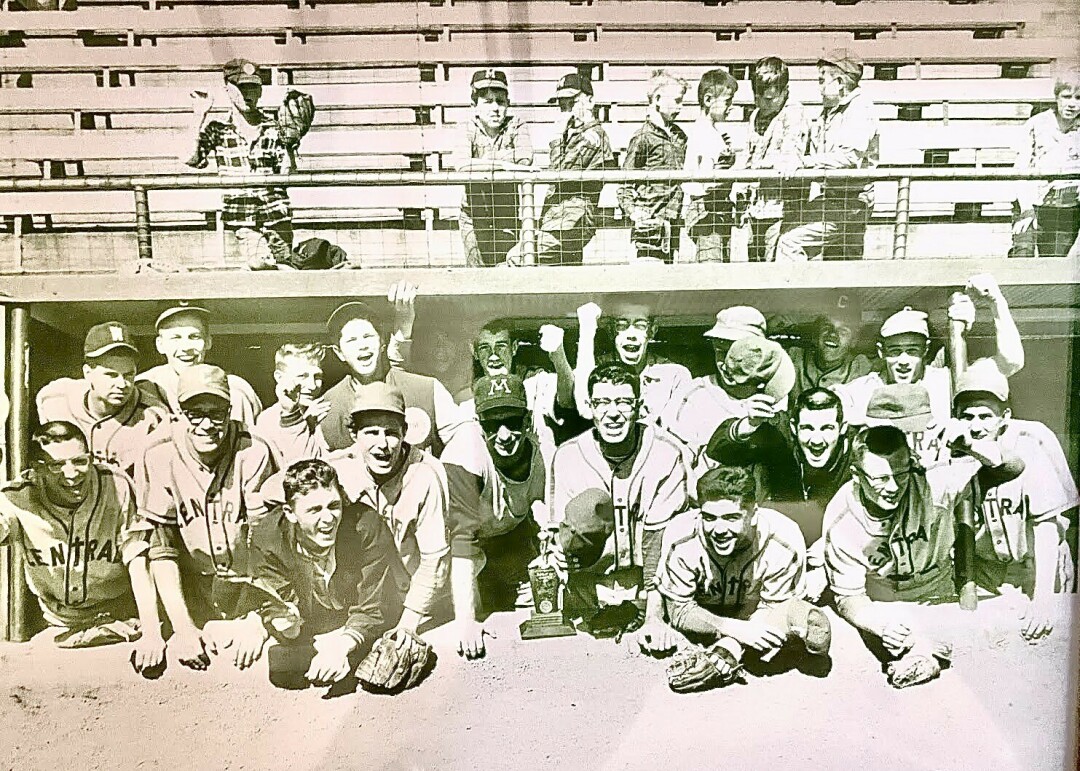 Every time I walk through the room at the Gilbert Compound known as my office, I glance at the row of meaningful photos hanging on the wall. The one that stood out this week was a News Tribune photo shot at Wade Municipal Stadium, with our 1960 Duluth Central District 26 championship Trojans in various displays of celebration leaning out of the third-base dugout.

The 8-by-10 print is faded from too many days of being exposed to too much light, so all of us have faded but are still identifiable – similar to we are, these days.

It’s not every day that this photo takes priority for my attention, considering that other photos sharing that wall include several of my dad, Wally Gilbert, from when he played for the Brooklyn Dodgers, and a team picture of the 1926 and 1927 Duluth Eskimos, for whom he also played and is the only one not wearing a team jacket because he had barely arrived in time in his annual transition from pro baseball to pro football.

There is also a shot of my younger son, Jeff, and me standing in front of my dad’s commemorative photo at the DECC Hall of Fame.

Another prize, shot by my wife, Joan, of me as a standing between both sons, Jeff on one side of me and Jack on the other, in the Shoreview Hawks baseball uniforms we wore able to play an official game together in the Senior Men’s Baseball League and I got a chance to pull a Gordie Howe.

But the picture of our Duluth Central team has multiple meaning now, because Central High School was closed in what was only one of several horribly misguided decisions in the past couple of decades. So our reunion has special meaning, too.

When we sat down with our wives, Bill McGann and I had several conversations about sports in the area. McGann was a standout athlete at Central, and played defense on the hockey team that upset a Duluth East team that ultimately won the 1960 state championship.

McGann went on to play defense for UMD in its fledgling time moving up to Division 1. But the McGanns now spend summer here, otherwise they are one of numerous former classmates who have homes in Arizona, so Bill – who reads The Reader every week – wanted to get my views on various sports.

“What do you think about the Wild?” he said.

I told him I thought general manager Bill Guerin has gone a bit overboard by buying out Zach Parise and Ryan Suter, and by letting former Bulldog Carson Soucy go in the expansion draft to the Seattle franchise.

My reasoning is that Kirill Kaprizov had become THE franchise as a flashy forward who can score, skate and make plays, but needs to be signed.

The Wild have fantastic talent on defense with the strong-skating trio of offensive defensemen in Jared Spurgeon, Matt Dumba, and Jonas Brodin, but all three played their best when paired with the rock-solid Suter or the 6-foot-5 Carson Soucy.

With both gone, the addition of Alex Goligoski on a one-year deal will help, but he’s hardly a tough-guy defensive defenseman, so I think that aggressive forwards will find it “comfortable” to position themselves in front of the Wild net. Suter, declared too old at 36 by the Wild, has signed a 4-year deal for over $4 million a year, and is replaced by Goligoski, who also happens to be age 36!

Most of the media, predominately Guerin boosters, say it was logical to get rid of Parise, but I counter that you can’t demote a player to fourth line, preventing him from playing on the power play, and then complain that his scoring has fallen off.

After scratching him for the first time in his career, Parise also was scratched for the start of the playoffs, and when they did put him in, he responded with two goals, including a game-winner, and arguably was the most effective forward on the team against Vegas, which was pestered by Parise’s hustling, fearlessly attacking style. If you can pull him, then put him in and he is capable of being your best forward, maybe he’s not so easily dismissed.

McGann next switched topics to the Vikings, where I remain more convinced than ever about the potential struggles of quarterback Kirk Cousins. I think it’s bold for him – and Adam Thielan – to resist being vaccinated. There are stupid people who aren’t vaccinated, and there also are smart people who don’t like the concept of the vaccine being rushed through without thorough animal and human testing, knowing humans have become the current guinea pigs, and if a religious belief causes you to not get vaccinated, I yield.

The more specific point is that Vikings-boosting media and fans claim that Cousins is one of the best five quarterbacks in the NFL, but I point to statistical evidence that he was not ranked among the top 10 last season.

Moreover, coach Mike Zimmer seems to be uneasy about having a quarterback who does anything more than stand in the pocket and pass the ball, while the progressive teams in the league all are going to mobile, scrambling, improvising quarterbacks.

Cousins has a strong arm, and when he drops back and his primary target gets open, he can hit him with bullet passes. But when tight coverage, or blitzing linemen, force him to have to move and improvise, Cousins becomes inaccurate and hits either jersey without discriminating.

The Vikings had my favorite quarterback candidate in Case Keenum three years ago, when Keenum took over for the injured Teddy Bridgewater and started 14 games, going 11-3 in those games by being quick to scramble and amazingly effective when forced to flee the pocket and wait for receivers to get free.

If you doubt that, know that Keenum starred for four years at the University of Houston, where he threw for 19,217 cumulative yards and 155 touchdowns, by year connecting on 14, 44, 44, and 48 TDs and totaling 160.6 for a quarterback rating.

Better proof was what he did in that one magical year with the Vikings, only to be rudely dismissed from the team.

Former Vikings assistant Kevin Stefanski was hired as head coach of the Cleveland Browns, and, with Curtis Mayfield as No. 1 quarterback, he signed Keenum to a backup contract of three years for $18 million in 2020, as a free agent.

And on Sunday, Curtis Mayfield sat out for the Cleveland Browns while Case Keenum went 9-12 for 74 yards and a touchdown in a 17-13 victory over the New York Giants.

And then, we talked about the Twins, and I told McGann the Twins have sold their soul to analytics, forgetting all about the great instincts of their own scouting staff and coaches through the system.
When they give you a good reason to buy a ticket, such as my favorite, Eddie Rosario, who defied analytics to swat the occasional outside pitch off the opposite-field wall and improvised to get more first-pitch hits than the rest of the players risked, or Jose Berrios as the ace pitcher on a woefully thin staff, or slugger Nelson Cruz, they send them away as traded investments in future prospects.

Some are good. Some will never become a Berrios, a Cruz or a Rosario. They might agree to strictly follow the analytics, and if you want to go watch robots play while impersonating Major League players, buy a ticket.

Right now, Jorge Polanco is playing so well, we can only wonder if and when the Twins will trade him away.

Back to Bill McGann. After his play at Duluth Central, and at UMD, he became a coach, and he did a remarkable job of running the Proctor High School program and turning the Rails into a tenacious, competitive team that always accounted itself well no matter who the opponent was, and they played in what was generally regarded as the coldest arena in the universe.

Now that the McGanns are spending their winters in Arizona, Proctor has a new arena that is the perfect size for high school hockey. The Rails are building, but remember the Proctor-Hermantown combined girls team won the state championship in March. And in my opinion, Proctor might do well to name that great arena after Bill McGann, because without his leadership, the Proctor program might have withered and disappeared instead of battling to be competitive and getting a new arena.

We don’t know when we’ll have our next reunion, but it needs to happen while most of his who are still around are still around. The recollections are fun, and inspire more of them as the years pass. I missed a number of classmates who chose to bypass the chance to return to Duluth because of the pandemic threat.

Worse, a shocking number of the Class of 1960 have died, and as far as I can tell, we aren’t going to get any younger as the years roll by, and the surviving players on that joyful Duluth Central district championship team fade along with the photo itself.