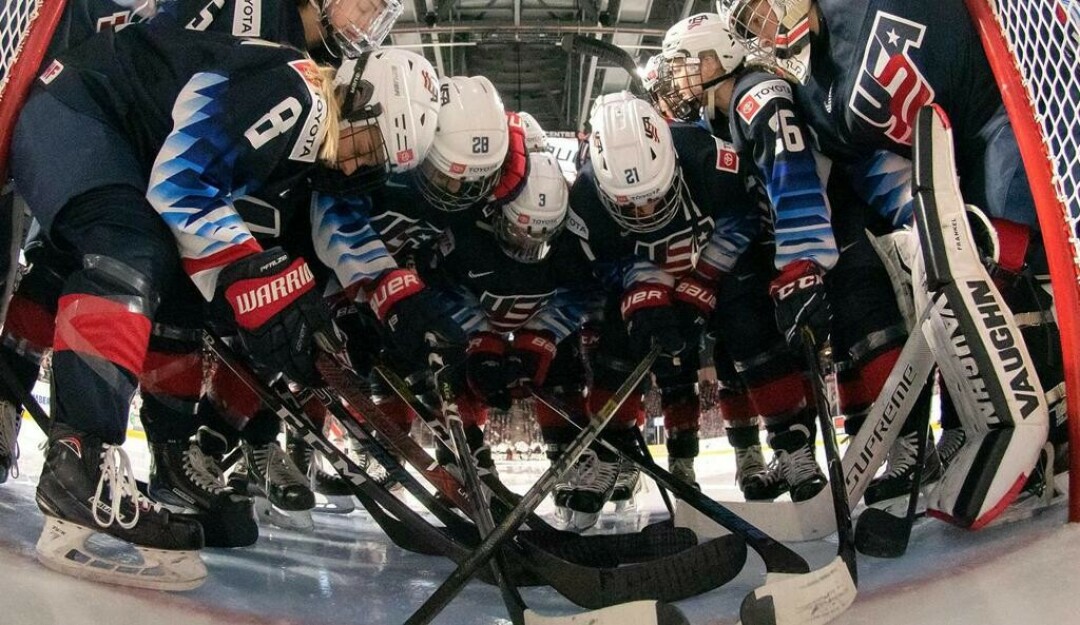 MOUNT ROYAL – The Team USA entry in the IIHF Women’s World Championships is now 2-0 after defeating Team Finland tonight by a 3-0 score in Calgary, Alberta. Friday evening, they beat the Swiss Women’s team by a like score.

The Americans came into the tournament as the favorite and are currently enjoying a #1 World ranking. They are going for their sixth world championship title in a row, and if they do achieve that, it would be their tenth title out of the past twelve tournaments.

Team Canada is still ranked at #2 in the rankings at this point. If the USA had fared better at the Olympics since Women’s Hockey was brought in (2 Gold, 3 Silver, 1 Bronze in 6 Oly games), it would be easy to say that they had been the dominant Women’s team in the sport.

However, Team Canada had some of its best players ever upon its Women’s National Team, and they were excellent. The battles between the two teams have been nothing short of ultra-competitive, epic sports events. The two organizations have been the cream of the crop with skill levels above all others competing in the sport.

The Finns, Swedes, and Russians have had some short time frames where it looked like they too might elevate to that lofty status but couldn’t turn that corner and get there and sustain it.

In viewing the game action since the event began last Friday, my eye test says the USA team is the best team in the tourney; as far as #2 and 3 go, I feel that Canada and Finland might be a tossup at this time. The Finns knocked the Canadians around in the first period of their game Friday, emerging with a 2-0 lead. They could not hold on, though, and ended up dropping a 5-3 decision.

Both the USA and Canada clubs have lost some veterans due to retirements and turnover. It appears to me that the USA team has come out of that process, with perhaps a slightly better team coming into this event.

On Thursday evening, the last night of the qualifying round, Team USA will faceoff against Team CANADA. I expect nothing less than what we have seen for the past 20-some years from these two when they meet on the frozen sheet, an all-out battle that won’t be for the faint of heart. Your conditioning should be at its peak and don’t forget to bring a razor-sharp focus with you.

These two teams have always played for keeps, and I have considerable anticipation for this game already, and there are still a few days to go.

There is a trophy and world ranking on the line here, along with some bragging rights, and a great deal of this event will be used for Olympic player evaluation. Early February will be here before we know it. The games will go from the 4th until the 20th. The essential core for these two teams is at this IIHF event but based on injuries, plus additions, there will be a slightly different roster on hand when the Olympics finally begin. Former UMD star Maddie Rooney isn’t at this event due to an injury but should return soon.

I have observed the Women’s game from the start and must say that if you are a guy, and you won’t or can’t watch because it’s the “women’s” team, you are short changing them and yourself. I can state here that in the mid to late ‘90s, the skill level was about what you would expect from a group in an emerging sport; it needed some improvement.

And now? The Women’s game has not only achieved that; they have blown right past it and play a powerful brand of hockey. I have watched some of their training videos, and of course, most of their competitions. These are world-class athletes that don’t have to take a back seat to anyone in any sport. The games are on the NHL Network in the States, and you should tune in. The schedule is at IIHF.com.

THE MINNESOTA WILD is close to being finished with their off-season deals. Last Monday, they inked Kevin Fiala to a one-year deal at $5.1 mil. After the upcoming season, he will re-enter RFA status, and GM Bill Guerin will get to go through this all over again. But I am compelled to say there were mitigating circumstances here, so this may have been the only way to go at this time. The case was scheduled to go to arbitration last Tuesday.

The bulk of Guerin’s dealing thus far is obviously the setup for signing the budding Russian star Kirill Kaprizov. The team has been desiring to lock up KK to as long a term deal as possible. (8-year max deal) The dollar amounts being floated around are substantial too. I’ve heard everything from $8 mil per season on up to $10 mil or slightly more.

For me, I’d exercise some caution here, if for no other reason than the desperation of the team to land this player for a long time appears to be written all over the early negotiating. The team is coming through as over-anxious, and Kaprizov and his agent as not so much. Despite some overtures about the chance that he could stay home and go back to the KHL, Guerin does hold most of the cards here.

My viewpoint is simplistic; the kid is pretty good, but do we really know how good he could be? Good enough to throw $80 mil at him after one incomplete NHL season?

That’s where my indigestion on this comes into play. The kid was a 5th rounder, 135th pick overall. He took his time coming over here to play. When he did arrive, he already had six seasons of professional hockey under his belt. He will be 25 next April. How much better can he get? And the million-dollar question; how long will he be that good? Eight years worth?

He played in a 56 game season here against one division only. He scored 51 points in 56 GP. 64% of those points came against the bottom four clubs of that division. And above and beyond that, he was a no-show in the playoffs.

OK. First time away from home. A long way from home at that. New league, the best one in the world. New language to learn. A new culture to assimilate into. New food, new diet. And BTW, when you aren’t practicing or playing a game, you are supposed to shut it down and stay home.

Then I see the skating, the hands, the shot, the vision, the personality, and so on. How can you NOT like this kid? Was he a steal at 135th? He and his agent Paul Theofanous are locked in a giant cat and mouse game at this time. They want a deal in the 3- to 5-year range.

By then, KK will be at UFA status and free to go if the Wild hasn’t progressed to their liking. Will that be possible with the upcoming Parise-Suter contract buyout handcuffs on the way? So, you want to be a GM? PEACE