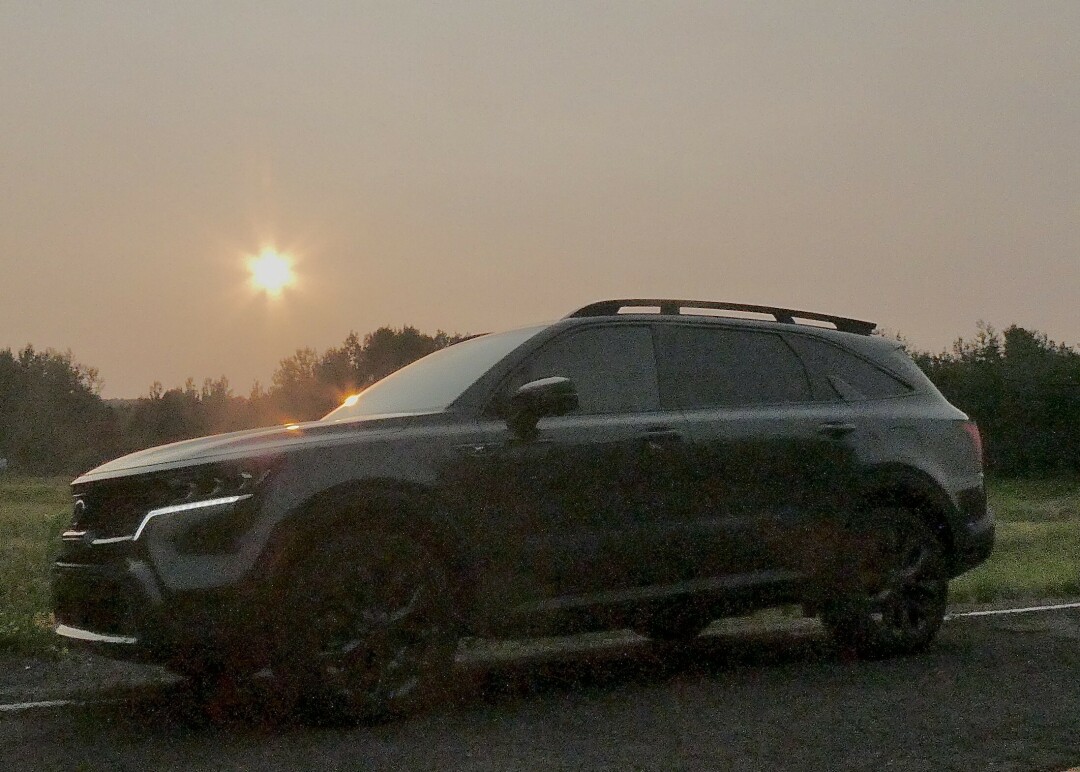 Redesigned 2021 Kia Sorento in the hazy sundown of the North Shore. Photo by John Gilbert.

A fellow came over to our table at the Boathouse and said, “I don’t read The Reader very often, but I really enjoyed the column you wrote about cruising in downtown Duluth.”

We had a few laughs about the good ol’ days and the primary style of socializing when we were teenagers back in the 1950s and ‘60s. The topic of cars has proven durable in the 61 years since we graduated as the Duluth Central Class of 1960. As we met for good food and camaraderie for our year-delayed 60th reunion, it seems we’ve all pretty much accepted who we are and how old we’ve become, and if anything, those of us who made it, joked about it.

We were all in agreement about the benefit of name tags, also, which allowed us to avoid having to greet warm, welcoming handshakes by asking, “Who are you?” The reunion continues with a noontime tour of old Central High School on Friday that we might have to make.

Reminiscing and discussing sports and cars led inevitably to some good discussions about the modern state of cars, and whenever the discussion veered to Korea, and cars built by Kia and Hyundai, invariably the folks would admit to a hesitancy about buying cars from South Korea.

Several times I brought up a couple of assurances, about how I had just driven a Buick Envision that was entirely built in China, and I recently tested-drove a Kia Sorento that was built in West Point, Georgia.
The Sorento is a good topic to tie in with reunion week, because I distinctly remember the introduction of the first Sorento, at Lake Tahoe, where we encountered every season imaginable in 24 hours, finally driving out before a heavy snowstorm was predicted to hit. What could be better, I thought, than to test a new all-wheel-drive midsize SUV in a blizzard?

The first Sorento was good, a parallel to the Hyundai Santa Fe. They have both evolved, as has the partnership conglomerate, which builds Hyundais in Montgomery, Alabama, and Kias in West Point, Georgia, at a pair of modern, high-tech plants that have an engine-building plant located right between them, 50 miles from each.

I could make a number of convincing arguments on behalf of the new Sorento to my apprehensive classmates, but the most convincing was when they recalled how chintzy Kias were back 20 years ago, and I could say that they have improved so much, structurally and in attention to detail, that the Sorento has helped Kia rank at the highest level for mainstream vehicles for six consecutive years in the JD Power Initial Quality rating.

When Kia was absorbed by Hyundai more than a decade ago, the timing was perfect. Hyundai had just found a technical breakthrough in engine-building, and the creation and perfection of building in-house transmissions and safe, solid platforms and bodies was facilitated because Hyundai is the only auto-maker in the world that owns its own steel plant, making large quantities of high-grade steel readily available.

Having driven various upgrades of the Sorentos through the years, I can confirm that the new 2021 model is by far the best. One classmate asked about the highly successful and publicized Kia Telluride, and while I explained that it was a multiple award-winner as the sister ship to the Hyundai Palisade, it is a large and roomy midsize SUV with as much room as larger vehicles.

In my opinion, the popularity of the Telluride led to the styling of the Sorento, which, at a glance, looks like a slightly downsized Telluride. The grille, front end and rear styling clearly have Telluride influences. And under the hood, the Sorento shines.

In a previous column, for Gilbert’s Garage and the website Newcarpicks.com, I wrote about the newly redesigned Sorento, having driven it with the fully capable 1.6-liter turbocharged 1.6-liter four and it was a hybrid.

This time I got the alternative, also with all-wheel-drive, but powered by the new corporate 2.5-liter four-cylinder turbocharged engine, which produces 281 horsepower and 311 foot-pounds of torque.

Choosing the turbo version boosts horsepower by 90, with 70 percent more torque than the normally-aspirated 2.5, and the fuel-economy penalty is reportedly 1 mile per gallon. The turbo 2.5 also is worth over 50 horsepower and 50 foot-pounds of torque over the 1.6 turbo version.

EPA estimates show 21 mpg city and 28 mpg highway, and we got 25.8 for the full week of mostly city-highway combined driving.

Kia also equipped the X-Line vehicle with all the high-tech safety and convenience elements the company has developed. The bucket seats were a soft quilted leather, perforated to allow free-flowing air to circulate air-conditioned air and spoil me for that feature in this summer of never-ending 90s.

The other thing this summer has done to all of us residents of Duluth, Minnesota, is make us aware that it is not safe to freely breathe the air in Northern Minnesota, not while the wildfires burning in Manitoba and now in Northeastern Minnesota, near the Boundary Waters Canoe Area Wilderness, send us windblown haze and lung-polluting particles.

We became comfortably dependent on hustling from our house to the Sorento, climbing aboard, and immediately starting the engine with the air-conditioning on “recirculate” to cool the existing inside air only, while preventing any of the nasty fumes from getting in.

We drove up the North Shore to Grand Marais, and when we returned it was near sunset, so it gave me the chance to pose the Sorento for a photo or two with the setting sun glowing through the haze as it descended over Duluth’s prominent hills.

Driving the Sorento has the added pleasure of riding on such a stiff platform, made more compliant with a mode switch that adjusts to snow, eco, comfort, smart and sport. That switch alters the firmness of the suspension and the building go engine revs. The potent 2.5 Turbo can also be manually controlled by steering wheel paddles for up- and downshifting.

Just about every feature you can imagine, and a few you can’t, are included on the Sorento, which still comes in under $40,000 when loaded.

The transmission is a prize, too, improved to being an 8-speed dual wet-clutch design.

The Aruba green paint set off the dark alloy wheels, which, as part of the X-Line, are shot with 245-45/ 20 inch Continental tires. That may help the sporty flair of handling the Sorento, and any extra harshness from the big wheels can be regulated with the mode selector.

Locking center differential on the AWD and torque-vectoring with downhill descent control and the snow mode both should be welcome features.

All of the safety and performance features make the Sorento a standout in its, or any, segment. Adding the convenience of three rows of seats also bolsters the vehicle. The second-row buckets fold down and slide forward to ease entry and exit to the rearmost seats, and all of the second and third row seats fold down to make a large storage area positively enormous.

It would be fun to compare the 2021 Sorento with all the latest technology to the original Sorento from a decade ago.

Might be an interesting comparison – a lot like coming back for your high school reunion and comparing hobbies and family features with close friends, and with those you may not have known very well, way back then.

It doesn’t seem fair that  new vehicles age more gracefully than their owners.

Even with seats in place, storage room is generous in the rear.