Sturgeon survey on the Couderay River 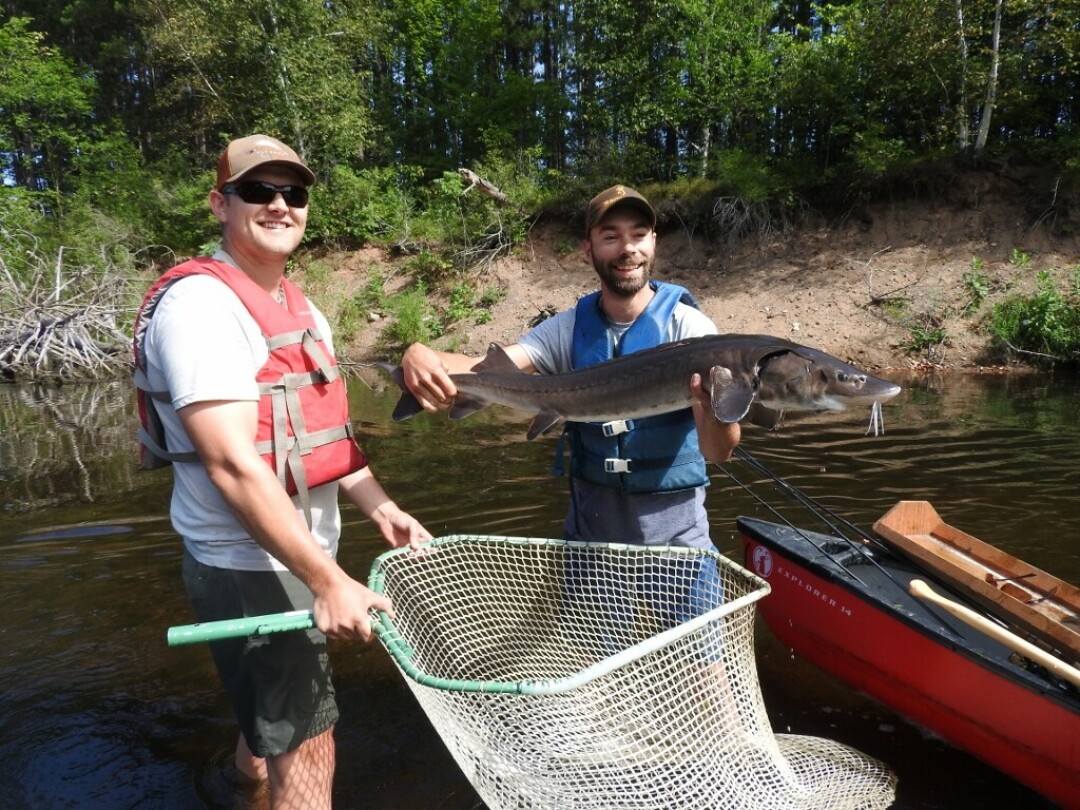 Max Wolter, Fisheries Biologist with the Wisconsin Department of Natural Resources, is studying sturgeons’ natural return to the Couderay River following the removal of a dam. Photo by Emily Stone.

As I peered into the deep pool below the bridge through my polarized sunglasses, the four-foot-long, dark gray torpedo slid smoothly above the pale, sandy bottom near a school of giant catfish.

This hole on the Couderay River near Radisson, Wis., is a favorite hangout for lake sturgeon. Max Wolter, Fisheries Biologist with the Wisconsin Department of Natural Resources (WDNR), knows this because his crew had caught them here before – including in 2019, the last time I joined them on the survey.

Still, knowing a fish is there, and catching it, are two very different things.
In 2019, the guys had first attempted to hook the sturgeon using a worm as bait. This year they went straight to a tactic that proved to be more successful.

Fisheries Technicians Evan Sniadajewski and Scott Braden unwound a gillnet – basically a nylon volleyball net on moveable poles – and waded upstream of the pool into waist-deep water. Lee Dubois, a Masters student at UW Milwaukee, got the humongous landing net out of the canoe. Its diameter was about the same size as the circle my arms would make if I was telling a whopper of a big fish story.

Max – standing in the stern of his canoe – herded a sturgeon toward the gillnet.

The fish rodeo was exciting and quick. Before I could even see a way to help, the guys had stopped the sturgeon’s upstream escape with the gillnet, and Lee had scooped it safely into the landing net.

After some excited whoops, the tagalongs – me and four Museum members – all waded over to Max’s canoe to process our first big catch.

As Evan showed us this magnificent fish, he began to wax poetic about their adaptations.

Sturgeons are bottom feeders. The whisker-like barbels on the underside of their snout are covered with chemoreceptors to help them “smell” food underwater.

“It’s probably the most sensitive part of their body,” he said admiringly.

When those barbels sense food (snails, insects, leeches, crayfish and small clams), the sturgeon thrusts its tubular mouth downward to suck up prey. Any gravel that gets sucked up in the process is expelled through their gills.

We all took the opportunity to run a hand over the sturgeon’s skin, and I was astonished to find that it was sandpapery – like a shark’s skin.

Max also pointed out the smoothly arched dorsal fin – which, when we eventually let her go, cut through the surface of the water just like a mini-Jaws.

Sturgeons are pretty ancient fish. They evolved just as the dinosaurs blinked out 100 million years ago, and have undergone very little anatomical change since then (although the 29 species of sturgeons worldwide have quickly evolved a wide range of body sizes to fit various niches.)

Max waved his hand-held tag reader over the sturgeon’s head. The scanner beeped! The WDNR has been tagging sturgeons on the Couderay River for enough years that it’s more likely to find a tagged fish than an untagged one.

Since the Grimh Dam in Radisson was removed in 2011, the Couderay now flows freely into the Chippewa River, where sturgeon populations are healthy enough for harvest.

The WDNR is documenting the sturgeons’ natural recovery into one of their historic haunts, now that the fish are no longer cut off by the dam.

In Wisconsin, lake sturgeon is a species of “special concern” with regulated harvest, but sturgeons are listed as threatened or endangered in 19 of the 20 states within the fishes’ original range.

Since this sturgeon was only 41 inches long, and the one we’d caught here in 2019 was 50 inches long, we knew that they couldn’t be the same fish. The guys would compare data back at the office, and learn more about the movement of sturgeon in the river.

Over the course of the day (only 3 river miles long), we captured three sturgeon, all with tags. We were thrilled to see those fish, and to watch the guys use all their skills to catch them. It was a little anticlimactic for me, though, because in 2019 we had caught 10 sturgeon on this same stretch of river.

When I asked Max where the others might have gone, he cited the dry spring and said that they’d probably moved down river, or perhaps not migrated as far upstream as normal, in response to lower water levels. Recent rains have brought the river back up to normal, but the fish haven’t followed.

I could tell that these guys have a passion for fish and fishing that I’ll never match. Many of their field days include pushing through overgrown creeks under the constant attack of mosquitoes and horseflies.
This spectacular day on the river was a real treat – to put their skills in fishing and fish handling to work in a beautiful setting. It’s because of their passion – and the funding you provide through your fishing licenses – that sturgeon (and trout and bass etc.) will only vanish deeper into a pool, and not disappear from our state.

Author’s Note: portions of this article were published in 2019.

Emily M. Stone is Naturalist/Education Director at the Cable Natural History Museum. Her award-winning second book, Natural Connections: Dreaming of an Elfin Skimmer, is now available to purchase at cablemuseum.org/books and at your local independent bookstore, too. For more than 50 years, the Cable Natural History Museum has served to connect you to the Northwoods. The museum is now open with our exciting Mysteries of the Night exhibit. Connect with us on Facebook, Instagram, YouTube, and cablemuseum.org to see what we are up to.