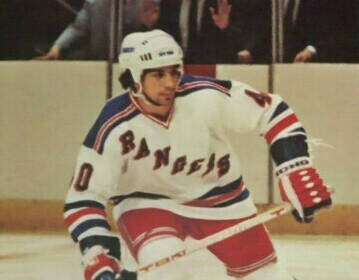 Mark Pavelich with the New York Rangers in 1986.

My favorite memories of Mark Pavelich are scattered throughout his hockey career, from the time he provided enough on-ice energy to light up the Eveleth Hippodrome while singlehandedly making the Golden Bears a threat in the Iron Range Conference, and on through his years at UMD, where he led the Bulldogs to contention in the WCHA up through his 1978-79, then of course with the 1980 U.S. Olympic team where he was the key offensive instigator throughout, including the Miracle on Ice 4-3 victory over the Soviet Union’s heavily favored team.

I stayed in close touch, journalist to star player, when he rejoined Herb Brooks to play for the New York Rangers. Then, after Brooks parted ways with the Rangers, Pav abruptly quit the Rangers and came home to Minnesota to live up the North Shore in seclusion, where he and his wife could live free and he could fish all he wanted to.

Pavelich was loved by all his teammates, at every step of his career, and he played with a carefree style of constant improvisation which was what Brooks sought to instill in all his Olympic players.
In the 1978-79 season, he bedeviled the Gophers and inspired fierce competitiveness in Brooks, who grumbled that his coach, Gus Hendrickson, must have pulled strings to get him eligible because both were from Eveleth.

I told Brooks he’d like Pavelich a lot more the following year, and Herbie snarled, “Why would I?”
“Because,” I told him, “you’ll appreciate him when he’s the best player on your Olympic team.”

Turned out to be an accurate prediction. Pavelich’s ability to make something out of nothing on a hockey rink often meant that he would try something in a game that maybe he had never tried before, at least since those days out on Ely Lake, and it was that instinctive confidence and inventiveness that inspired Brooks to push all his Olympic players to trust their own abilities and turn games into “sophisticated pond hockey.”

Ronn Tomassoni grew up playing on a rival rink in Eveleth before the two became teammates and friends for life, and Tomassoni was hit with devastating sadness when Pav decided to end his own life while seeming on the road to rehabilitation with mental treatment at the Eagle’s Healing Nest veteran’s facility on March 4, 2021.

And Tomassoni shares my feelings that Pavelich should be remembered as a great player and a great, warm human being – more than for the unraveling of his post-hockey life from a form of dementia that may well be traced to blows to the head he suffered in the NHL

After being allowed to move from the state facility in St. Peter to Eagle’s Healing Nest in Sauk Center, Minn., where he was warmly adopted by other residents, Pavelich’s family and former NHL players have moved forward with fulfilling plans for creating a facility where the numerous hockey players and athletes can receive the proper and necessary treatment.

Former Rangers captain Barry Beck, and NHLers T.J. Gorence and Clint Malarchuk are among those on the board of directors for the project – called “The Ranch, Teammates for Life.”

The location was in question until Melanie Butler from Eagle’s Healing Nest, donated the land, and a building, where groundbreaking ceremonies Friday will kick off a massive fund-raising weekend that will lure hundreds of hockey followers and players to help celebrate the brilliance of Mark Pavelich and provide a proper legacy for him.

After the groundbreaking on Friday, a Mental Health Awareness Night Sunday from 6-7 p.m. at Hermantown High School, where Malarchuk will be among the speakers to talk about mental health for athletes, and open to the public.

The climax comes Monday at Giants Ridge near Biwabik at 9 am, where a scrambles event is already oversold with golfers from the hockey community nationwide, and a 3 pm auction of mainly hockey-oriented items – including Pavelich USA jerseys signed by his former teammates – followed by a program. A number of former Olympians, NHL and college coaches and players are already booked.

Guy LeBlanc of Hermantown has been helping coordinate the weekend and said donations have been flowing in.

“We hoped to get sponsors for 18 holes,” LeBlanc said, “and we’re just about at 60.” More information, and donations, can be made at “therancnteammatesforlife.org.” Also, more information about the golf Scrambles event can be obtained by email to: “guyleblanc26@gmail.com.”

Proceeds will go toward that facility, with some also dedicated for UMD and the Eveleth Youth Hockey programs, where Pavelich learned to play the game that he played so well.

This has been a busy summer for movement of players and coaches in sports, and particularly in the Twin Ports. Last week, Jackie MacMillan resigned after being the only coach in the history of the St. Scholastica women’s hockey team. Julianne Vasichek, her assistant and a former two-time NCAA champion during UMD’s first years, was named to replace her. As far as anyone knew, it was a surprise, but nobody suspected anything untoward had led up to the decision.

Then came the social media statement from MacMillan: “At times, as a collegiate coach, difficult decisions need to be made in order to build and maintain a winning culture,” she wrote. “As a female coach, it has become increasingly more difficult when leaders at the upper level allow personal attacks with no merit to occur…It has been an incredibly difficult decision to move on from a program that means so much to me.”

Now we are left with more questions than answers. About the same time, Jen Walters, who was lured away from a dominant career as St. Scholastica’s softball coach to take over the UMD program, announced she was resigning to accept an offer to become assistant softball coach at the University of St. Thomas, which is moving up to Division I this fall.

This week, another surprise came when Laura Harmon announced she was resigning as UMD’s women’s cross country and track and field coach, after recently adding the task oof also coaching the men’s program, She is returning to the Pacific Northwest to be near family.

The Duluth Huskies are hurtling through the home stretch in hopes of squeezing into a Northwoods League playoff spot, but regardless how that ends up, a game like last Sunday’s amazing 8-7 victory over the St. Cloud Rox at Wade Municipal Stadium will remain a highlight of a weird summer.
The Huskies grabbed a 4-1 lead in the bottom of the second inning, there blew the lead when the Rox tied it 4-4 in the fourth.Will McIntyre, the Huskies top pitcher with a 5-0 record, had overcome the nasty fourth, and was presented a 7-4 lead in the last of the fourth when catcher Bryan Broecker – batting ninth in the order – hit a 3-run double.

That lasted until the top of the seventh when the Rox loaded the bases. The bullpen did little but to eliminate mcIntyre’s chance for a sixth win as a reward for a strong performance, and Andrew Pincknay ripped a double down the left-field line that scored all three runners for a 7-7 tie.
In the last of the eighth, Broacker hit another double to drive Javie Brill, who had singled, to third. The Rox walked leadoff man Charlie Rhee to load the bases, but shortstop Michael Brooks hit a fly ball to center, and Brill slid home with the run that prove to be the winner in an 8-7 battle against one of the top Northwoods teams.