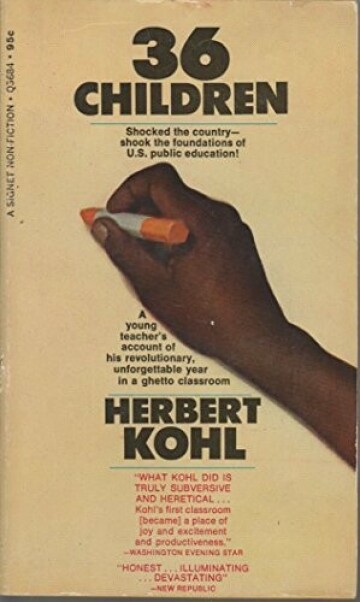 I first read the book 36 Children as I pondered whether a teaching degree might be more practical than a poly sci degree. It was a highly personal exposé of New York City’s inner city schools. On the back cover a black child’s hand writes, “ … My block is the most terrible block I’ve ever seen. There are at lease 25 or 30 narcartic people in my block … they don’t do nothing but shooting, stabbing and fighting.”

New York’s inner city schools were already infamous from movies like Blackboard Jungle and Up the Down Staircase. No one was contemplating a Minnesota Miracle for New York or other big city northern schools. If it was any consolation it was more indifference than the South’s malice that cheated black children out of a decent education.

The paperback my Dad gave me was still on my bookshelf waiting to be revisited 50 years on. The only anecdote I could recall from the book was the overnight field trip that author Herbert Kohl had taken some of his students on. He loaded them in his car to visit his alma mater, Harvard. He wanted them to dream big. But when the children got to their motel rooms they refused to budge from the clean beds, televisions and vending machines. After Harlem this was heaven.

Like me, Kohl reconsidered his future. He dropped a masters degree in philosophy and returned to New York to spend a year in teacher’s training at Columbia University. Coincidentally, my grandfather got a masters degree from Columbia in 1915 in hopes of becoming a school superintendent. I visited the campus 25 years ago and discovered it sandwiched between Harlem and Grant’s Tomb.

Kohl’s first year teaching was in a white New York public elementary. The philosopher in him recoiled when his middle class, fifth graders, wanted him to stick to lessons that they thought were needed to get into good universities. His unconventional attitude got him reassigned the following year to an all black elementary five stories high.

I was gobsmacked to read that Kohl’s sixth graders were eager for the world championship fight between boxers Floyd Paterson and Sonny Liston. Kohl’s kids were my age! But I was attending an integrated class in Topeka, Kansas. And Kansas had kept its black and white elementary schools scrupulously equal even before the Supreme Court ordered the Topeka schools to integrate. My sixth grade class picture shows 14 white students, 1 Osage Indian and 17 black kids. Unlike Kohl’s classes we all had books in every subject for every student while Kohl had to bring books from his home for his students. Not that he minded. His books were better.

His first two months were rocky but Kohl fought despair and persisted. He became a Pied Piper. He was not about to let New York’s indifference cost his 36 their futures.

New York schools sorted the wheat from the chaff after sixth grade. Students who didn’t do well on state-wide tests were routed to inferior schools (if that can be imagined) after sixth grade. Kohl’s sixth grade students had started the year at the 3rd or 4th grade reading level. He told his students their futures depended on the state-wide test. Then he violated school information sharing policies. He showed the children their official IQ scores which were mostly 20 or 30 points below  the “average” 100 point IQ, along with their reading scores.

The children were shocked and outraged. They had no idea they were so far behind other children. They begged Kohl to help them prepare for the tests. That year their reading scores shot up three, four, five, six grades levels. They also did well on the statewide tests. But this was still 1962, still New York City, still an all black school. Reality set in when Kohl visited with one of the school’s most popular teachers – popular by virtue of his kindness to his students. He had long since abandoned trying to teach them.

Kohl asked him why he made no attempt to teach his students. It was simple. For 10 years this teacher had been another Kohl and sent his students on to better schools. But every year when he checked with his students he found they had given up. It broke his spirit and his heart – all his work was wasted. He stopped trying and simply gave students something he knew they craved. He was nice to them. Minnesota Nice. He implied the same thing would happen to Kohl’s 36. Sorry. There will be no spoilers here.

In 2007 Duluth’s schools made use of a new law that allowed the school district to build the infamous Red Plan without a public vote so long as the purpose was for “desegregation.”

From the start, those in-the-know understood that there was no way Duluth’s Chinese Dragon of a district could be divided in two without segregating its schools as never before. How disappointingly typical. Minnesota is infamous for having the greatest achievement gap between white and black students in the nation.

Harry Welty dedicates this column to the devotees of Fox News who fear the teaching of “Critical Race Theory” and “systemic racism.”