Nuclear weapons are a local issue 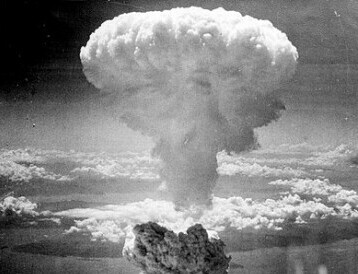 The United Nations has adopted a treaty to ban nuclear weapons. On Jan. 22, 2021, the Treaty on the Prohibition of Nuclear Weapons went into force. Nuclear weapons are now illegal under international law.

Eighty-six nations have signed the treaty, pledging not to make, possess, receive, deploy, use or threaten to use nuclear weapons. A signatory country agrees to not allow other nations to use their territory for deploying nuclear weapons.

Unfortunately the treaty only applies to nations who sign it. Our country did not participate in negotiating the treaty and refuses to sign it.

We are also pressuring our allies (with and without nuclear weapons) not to sign the treaty. Rather than leading to rid the world of these horrible, unusable weapons we are a major stumbling block to abolishing them.

Following our “leadership” none of the other eight nuclear powers (Russia, England, France, China, Israel, India, Pakistan, North Korea) are ratifying the treaty either.

Without the cooperation of the nuclear powers everyone in the world continues to live with the risk of a nuclear holocaust, a “limited” exchange, a mistake or an accident with these awful weapons of mass destruction.

You may think problems like nuclear weapons don’t affect us in the Northland. These are national and international issues that we can not do much about. But everyone – even people living in smaller cities and less populated areas – will be affected by any use of or accident with nuclear weapons. There are a number of reasons why Northland residents should be concerned and should be pressuring our government to sign the treaty.

To begin with Duluth-Superior is probably a target. Our area is not a top priority target, but we are a major port and have an Air National Guard Base with defensive fighter intercept planes.

In addition our area will definitely be affected because we are close to, and downwind from, a major high priority target – the nuclear attack missile silos in the Dakotas and Montana. Our area would receive radioactive fallout from any attacks on those silos.

Nuclear weapons are the most destructive, inhumane and indis-criminate weapons ever created. They are not just bigger and more powerful versions of conventional weapons.

Plus it is impossible to use nuclear weapons for purely military targets. Massive numbers of civilians will be killed and horribly injured with any use of nukes. Radiation exposure will cause long-lasting illness, cancer, genetic damage and birth defects.

A single nuclear bomb detonated over a large city could kill a million people. But most nuclear weapons are not single bombs. A single missile carries multiple, independent warheads.

A full-scale nuclear war would cause the collapse of countries, economies, climate disruptions and wide-spread famine.

Nukes are the only weapons that can actually destroy the United States. No country – not even China or Russia – has the logistical or military capacity to actually invade, conquer or occupy the United States. But nuclear weapons can strike us at any time, anywhere in the country, with almost no notice.

And nuclear warheads – even a few of them striking somewhere in the country – would create unprecedented human and physical damage.

Few people think about it but there would be no emergency services, rescue or aid available in a targeted location. Local emergency services would be destroyed, immediately overwhelmed or simply unable to respond because of the massive destruction.

Outside help would be useless because emergency personnel could not enter radioactive blast zones. Depending on many variables the unsafe zones could extend for many miles from ground zero.

Stop and think about that for a moment. What ridiculous prattle about freedom, democracy, national interests, economic differences or competing governmental systems would be worth this level of destruction?

The truth is no political objective can justify the massive physical destruction, persistent environmental contamination or human death and suffering these weapons of mass destruction would cause. Nukes are the ultimate in “destroying the village in order to save it.“

Another way we are affected is the wasteful expenditures of our tax dollars. All the money wasted on nuclear weapons could be better used to address important local needs. The huge expense of militarized foreign policy creates deficits and cripples efforts to create real national security.

The bottom line is we would be more secure by eliminating all nuclear weapons. Since nuclear weapons were created, people have debated whether they ended WW2, prevented the Cold War from becoming hot, or kept America safe through “deterrence.”

Whether Mutually Assured Destruction (MAD) worked in the past or not is really irrelevant. It is an insane policy for the future. So why don’t we chart a new direction?

Abolishing nuclear weapons, as the preamble of the treaty says, is the “only way to guarantee that nuclear weapons are never used again under any circumstances...”

In 1948, General Omar Bradley said the same thing, “Ours is a world of nuclear giants and ethical infants. We know more about war than we know about peace, more about killing than we know about living. The way to win an atomic war is to make certain it never starts. And the way to make sure it never starts is to abolish the dangerous costly nuclear stockpiles which imprison mankind.”

This week marks the 76th anniversary of the bombing of Hiroshima and Nagasaki. For 76 years we have ignored the only sane solution for nuclear weapons.

Now we have the opportunity, and the tool, to reverse that mistake and do what should have been done at the dawn of the nuclear age. But we can’t wait for the politicians, diplomats, or arms merchants to lead the way. Local people will have to make it happen.

This is why the International Campaign to Abolish Nuclear Weapons (ICAN) wants local people to pressure their representatives at all levels to sign the “Parliamentary Pledge” to support the treaty.

The ICAN “Cities Appeal” seeks to have local city and county resolutions passed asking their national governments to join the treaty. You can join the effort and get resources to organize local efforts.

There is no better way to remember the tragedy of Hiroshima and Nagasaki than working to abolish nuclear weapons.