Some are more equal than others 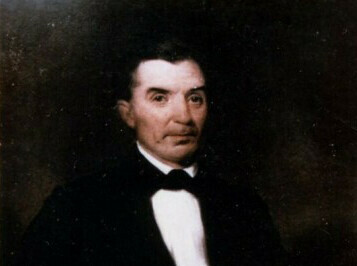 Meet Isaac Franklin, who at one time co-owned the largest slave-trading business in the United States.

There’s nothing but trouble in the city on the Potomac

When “The Chosen One” Donald “Jesus” Trump arrived at the city on the Potomac River in 2017 to swindle the “losers” for at least for four years and maybe forever, his ascent to attack and loot the treasury of the United States was sure to cause trouble. When trouble is around, I always think of the lines “Ya Got Trouble” in that great musical The Music Man:

“We’ve certainly got trouble right here in river city!
Remember the Maine, Plymouth Rock and the Golden Rule!
Oh, we’ve got trouble. We’re in terrible, terrible trouble.
That game with the 15 numbered balls is a devil’s tool!
Oh yes we got trouble, trouble, trouble! With a “T”!
Gotta rhyme it with a “P”! And that stands for Pool!!!”

Except in this case with the anti-sane “I alone can fix it” Trump, the “P” stands for “Power”!

Before I get to the bad “troubles” in the river city, perhaps the only way to get Trumplicans to vaccinate is to have the Democratic National Committee pay for this public service message: “Trumplicans: Do not on any account get a vaccination! The critical chip shortage for cars, electronics and appliances is caused by the over-production of a billion microscopic chips in vaccines that will force you to vote an all-Democratic ticket in the 2022 elections!”

I see Holmes County in Ohio which voted 81% for Trump has vaccinated only 15% of the adults while Democratic counties going for Biden have vaccinated 90%. Will that change the vote in 2022?

Karen Gemar asked this question in the Fargo Forum: “Do you worship God or Anthony Fauci?” Several Coloradans have recently caught the Black Plague, which has killed millions in its recorded existence of 5,000 years. God has not come up with a vaccine for the flea and rat plague yet. I’m going to worship Dr. Fauci for awhile.

Some critical race facts about the ‘Lost Cause’

Trumplicans think they have another winning political issue by keeping Critical Race Theory in the news 24/7. Fox News has run 1,300 stories about it lately. Trumplicans have started 165 anti-CRT groups across the country, pushing the “Lost Cause,” a fake campaign maintaining that the Civil War was based on fighting for a superior way of life, not about maintaining slavery.

After all, slavery had been good for the Blacks. The slaves had been treated well and were happy workers!

After living in the South for three years in a highly segregated society during Jim Crow One, Corky and I have traveled extensively through all of the Confederate states, from St. Augustine to Fort Sumter, from Rosewood to Chattanooga, from Andersonville to Atlanta, from Birmingham to New Orleans, from Vicksburg to Galveston. I still remember asking a docent in a state-sponsored museum in Vicksburg why there were no drawings, no photos, no stories, no artifacts about Blacks when Vicksburg was attacked. I got an angry stare.

That’s why we still have 1,880 statues, monuments and memorials still standing, commemorating the “Lost Cause.” We already have the “Big Lie.” What do we call the “Lost Cause?” The “Enormous Lie?” Or is it just #30,999?

Trumplicans are trying to prevent the accurate teaching of real history in a futile attempt to prove the Divided States of America is not a racist nation. Good luck with that “history is bunk” line.

If we are to have a functioning society we must teach about slavery, the massacres of Rosewood and Tulsa, the lynching and murdering of more than 4,000 Blacks, the internment of Japanese, the Chinese exclusion acts, the hundreds of broken Indian treaties, the many trails of tears, and why 600,000 of our citizens are homeless each night.

At one time Black leader Frederick Douglas encouraged Black men to enlist in the Union Army: “In your hands that musket means liberty, and should your constitutional rights at the close of this war be denied..your brethren are safe which proclaims your right to bear arms.”

But those Blacks who fought in our wars were murdered when they tried to vote.

A cartoon in the latest New Yorker says it all about today’s Congress. A politician is evidently addressing a press conference with many flags and White compatriots standing behind him: “We’re not doing anything because we don’t want to and you can’t make us.”

The Washington Post reported a startling statistic supplied by the D.C. police: In the last three years police investigators have picked up 40,302 bullet casings within our capital boundary. They found 2,759 casings in one square mile!

One must assume they missed thousands in the grass and bushes.

How many bullets went into bodies?

One must assume that the triggers were pulled aiming at something or somebody. Do you think it was at somebody? I do. It’s what’s happening.

Jazz poet Gil-Scott-Heron wrote this song in 1970 after we spent billions putting men on the moon, but it is appropriate to sing it today because now we have three billionaires who often pay no federal taxes neglecting the planet and its life while blowing billions on space misadventures:

Let’s deal some more with Critical Race Facts. Even if there was a “California Dream” at one time, it is on life support for many people of color. Blacks make up only 6.5% of the population but are 40% of its homeless population.

Many California cities have large single-family house zoning which restricts the building of low-income public housing. In other words, California was the innovator of racist housing policies.

Meanwhile, back in New York City where billionaires surround Central Park in their multi-million condos and apartments and are close to heaven on Billionaire’s Row, we have 500,000 renters who owe $2.2 billion in rent.

Congress, of course, went home for their August break without extending the eviction or utility disconnection moratoriums – and Sleepy Joe has not figured out what to do about it.

The New York renters are mainly composed of the million workers who lost their jobs to the pandemic. The renters are also made up of people who hate big oil, health insurance companies, big tech companies like Amazon, Microsoft and Google, but reserve the most hate for Wall Street, where hedge funds and investment bankers own everything and just exchange money in the world’s greatest casino, the stock market.

If Joe Biden and Congress do not act, the homeless lists will increase dramatically and tragically.

Hunger in America – while Bill Gates’ home has six kitchens

We have all seen the miles of cars waiting to pick up food at food banks – in the richest country that provides our part of the world with food. Many people waited in their cars for 12 hours for food. Some slept all night in their cars.

Food insecurity is defined as lacking access to sufficient nutritious food. During the pandemic four of 10 people using food banks are there for the first time in their lives. One in eight Americans in 2021 are experiencing food insecurity. In other words, they are not sure what and where they will eat this week. That includes at least 13 million children – or one in six children.

Federal statistics indicate as early as 2019 before the pandemic one in four Native Americans, one in five Black, one in six Latino-Hispanic, and one in 12 Whites suffered from food insecurity. Feeding America, the largest food bank, served enough food in 2020 to provide every U.S. resident three meals a day for six days.

Seven of the 15 most food insecure counties in the country are in Kentucky, the home of Republican Senate Leader Mitch McConnell and Libertarian Senator Rand Paul. Republican states Mississippi, Arkansas, Alabama and Louisiana have the highest levels of hunger. Los Angeles County, the most populated county, has 1.6 million food insecure people.

Actually, food insecurity is very high in rural America although that’s where the food is grown. In the southern Black Belt, Lowndes County, Alabama has 26.6% living in poverty, has the highest unemployment rate in the state, the highest COVID-19 infection rate, and has 29.5% without sufficient food.

In South Dakota, the nine counties that have a majority of Native Americans are all above 20% in food insecurity.

We know a lot about Ben Franklin. Ever heard of Isaac?

Isaac Franklin, no relation to Benjamin, made it big in the U.S. press when he died in 1844 because he was known as a Tennessee “pioneer” in the business world who had made millions, equivalent to $435 million in today’s dollars.

He was the leader of the firm of Franklin, Armfield and Ballard, a trio that specialized in slave and sex trafficking. They made millions transporting slaves from Africa to Alexandria, Virginia to New Orleans and Mississippi. They operated slave ships, slave auction human warehouses, and another trail of tears, sometimes marching shackled, ill-clad, starving slaves 1,000 miles on foot to southern slave auctions.

Anti-slavery newspapers called the trio “The Cannibals” because they traded in blood.

The three bought lavish town houses and plantations and turned many females into Black sex slaves, fathering many children on their property. Franklin and Armfield finally married White women – so they both sold all of their own slave offspring in the southern slave markets to be used as cotton pickers.

Isaac’s Louisiana plantation was confiscated during Reconstruction and turned into the state penitentiary now known as Angola, the current hellhole for Black inmates.

In all my 83 years of reading thousands of books and taking a dozen history courses in the K-19 levels, I had never read or heard of Isaac Franklin. It is critically important for all members of our society, if they wish to remain democratic, to know and understand our past so we don’t repeat it.

Franklin’s life is a Critical Race Fact, not a Theory. Frederick Douglas wrote: “No man can put a chain around the neck of his fellow man without at last finding the other end fastened about his own neck.”