Water is life, life is water 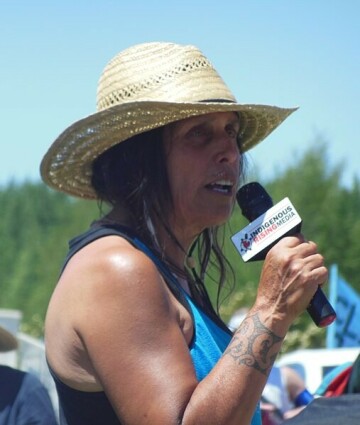 Winona LaDuke, speaking at a Line 3 protest in June, will host the daylong music and message event Water Is Life at Bayfront Park beginning at noon Wednesday, Aug. 18.

Winona LaDuke says it was a no-brainer to hold the Water Is Life: Stop Line 3 festival in Duluth.

“That’s Superior, a fifth of the world’s water,” she told The Reader a week before the quickly organized Aug. 18 event at Bayfront Park that features an all-star concert led by Eau Claire’s Grammy-winning Bon Iver.

“We are deeply humbled to perform and gather alongside other musicians, artists, poets and Indigenous elders in celebration of water and in resistance to the Line 3 pipeline threatening the waterways and Anishinaabe lands of northern Minnesota,” Bon Iver wrote on Twitter. “All proceeds will go to Honor the Earth as the organization assists in urgent climate justice effort.”

With the music will be messages against Enbridge’s Line 3. In a press release announcing the event, it is billed as “a celebration of water as the fundamental life-giving resource of Mother Earth, and a full-throttle resistance of music and song against the Line 3 tar sands oil pipeline currently snaking its way through the waterways and Anishinaabe lands of northern Minnesota.”

“We’re gong to be fighting over rocks and pipes the rest of our lives if you want to protect the water,” LaDuke said. “That’s the economy. Wild rice, fish, maple syrup and water. It’s not pipelines and mines. We want to be part of the next economy and be there for a better Duluth and Superior.”

Talk of the economy relates directly to the battle with Enbridge and its Line 3.

Supporters of Line 3 tout the high-paying jobs (4,200 of them is the figure most-often used) of the workers building the 1,000-mile replacement line – 330 of those miles in northern Minnesota, broaching three reservations – to eventually carry tar-sand oil from Edmonton, Alberta, to Superior. The Minnesota portion of the pipeline is all that remains to be done.

Opponents of Line 3 fear environmental damage, particularly to the Mississippi River and Lake Superior, as well as broaching land on three Indian reservations.

LaDuke was one of seven women arrested on July 19 while protesting Line 3. She spent three nights in jail and upon her release, in an interview with Amy Goodman of Democracy Now!, LaDuke said: “It’s a civil crisis when a Canadian multinational controls your police force. You know, I thought the police were supposed to work for the people and not for the Canadian multinational, but that’s not what’s happening up here. A Canadian multinational has taken our civil rights, clearly, you know, myself, among many, being put in jail. I mean, that’s the Enbridge way: control the police of the state of Minnesota and shove your pipeline through. You know, it’s so wrong from every aspect.”

She also noted that investors are increasingly pulling out of the fossil fuels sector. “Who wants to have the last tar sands pipeline?” she said. “It’s the end of the party.”

LaDuke has also been critical of the Minnesota Department of Natural Resources for allowing Enbridge a variance to its water permits despite the widespread drought, allowing the company to increase pumping from 540 million gallons from local lakes and rivers to 5 billion gallons.

“They knew about the appropriation request in November. In December, they began...studying it. And they didn’t even notify the tribes until May. And then they issued the permit in June – 5 billion gallons in the worst drought in history,” she told Goodman.

Tickets are $65 and the event begins at noon. All proceeds will benefit the indigenous and women-led Honor the Earth nonprofit in its fight against Enbridge’s Line 3 construction in Native treaty lands.