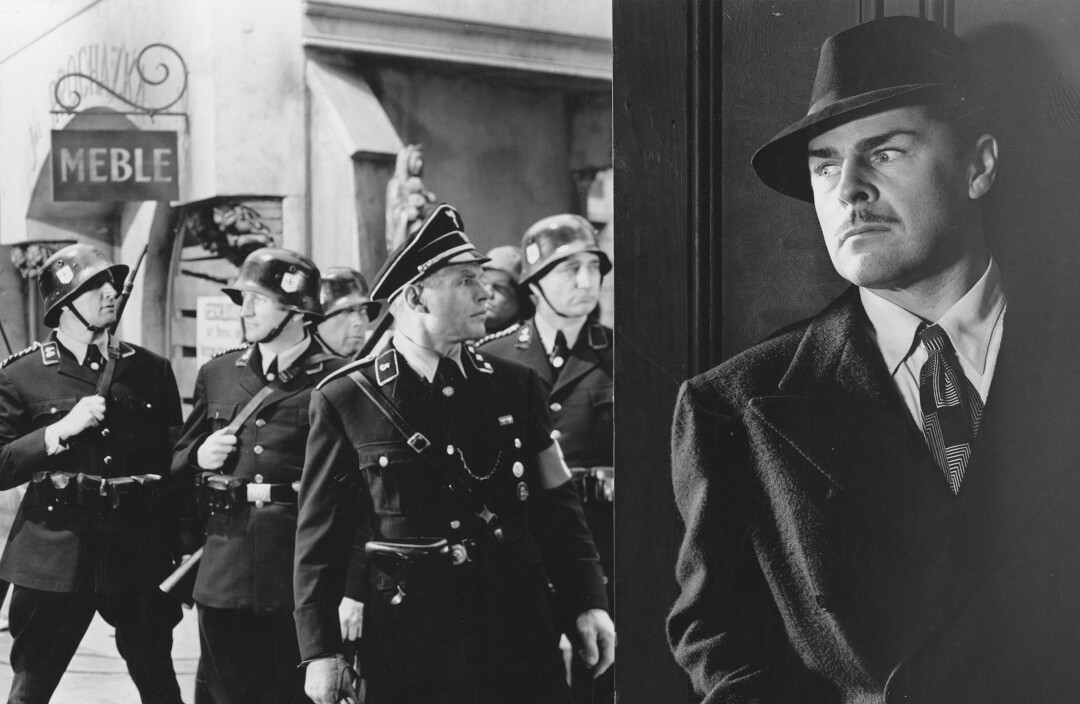 Dr. František Svoboda (Brian Donlevy) hides from Nazis after shooting the “Hangman of Prague” in Fritz Lang’s 1943 Hangmen Also Die!, based on the real-life 1942 assassination of Reichsprotektor Reinhard Heydrich by Czech resistance fighters.

I cannot imagine what audiences in 1943 thought of Fritz Lang’s Hangmen Also Die! It must have been scarier than any horror movie Universal was producing because it is a story based on reality and the monstrous Nazis in this story of the Czech occupation make Frankenstein and Dracula seem like household pets because the have the power of life and death over the entire population. It is easy to believe they would have no compunction about wiping out this entire “inferior race” if they weren’t needed as slaves for the Nazi war machine.

I’ve wanted to see this film for a long time, and it finally just recently popped up in Amazon Prime.

Fritz Lang was a master of German Expressionism, as seen in two of his greatest German films, Metropolis (1927) and M (1931), which showed the way for film noir, a genre Lang embraced when he left Nazi Germany in 1933.

Lang first went to Paris, where he made one film with Charles Boyer, before heading to Hollywood, where he made 23 feature films in a 20-year career. He became a naturalized citizen in 1939.

One of my favorites among his Hollywood film noir projects is The Big Heat (1953). It’s about as tough as they come.

And so is Hangmen Also Die! The tension rises to a fever pitch as the Nazis brutalize the population in order to find the man who assassinated Reichsprotektor Reinhard Heydrich. This movie, made in 1943, came the year after Czech resistance fighters actually assassinated Heydrich, who was known as the Hangman of Prague. Heydrich was a top official in the dreaded SS. He is credited with organizing Kristallnacht, coordinated attacks against Jews throughout Nazi Germany, and was a chief developer of the “Final Solution to the Jewish Question,” which is also known as the Holocaust. Hitler himself referred to Heydrich as “the man with the iron heart.”

There is only a brief appearance at the beginning of the film to give the audience a feel of the terror that Heydrich brought to the Czechs. He is played by a German actor who left Nazi Germany because he was a homosexual. Hans Heinrich von Twardowski began his acting career in Robert Wiene’s early silent horror film, The Cabinet of Dr. Caligari, and even had a role in Fritz Lang’s 1928 German silent, Spies.

Twardowski dominates the screen with his obviously evil personality. He looks like a young Col. Klink, but with an obvious sadistic mean streak. He is the only actor in the movie who speaks nothing but German, which adds to his menace.

We see nothing of the actual assassination (it took Heydrich a week to die after he was attacked). The story picks up with Dr. František Svoboda (Brian Donlevy) trying to hide from a horde of Nazis searching for the shooter.

A young woman, Masha Novotny (Anna Lee), buying turnips and cabbage from a greengrocer sees Svoboda run one way down a street, and when the Nazis stop to ask if she has seen a man running, like a good Czech she points the Nazis in the opposite direction, thereby implicating herself and her family in the remainder of the story.

With no leads to follow, the Nazis believe Miss Novotny misdirected them so decide to concentrate on her and her prominent father, Prof. Stephen Novotny (Walter Brennan in a rare role as an intellectual). 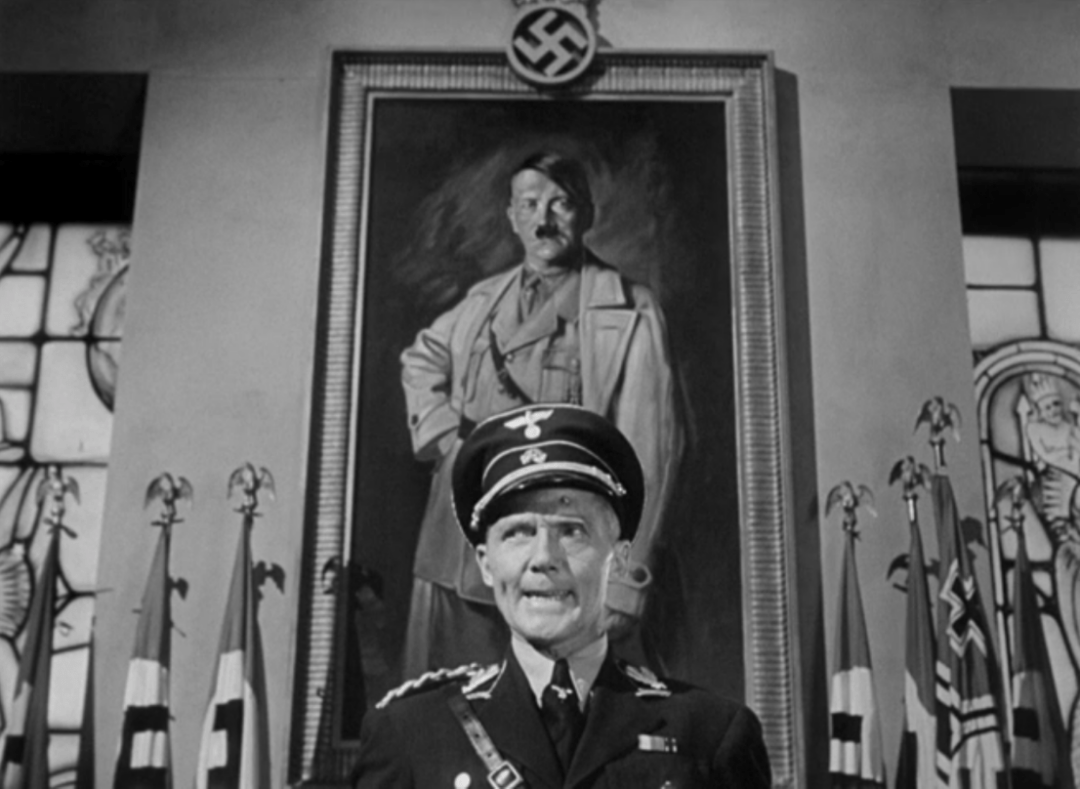 German actor Hans Heinrich von Twardowski has a very short but memorable role as the titular hangman of Fritz Lang’s Hangmen Also Die!, Reichsprotektor Reinhard Heydrich, Twardowski made his first film appearance in Robert Wiene’s 1920 horror movie The Cabinet of Dr. Caligari, and even appeared in a previous Fritz Lang film, Spies in 1928. The homosexual Twardowski left Nazi Germany for Hollywood, where he was kept busy playing Nazis (including a small role in Casablanca).

Even though you may not know his name, you will certainly recognize character actor Gene Lockhart, who here plays Czech beer baron Emile Czaka, who pretends to be a patriot but is actually a Nazi collaborator and the Czech Quisling. He is particularly slimy.

Also worthy of mention is a sadistic, knuckle-cracking Gestapo officer who takes great delight in torturing women. I’m sorry I did not catch this actor’s name because his performance is worth the price of admission. Evil incarnate. And as I always say, your movie is only as good as your bad guy. Lots of bad guys here.

Dwight Frye, one of my all-time favorite character actors, also has a small speaking role as a Czech patriot, which is nice to say because he was usually typecast with some kind of mental unbalance, perhaps most memorably as Renfield in Tod Browning’s 1931 Dracula and later that same year as Frtiz, the hunchbacked assistant to Colin Clive’s Dr. Frankenstein.

Another interesting aspect of he movie is that the story was written by Lang and a fellow German exile, Bertolt Brecht. The Communist playwright is credited here simply as Bert Brecht.

The story is that Brecht desperately wanted to break into Hollywood as a screenwriter, but his ideas weren’t well received, such as turning The Communist Manifesto into a cinematic epic. Hangmen Also Die! is the only Hollywood script he worked on that made it to the screen. While he reportedly worked on the screenplay with experienced screenwriter John Wexley. Brecht is only credited with Lang for providing the story. He tried to have his name added to the credits but could not prove to the Screenwriter’s Guild that he had contributed anything to the script.

The story plays loosely with the retribution meted out by the Nazis for Heydrich’s murder. In the movie the Nazis begin killing writers, academics, priests and people of influence. In reality, the Nazis murdered the men and boys of two suspect villages and sent the women and girls to concentration camps.

The resolution of the film involves an elaborate hoax that sets up Czaka the brewer as Heydrich’s assassin.