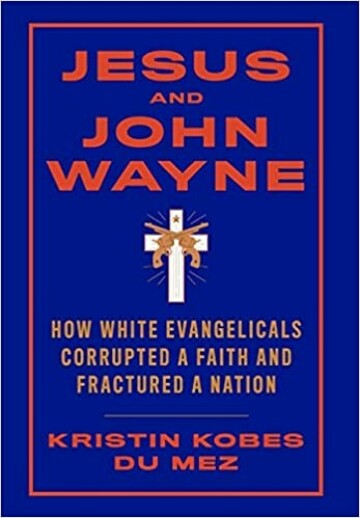 There have always been ill educated and superstitious people who threaten society. Sometimes it has required firm leadership to enforce good science for the benefit of all.

General George Washington and his yet-to-be nation faced an epidemic of smallpox as his troops faced the mightiest army in the world.

1775-1782 was a much less scientific time and vaccinations were a much messier affair. A smallpox vaccination involved cutting the skin and wiping the wound with infected pus.

What kind of man would force his terrified wife and his entire army corps to undergo such an experience?

I ask this question with the Duluth School Board in mind and with the first 100 pages of a new book under my belt. By the way the answer to the question is – a person (of any gender) with cajones.

The book I’ve begun is Jesus and John Wayne. My seminary-educated wife devoured it in a couple days and now I’m doing the same. The book is about what has happened to the Republican Party during the 70 years of my life.

Unlike little-old-agnostic-me, Kristin Kobe Du Mez comes from the heart of the religious movement called “evangelism.” She explains how a sexy young Bible Thumper, Billy Graham, began fusing Hollywood’s version of manhood, John Wayne, with the biblical authority of Jesus.

I was just a baby back then whose parents were reading the child rearing tips of the “permissive” Dr. Spock. Spock was a boogeyman for southern Christians who yearned for the kind of tough love that had kept “Nigras” in their place, unschooled, locked up and without the vote.

Manliness and Jesus would fuse more tightly in the Reagan Era. Today they are one with Donald Trump’s Old Testament leadership. (For further reading see here.)

But Trump’s virility failed to win him reelection, leading to a fifth column, insurrection and a resistance to science that George Washington would never have put up with.

Along Trump’s Red corridor in the state of Arkansas, 60,000 doses of vaccine are about to expire unused. This really pisses off the grandfather in me because it could kill my unvaccinated grandchild.

I doubt that I’m the only pissed off grandparent. The Delta variant is so virulent that it’s spreading like a California wild fire, even in bodies protected by HRNA vaccinations. It makes vaccinated people like me a thousand-fold more infectious than the intubated victims who died in the first wave of Covid 19.

Last Friday on PBS’s Washington Week the eminently reasonable “conservative” commentator David Brooks was shaking his head over his old pals from the Reagan Era who are championing today’s jolly ignorance. From the transcript:

“I saw a segment of Dinesh D’Souza on You Tube today, which was him showing bits of the testimony, really emotional testimony, [of the Capitol police] and Dinesh D’Souza is laughing at them for being wimps and cowards.

“And it was repulsive. And to think that I spent my career as part of, like, a community, and half of the community went off in the never-Trump world, which I did, and then the other half went completely bonkers, in my view.

“And so Dinesh D’Souza is part of that community, and Tucker [Carlson] - and all the people we grew up with. And so that’s in my little world. But that’s the Republican world, that [went] off in radically different directions from where they were in the Reagan years.’

Dinesh D’Spouza may be quarantined on You Tube but Tucker Carlson lives in Rupert Murdoch’s FOX penthouse where science and democracy have gone to die. His listeners are the one-third of Americans who are refusing the vaccine. And Tucker Carlson is cheering them on.

As a result, the unmasked 70 percent of us who are now immune, even to the Delta variant, will be spewing it out to Tucker’s listeners. As they sicken new and possibly more virulent Coronavirus variants will be evolving in their bodies to plague the world’s six billion unvaccinated people.

There are twenty more letters in the Greek alphabet before we reach an Omega variant.

I am close to betraying Will Rogers and his friendly old fashioned statement of faith, “I never met a man I didn’t like.”

I think I could exclude college smart ass Tucker Carlson. Tuck wrote in his college yearbook that he was a fan of the ex-cop who murdered America’s first elected gay politician. Though I’m not sure I like him I might just organize a Tucker Carlson Fan Club. He’s thinning out the ranks of the anti-democratic Fox crowd by cheering on their anti-vaxxer sentiments.

A new school year is about to dawn in Duluth with thousands of unvaccinated 11-and-unders, among them my grandson. For the unmasked and infected Tucker crowd here are my thoughts:

When I was about to rejoin the Duluth School board a decade ago our school nurses were imploring the board to protect all children. They asked that we require every child to be fully vaccinated against the dread childhood diseases before being admitted to school. After killing half a million Americans last year I think coronavirus deserves to be on that list too. Until we get the job done children should be masked.