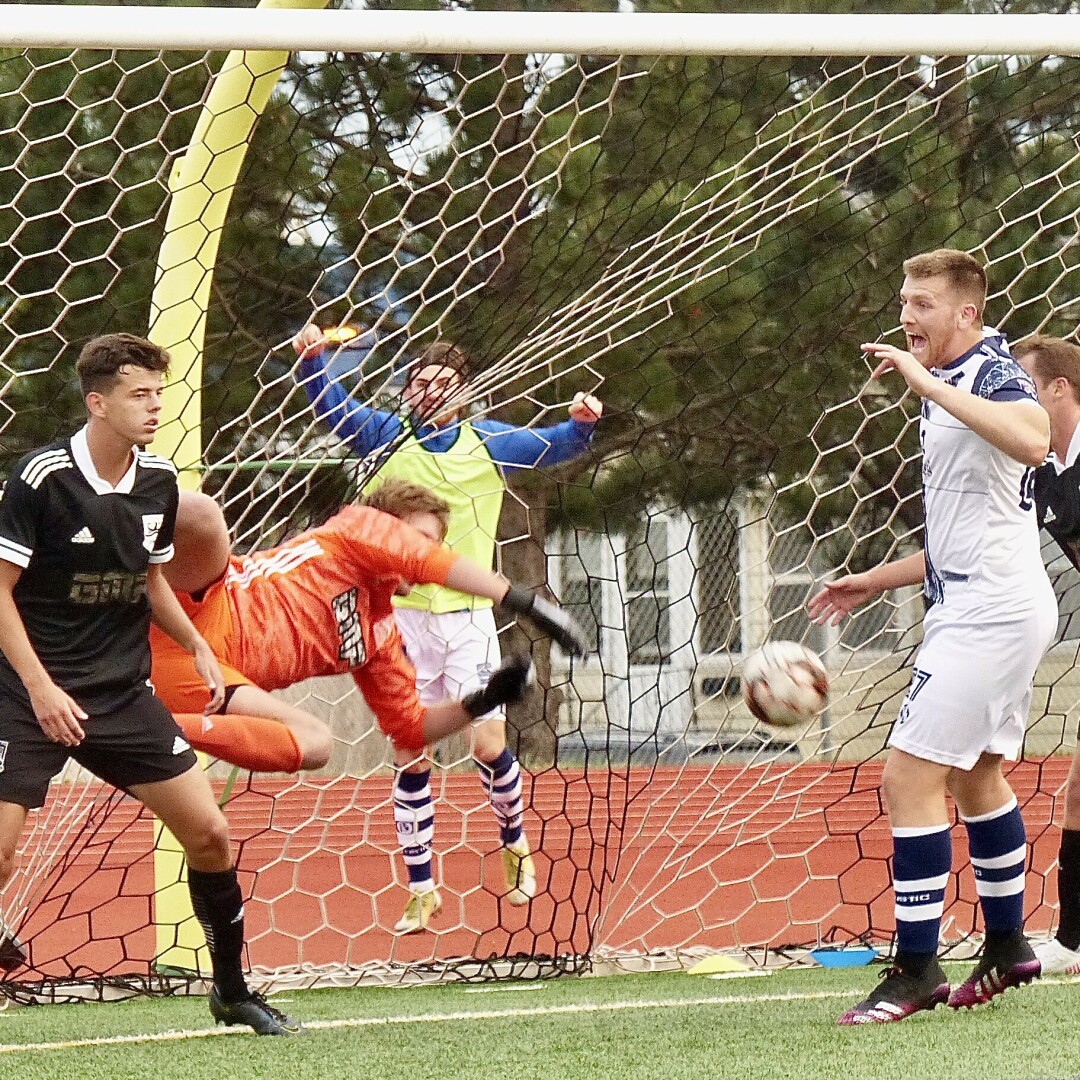 Jake Starling of Duluth FC deflected the ball into the Carpathia goal for a 1-0 lead in their Premier league playoff at Public Schools Stadium. Photo by John Gilbert.

Ah, the lazy, hazy, crazy days of summer – with the emphasis on hazy, because of all the wildfires-induced smoke being blown from Canada and Northeastern Minnesota – right to the tip of Lake Superior. That can lead to some spectacular and memorable visions.

One of the great light shows of our lifetimes came Monday night, when lightning outbursts and vivid shafts of lightning flashed down on the Wisconsin shore of Lake Superior, drawing a large crowd of vehicles to vantage points like Brighton Beach, near Lester River. A few minutes earlier, about the time an incredibly heavy and windblown downpour washed out the Duluth Huskies game in the seventh inning, when the Huskies had two runners on base but had to halt play and accept a 3-2 loss to Mankato.

My wife, Joan, our younger son Jeff and I were driving back to Duluth from a tacos and hot dogs treat at Gronk’s in South Superior when the rain hit at its heaviest, causing cars to pull over. I circled around and parked, hazard-lights flashing, off the street under the overpass for a few minutes until we could see far enough ahead to venture across the Blatnik Bridge. As we got onto the Duluth side, we saw what looked like an enormous orange lantern on the hilltop to the west, and it took a few seconds to realize the setting sun was battling through the black cloud bank to show the world an unforgettable glimpse of nature’s artistry.

Just a few days before that, a different and maybe prophetic natural phenomenon occurred. I was walking the sideline at Public Schools Stadium as the sun was setting over the top of our hillside, and there were no clouds to interfere with the view of the perfect sphere of orange that lit up the sky. The haze-embellished orange glow over the hilltop seemed to be celebrating the good fortune of Duluth FC, which was battling Carpathia in a soccer playoff game. Then, right after halftime, the sun went down, and the beautiful glow in the sky – and on the field, which they call a pitch – for the BlueGreens.

Duluth FC stands for Duluth Football Club, with football taking on the olde English definition, meaning soccer, which they play by feet, and not football, which is played by running and passing, mostly.
We’re still getting the hang of soccer, the world’s most popular sport, and the National Premier League is hotly competitive. The Duluth FC outfit, whose nickname is “BlueGreens,” because they wear stuff that is blue or green, was facing Carpathia FC, which is a team from the Detroit suburb of Sterling Heights.

The team’s name comes from the Carpathia cruise ship that was close enough to rescue 705 people from the Titanic, when it sank after hitting an iceberg in the North Atlantic. The Carpathia came to an untimely end when its time as a troop ship ended by being sunk by a German U-boat in 1918, right near the end of World War II.

So much for history. Carpathia appeared to have its soccer fortunes sank that night when the BlueGreens gained a 1-0 lead on the first goal of the season by Jake Starling, who cut in front amid a cluster of defenders and deflected the ball into the net in the 27th minute. After beating the diving goalkeeper, Starling was engulfed by teammates in celebration. Barely 10 minutes later, Sidney Warden caught a lead pass and burst up the middle, making a quick fake to pull the goalkeeper aside and drilling a 20-yard shot for a 2-0 lead.

That remained until halftime, but about the sun finished going down and the sky turned dark, my biggest complaint about soccer reared its ugly head.

The goalkeeper looks tiny in the huge goal, so when a penalty kick is called, it’s a virtual certainty. Carpathia’s Owen Smith got one in the 79th minute, and Carpathia tied it 2-2 on another penalty kick in the 82nd minute.

Then the teams battled to the finish, and into overtime, where Alex Serwatka scored the game-winning kick, and it was Duluth FC that was sunk, 3-2.

My complaint is that a team, like Duluth, could hold a distinct upper hand in play, gain a solid lead with two remarkable goals, and be completely undone by a couple of penalty calls. I’m not saying they were bad calls, but the near-certainty of scoring on penalty kicks leaves a distasteful finish to such an outstanding season for Duluth FC. 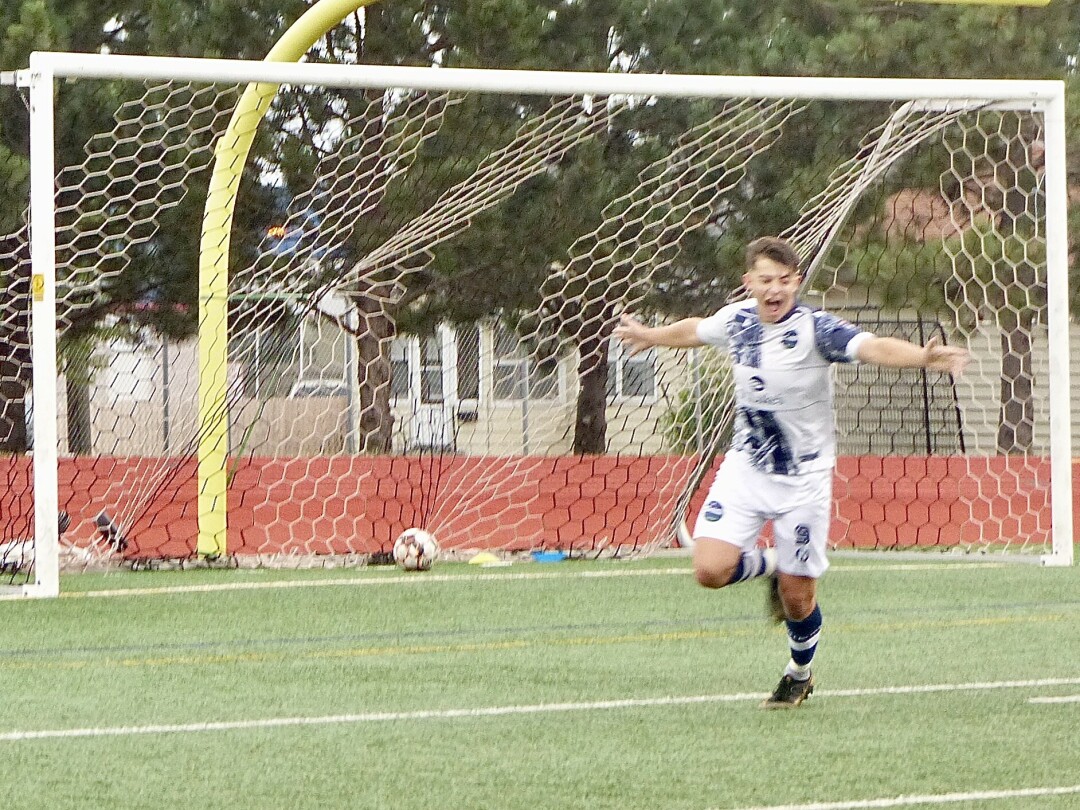 The Duluth BlueGreens took a 2-0 halftime lead when Sidney Warden scored and peeled off to celebrate.

The Twin Cities media is falling all over itself to praise Wild general manager Bill Guerin for tearing up the roster and building for the future. Buying out the contracts of Zach Parise and Ryan Suter may work out in the long run, but I don’t like its projection short term.

After Guerin ordered reduced playing time and prominence for Parise, then the team decided to not dress him to end the regular season and start the playoffs, they finally let him play. All Parise did was score a winning goal against Vegas, and prove to be the most effective forward with his hustling, whirling-dervish style of attacking.

They might miss that attribute in the coming season.

And on defense? There is no question they will miss the size, force and stabilizing effect of being without Suter and former UMD defenseman Carson Soucy.

The outstanding returning defensemen – Matt Dumba, Jared Spurgeon and Jonas Brodin – are greatly skilled with the puck, but none is big, strong and forceful enough in front of the Wild net the way Suter always is, and the way Soucy has proven to be while established the top plus-minus numbers on the team the last two seasons.

Summer high school hockey is usually low-key and mostly fun, but this summer there were some intriguing undertones. The Lakeview Classic at Mars Lakeview Arena showed that Cretin Derham Hall will be a powerhouse team in high school hockey this season. The Raiders whipped Mahtomedi 7-1 to open play, while Hermantown, the perennial favorite against the field at that tournament, was knocked off 3-1 by a strong Benilde-St. Margaret’s team. Cretin then beat Benilde 6-4 to reach then final.

In consolation play, Mahtomedi and Hermantown tied 3-3 but Mahtomedi won in a shootout, then whipped Monticello 8-1 in the consolation final. Hermantown rebounded to blitz Hutchinson 10-0 as coach Pat Andrews played most of his prodigious depth.

The Hawks played without star junior Zam Plante, who was preparing to leave for Team USA’s Under-17 team, which will play in the Ivan Hlinka Memorial tournament in New Jersey.

A couple of surprises should not have been surprises for Hermantown. Max Plante, the sophomore brother of Zam Plante, did play and showed some of the same incredible skills as his big brother. Max got the only goal in the 3-1 loss to Benilde, rifling a wide-angle shot into a keyhole above the goalie’s shoulder. He didn’t get a goal in the 3-3 tie, but scored both shootout goals the Hawks got against Mahtomedi, and Andrews wasn’t sure who all scored in the Hutchinson game.

A lot of observers compared Zam Plante to Mark Pavelich when he led the Hawks in scoring last season, and Andrews searched for a comparison for Max Plante after the tournament before coming up with Mike Antonovich. Their dad, Derek Plante, probably won’t protest too much if his kids are compared to Pav and Anton.

“We got exactly what I wanted out of the tournament,” said Andrews. “We got two tough games, and a lot of guys got some experience. I also have to decide whether to play Zam and Max together or on separate lines. I my hove to try them together, berceuse they both see the game the same way and they’re unbelievable together. I also would hvve to say that we have the deepest goaltending I’ve ever had. We’ve got four kids who can play.”

The added depth came from Dane Callaway, a sophomore who transferred from Duluth East after standing out as a freshman for Mike Randolph’s Greyhounds last year. When Randolph was forced to resign by an administration that decided to not renew his contract after 32 years, the Callaways moved to Hermantown.

Kaden Nelson, the top returning scorer to East, also transferred to Grand Rapids, and sophomores Griffin Benson, Ty McCall, Garrett Olek and Darik Olson – all of whom played on East’s top Bantam team last year – are all at Marshall for their sophomore seasons.

Callaway played the second half of the Benilde game for Hermantown, and blanked the Red Knights, including two spectacular saves on breakaways, and the only goal he gave up was on a slick 2-on-1 play by Mahtomedi in half of that game.

The other surprise, to those not following in their programs, came at the Minnesota Summerfest at Bloomington Ice Garden.

Mike Randolph, whose days behind the bench apparently ended after 36 years by his resignation, was right there on the bench. No, not for Duluth East, but for St. Thomas Academy. Randolph and St. Thomas Academy’s third-year coach Trent Eigner are close friends and share mutual respect for each other.

When Randolph resigned, Eigner offered him the chance to join his staff. Having first turned him down, Randolph reconsidered and he and his wife, Ginny, decided it wouldn’t be a bad idea to move to the Twin Cities, where they could be closer to three of their four children and their grandchildren.

So Randolph, who ranks third in all-time coaching victories at 658 behind Roy Nystrom of Albert Lea and Lorne Grosso of Rochester Mayo, called Eigner back, and he was welcomed to drive down and join the Cadets staff.

“It was awesome, we had a blast,” said Eigner, after the Cadets beat Lakeville North, Cloquet-Esko-Carlton and Champlin Park, then beat Maple Grove 4-0 and lost 5-2 to Rogers in playoffs.

Randolph, who has nothing but praise for the majority of parents he experienced at East, and can look beyond the “vocal minority” of critics, said he had never experienced the welcoming feeling he got from all the St. Thomas Academy players and all the parents who thanked him for agreeing to join the staff.

Randolph said he and Eigner had a good time sharing duties on the bench, and said he would never intrude on Eigner’s role as head coach.

But after the two discuss the matter, it’s possible Eigner might consider naming Randolph Associate Head Coach, instead of assistant, because then every victory they can coach would contribute to Randolph’s record number.

The overplaying hype for various U.S. teams at the Tokyo Olympics blew up in the media-induced fervor when the U.S. women’s soccer team was upset in their opener against Sweden, the men’s basketball team was upset by France, the women’s gymnastics team lost the gold to Russia and Simone Biles dropped out from the sheer mental stress of expectations, the men’s gymnastics team also faltered, and the women swimmers fell short of expectations.

Too much hype gets wearisome, and NBC’s overbearing focus on the U.S. athletes, which caused fawning and emotional views of American athletes at the expense of allowing us to see all the countries in the magical opening ceremonies, was just the prelim. Constant boasting about all the medals U.S. athletes have won overlook the fact that there are something like 613 athletes representing the U.S. at the Olympics – dwarfing most competing countries. Just let us marvel at all the athletes, and celebrate excellence regardless of where they’re from.