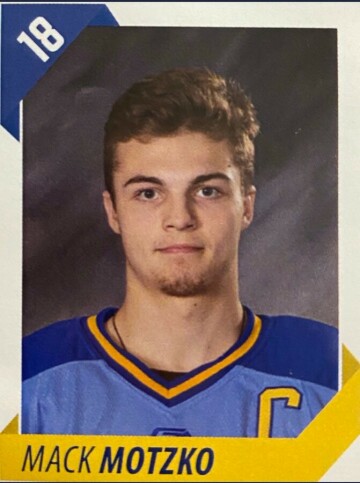 COCHISE – I was on the phone with my son William late this morning. He is in Arizona at this time working but on a day off. I had my laptop on and was paging through my usual morning reading when I came across the story of Gopher Men’s Hockey Head Coach Bob Motzko’s son Mack losing his life in a car accident the night before.

To say I was stunned would be an understatement. Mack Motzko was 20 years old with his whole life still out in front of him. All kinds of thoughts immediately flooded my mind at once, leaving little space for any mental clarity. There was a thought of the unimaginable grief the Motzko family must be going through at this moment. And then the thought that the entire State of Hockey would have no rivalries at this moment, that we would all rally behind the Coach and his family and lift them up as best we could.

I thought of how quickly something like this can occur, here one moment, gone the next – the unrelenting finality of that being incomprehensible right now. And being on the phone with my own son the moment I saw this harsh news; I was battling to stay composed. But he didn’t know that. Anyone who is a parent gets it. The words of “thoughts and prayers,” condolences, and so on seem so inadequate at this point. I am thinking of Coach Bob, his family, and friends, of course, but moreover, I’m thinking of the always precious thought to remember to hug your kids every day and tell them that you love them ...

THE MINNESOTA VIKINGS have dismissed Offensive Line Coach Rick Dennison for his refusal to get a Covid vaccination. Or have they? I’m seeing other reports stating that he hasn’t officially been fired but that the club is in discussions with him about his “status.” With NFL training camps set to open in less than 48 hours, this could upset the Vikes apple cart quite a bit.

Dennison had been on the staff the past two seasons and received a lot of recognition for his role in the quality of the Viking run game. But the NFL has issued a memo to all 32 of its teams stating that vaccine compliance is of the utmost importance and that any club that was responsible for having a game canceled would forfeit that game. They are taking a hard stance and are seeking to have a regular-season free of the pandemic disruptions that occurred last season. So, I’m not sure where this matter will go, but I offer a hearty “stay tuned” for all fans.

I MIGHT BE THE only one considering this, but an interesting situation happened at the NHL Entry Draft on Friday night. For the 2021 draft, the Arizona Coyotes had forfeited their first-round selection due to some misconduct regarding scouting combine rules. The Yotes were scheduled to select in the 11th position of the first round but had that pick taken back by the league.

So on Friday, before the event took place, the Yotes and Vancouver Canucks engineered a deal that exchanged some players, but get this, the Yotes also picked up the Canucks 1st round pick in the deal, actually moving them up to the nine slot for that evening’s proceedings. Holy “rub the league’s face in some dog-duty” Batman!

Apparently, nothing against the current rules occurred, so the deal stands. Aside from the cost of re-entering the 1st round, how is this punishment? Is a rules change initiated by the league in order to prevent this from happening again? I was watching this unfold and in disbelief. After the Tampa Bay salary cap-no salary cap playoff maneuvering, and now this issue, I’m left to ponder how many more situations like this are in the NHL policy and guidelines. Here are our rules, and for you smart guys out there, you can certainly think of ways around them! Nineteen teams behind the Yotes in the draft order did nothing wrong but had to sit back and observe this folly. Am I missing something here, or was this not a “sporting” move on behalf of Arizona?

THE MINNESOTA WILD by all accounts, had a strong entry draft haul over the weekend. They obtained a lot of “value” picks and perhaps acquired the goalie of their future, along with some other very solid prospects. The club’s top two first-round picks were ranked higher before the draft but had dropped a few positions. The team selected netminder Jesper Wallstedt with the 20th pick. Guerin made a deal with EDM to move up two spots to land Wallstedt before possibly losing him to another club. With the 26th pick (from PIT for the Jason Zucker deal), the team selected D-man Carson Lambos. Wallstedt was the #1 ranked European goaltender, and Lambos was the 11th ranked North American skater available.

Wallstedt was with Lulea of the Swedish league this past season while Lambos played for Winnipeg of the WHL. How this draft affects any plans with current WILD netminder Kappo Kahkonen is unclear. He was unprotected in the recent expansion draft but went unselected. In addition, Cam Talbot is under contract for two more seasons. Positional depth can never hurt, though, and the team’s plans for that position will reveal themselves soon enough. Lambos is known as a physical, fast player. At 6’1” and 197 lbs., he has room for some weight on his frame.

Like many fans, I like to read the draft “grades” assigned to teams post-draft. The WILD mainly earned positive reviews with the prevailing thoughts that the club snagged at least two future NHLer’s in this draft. There were some mixed reviews on the other five choices, but since the entry draft is a crapshoot, for the most part, the club did well.

In The Athletic, Scott Wheeler broke down his praise, or lack thereof, into four categories; Winners, Overtime Winners, Overtime Losers, and Losers. After Round One Friday eve, the WILD was #2 in the Winner group. After Rounds 2-7, their rank for the day was 20th in the Overtime Loser group. They received an overall grade of ‘B’ though, post-draft in the same publication. Time will tell how this draft went, and I’m unaware of the team’s plans to sign any of these prospects at this point.

IN THE EXPANSION draft, the team did lose D-man Carson Soucy to the Seattle Kraken. That was a disappointing loss to me. Soucy took some questionable penalties and still had some nuances of the game to learn, but his development was right on track as far as I was concerned. I had him as a second pairing player within a couple of seasons. This event and the buyout of Ryan Suter left a big gap on the team’s D corps. It places some emphasis on an Ian Cole re-signing and a free agent acquisition or two. PEACE