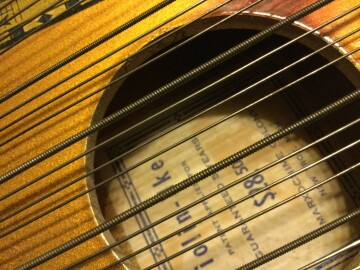 Like most guitar players I know, I always have a few extra instruments around. Some are old, but not all of them are odd. My Gibson Southern Jumbo dates back to 1960, about the time they discontinued making them. The next year, they came out with the “Hummingbird” and the “Dove.” That’s still the guitar I’d be mostly playing now. My acoustic-electric Ovation 1985 Collector’s Series (#68) that I played in the band is still here. My “F” style mandolin is also out and ready to play.

I own a very expensive Deering Deluxe 5-string banjo, which my son claims to have put an additional $2000 into since he now has it, and I guess means to keep it. I once had learned how to play a little on it, but then we bought a new house for me to work on, and I forgot what I knew. The guy who sold it to me from the Homestead Pickin’ Parlor in Minneapolis assured me that I might be able to find a better looking banjo, but I wouldn’t find one that sounded any better. The tone ring was made from pre-war Bell Bronze, which is considered the ultimate in tone for a banjo.

Sitting in my bedroom untuned is my 12-string Ibanez. I used to play it a lot when I was younger and had the patience for tuning. It probably required tuning after every song—it’s hard to remember after all these years.

The Casio DG-20 Digital Guitar with 20 tones from Acoustic Guitar to Trumpet and Clarinet and six built-in rhythyms needs no tuning, because it can transpose at the push of a button. It is also very heavy to carry around, and is capable of doing much more than I have ever asked of it.

The Lyon guitar with the built-in electronic tuners is in its case with a broken neck. A friend offered to fix it, but I have hesitated to take on the extra expense.

In my basement, I have an “A” style mandolin hanging on the wall which may be playable, but I prefer my “F” style. Next to it is a Brunson square neck guitar. The square neck is strictly for playing with raised strings like a Dobro. Also playable, but I already have an old Silvertone hollow body acoustic electric guitar with double humbucker pickups to be used for that. That guitar has excellent tone.

The third thing hanging is a Harmony tenor guitar (four strings). I have known people who played tenor guitar really well, but I learned on a six-string, so I never had the inclination to switch.
Next to guitars, the most numerous instruments I own are the violins. I don’t play the violin, and I don’t know why my wife kept buying them for me. It may have been because her father played the violin, so she always thought that I might pick it up. I didn’t.

Three of the violins are basically of the standard variety. One is purple, and the other two brown, but they all have the usual friction tuners. The fourth has geared tuners like you find on guitars.

Violins were not all she bought, of course. Any instrument she came across at a rummage sale she would buy and bring home. She was an excellent and shameless haggler, which is why I was banned from coming along. (I got too embarrassed.) She once brought me a dusty guitar that had obviously spent years in a closet. For $10 you can hardly go wrong, but when we dusted it off, we found a shiny Fender acoustic. Once she also brought me an accordion complete with carrying case. I tried a little on it, but I knew too many accordion players, and they had spent years learning the instrument, and I didn’t have that much time to invest.

The first violin she bought came with a broken neck, so she got it very cheap. A lady from Virginia fixed it, and told her that she could probably get a violin of equal value for about $300, but that she should keep it because of its unique lion’s head headstock.

I discovered the history of that instrument quite by accident. Peter Ostroushko, a multi-instrumentalist from Northeast Minneapolis (who sadly passed away in Feb, 2021) played for many years on Garrison Keillor’s “Prairie Home Companion.” He wrote an article for “Frets” magazine in which he described it as one he owned. The violins were made in Germany, and were given out as prizes by the Pilsbury Company in the 1920s. 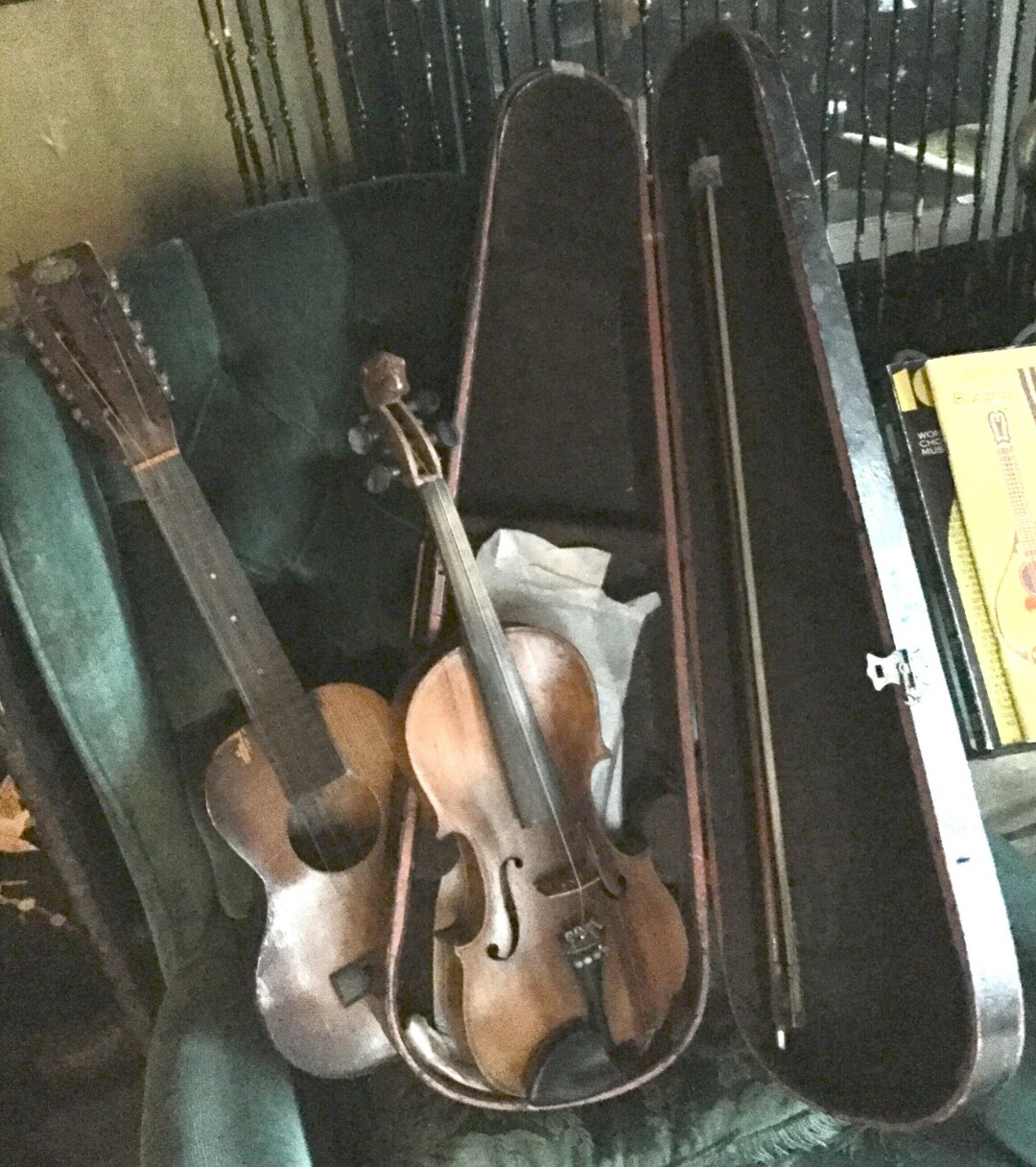 The next instrument I got was a tiple. I knew it was a tiple because it came with a partial set of Black Diamond strings for a tiple, strings 4 through 10. This was the early ‘90s, and the internet had no clue. I contacted a woman who specialized in playing South American music, but other than recognizing it as a tiple, she could offer nothing more on it. This tiple has 10 strings arranged in courses of 2, 3,3 and 2, but I had no idea how it was tuned.

Twenty years later, and the internet has everything you ever wanted to know about tiples. It is the national instrument of Columbia, and it can come as a 10 string or 12 string. The 12 string instrument has four courses of three strings. There are two different tunings, the South American and the North American. The North American is the same as a ukulele. It was an important product of the Martin family of instruments in the 1920s. Mine was made by Regal, a Chicago Company.

I had no trouble finding a set of tiple strings from the Custom Shop. I plan on possibly installing them some day.

The Violin-Uke I recognized as a wall hanging right away, even though it came with playing instructions. A similar instrument was sold under a variety of names such as Ukelin, and a variety of people laid claim to its invention. 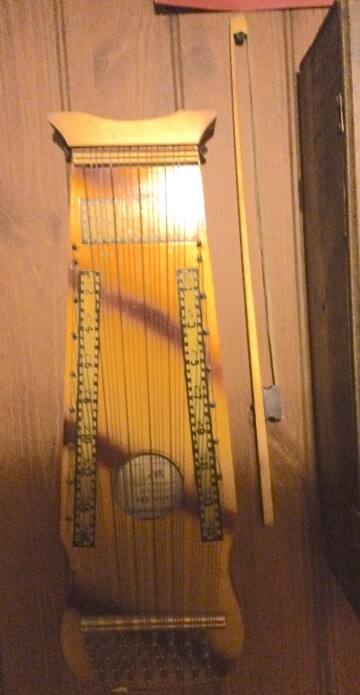 This instrument is specifically mentioned as one made by violinist Henry Charles Marx for his company Marxochime Colony, and is thought to be the first company to manufacture these instruments. They were sold door-to-door by traveling salesmen, who bought the instrument from the manufacturer, and sold them at inflated prices to poor rural families. This particular instrument has $28.50 stamped in the sound hole, so it obviously had a different history.

The instrument proved very difficult to play, and many of them were returned to the manufacturer. It is also a diatonic instrument, which means it cannot be made to play chromatic scales and many common tunes.

I am not sure if the last two were actually meant to be played, or if they are just artistic representations of African instruments.

One has a shallow skin drum head on one end, and a split ended neck with two facing gazelle heads on the other. There is a hole part way down the neck, which suggests there is a piece missing. I can’t guess what that part might look like.

The second looks more like an instrument. It has two strings which can be tuned by violin style friction tuners, a bow, and a sound box.

I could find nothing in African musical instruments that resemble either of these items. 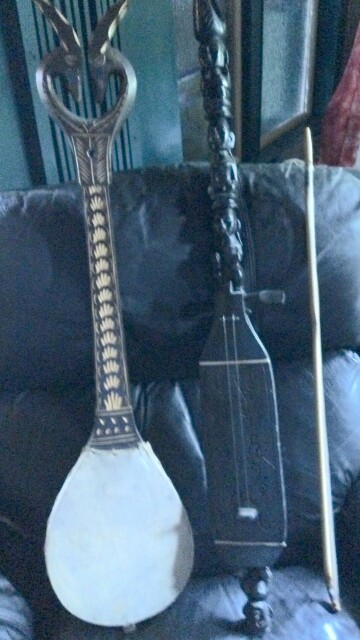