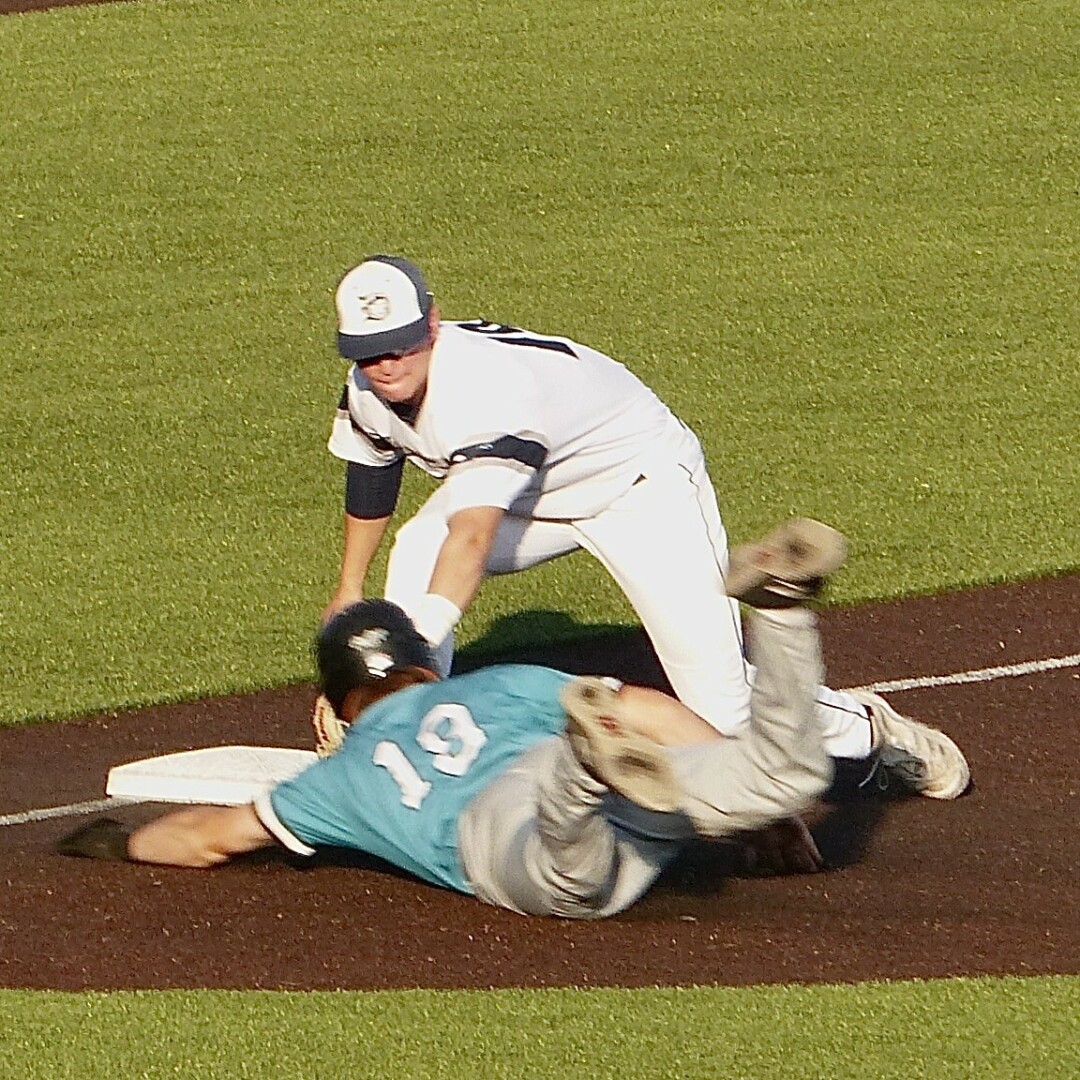 Third baseman Mike Boeve applied the tag,at Wade Stadium and headed to Mankato with a .326 batting average for the all-star game.

With a week to go in July, a week past the Major League Baseball All-Star game, barely two weeks since the Minnesota Wild unloaded franchise stars Zach Parise and Ryan Suter, and almost finished with the NBA playoffs, isn’t it about time for high school hockey? This weekend is the culmination of allowed summer hockey training camps for high school teams, and of course this summer’s sessions are of heightened interest because of the turmoil surrounding the elimination of Duluth East coach Mike Randolph, who is departing after guiding 19 of his 32 teams to state tournaments, over a 36-year coaching career.

In his place will be Steve Pitoscia, who once played for Randolph at East, and who has coached in the youth program for 17 of his 30 years in the sport.

Pitoscia has never coached a single high school hockey game, but that is all about to change this weekend, when he takes his first Greyhounds team to Bloomington Ice Garden, where they will be one of 20 high schools playing in the Minnesota Hockey Summerfest tournament.

East will take on Eastview at 4:45 pm in Rink 2 on Friday in its opener, then faces Centennial at 11 am Saturday in Rink 1, coming back to play Totino Grace at 4:15 pm in Rink 2. There are five pools of four teams each, and after playing three games within each group, the pool winners advance to play for the championship, which will be determined Sunday at 1:45 pm.

Among favorites in the other pools are Andover, Maple Grove, Gentry, Centennial, St. Thomas Academy, Wayzata, Blake, Prior Lake, Lakeville South and North, and Cloquet-Esko-Carlton.

Meanwhile, closer to the Twin Ports, the annual Lakeview Summer Classic at Mars Lakeview Arena will put some of the other new and revised teams on display, including Hermantown and Marshall.

Hermantown is poised to be one of the state’s top attractions, despite still playing in Class A. The Hawks have numerous reasons for optimism this year, not the least of which is the disappointment of missing last year’s state tournament when an outbreak of CO?VID-19 knocked out almost the whole varsity for the first state tournament game.

Instead, coach Pat Andrews summoned his junior varsity, plus star sophomore Zam Plante, who joined the makeshift team and made a run at the state anyway. It didn’t work, but it provides extra incentive this season.

And if one star Plante brother isn’t enough, the Hawks this year will have two of them, as Max Plante – the second of three sons of former Cloquet, UMD and NHK star Derek Plante – steps up from Bantams to join brother Zam Plante and the rest of the talented and deep Hermantown lineup.

Also, when Randolph was forced to resign at East, several young Greyhounds prospects decided to transfer. That includes Dane Calaway, an often-sensational ninth-grade goaltender whose family moved to Hermantown almost immediately. Kaden Nelson, East’s top returning scorer, has transferred to Grand Rapids, and reports are that about a half-dozen of East’s top Bantams have transferred to Marshall.

But the move of Calaway could make a significant impact, as the Hawks gain a luxury of riches.
“He gave us fits last season,” said Hermantown coach Pat Andrews. “We’ve now got four really good goaltenders, because we’re also adding one coming up from Bantams.”

Andrews said he intends to play all four this weekend at Mars Lakeview. Marshall may get a significant boost in its depth from the transferring Bantams, and the Hilltoppers open the tournament against Hutchinson Friday night.

The Hawks open with Benilde-St. Margaret’s Saturday at 11:45 am, while Cretin-Derham Hall faces Mahtomedi in the other game in Hermantown’s bracket.

“We knew we’d be in the loaded bracket,” said Andrews, “and that’s what we want, so we can play a couple of tough games right away.”

Zam Plante, who led Hermantown’s talent-rich Hawks in scoring as a sophomore last season, will only get a brief taste this weekend before he leaves for New Jersey to play on the U.S. 17-and-under team in the Ivan Hlinka international tournament.

“He leaves Monday for that tournament, which is a big event for all the NHL scouts who will get a preview of what to expect in the 18-year-old competition for drafts next year.”

Zam anod Max have played together before, although Andrews said he isn’t sure how he will deploy the two to open this season. He can be patient, though, because Victor Plante, the third brother, is an eighth-grader, moving up into Bantams this coming season.

The other major news in hockey this past week, of course, has been the further demolishing of the Wild nucleus by general manager Bill Guerin. Zach Parise and Ryan Suter, heroes when they signed matching 13-year contracts to take over leadership of the franchise, were both told they were being bought out by the Wild right now, after nine seasons of their 13-year terms.

Parise’s playing time was diminished last season by the Wild, who seemed to be angling to get him to eliminate his no-trade clause, and he also was benched for the first three playoff games, before being put into the lineup and jumping at the chance to be one of the Wild’s best forwards, including scoring a big goal in a victory over the Vegas Golden Knights.

Suter, meanwhile, never seemed to slow a step and was a pivotal part of the Wild defense. By eliminating Suter, and leaving giant former UMD defenseman Carson Soucy unmprotected from Seattle in the expansion draft on Wednesday, suddenly throws the Wild defense into an immediate transition to a smaller, lighter, less-physical group. The Dumba-Spurgeon-Brodin trio that were protected are all wonderfully skilled and great puck-movers, but they all played their best when paired with either Suter, the rugged veteran, or Soucy, the team leader in plus-minus and a steadily improving puck-mover and physics presence in front.

The impressive challenge Max Verstappen and his Red Bull Honda race car has given to defending Formula 1 champion Lewis Hamilton has stirred new interest in the best road-racing in the world, and the series is closer than ever now after the first-lap incident at the British Grand Prix at Silverstone last Sunday.

Hamilton had won the pole on his home track, but No. 2 qualifier Verstappen got the jump on him at the start and held the lead through the first turn. As the cars chased wildly around on the first lap, Hamilton tried several times to sneak past, but could never quite pull it off.

For some reason, Hamilton seemed to think he needed the immediate lead to have a chance to winning against Max, so on one shallow corner, Hamilton pulled up on the right, inside Verstappen, but Max had the momentum to retake the racing line through the apex of the right-hand corner.

Verstappen eased back ahead just slightly, and when he started to cut in for the apex, he left room for Hamilton’s car, but apparently assumed Hamilton would back off just a bit. He didn’t, and by holding his ground, he had no choice but to smack his left front wheel into Vertappen’s right rear, sending Verstappen – the series point leader and winner of three F1 races – spinning off into the gravel on the left an slamming into the outer wall.

Hamilton held second while Charles Leclerc maneuvered his Ferrari into the lead.

The stewards had a long review of the incident, then declared that Hamilton would incur a 10-second penalty, which could be served before his crew started working to change tires on his only pit stop.
Still, I figured, since Hamilton was on his home track, in a car fast enough to have won the pole, he could obviously spend the rest of the race making up the time discrepancy and win the race.

He did exactly that, moving up closer and closer and finally passing Leclerc with just over a lap to go. It was a very exciting finish, but in the face of a steady barrage of superlatives from the very British announcers about the British winner on the British track, I had to agree with one observer who said that on the Silverstone track, every veteran driver knows you can’t pull off such a line-blocking maneuver on that particular turn, so the entire incident was 100 percent the fault of Lewis Hamilton.

However, it was very disturbing to read that dozens of hostile race fans assailed Hamilton with insults, leading to the Mercedes team issuing a statement decrying what seemed to be racist overtones for Hamilton, who is black.

That should never happen, and despite Hamilton’s almost constant winning over the past five years, I had grown to be impressed with his graciousness under fire. To me, it doesn’t matter what color a driver is, but he shouldn’t make a high-risk/low-reward gamble on a dangerous part of a track that could have endangered the life of one of auto racing’s most engaging young drivers.

Just when the Duluth Huskies seemed ready to hold their second-half momentum and cling to the division lead in the Northwoods League, they tripped over a bunch of MoonDogs,. Mankato Moondogs, to be exact. Mankato got a bases-loaded single by Evan Barkey to score a run in the seventh and beat the Huskies 1-0 Sunday to close to within a game of first place as the teams broke for the all-star game.

The MoonDogs did the same thing Saturday, rallying for a 6-3 victory by rallying for four runs in the sixth inning.

The Huskies nevertheless send second baseman.outfielder Ambren Voitik and third baseman Mike Boeve as representatives to the game, and pitchers Will McEntire and Eli Sundquist were also designated.