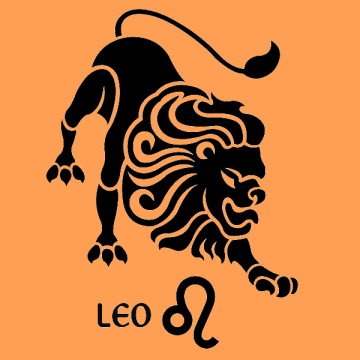 Duality: Masculine
Element: Fire
Ruling Planet: Sun
Symbol: The Lion
Key Phrase: “You had it coming.”
Part of body ruled by Leo: Back, Spine, and heart.
Lucky day: Sunday
Lucky numbers: 8 and 9
Birthstone: Ruby and Amber
Special colors: Gold and Orange
Flowers: Sunflower and Marigold
Metal: Gold
Animals ruled by Leo: All felines
Danger: Leos tend to be bombastic and challenging, and often provoke others into impulsive violence. They are also prone toward being victims of slander and vicious gossip.
Leo the Lion is the fifth sign of the zodiac, and as such rules the House of Creativity and Sex. Just look at any Astrology book, and they will tell you that Leos are proud, self-assured, and exuberant fun lovers, who are by their very nature…loyal, generous, and elegant. Guess what? A Leo Astrologer probably wrote those books. If you want my opinion, and Truth be known, the Lions are attention-grabbing, overbearing ego-maniacs…whose childish, self-centered behavior is exceeded only by their obnoxious attempts to boss around everyone else.

Their loyalty is beyond question. They are devoted to themselves. All Leos possess a Kingdom. The Kingdom may be big or small…it may be their home, or a lover, or a piece of creative work, or their whole career…but whatever it is, Leos are unquestioningly ruler of this Kingdom. A surprising number of tyrants have been born under this Ruling sign. I give you Napoleon Bonaparte, Fidel Castro, Benito Mussolini, and Dustin Hoffman (just sayin’) word is…he’s a GIGANTIC prick on the set. Their constant need for attention often negates their playful, happy nature, and when they lose contact with that part of themselves, they become selfish tyrants roaring through life creating misery… and being born with the instant gratification gene overshadows ANY ability to understand the value of nurturing an idea or a relationship. Argue with a Leo, and they’ll roar with indignant fury. Win your argument, and the Lion will silently stare at you, then retreat into the shadows to plan its next attack.

This is a Fire sign, and thus is concerned with the discovery and fulfillment of future possibilities. Leo’s idealistic nature is always striving to develop confidence in itself, to express its true nature, and allow its inner light to shine. Leos possess a strong creative and artistic streak; they have style and charisma, and tend to live larger than life. Cecil B. DeMille, the great filmmaker of early Hollywood comes to mind as does the inimitable Amelia Earhart, and of course the indomitable Julia Child (The French Chef)…who wasn’t French. She is quoted as saying, “Just speak very loudly and quickly, and state your position with utter conviction, as the French do, and you’ll have a marvelous time!”

Or the infamous Robert De Niro…a fabulous example of a Leo.
“You talkin’ to me? You talkin’ to me?” (from Taxi Driver)
“Better to be King for a night than schmuck for a lifetime.” (from The King of Comedy)
“There are 3 ways of doing things around here: The right way, the wrong way, and the way that I do it.” (from Casino)
The intensity of emotion felt by those born under this sign when they truly Love is nothing less than red-hot. Their love knows no limits, nor does it desire any. Leos are true romantics, and it’s difficult not to love them, because their generous and warm-hearted nature makes them impossible to resist. Their great popularity ensures that they’re usually surrounded by a host of admirers.

Classic Leo: Mick Jagger.
“Thank you for leaving us alone, but giving us enough attention to boost our egos.”
If you love a Leo man, he may be the quiet kind who wants you to hover over him constantly. Be ready, though, as he will not hesitate to tell you your hair is a mess, your ass is too big, etc…. when you burst into tears, he will be genuinely shocked, because in his mind, he was only trying to give you the benefit of his wise counsel. If you catch him in a playful mood, he’ll be cocky..he’ll wear dark glasses at night, and hit on anything that walks by. And by the time he’s 40, he’ll resemble an aging Fonzie..with his beer gut hanging over his too tight Levi’s.

Leo’s vanity knows no bounds. They are the ones with the Ass tattoos, who don’t hesitate to drop trowel to “show” you their masterpiece….Lucky, lucky you!
“Just put on your resume’ that you work for Martha Stewart. That’s more valuable than all the overtime I could pay you.”
Martha Stewart: Classic Leo.
The Leo woman is more Hussy than Highness. Her motto is, “If you’ve got it, flaunt it. If you don’t, fake it.”
Leoness, Mae West, is a classic example of the archetypical female Lion. West’s outrageous style, and nonstop sexual innuendo were her trademarks. Only a Leo would have the brass to write, produce, and star in a play called “SEX” in 1925! She became infamous for one-liners such as,
“I used to be Snow White, but I drifted.”
“I’m a girl who lost her reputation and never missed it.”
“Between two evils, I always pick the one I never tried before.”
“Save a boyfriend for a rainy day, and another, in case it doesn’t rain.”
Or…
“I have never loved another person the way I love myself.”
She was smart, sly, and way ahead of her time. True to her over-the-top Leonine character, West pushed her luck too long and too hard. At 85, she still wore her hair cascading over her shoulders, although it looked more like a damp mop than a silky mane. Her make-up was garish, and she propped herself up on the arms of sweating body-builders young enough to be her grandkids. West had become a caricature. The hooker with a heart of gold turned into a hag who refused to relinquish the spotlight. Your Leo woman won’t be quite as vain, but will demand lots of attention…she’s as high maintenance as they come.

Leos walk over the Earth signs with no fear. One swipe of their powerful claws stops Taurus in its charging tracks, Virgo instinctively knows to defer to Leo’s regal bearing, and Leos will verbally shake Capricorn by its hairy neck until it’s limp with fear. Leos definitely have a feline taste for seafood, and one glimpse of a gleaming fang sends petulant Pisces diving for cover. Should a cracked Crab shuttle out to bite the Lion’s paw, they will snap it up for a tasty mid-afternoon snack, and sullen Scorpio’s stinger can’t deflate either Leo’s sunny disposition or their ego. The Air signs, Gemini, Aquarius, and Libra simply can’t ruffle the Lion’s fur, no matter now hard they posture and blow. But the Lion Leo and fellow Fire signs, Aries and Sagittarius understand each other on a soul level, and therefore, rarely have serious confrontations.

Quick tips for emergencies:
1. Lions need respect.
2. Usually, their roar is sharper than their claws.
3. Attention and flattery keep your Lion purring.
4. One expensive gift is better than lots of little nothings.
5. Stun them by ignoring their roaring.

Leo is the Divine Child of the zodiac, and for them the world is a wonderfully exciting extension of themselves. The Truth is that their link with the Lion’s Kingship lies in the heroic conflict between Leo’s most noble intentions, and the raw power of its instinctual nature.
GOOD DAYS: July 26, 27, 28, and August 22
DIFFICULT DAYS: August 9, 10, 11
AMOROUS DAYS: August 12
CLARITY OF MIND: July 31

Lady Ocalat is a Professional Astrologist, Reiki Master, Minister, and Tarot Reader. She can be reached at 218-722-2240, or at Lady Ocalat’s Emporium in downtown Duluth. ladyocalat.com