The federal school board 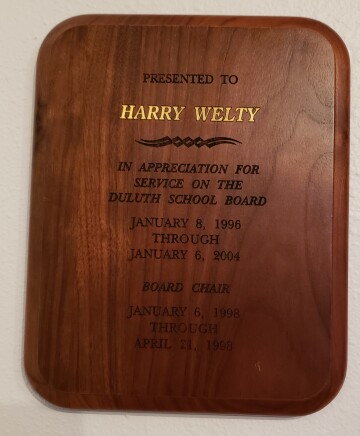 Thirty years ago at a Minnesota School Board Conference I was told that State Legislators all wanted to run the school boards. My lifetime suggests that they weren’t alone.

It is a great tragedy that America, having gathered incredible intellectual firepower to become America, managed to neglect many of its children. In catching up with the U.S., Western Europe, Russia, China and the third world have tried to avoid this mistake. An attempt to rectify this began with Brown vs. Board of Education of Topeka. I was there in second grade when Brown bore fruit. Sadly, Topeka was a happy exception.

My teaching career began shortly after Richard Nixon’s helicopter trip into disgrace. Ford was President when my bathroom stall was kicked open. The Vietnam War Era left some of my high school students reeking of marijuana during Jimmy Carter’s single term of office. Republicans loved blaming Carter for the failures of public schools, especially after his administration created the Department of Education in 1979.

Ronald Reagan campaigned against this additional unnecessary government but after his election he didn’t get rid of it.

In 1983, a national report called A Nation at Risk said America’s schools were failing too many children. Reagan used the occasion to point an accusing finger at schools. They were a natural target.

Republicans had always been at odds with unions but this animosity accelerated when deep pocketed teachers’ unions aligned themselves with the pro-choice lobby. It had been liberal pro-choice Republicans on the Supreme Court that handed down Roe V Wade.

Southern Democrats, now firmly in the Republican fold had a controversy that rivaled their Civil War boogeyman Abolition. They would lead a 35-year march to insure a Pro-life Republican Supreme Court
I was on the wrong side of abortion as a pro-choice Republican clinging to the illusion that Reagan’s call for a Republican “Big Tent” might leave room for me.

I cheered the unusual alliance between President Reagan and Al Shanker, President of the American Federation of Teachers. Shanker had been a ferocious union man, and I didn’t like him in my college days after an ugly teachers’ strike that he led in New York City. But Shanker took A Nation at Risk seriously. In his later years, Shanker became a apostle for building flexibility into schools. He agreed that too many kids were being left behind.

Reagan had once been the devil who alleged that a black con woman who grifted millions of welfare dollars was the Democratic Party’s poster girl. But now, these two men championed charters together, little realizing how differently their successors would approach the subject.

I too was eager for more flexible schools and Al Shanker rose in my estimation. No longer a union goon Al was now a prophet.

I was teaching in Morgan Park when Shanker paid a call on Duluth’s teachers. I was deeply chagrined to be unable to attend his speech. Shanker had a threadbare audience that night, which embarrassed Frank Wanner, President of the Local. He scolded his membership for not showing up in a sour editorial in the union newsletter. Administrators called it the “Yellow Rag.”

Reagan retired as a Republican saint but harder core Reaganites folded up his “Big Tent” after Alzheimer’s took hold of him. His successors didn’t trust his moderate Vice President George HW Bush who succeeded him in the Oval Office.

After a brief moment of wild popularity and a quickie war Bush lost a three-way 1990 race to Democrat, Bill Clinton. The “triangulating” Clinton borrowed welfare reform, free trade and charter schools from Reagan, to the chagrin of both Democrats and Republicans.

Having lost three elections during the Clinton/GHW Bush years I was finally elected to it in 1994. To my surprise the first decision I would make was whether Duluth would host Minnesota’s and maybe America’s second Charter School.

President Clinton came to celebrate our new charter in Duluth and jogged with our Superintendent of schools Mark Myles. You can read about his visit here: (snowbizz.com/Diogenes/DiogenesPage/SculptingBillClinton.htm).

Notwithstanding the President’s stamp of approval my support of the then “Edison School” would make me the villain of the Duluth Teachers until – well, I think I still am a villain.

My sister who was teaching at the time told me she met some Duluth teachers who told her they hated me after she mentioned that her brother was on the school board. You can read more about the why here at: (snowbizz.com/DuluthSchools%20Page/Voodoo/Voodoo.htm).

Just past my Quarter Century mark in Education there was a significant casualty of the 2002 Senate election – U.S. Senator Paul Wellstone. I was at one of his last meetings in Duluth when he came to talk to the school board. I asked him about federal funding for special education, long a bugaboo for school boards as an unfunded federal mandate.

Wellstone told us mysteriously that he had been meeting with the Republican President and Wellstone was sure there would be a remarkable announcement in the near future from the President on that score.
Then the Senator’s plane went down over the Iron Range a week shy of the election. There were no announcements.

I still have two years of chronology left to complete my first era of education and I haven’t mentioned Outcome-Based Education, Hockey or 9/11.

Maybe I can squeeze them in before making mention of the Red Plan.