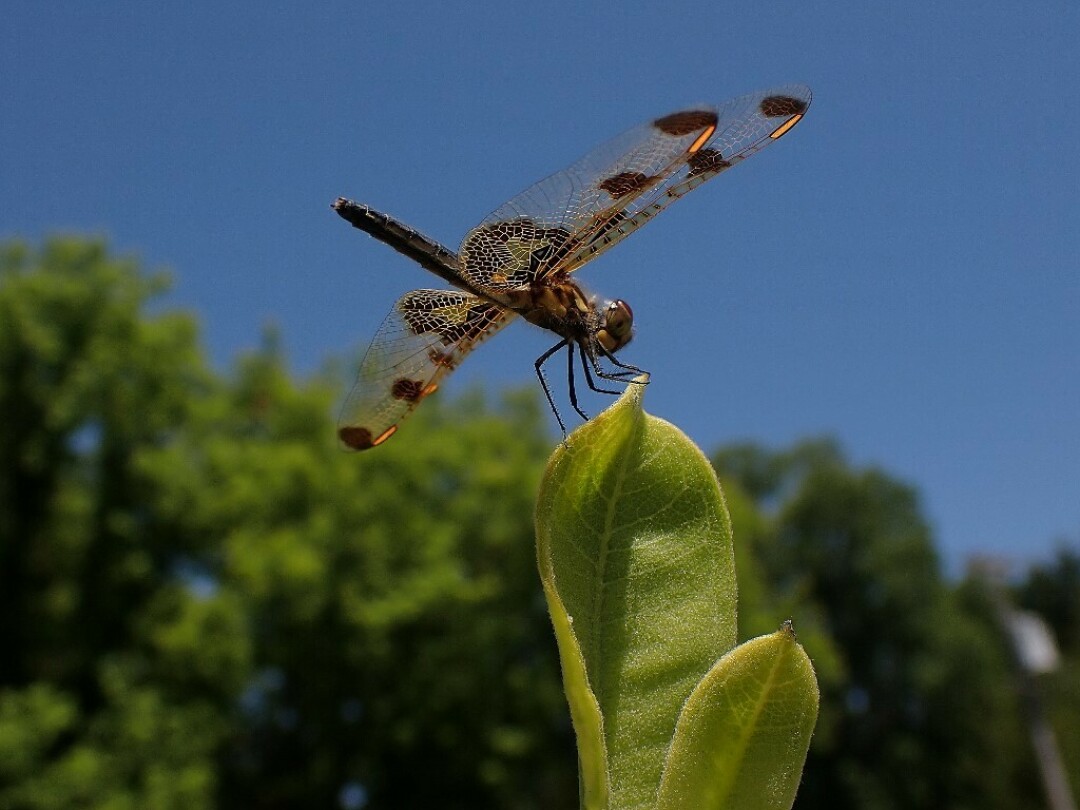 Dragonflies like this female calico pennant are beautiful. They also go through an elaborate process of metamorphosis that is worth pondering more deeply. Photos by Emily Stone.

I bent down, then knelt down, then finally sat down on the sun-warmed grass so that I would be eye-level with the dragonfly. Usually they dart off so quickly that I don’t get a good look, but this female calico pennant clung to the tip of a milkweed leaf even as she was buffeted by an afternoon breeze.

Her enormous eyes were the color of sweet cherries, and light glinted off their curve in just the same way. Golden triangles marched down her ebony abdomen. Dark patches on her hind wings, laced with yellow veins, glowed like stained glass in the sunlight. Truly, she was a work of art.

As I sat mesmerized by the dragonfly’s delicate beauty, thoughts of my to-do list melted away. Instead, a memory surfaced from an essay written by one of my students last semester when I was adjunct teaching. “Whenever I feel distance from myself or want to give up,” she wrote, “the most beautiful creature appears.” Anahi, a student at Northland College whose parents are from Mexico, had been writing about a frustrating time in her life, and how encounters in nature have a way of easing sadness and stress.

Those thoughts resonated with me, but one of her next sentences stopped me short: “We praise dragonflies for their attractiveness, but we never consider the challenges they face for us to see them.”
I saw the truth in her statement immediately. While an adult dragonfly might dart and shimmer for a few weeks of the summer, it can take years for them to get to that point.

“A dragonfly has four stages in their life cycle,” wrote Anahi. “They lay their eggs, form into larva, transition into a molt, and then become an adult.

Seems simple, right? Well, that’s where we’re wrong.” When I first read Anahi’s essay, this sentence felt simple, too. But later, when she told me how young she was when she began translating letters from lawyers, hospital bills, and work instructions for her parents, who were still learning English, I realized that this sentence held a deep wistfulness for dragonflies’ long childhood.

Once dragonfly nymphs hatch from eggs, they may spend anywhere from six months to six years in this youthful stage, before they emerge to become flighted adults. Like tiny dinosaurs, the nymphs roam the bottom of streams, lakes, and ponds, hunting with hydraulically powered jaws for mosquito larvae, minnows, and snails. But even as fierce predators, they risk being eaten by fish and frogs, and being fed to baby loons.

Anahi, too, faced challenges. She watched I.C.E. agents arrive to take away her father. She endured racial slurs, stereotypes, and unkind words and looks. She traveled to Mexico alone to connect with cousins, while her parents remained at home and tried to share the experience vicariously. And, she navigated the college selection and application process largely alone, as the first person in her family to attend college.

Now in Ashland, she often seeks out a bench down by Lake Superior, where she can watch dragonflies and escape for a few minutes from the pressures of her life. She wrote, “Dragonflies have survived for 300 million years because they have strategies to adapt into new environments.” 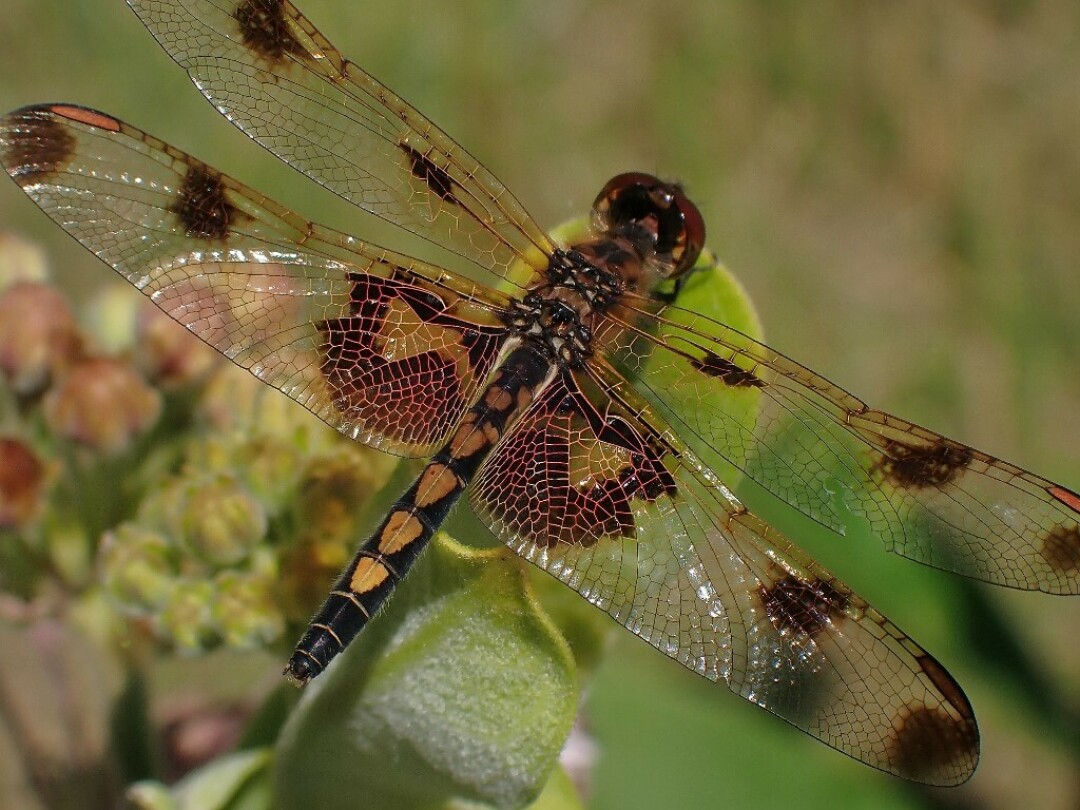 As a biology major, manager for the lacrosse team, and center of a close-knit group of friends she treats like family, Anahi has metamorphosed into an active young adult. Soon she’ll graduate and spread her wings. Which is why, I think, when she wrote a research paper about dragonflies for her entomology class, she saw the similarities, and the metaphors, in their life cycle.

After having read a semester’s worth of heart-felt essays filled with emotion and wisdom, and having sat across from this soft-spoken young woman while she told me about a life both like and unlike my own, I see the world a little differently. And I read her essay a little differently, too.

“Before they’re transformed during last molt in the nymph stage, the dragonfly walks to dry land and sits near the edge of the water,” wrote Anahi. “Once they find a secure spot, away from predators, the thorax begins to slip. The dragonfly begins to ease itself out the nymph exoskeleton. During this step, they also must wait for their legs to gather strength. While they are waiting, the legs and the abdomen start to expand. That process is called emergence.”

“Even if the legs start to gain some strength, they must be careful because they can get tired while waiting, since developing takes time. They end up feeding close to the water or on anything that is close by. Once they are ready, they slowly start moving and flying farther and farther away.”
The calico pennant that had captured my attention finally darted to a perch on the far side of the garden. “Beautiful,” I thought, and also so much more.

This Natural Connections was written in partnership and with approval from Anahi Gill.
Emily M. Stone is Naturalist/Education Director at the Cable Natural History Museum. Her award-winning second book, Natural Connections: Dreaming of an Elfin Skimmer, is now available to purchase at cablemuseum.org/books and at your local independent bookstore, too. For more than 50 years, the Cable Natural History Museum has served to connect you to the Northwoods. The Museum is now open with our exciting Mysteries of the Night exhibit. Connect with us on Facebook, Instagram, YouTube, and cablemuseum.org to see what we are up to.