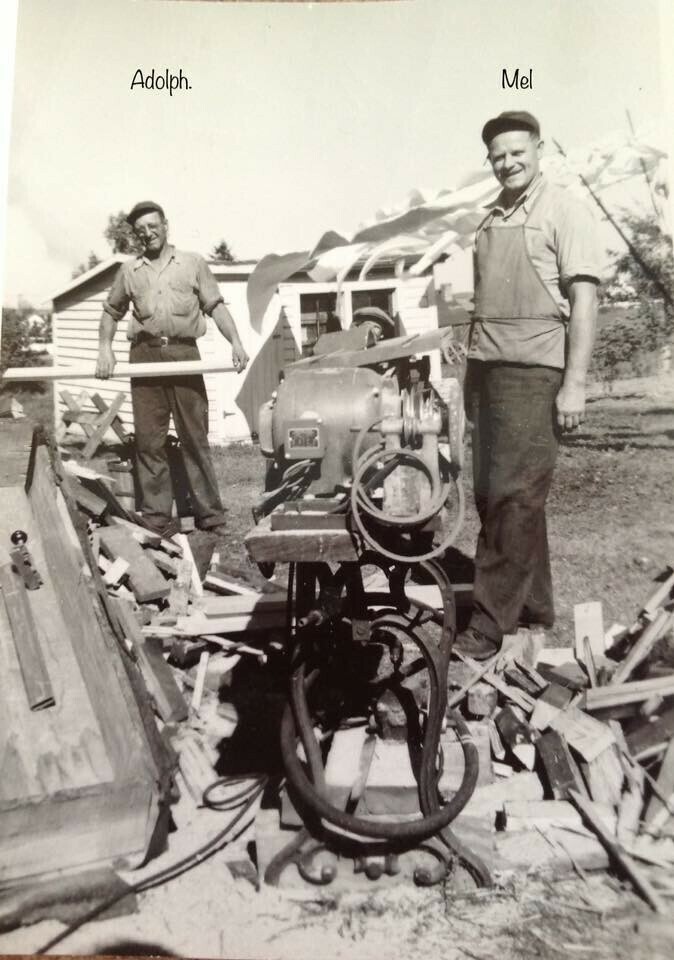 My father Adolph, left, and his brother Mel.

I am writing this on Father’s Day, after I read my sister’s tribute to him on Facebook. He died when she was 12, so I’m going to try to fill in the blanks for her, and you’ll all just have to go along for the ride.

She says he claimed to be a jack of all trades, master of none. I’d say he was master of many trades, but you be the judge.

She remembers the agates and the tumblers going all night long in the basement. He built those tumblers. He made her an agate necklace, he made me a tiepin and an agate belt buckle.

He did love to fish and I loved going with him when we could put a boat in the water. We never visited a bait shop — we netted our own minnows and dug our own worms. I was not as crazy to go ice fishing, but he loved that and spearfishing as well. He made a lot of spearfishing lures, and I still have several of those hanging in my garage.

We netted smelt at Park Point when they were running, coming home with bushel baskets full. He built a smoker in the backyard, where he smoked smelt and suckers.

He never did much hunting — he didn’t own a rifle or shotgun — he just had the .22 bolt action repeater, but he did show me how to make and set a rabbit snare. I never caught any, but he did. I remember eating a couple of those. I don’t think I cared much for the taste, but we ate what we had.

When I was very young, my father put up a swing for me. It was higher than any swing in Pinehurst Park, rising up about 12 feet in the air. I am sure the poles were at least three feet in the ground and anchored in cement, because they were very sturdy. There was only one source for poles like that. My uncle Charlie had a little sawmill, where he cut lumber from “deadheads” that he pulled from the St. Louis River. Deadheads were logs that had sunk when they were floated down the river to supply the old sawmills.

My father helped him sometimes, so I’m sure they were the source of my swing poles.

Connected to the swing was a monkey bar, on which I did somersaults and hung by my heels. My friends and I would swing as high as we could go, and then jump off to see how far we could jump.

There was an old building in our backyard that I suspect was once used to house my grandfather’s cows. The front half was then my father’s workshop, and the back half was usually a chicken coop.

Before landfills, there was the city dump, which was a treasure trove for people like my father. People could go there and pick up other people’s trash if they could use it. The Balsam Wool Company made building insulation from treated wood shavings. Their trucks would dump big loads of rejected materials at the dump, and many Cloquet houses, including ours, were insulated with that material.

There was nothing better than a discarded washing machine. An amazing assortment of gears, belts, pulleys and most of all a burned out motor. My father could restore a burned out motor to health, and his workshop always had a working motor or two to apply to his creations.

I was told that he had built a rotary lawnmower before they came on the market, but when it broke down, he didn’t bother making another one—we had very little lawn to mow.

He had a Rube Goldberg looking device which he used to sharpen circular saws on — I never could figure it out, but it obviously worked, because the neighbors would bring him their saws to sharpen. He also made his own drill press. It wasn’t as sleek as a Craftsman, but it worked just as well.

He was making hunting knives and fillet knives in his shop. I don’t know the source of the colored acetate he used to form the handles with, but he cut them out in rough ovals, and then sanded them down and polished them into beautiful multi-colored handles. At the beginning of the War, he made a machete for a guy he knew was going to the Philippines. That led to requests for more, and he made those, too. They were beautiful, and were equipped with tooled leather sheathes. No charge, of course — it was part of the war effort. I don’t know how many of them were actually used for chopping jungle growth.

When it came time to build our new house, My mother drew up the design of the house she wanted, and my father built it to her specifications.

He shoveled as much as he could out of the basement area, until he had to give up and hire a guy with a team of horses and a scoop to take out the rest of the dirt. He had picked up an old cement mixer and got it going. That mixer was used to mix all the cement that went into the house. I was in my teens then, and was expected to help out. He taught me how to make a batch of cement — so much sand, so much cement and so much water. We could always depend on an uncle or two to show up and man the wheelbarrows.

He leveled the dirt floor, and laid down the drain pipes and any other plumbing that needed to be there. Then the cement mixer went to work, and mixed the cement for the floor. He leveled that, and put up the forms for the basement walls, with cutouts for where the windows would go.

A few years later, Uncle Charlie’s neighbor Mr. Brenny took us into his garage to show us the forms he was using to pour cement blocks. That was the beginnings of the Brenny-Dahl Block Company, which now supplies truckloads of those blocks to the community. But at the time, those blocks were not available.

With the basement poured, he could begin building the framework with the help of the uncles. With the framework up, he could finish the wiring, plumbing and insulation, and then put up the rafters for the roof, and nail up the roofing. The sheathing, the siding, windows and doors went up last.

He did most of the work putting up the interior walls, including the arched doorways and built-in bookcases my mother wanted. In the wall between the living room and kitchen, he hung a large mirror, which rolled up into the wall so dishes could be passed in from the kitchen when we had large gatherings. He only hired a man to do the plastering.

The cement mixer went to work for the front stoop, and sidewalk.

Before the interior walls went up in the basement, he showed me how to use a wood lathe to make a bowling pin. I made one or two, and he did eight, and also carved two wooden bowling balls. We set up our own bowling alley in the long part of the basement.

Our old house, which was behind the new house, was rented out to a couple of people building their houses on Kelly Avenue, which had taken one half my father’s acre, but opened it up so he could sell 2 lots in the back, keeping the front two lots for himself. When the last renter left, that house came down in favor of a garage and breezeway.

Again, the old cement mixer was used to pour the slab for the garage, breezeway and patio that was installed behind them.

Next to the patio he put up three rows of rock, cemented in to form my mother’s rock garden where she would plant flowers.

A few years later when I bought a dilapidated old Ford convertible, he took it into the garage, put a new top on it, tore the engine apart, ground the valves, installed new piston rings and replaced the brakes.

Any one of those jobs would have baffled me.

My father had metal lasts that allowed him to resole shoes and boots. He always cut my hair, and also several of the neighbors. If there was anything he couldn’t do, I never saw what it was.