Revisiting a classic from Eno & Cale 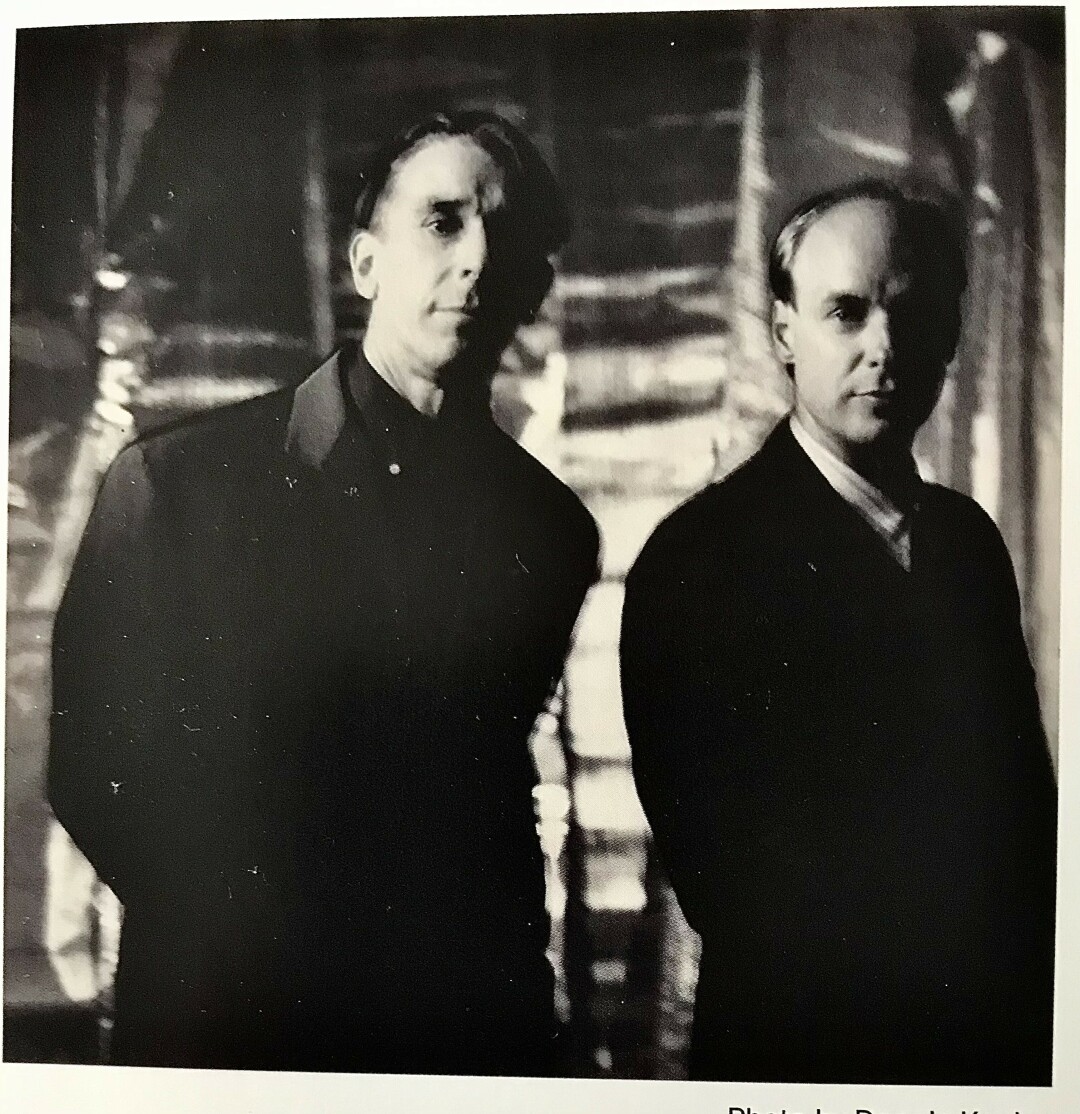 John Cale and Brian Eno in a 1990 publicity shot for Wrong Way Up.

It’s hard to believe it has been 30 years since the release of Wrong Way Up by Brian Eno and John Cale. Seems like yesterday when I first heard this great CD released in 1990, and now re-released on vinyl to celebrate its 30th anniversary.
The subsequent download that comes with the record includes two unreleased tunes. More on them later.
The 30th anniversary release includes excellent liner notes, courtesy of a letter Eno sent out to journalists upon the release of Wrong Way Up – his first record of “songs” after a dozen years steeped in the world of ambient soundscapes. He sent this letter just to anticipate the repeated questions they would ask him about leaving ambient behind for this project. The notes also include part of an illuminating German interview with Eno about the record.

Eno came to fame as keyboardist in Roxy Music before branching off on his own in the world of ambient music. Cale played viola and bass in the Velvet Underground before going solo.
Eno and Cale had worked together on and off since 1974, but this record came about when Cale asked for Eno’s production assistance on an orchestral piece Cale wrote called Words for the Dying. Eno was feeling ready to re-enter the world of song, so asked Cale if he would be interested in co-writing an album of songs (Eno says he didn’t think he could pull off a record of songs by himself).

In his letter to journalists, Eno talks about wanting to set listeners “afloat on a sea of music,” and I immediately say to myself, “yes, that is it exactly. That is always how this album made me feel – floating on a sea of euphoric music.
That is something I usually associate with classical music – DeBussy’s La Mer, for a perfect example.
My first exposure to Wrong Way Up was through an early ‘90s magazine, the name of which I’ve long forgotten. Subscribers got a magazine and a CD compilation of new music. On one of those discs was the Eno song “Spinning Away” from Wrong Way Up. It leads off the second side of the record, and it is a stunningly gorgeous piece of music. It’s got Cale’s lyrical viola and violins by Neil Catchpole, a sparkling rhythm guitar by Robert Ahwai, a funky bass line by Daryl Johnson and an otherworldly rhythm track by Eno (he refers to it as a “rhythm bed”). Exquisite is the word that sums up this song for me. There’s something dazzlingly diamond-like about the way the music cuts to the essence, which, I suppose, can be found in the hypnotic lyrics and Eno’s brilliant delivery. The music accentuates each word.

And, so, I had to have the CD, and found that “Spinning Away” was not a beautiful fluke. Wrong Way Up is a masterpiece, and, finally, a very welcome addition to my vinyl library.
Eno starts things off with “Lay My Love,” a song full of syncopated and hypnotic looping rhythms and an oddly metallic yet euphoric sound.
Eno follows that with his “One Word,” which sounds like he laid down the rhythm track with a whipcord. On this track, Eno is credited with rhythm bed, guitar and “treatments.” Again, there’s a certain euphoric feeling to the sound, which is unusual for Eno because before this he seemed to be exploring the sounds of melancholy, or as he describes it, “autumnal” sounds The guitars are positively bouncy and the words are mysterious. 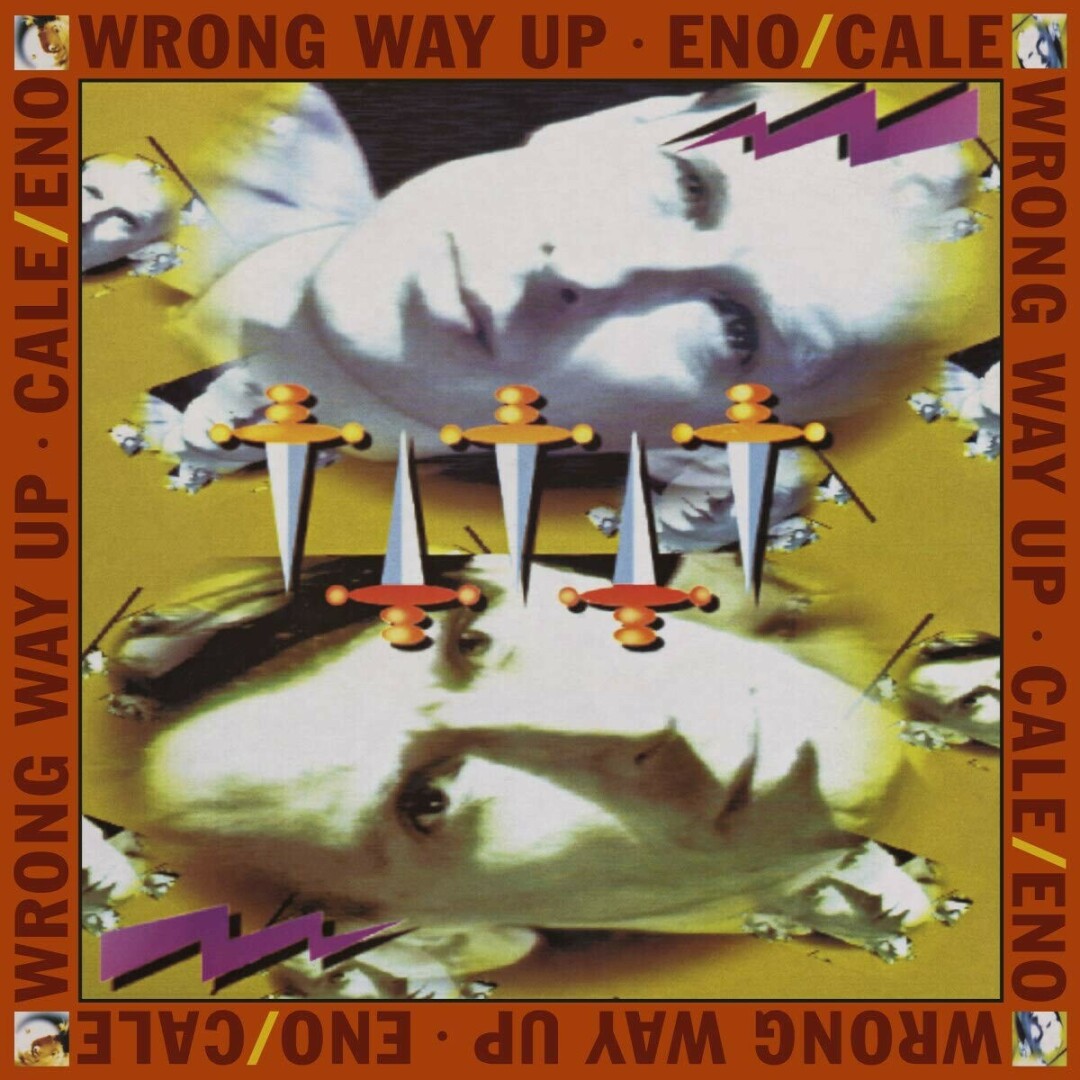 In the liner notes, the German interviewer notes “a very peaceful atmosphere in the music,” which pleases Eno, who explains that not only was he happy to be singing again, but the World Cup was taking place during the making of the record, which Eno describes as a “very emotional time for me,” and he became the father of a daughter, which he explains gave him a new way of looking at life.

The first Cale song comes next, “In the Backroom.” It begins with a darker sound, and delivers darker vocals than Eno’s. He describes his voice as thin and sharp; it’s not, but it’s not as smoky as Cale’s almost-whispery singing/recitation. Lots of bendy guitars and bright strings add wry commentary.

Eno follows with another sonic voyage he calls “Empty Frame,” where Eno provides some great lead and harmony vocals and an all-too-brief rubbery lick on what he refers to as “dark guitar.”
Cale finishes Side 1 with a mini-mystery novel called “Cordoba,” a story built on the short, declarative sentences he had found in a learn-how-to-speak-Spanish text. There is a Hitchockian sense to it, complete with stabbing violas ala Bernard Herrmann.
And then the adventure of Side 2 begins with the beautiful and equally mysterious “Spinning Away.” It somehow reminds me of another classic Brit single, Peter Gabriel’s 1977 “Solsbury Hill,” and not just because they both start on a hill. I find them equally moving pieces of brilliant popcraft.
The CD version of the 30th anniversary of Wrong Way Up has 12 songs, instead of the original 10. The vinyl version has only the original 10, but you get the two extra songs via download. They are “Grandfather’s House” and “Palanquin.” Those songs appeared on the B side of the single release of “Spinning Away.”

“Grandfather’s House” is another strange, haunting Cale song. It starts off with sweetly sentimental music, and then Cale begins emitting apparent non-sequitirs on hsi viola, and the only thing that seems certain is that the singer is accused of theft and his grandfather actually did build a house. In short, it perfectly fits the brief of this beautifully mysterious recording.

“Palanquin” is a piano-dominant instrumental that borders on New Aginess and, frankly, does not fit with the rest of the record, so I am glad they left it off the vinyl. I prefer to go out on Eno’s “The River,” a haunting, loping piece that again puts you directly “afloat on a sea of music.”

On the long, deep river
Where the moorhens cry
As the first sun quivers in the open sky...
Oh, she came down the river
Soon, all the leaves were still
The current was strong and the river was so long
So, we drink to be renewed,