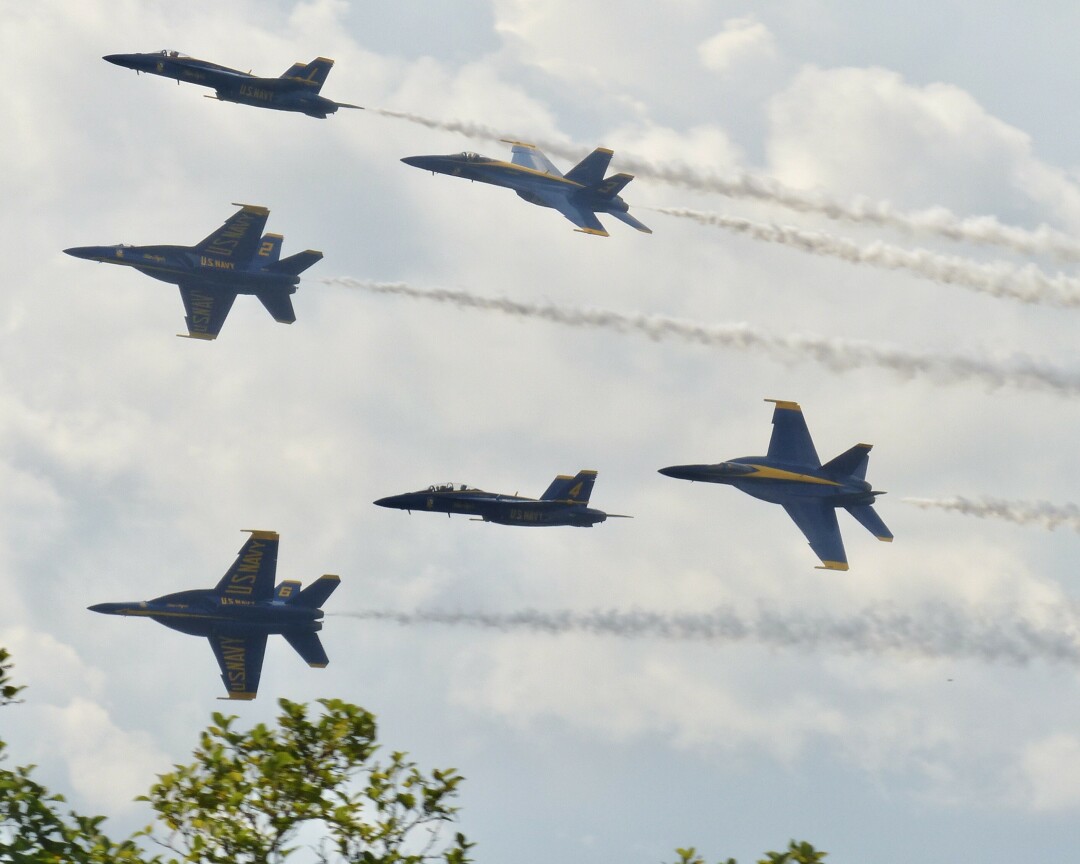 Blue Angels fan out coming from the West. Photos by John Gilbert.

The people who knew Mark Pavelich best know that he was an amazingly kind and generous person, who kept mostly to himself but is fondly remembered by his hockey teammates from days at Eveleth High School, UMD, the 1980 U.S. Olympic team, and the New York Rangers.

The also are determined to make sure that Pavelich is remembered for the great player he was and the good person who was inside that 5-foot-8 playmaking dynamo. Pavelich has always been a magical set-up artist whose deft, quick moves could freeze a defender who would then be victimized by a brilliant, almost clairvoyant passing play resulting in an easy goal.

He is more remembered for making the pass in the third period of the 1980 Winter Olympics in Lake Placid that resulted in Mike Eruzione’s game-winning goal against the heavily favored Soviet Union. But Pavelich’s goals and set-ups also sparked nearly all the winning rallies for Team USA’s undefeated run through the Olympic tournament. Before that, Pavelich was a scoring star at UMD, who tormented Brooks’s Minnesota Gophers on their way to the 1979 NCAA championship.

After the Olympics, the 5-foot-8 Pavelich was not widely sought by NHL teams until Brooks got the job coaching the Rangers. He quickly acquired Pavelich, who worked his magic in Madison Square Garden, scoring 99 goals in three years. When Brooks and the Rangers parted ways, Ted Sator took over as coach and enforced rules demanding all players dump the puck into the offensive zone, instead of the slick playmaking Pavelich preferred. So he quit the NHL and came home to build a home on the North Shore where he could hunt and fish in seclusion.

The shock hasn’t worn off for his family and close friends since his death at age 63 was ruled a suicide, at his residence in a mental health treatment center in March. But those closest to Pavelich are taking major steps to assure that Pavelich’s memory will be a positive one.

A golf fund-raiser is scheduled for Monday, August 16 at Giant’s Ridge in Biwabik, and it should be a major attraction that draws NHL players and coaches, college coaches and former players, and dignitaries from throughout the hockey world to participate in “The Ranch, Teammates for Life” tournament, which will help establish a center for former athletes who are trying to recover from debilitating mental illness.

Many believe that Pavelich was struggling with CTE — chronic traumatic encephalopathy — which can be caused by repeated blows to the head in sports like hockey and football. Pavelich was said to be greatly improved and enjoying life, and making great strides since moving to the Eagles Nest Healing Center in Sauk Centre, just north of St. Cloud, Minnesota. That facility is primarily for military veterans, who pretty much adopted Pavelich when he was allowed to transfer there for more appropriate treatment.

Former Rangers star Barry Beck, who became close to Pavelich when he played there under Olympic coach Herb Brooks, and T.J. Gorence, as well as Pavelich, had been working toward creating a facility especially for former athletes to recover in a positive situation. Now that plan has been accelerated, and the proposed facility will be named “The Ranch, Teammates for Life,” and will be near Eagles Nest Healing Center, which has donated the land, and a building for the facility’s use.

The ribbon cutting will be in Sauk Centre on Saturday, August 14, followed by the golf tournament on Monday, the 16th. There are still openings, for foursomes and individuals, although 20 of the maximum 36 foursomes already have been filled, according to Guy LeBlanc of Hermantown, who is helping coordinate the function.

To preregister, golfers or backers of Mark Pavelich’s memory, can check the website theranchteammatesforlife.golfreg.com and get information.

“A number of NHL coaches and players, all six Division I college programs in Minnesota, and many other well-known hockey people are coming to support this,” said LeBlanc. “A lot of athletes have suffered injuries that have led to mental health problems, and we hope to eliminate the stigma and create an atmosphere where they can fully recover.

“Brian Burke, who has been a general manager in the NHL, has dominated the $1,500 sponsoring fee to allow four veterans to participate in the golf tournament, for example. Everyone has been so supportive that we think it will become a major event to help this cause.”

It has been a tough time for sports fans in the Duluth area. In the past two weeks, former UMD basketball star Roger Hanson died after a two-year struggle with cancer. sBarely a week later, former UMD All-American defenseman and Hobey Baker winner Tom Kurvers also died, after trying to fight lung cancer. Kurvers was an assistant general manager with the Minnesota Wild, and frequently came to Duluth to scout his alma mater in NCHC games.

During the same time span, word came that John Nachtsheim had died, at age 81. Nachtsheim was a star athlete at Robbinsdale, and got a football scholarship from Colorado, but he transferred back to Minnesota and attended UMD where he joined such luminaries as Dick Pesonen, Ed Lundstrom, Ron Kosteliz and other Builldog hall of famers on one of Jim Malosky’s greatest teams.

Nachtsheim was a speedy, slashing runner who could squeeze through a tiny opening in the line and break away for long gains or touchdowns.

And on Monday of this week, Brendan Flaherty died after battling throat cancer that caused him to leave the hockey coaching job at Marshall, which he had developed into a state power. Flaherty had a somewhat loose, reckless style with the Hilltoppers, but he suddenly changed his philosophy and tightened up the team’s discipline to advance to consistent stature as a Class A power. After several dominant seasons, Flaherty led the Hilltoppers to move up to Class AA and become a challenger for the large schools.

Flaherty, from a prominent sports family in the Duluth area, had previously coached hockey at Duluth Central before the breakup of the Duluth school system, but found a home as manager of Mars-Lakeview Arena on the Marshall campus and coach whose name became synonymous with the Hilltoppers.

The Blue Angels put on their usual spectacular air show at the Duluth International Airport Saturday and Sunday, along with a strong group of supporting features. One of the highlights of the show was the first appearance of the F-18 Super Hornets, the advanced Navy fighting aircraft that replaces the aging but impressive F-16 in the military arsenal.

The F-18s are faster and more maneuverable, and put on a spectacular precision maneuverability exhibition with six planes coordinating many of the drills, or a group of four, which allowed the other two to circle around and surprise the huge crowd with low-level, and loud, speed runs over the main airstrip. The seventh F-18 is a two-place plane, in which pilots could take dignitaries for rides over Duluth at incredible speeds.

The crowd Saturday was reported to be the largest in the history of the Duluth air show, proving that it might not be a sports event, but it is a spectacular attraction. 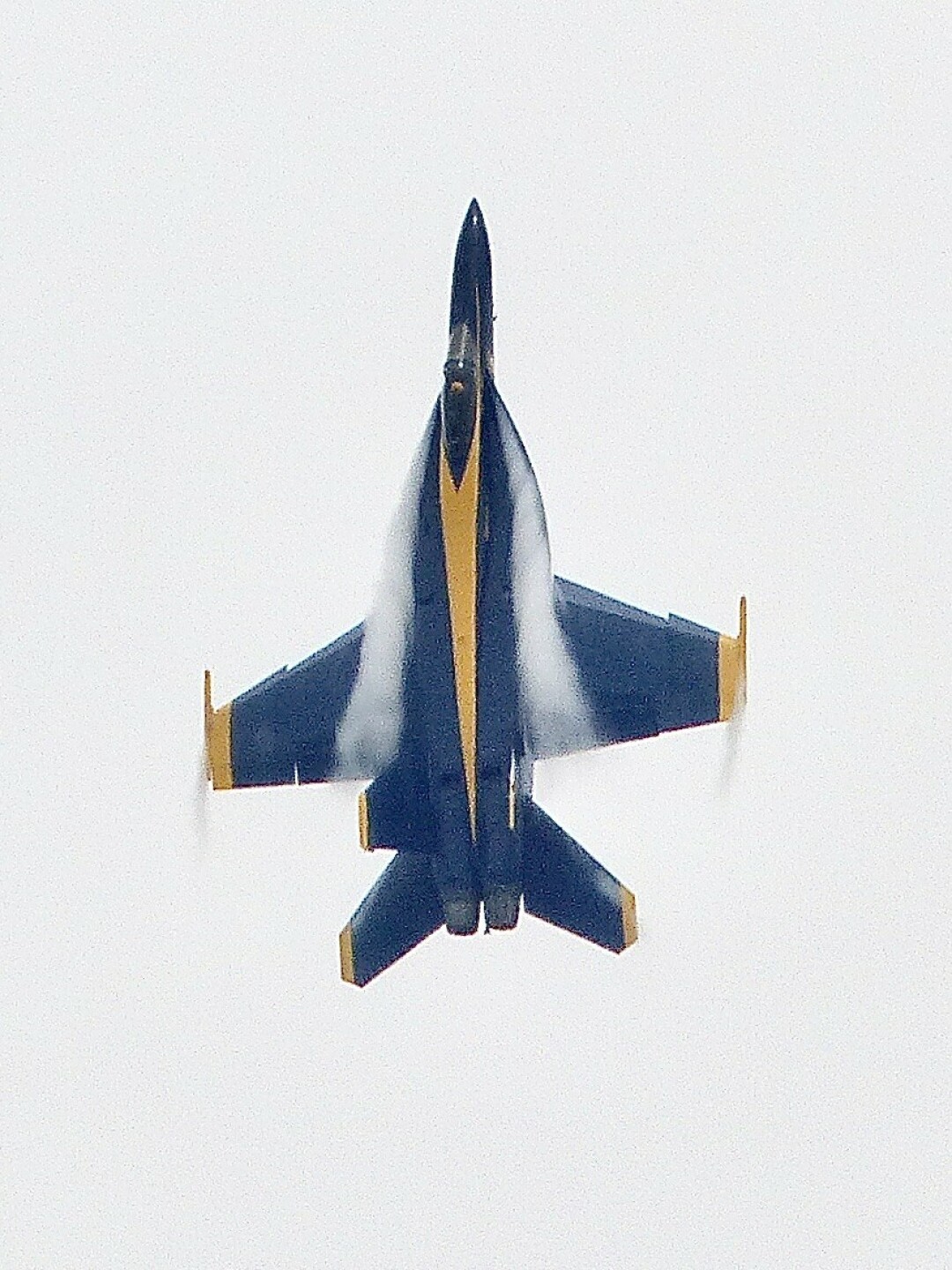