Al Capp and the Dogpatch economy 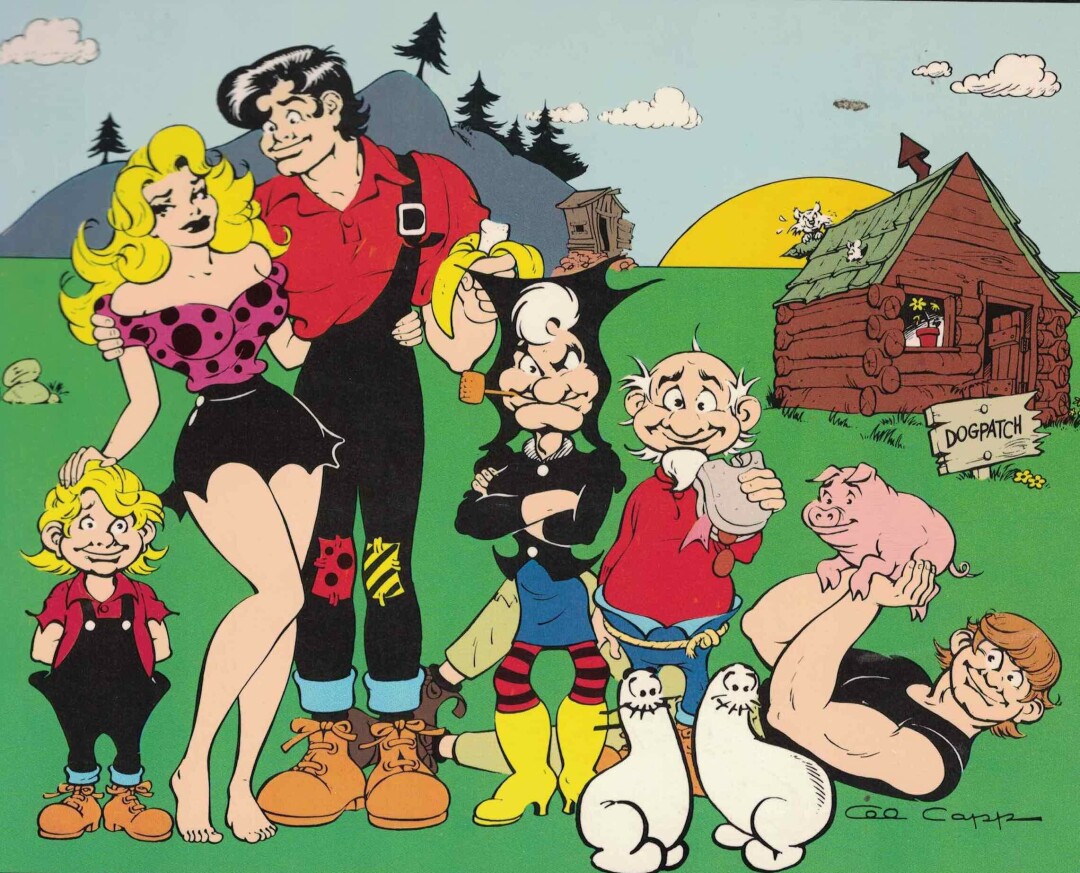 The land in Dogpatch would only grow turnips, and every year the Turnip Termites would eat all the turnip blossoms. Hilariously starving people.

In the Introduction to “The Best of Li’l Abner,” Al Capp writes a short autobiography, where he says that his family was poorer than any family today because they didn’t have welfare or food stamps. And — check both boxes — neither did my family.

Al Capp was about the same age as my father. His mother, he says, attended normal school but never taught, and his father went to Yale Law School but never graduated. Let’s see ... His mother attended a Teacher’s College, an institution which taught high school graduates to be teachers at a time when a high school diploma was a great accomplishment. His father attended Yale Law School, which is, if I understand how it works, is only open to college graduates. Al’s family may have been poorer than the other boys he played with, but I doubt that he understood what poor was.

My maternal grandfather died of TB when my mother was in her teens. Her mother pulled her out of school at 14, saying girls didn’t need an education. My mother loved school and loved poetry. She would have made a great teacher, but dutifully went to work helping out in my grandmother’s cafe.

My paternal grandfather was a Swedish immigrant who was blackballed in Cloquet for being a union organizer, meaning that nobody would hire him. My father, being the second oldest son, had to quit school at 14 and get a job driving a team of horses for one of the lumber companies to help support the family.

In the 20s my oldest uncle moved to Michigan where he got a job with Checkered Cab, which became part of GM. My father followed him there and also got a job in the car industry, only to lose that job in 1929. He stayed long enough to see two old ladies fighting over the contents of a garbage can, after which he returned home.

He was given one acre of my grandfather’s land, next to his parent’s house in payment for his support for the family. He got a job with the Match Factory, one of the industries in town then. The pay scales of those three industries were roughly equivalent at that time.

At one time, we had a phone but it got too expensive, so it came out. My father walked to work, so we didn’t need a car. As often as not, when I was called in for lunch, my mother had torn up a piece of bread and soaked it in milk. That was perfectly acceptable, and I ate it up hurriedly, so I could get back out and play. I didn’t know yet that I was poor, and I wouldn’t realize that until I got to middle school. There were still people in our neighborhood who were worse off than us.

After working at the match factory for 20 years, my father was the highest paid man in his department, at $1.25 per hour. When he got ahead in his work, they asked him to sweep the floor, and he got disgusted and walked off the job.

He first got a job at a lumberyard, and then was hired at the paper mill.

His old superintendent came to our house and offered him a foreman’s job. “How much does it pay?” my father asked.

“But think of the prestige,”The Super said.

“You can’t eat prestige,” my father said. And that was that.

My father hated going into debt and he would never hire anyone to do a job that he could do himself. But at the insistence of my mother, he borrowed enough to get started on our new house. With the occasional help of an uncle or two, he poured the concrete for the basement, put up the framework, did the plumbing, wiring and insulation, and roofed the building. When I was a sophomore in high school, we finally got a phone in that new house.

And now back to Al. He says that he began as a liberal, and what he wanted was for the poor to get welfare, free shelter and free food. And this is what conservatives THINK liberals want. They do not. What liberals want is for everyone to have a level playing field. They think that everyone should have the same opportunities for getting healthcare and an education and nobody should have to quit school because they need money more than education. They think that EVERYONE who works their 40 hours a week deserves to make a wage they can live on, as well as support their families.

People who complain about those who are on welfare have never actually MET anyone who is living on welfare. Their conception is that the welfare recipients are living in the lap of luxury. They remember Reagan’s talk of the welfare queens getting money from everywhere and everyone.

The fact is, most of the people getting welfare are single mothers whose baby’s fathers either can’t or won’t accept responsibility for their children’s welfare, and since the mother can’t get a job where she could actually live and still pay the babysitter, she has to go on the dole. It is not a luxurious lifestyle by any means. It is, in fact, a bare subsistence lifestyle.

Al says that as things got better, people wanted more. The thing was, actually, that as Al got very rich, he resented any of his money going to support the poor. The reason that more was needed was because the wage scale for working people was shrinking to pay for the increased demand for profits. So some of the people who need more now are working 40 hours a week, but are making substandard wages.

They are making substandard wages because that is all the government forces employers to pay them. If the employers could get by by paying them less, they would do that.

Executives of major corporations get paid, not for creating jobs, but for cancelling them. Labor is the biggest expense for industry, so the executives who can cut the most jobs get obscene salaries for doing so.
Economics is a very simple science. Jobs are not created by giving rich people more money. Jobs are created when customer demands for a product or service increases.

People need food, clothing and shelter, in that order. When they have money, they first buy food, because they can’t live without it. A little more money then goes for clothes, because (especially in this climate) they can’t live indefinitely without them. Finally, with a great deal more money, they look for shelter. As evidenced by the number of homeless on our streets, it is possible to live without that.

So the easiest way to create jobs is to get more money into the hands of the poor, because they will try to satisfy those needs for food, clothing and then shelter. However, giving the poor working class more money in the view of the corporations, is to take money from the profits, which is a problem for them.

Corporations are not equipped with brains, and their executives LOVE their huge salaries, so they will not budge unless they are forced to.

Al says the final straw was seeing a picture of a dirty city street with teenagers lying in it smoking, and he thought they should get off their asses and clean up the street. Well. maybe, but they would need to take some pride in doing that, and they will never take pride in cleaning it up unless they feel some ownership of it.

It is hard to take pride in anything if you know you are working hard, and getting further behind all the time.

Trust me on this: Most people WANT to have a job they can take pride in. It’s why our friends from the Iron Range will gladly pollute our water in return for getting good paying jobs for them. They are good paying jobs because the mines have unions, whose contracts insist that the jobs pay a good living wage.

My first job at the paper mill was cleaning up in the old smelter room. The old smelter room consisted of two barrel-like furnaces with metal doors hanging on each side. A rotary drum supplied evaporated remains from the soda cooking process called “black liquor” to be burned in the furnaces. If the operator was doing well, this material was moist and light, and easy to shovel. If it was too dry, it was dust. If it was too wet, it was tar. The operator took pride in doing his job well.

The shovelers took pride in being the best shovelers — that is, they shoveled the material into the center of the furnace, where it burned evenly, and kept the flow of recovered chemicals most efficient. Everyone needed to wear a respirator to keep from burning their lungs out. The air was often so dusty and smoky that you couldn’t see a man standing next to you.

These were union men and they earned a union wage. When both smelters were operating, it looked like a scene straight out of Hell. It was the most menial work possible, but still they took pride in their work.
Every once in a while, an explosion occurred when the molten caustic stream hit cold water. Grates flew up and the windows rattled, and one of the shovelers would smile and say, “We’re making money.” And they were proud of that, too.