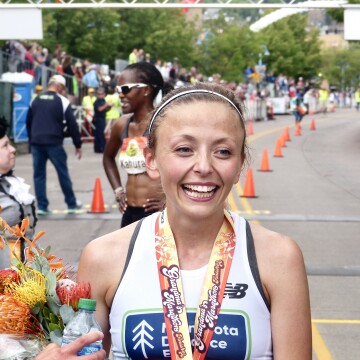 Dakotah Lindwurm wasn’t interested in female “equality” at the 45th annual Grandma’s Marathon, and she had no intention of “playing with the girls.” Instead, she spotted a group of men running ahead of her shortly after starting from Two Harbors for the 26.2-mile run along Lake Superior, and joined them.

The result was that Lindwurm, 26, from Eagan, ran away with the women’s championship with a time of 2 hours, 29 minutes, 04 seconds, which was not only her personal best, and the fastest time any Minnesota woman had ever finished in Grandma’s – by 4 minutes – but it also was her first marathon victory, and probably not the last.

“I didn’t see a single female the whole race,” Lindwurm said after her run, when she still had the permanent smile on her face that she wore the entire race, during which she waved and cheered back at the fans lining much of Hwy. 61. “I found a group of guys up ahead, and aI pushed to catch up and run with them.”

The faster pace allowed her to outdistance runner-up Katja Goldring, 30, from Flagstaff, Arizona, whose 2:31.30 was pretty good, but two and a half minutes behind Lindwurm.

Milton Rotich, of Kenya, won the men’s title and overall championship, also cruising to a decisive victory with a 2:13:04. He claimed he used a strategy of being patient to overtake and then run away from C.J. Albertson, 27, from Fresno, California, and a former star at Arizona State.

For Rotich, it was his first marathon victory in the U.S., and he said he wasn’t too concerned about catching Albertson, who led most of the first half.

“I was content to run in second place at the start,” said Rotich, who is a razor-thin 5-foot-9 and 130 pounds, and said he knows the course after finishing fourth here in 2019 in his U.S. debut.
“I only do two marathons a year, My strategy was to be patient.” 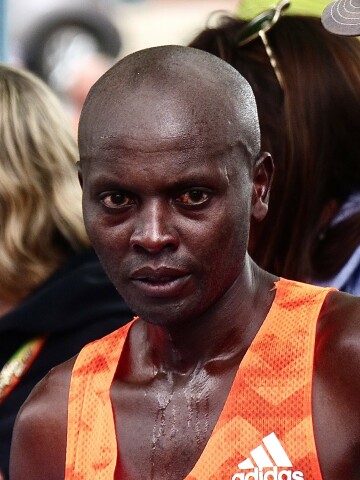 That seemed to play into Albertson’s theory of trying to intimidate his foes by going hard at the start.
“I tried to break people, to make them hurt. I would go really fast downhill, then try to stay consistent when it was uphill. When I went downhill, I’d be by myself, and when I went uphill, I’d be in a group.
“I wouldn’t say I was chasing him – he just stayed really consistent. He ran good, really solid the whole race. He didn’t go faster to get away from me; I went slower. I was hoping for a big downhill stretch at the end!”

Mohamed Hrezi, 29, of Philadelphia, won the men’s Garry Bjorklund Half-Marathon in 1:04:14, and Ann Centner, 29, of Tallahassee, Florida, won the women’s half in 1:14:23. Both were running at Grandma’s for the first time.

The fields for both the marathon and half-marathon were restricted for pandemic reasons, after the marathon weekend was only virtual in its 44th running, last summer.

JohnBoy Smith of London, England, came to race in the wheelchair marathon, and ran a 1:25:45, his personal best, which boosted him to the No. 1 rank in England, where he hopes to qualify for the Summer Paralympics team. 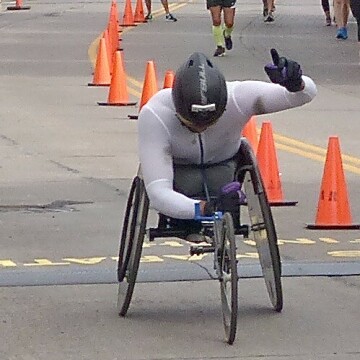 Ivonne Reyes, 48, from Mexico, won the women’s wheelchair title as the only female entry.

The weekend weather was near-perfect for the runners, because Saturday was cool in the morning, and rose to only about 63 by the end of the race, under sunny skies.

Overall, the women’s victory by Lindwurm remained the highlight, simply because she was constantly smiling and interacting with the spectators. She said she felt the presence of her mom, who died of cancer two years ago, throughout the race, and her attitude has always remained upbeat when she runs.

“A marathon can be something you dread,” Lindwurm said. “But when I’m out there, I’m having fun. There’s no reason to dread it, no reason to be afraid. The worst-case scenario is you run a bad race. I love running, even all the day-to-day grind, so the race is just the cherry on top.”

At 5-foot-1 and 105 pounds, Lindwurm is definitely aerodynamic. She was less so in high school, when she was a goaltender at St. Francis. In college, she focused on running at Northern State in Aberdeen, where she was an All-American.

She said she knows she has an unlimited future in marathon running. She was fourth at Grandma’s in her first try, and won it in her second try this year, when she ran with the guys to outdistance all the other women.