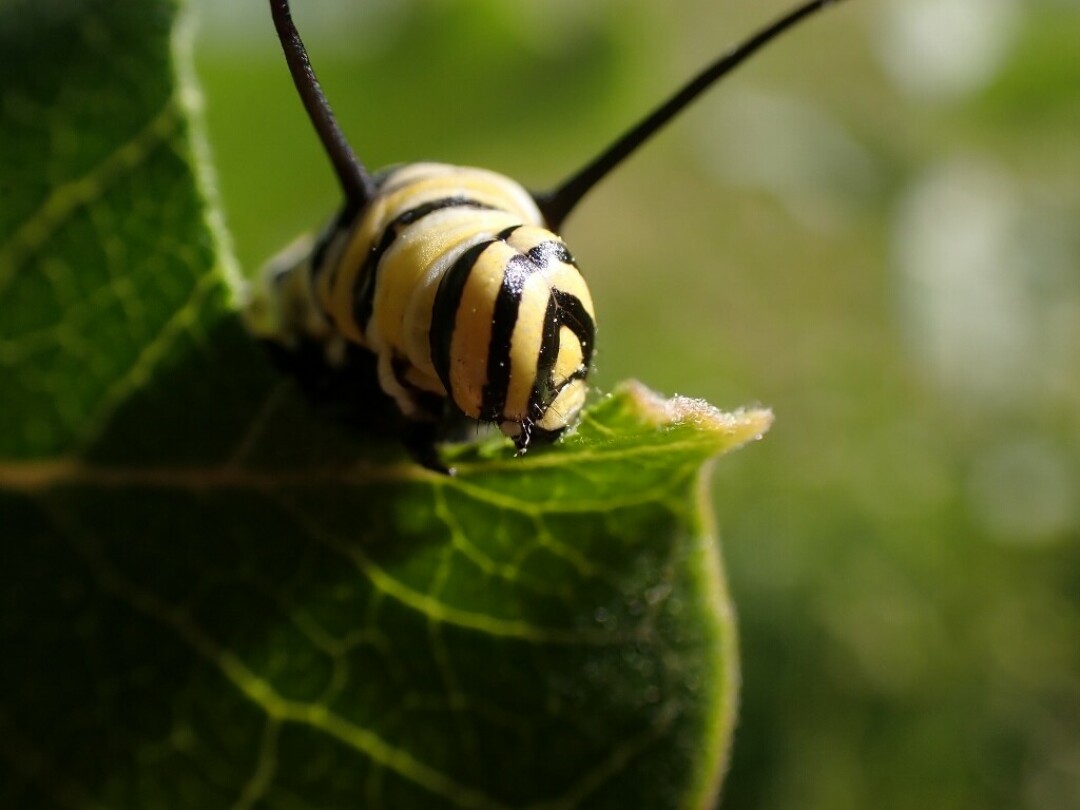 Caterpillars eat almost constantly, and can increase in size by 200 to 10,000 times before they become an adult. Photos by Emily Stone.

The temperature on the bank in Cable read 94 degrees when I returned from a field trip on June 4. It was only a short walk from the air-conditioned van to the dark, cool lobby of the museum, but the heat shimmered and blazed beyond its usual Northwoods intensity.

“I just watched through the front doors as a monarch butterfly laid eggs,” were the first words our docent, Carol, spoke from behind the front desk, even before my eyes had adjusted.

I turned to look at the small patches of milkweed we’ve let spring up on either side of the museum’s front walk. No black-and-orange monarch butterfly flitted among them now. No eggs were visible either, but since they are the size of a pin head, I’d need Superman’s vision to spot them from a distance.

I did go out the next day – before the temperature rose to another record high – to snap photos of the tiny, translucent domes. One photo even revealed the pale yellow silhouette of a developing larva inside.

I’ve read that monarch butterfly eggs can take anywhere from 3-6 days to hatch, so I wasn’t quite sure when I should expect to see caterpillars. I figured it would be soon, because warmth speeds up their development process, and we’d had more than enough heat recently.

At temperatures below 52 degrees Fahrenheit, monarch eggs and caterpillars don’t grow or develop at all. On a cool night, their bodies simply pause.

Extreme heat isn’t helpful, either. As temps approach 91 degrees, caterpillar growth slows and then stops. They seek shelter on the underside of leaves, or crawl down into the leaf litter to find relief.
If nighttime temperatures are on the cool side, caterpillars once again find refuge underneath milkweed leaves, shielding their body heat from the cold pull of the stars.

On days that are not quite warm enough, caterpillars bask on the top of the leaves, orienting their body broadside to the sun, for absorbing maximum solar radiation. Caterpillars who grow up in cooler temperatures may also have wider black stripes, which help to absorb heat from the sun.

Temps between 59 and 84 degrees Fahrenheit seem to be their happiest range, where they can grow the fastest. Staying warm hasn’t been a problem this year! 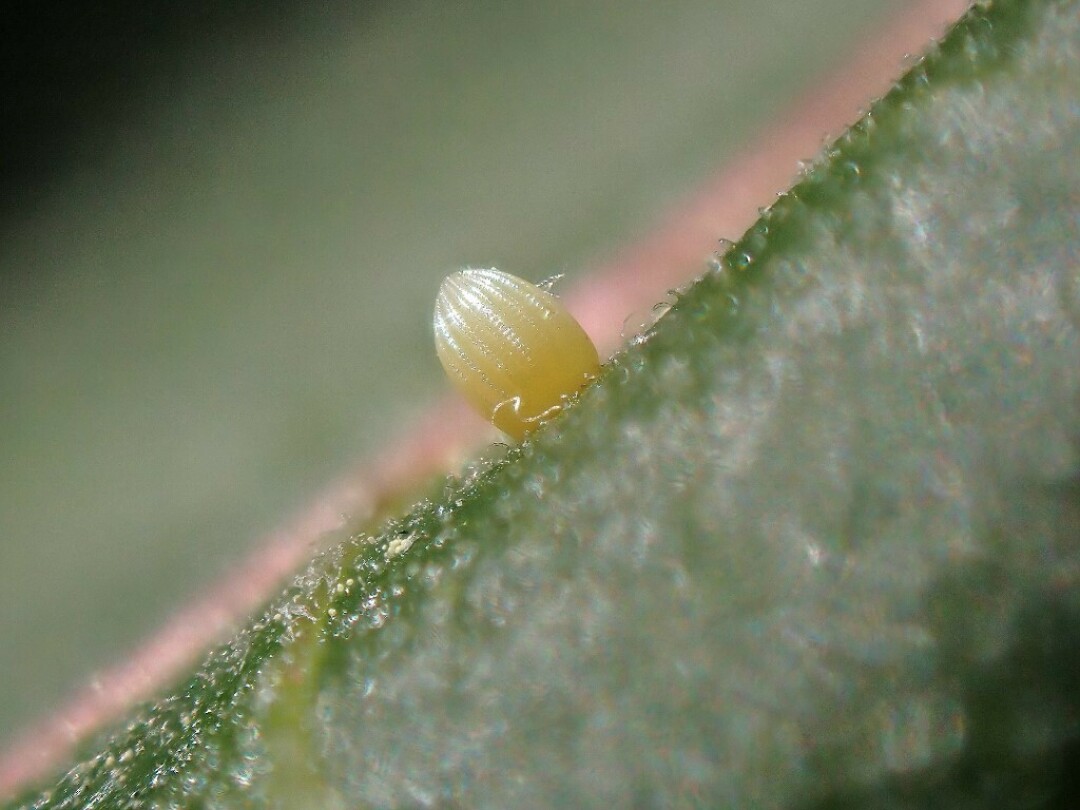 Monarch butterfly eggs are tiny and translucent. They are deposited on milkweed leaves, because that’s the only food that the caterpillars can eat.

Just four days after Carol watched the butterfly lay eggs, I paused on my way into the museum after my weekend. A little searching revealed a caterpillar or two, and after zooming in on the macro photos, I could even determine that these little critters were in their second instar already.

Monarch caterpillars shed their skin five times between when they emerge from their egg and when they develop into a pupa, each time revealing a larger skin waiting just beneath. Each stage is called an instar.
The first instar, when a caterpillar emerges from the egg, is almost translucent, and lacks the distinctive black, white and yellow stripes we expect. The caterpillars I spotted – just 4 days after eggs were laid – were distinctly striped, and also sported tiny black tentacles on both their head and their rear.

In the past two weeks, I’ve kept track of these little dudes almost daily. Well, maybe not the exact individuals I first spotted. By my last count there were 30 caterpillars in all stages of development on our small patch of milkweed. I have no idea which ones were my first two friends! With all the bad news about monarch populations in decline, this is a little spot of hope.

Having lots of caterpillars in a single place doesn’t equal a species no longer on the brink of extinction, though. Jan Sharp, a museum volunteer who also monitors monarchs for the Monarch Joint Venture, noted that in 2012 we had a similar early spring and big first crop of caterpillars. Then, when those caterpillars grew into adult butterflies and began laying their own eggs, danger moved in.

Parasitic wasps lay their eggs on monarch eggs, and the wasp larvae eat it from the inside. A different wasp lays eggs in a newly formed chrysalis, with the same deadly effect. Tachinid flies lay eggs on caterpillars. Lacewing larvae, like tiny crocodiles, devour eggs at lightning speed. And mites, spiders, ants, wasps, and bugs attack the smallest instars.

Caterpillars get safer the bigger they get, and their growth is truly amazing. From freshly hatched to entering their pupa, caterpillars increase their body mass anywhere from 200 to 10,000 times (depending on which source you read) in just two weeks – less if the weather is warm.
I’m not a fan of this season’s heat, but I do love monarchs. Maybe I’ll just watch from my air-conditioned refuge as I cheer “Grow little monarchs, grow!” 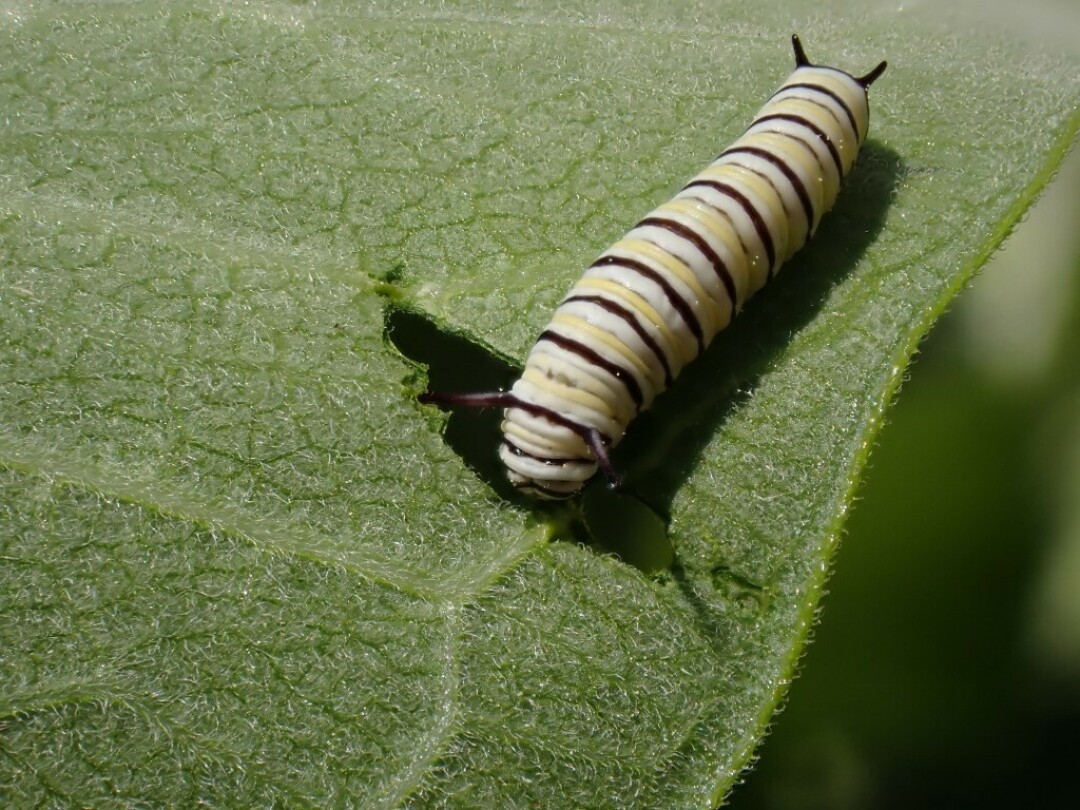 This little monarch caterpillar chomping away on common milkweed. It’s good that he’s growing fast, because smaller caterpillars get eaten by more things.