Magas, East ignored own rules to squeeze out Randolph 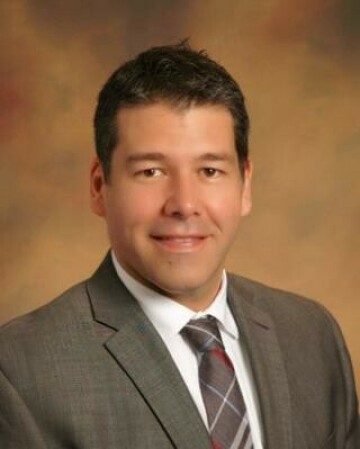 New Duluth school superintendent John Magas hasn’t quite finished his first full year as the new sheriff in town, but his legacy may already have been established. Magas, who started last July 1, has had a rocky ending to Year 1 by overseeing the elimination of Duluth East hockey coach Mike Randolph.

Randolph, who spent 32 years raising the Greyhound program to elite status and maintaining it with 18 trips to the state tournament, announced he was resigning two weeks ago, after finding what he said was no support from the administration against unjust complaints.

Magas maintained in two one-on-one interviews with this reporter this week that he “honestly was surprised” when Randolph submitted his resignation, despite the fact Magas was among the group of school officials who previously met with Randolph when he was informed that his contract would not be renewed.

In subsequent meetings, Magas established the ground rules for discussion with returning Greyhounds players, their parents, and the media. Magas has insisted that he must honor Randolph’s resignation and therefore will not discuss the situation. Nor will he divulge any findings from a three-month investigation ordered by District 709, apparently at his command, into complaints from a small group of players, who quit the team, complaining the coach didn’t play them prominently enough.

There is, however, considerable evidence that the district and the school administration violated the very rules, which they had previously compiled. These rules are spelled out in the player handbook issued to every player and to their parents, before each season begins. The list of rules must be strictly followed to avoid dismissal of any complaints. They originally were put together to streamline communication and solve problems. The three levels of procedure are prefaced by a statement, which says, “Any deviation from this plan will result in the expiration of the [complaint] process.”

The rules are quite logical, stating that a player must wait 24 hours after a disagreement, and then has “five school days” in which to discuss the matter with the coach, and follow up with a submitted written form to move the complaint to “Level Two.” The rules again stress that “failure to comply during the stated period of time (five days) will result in termination of the process.” Level Three involves contacting the school principal who will organize a four-person committee to review the matter. In Randolph’s case, it appears none of the steps of protocol was followed by the administration.

“I believe the matter was handled appropriately,” Magas said, during the exclusive interviews this week.

A player, who quit the team this past season, handed a written complaint to Randolph and his four assistant coaches, then immediately put the lengthy letter up on Facebook and Twitter and submitted it to the school administration. This occurred several weeks after he quit, which violated the first communication rule on the allowed time frame. One day later, instead of dismissing the case as per guidelines, human resources representative Bruce Watkins informed Randolph that an investigation would be conducted.

Our investigation has discovered that the behind-the-scenes intrigue undermining Randolph dates back to well before that situation, however.

A succession of emails from August, 2020, obtained from a parent of a past player, was initiated by school principal Danette Seboe and sent to the mother of a previously graduated player. It was dated August 11, 2020 — long after the handbook rules called for dismissal of such complaints. The mother started a chain of emails implying that the school was encouraging parents to fill out a harassment form to register complaints about coach Randolph. It also implicates Magas as supporting such solicitation of negative complaints, in violation of the school handbook rules.

“I have not encouraged anyone to respond to anything like that,” said Magas.

“The [harassment] form is difficult to find on the website. I have attached it here.” It is signed “Danette M. Seboe.”

“This form was sent to me by Principal Danette Seboe who encouraged me to fill it out and forward it to others who may wish to report any unjust treatment of their son while playing for Randolph; even witnessed abuse. The new superintendent, John Magas, informed her that he would like parents and/or current and former players to send this completed form to the fax number on the bottom of the form. Seboe is hopeful that this will then initiate an investigation by the school district. Magas is from the Green Bay school district and was unaware of Randolph’s history … fresh eyes! The process of filing the harassment form is the first step in which to get the ball rolling, according to Magas …”

One recipient got the form on Aug. 19 with a new message, stating:

“I want parents to know that this is an opportunity where the principal at Duluth East (Danette Seboe) and the new Superintendent (John Magas) are going to take action in regards to Mike Randolph’s inappropriate treatment of current and past student athletes on the Duluth East hockey program. This is the time to voice your concerns.”

That message urged the recipient to forward it to “any past or present family that has issues with treatment of their kids.”

The recipient of that message emailed it and the form to 27 other parents of current or former players, a number of whom had quit the program.

Magas reiterated that he hadn’t encouraged anyone to respond. “I’m not interested in creating a negative situation,” he said. “Especially now when we’ve moved on — the coach, the players, the administration and the parents are all moving on.”

Randolph said he got a copy of the progression of emails last August, from a supportive parent who had received them. After reading the emails, Randolph said: “How do you think I felt?” He added that he also hadn’t heard of any legitimate complaints from the investigation, which remains on the Magas “top secret” list.

After the returning players met with the administration group, several of the players told The Reader that their questions went unanswered. When the parents of current players met the same group of administrators later, they were handed a list of guidelines before the meeting, the last of which stated that because Mike Randolph had resigned, no discussion of Randolph, or of the findings of the investigation, would be allowed.

An assortment of players and parents attending the two meetings said the majority in attendance were in strong support of Randolph returning, and were anxious to discuss that, but were either stonewalled or ordered to not discuss their intended topic, Magas was asked if he believed that meant those players and parents were “moving on?” He said yes, he thought they were.

Magas also was asked if the handbook’s list of rules for complaints would offer protection for a new coach; he said it would. When asked if the handbook’s rules were applied in Randolph’s case, he said they were, refusing to acknowledge the obvious fact that the board violated its own handbook rules in dealing with Randolph, including solicitation of complaints long after required time limit had expired. He said, “Surveying parents was fair and productive,” without commenting on the handbook rules.

He also was asked if he thought any bright young coach who was aware that Randolph is considered by many as the best coach in Minnesota high school hockey, would consider taking the East job as his successor.

“I think there are a lot of highly qualified coaches who will apply,” Magas said, on Tuesday, June 22.
Those applications must already be submitted, though, because according to the posting of the job opening, applications were only being accepted through June 23, which was this past Wednesday. 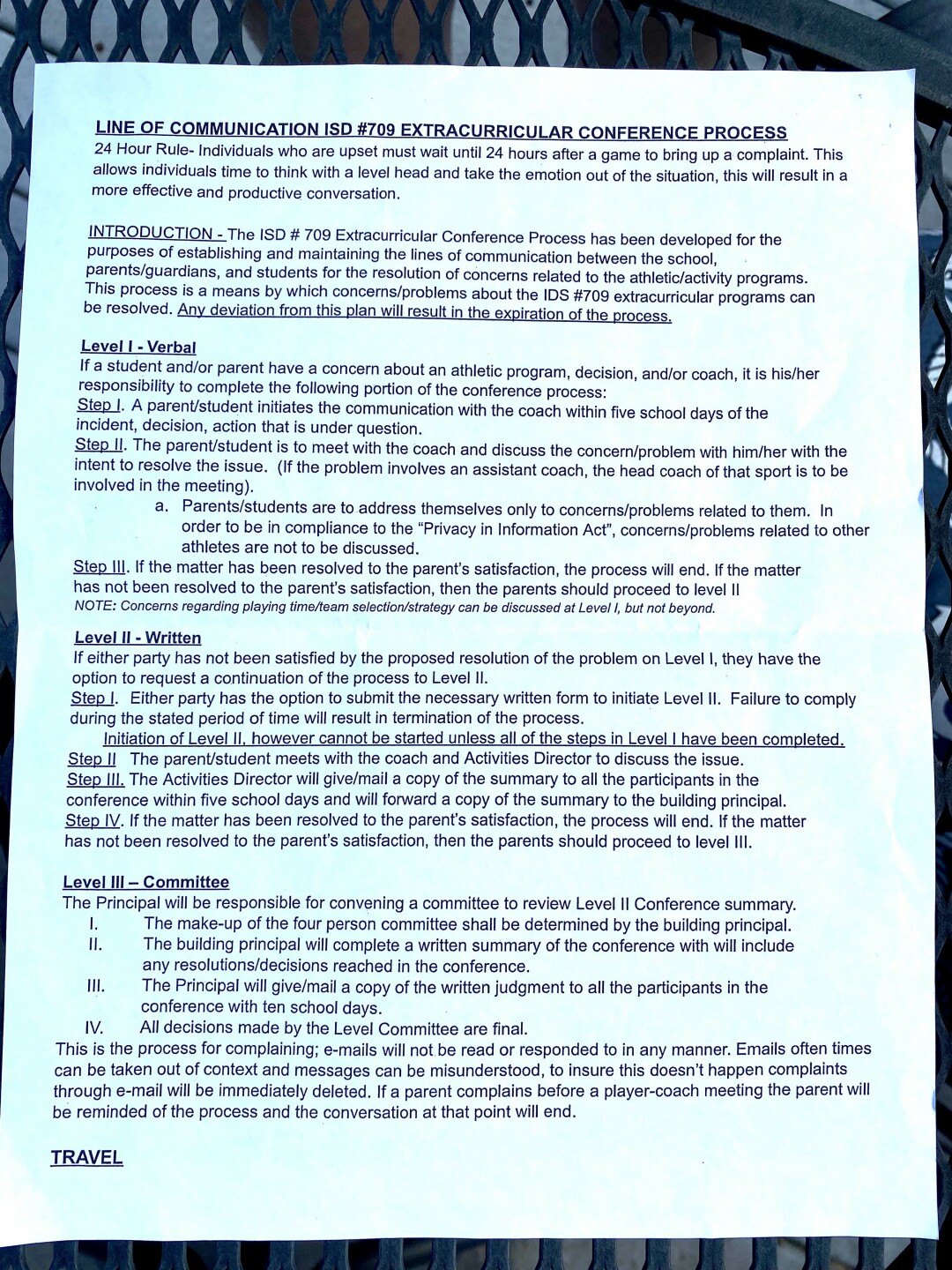