This guy rocked even when the music was called swing 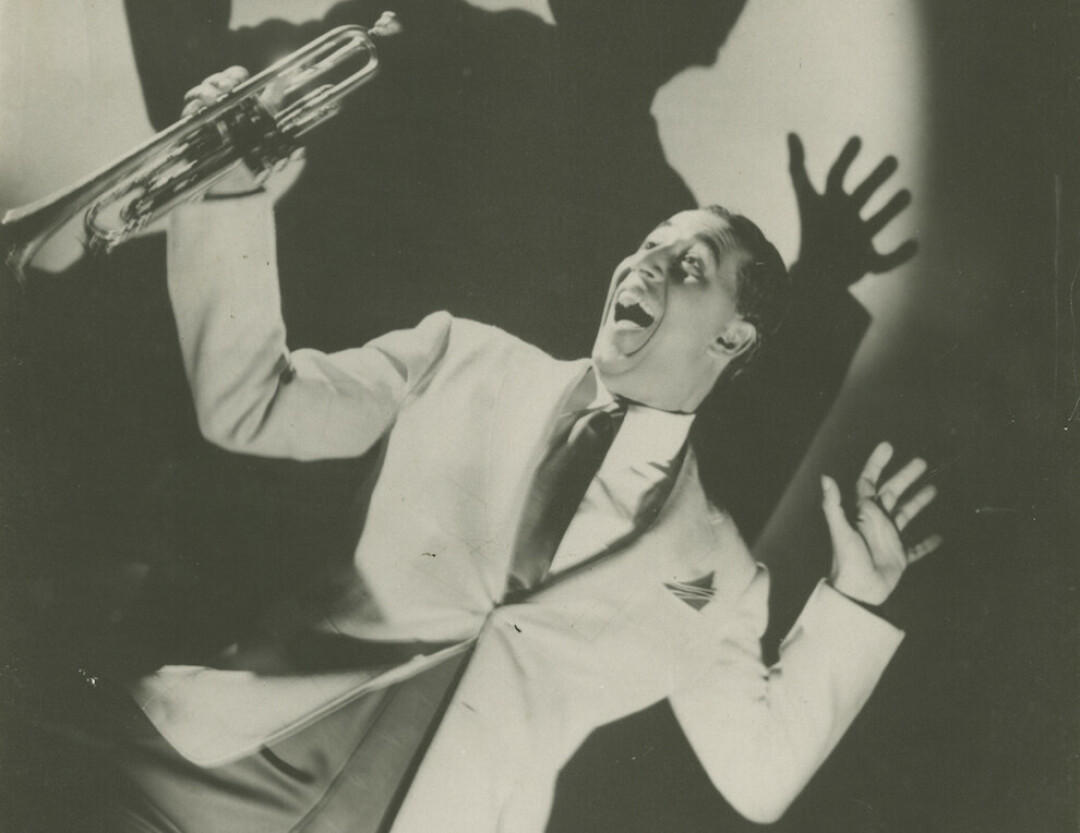 Louis Prima – was he the original rock ‘n’ roller?

I find it amusing that Guy Lombardo, a longtime orchestra leader who once was accused of producing “boring, mainstream pap,” is responsible for bringing wildman Louis Prima from his hometown of New Orleans to the larger world.
That’s just one gem unveiled in Louis Prima – The Wildest, a 1999 documentary directed by Don McGlynn and available on Amazon Prime.
Undoubtedly, the best thing about this documentary is seeing the archival footage of Louis Prima in action, blowing his trumpet and jumping and jiving on stage as the band wails around him, especially in segments from 1948 to 1960 when he sang with the beautifully po-faced Keely Smith.
According to the documentary, it was Prima’s idea to present Keely as a complete opposite to him on stage, with a deadpan delivery and reaction to the antics of Prima and the band. She ended up becoming his fourth wife, and when she divorced him in 1961, he replaced her with a young woman who would become his fifth wife.

Louis was a womanizer, and the women loved Louis. Several of his friends and colleagues interviewed in the documentary – made 21 years after his death in 1978 – say the only other popular entertainer who could fill a room with excited women like Prima was Sinatra. And we also learn that when Prima and his band played Vegas in its very early days, Sinatra and the Rat Pack were there in the back of the room, taking notes and digging Louis’ style.

Appropriately, the documentary begins with Prima performing his hit “Just a Gigolo” – from his 1956 album The Wildest. The much-covered “Just a Gigolo” was released by Prima as a medley with “I Ain’t Got Nobody.”
What we get in the Prima package is a great band with impeccable timing, high energy and comedy.
We hear some of Prima’s early history in New Orleans from his longtime saxophonist Sam Butera, who tells us that Prima’s grandparents moved from Sicily to Argentina, and then to New Orleans. Butera says when Prima was born in New Orleans in 1910, the French Quarter was more Italian than French. Prima’s mother was a performer in minstrel shows, and his first band was a trio with his brother and sister.

Brother Leon Prima said Louis was constantly soaking up all the music of New Orleans, even poking his head into black churches to hear what they were doing.
Prima gets gets fired from a local orchestra, but starts making a name for himself as a straight-ahead jazz trumpeter in his hometown. The band he eventually assembles, the New Orleans Gang, includes the great clarinetist Pee Wee Russell.
Prima, we learn, had a unique talent for eliciting call and response from band members, and we get a great segment where he and Pee Wee are trading off.
In 1934, at the age of 24, Prima and the band go to New York, where he is “discovered” by Guy Lombardo, who helps Prima secure a regular gig at the Famous Door on 52nd Street, a street that soon became jazz central thanks to Prima’s influence there.
“He was a new kind of entertainer with lots of energy and could get a laugh anytime he wanted,” said fellow jazz band leader Woody Herman. “He had his own style.”
Prima decides to move the band to the West Coast and opens a club in LA called the Famous Door. The club is filled nightly with the biggest names of the day. Prima is hanging out with new pals like Spencer Tracy and Walt Disney, and he’s dating platinum blonde bombshell Jean Harlow (until her sudden death in 1937). 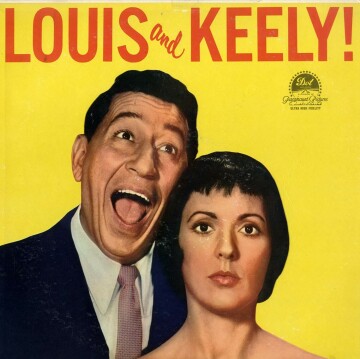 As a comic foil to his manic personality, Louis Prima had singer Keely Smith adopt a deadpan onstage personality, as shown in the cover of this 1959 recording. The photo used on the cover was also used as one of their publicity photos.

In 1936 Prima and the New Orleans Gang recorded Prima’s song “Sing, Sing, Sing (With a Swing),” but it wouldn’t become a hit until the next year when Benny Goodman released an extended 8 minute and 43 second instrumental version of the song (which was inducted into the Grammy Hall of Fame in 1982).
Next we meet Jimmy Vincent, Prima’s best buddy and his drummer for 24 years, beginning as a teenager. There’s a great moment of classic rock drumming before there was rock from Vincent in a segment that is not dated, but we can figure is pretty early because Vincent looks like a teenager as he beats the hell out of the skins.

Speaking of very early rock, there’s a segment showing Prima doing a song I think is called “Gleeby Rhythm is Born” (he called his band at the time the Gleeby Rhythm Orchestra) that sounds to me like the very first rock ‘n’ roll performance.
Prima’s pal, the late writer Nick Tosches, points out that Prima was one of the few white orchestra leaders that played the Apollo Theater in Harlem.
“Everybody loved Louis,” Tosches says.
“You couldn’t help it. He was magnetic,” said Gia Maione, who would eventually replace Keely Smith as Prima’s female foil and would become his fifth wife in 1963.
Prima also played to his heritage and recorded Italian-themed songs, making him unique among stars of the day by embracing his ethnicity. Even during World War II when the Allies were fighting the fascists of Italy and Germany, Prima continued releasing Italian songs to popular acclaim.
In 1948, Prima was in need of a new female singer. He was playing at a club in Virginia Beach when he heard there was a 20-year-old singer in the audience. He invited Keely Smith on stage to audition before a live audience. Legend has it that she was in a swimming suit and had to borrow clothes to get into the club.

“I went to work with him that night, right then and there,” she says in the documentary.
Prima began to mold and develop her on-stage personality and singing ability while they worked at dives with little groups rather than his big band. While he danced and jumped around the stage, he had her stand off to the side looking slightly distracted and completely unmoved by whatever the boys were doing. It is a beautiful thing to see. 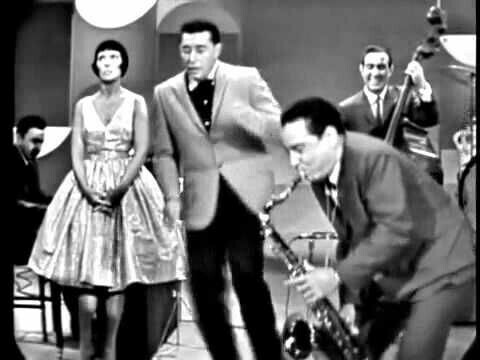 While Louis Prima dances and Sam Butera wails on his sax, Keely Smith stands in the background, apparently disinterested in the their foolishness.

In November 1954, Prima and the band got a two-week gig in a sleepy little place called Las Vegas. Before taking the job, Prima picked up saxophonist Sam Butera in New Orleans.
“The group didn’t really cook until Sam,” Keely said. “Sam was the front Louis needed to work off of.”
And Louis Prima is just what Las Vegas needed, and vice versa. It catapulted him to superstar status.
Documentary interviewees say Prima owned his standing-room-only audiences with a dynamic show of non-stop music. He opened every show with “When Your’re Smiling” and closed with “When the Saints Go Marching In,” but in between, every night was different.
He was doing three shows a night, with the last one at 5:10 am, and the stars were still coming in.
One of the documentary interview-ees mentions that Prima was the only person who played Las Vegas to get a billboard endorsement from Howard Hughes. It said, “Every time I see them they get better.”
Prima could do now wrong. Every song released was a hit. He and he band were doing every TV show. And both Prima and Keely were doing successful solo work as well.
Keely said Prima started gambling, drinking heavily and running around with other women.
“He couldn’t help himself,” she said.
They divorced in 1961, and the next year Prima added the woman who would become his fifth wife to the band after, like Keely Smith, she passed a live audition.
“I don’t know where idolatry ended and love began,” she said.
As rock begins edging out other once-popular musical genres in the mid-1960s, Prima reconnects with his old pal Walt Disney and is tappped to be the voice of King Louie, the orangutan in the 1967 Disney adaptation of Rudyard Kipling’s The Jungle Book. (In a side note, Disney originally wanted Louis Armstrong to voice King Louie, but in an early nod to misplaced political correctness, the Disney folks decided they did not want to make a connection between an ape and a famous Black American (but it was OK for an Italian-American to voice an ape).

Prima and Disney had plans to do more together, but Prima’s health problems prevented that. He had a heart attack in 1973, and the next year moved back to New Orleans for a hotel gig. He began experiencing headaches that turned out to be from a being tumor in his brain stem. Because of the location, there was no chance for an operation. He suffered a brain hemorrage and slipped into a three-year coma before just giving up and dying.