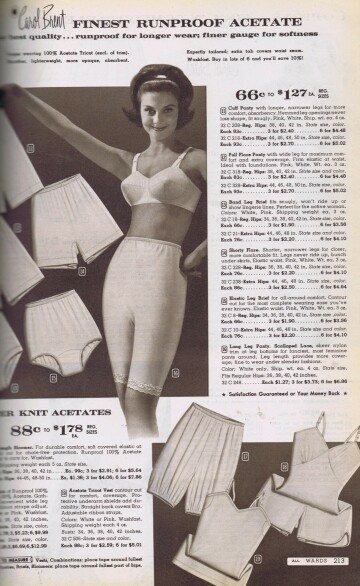 Editor’s warning: Some readers may find some of the content here offensive. You’ve been warned.

When I was young, my mother always got big catalogs from Montgomery Ward, Spiegel’s and Sears Roebuck. Before we had indoor plumbing or toilet paper, the Sears catalog did double duty. The internet put a stop to those companies and their catalogs and now we get those little catalogs that are, for the most part, thrown in the recycling bin.

For some reason or other, I get a lot of those little catalogs in the mail. I rarely order from one of them and I am usually sorry when I do. I think I bought some socks from Haband one year, so their catalog is in my mailbox just about every month.

Another is the KingSize catalog. I think the king they are referring to is Henry VIII. From the pictures I’ve seen of him, if he would dress all in orange, he would look like a gigantic pumpkin. I can’t imagine what I would have bought from them.

I did buy a boat anchor from Heartland, and that will be the last one, no matter how many catalogs and emails they send me. It was supposed to be a combination phonograph/cassette player that would convert songs to MP3 files, and burn them onto a CD. I thought it would be great to record all the 45s from my jukebox onto a CD, which I could then download into iTunes.

It was too heavy for me to carry, so I had my son bring it downstairs where I would do the recording. Of course, all the packing material was discarded long before I found that the phonograph was defective.

I already had equipment from DAK Industries which took input from any audio source and converted them to MP3 files, but that was more complicated, and I had taken it apart after I recorded all my 78 RPM records and the band music I had on VCR tapes, thinking I was done with that.

DAK, in the meantime, updated their software, so in addition to relearning the hardware quirks, there is another software learning curve which I have so far avoided.

As an old man who grew up in an era when druggists sold condoms under the counter, I have to admit that this flagrant display was truly shocking.

There was even one item made from a pinkish molded rubber that was (I think) strictly for men: It was called, cunningly enough, Amanda’s Kitty. From all appearances, Amanda is a very petite woman with a severe Brazilian hot wax. The only other possibility is unthinkable. In the interest of diversity, it seems to me there should be a darker model called, say, Miss Kitty’s Amanda to distinguish it. Apparently, we haven’t gotten that far yet.

Dr. Leonard’s claims to be My Authority on Health and Wellness, but the cover most often features women’s outfits and SHOES. It does have a few things for men, safety bars and devices that will help me get off the toilet, and braces for every part of your body.

This is disturbing, because I doubt that many men are aware of the implications. Are women keeping something from us? Are the aliens here, and stealing their affections by using their abnormally long thumbs in unspeakable ways? Remember that song “One-Eyed, One-Horned Flying Purple People Eater?” Have we been misconstruing the meaning of that song all along?

But there is a reason for the For Him section. It takes your mind off the For Her section. There is the power Masturball, which looks like a large Eight Ball with a hole through it. They have taken the most important part of a blow-up doll, leaving out the body and the eyes, but adding a tongue. There is the Solo Stroker Wand, which looks like a big lug wrench to me.

This section has Amanda’s Backside, which I will leave to your imagination, for men who go for that sort of thing. Amanda appears to be a well-rounded person. And that equipment reminds me of something else: many years ago, I saw a video that had a profound effect on me. The circumstances are lost to history; I don’t have a clue how I came to be watching it. That’s my story and I’m sticking to it.

It was a seminar entitled, “Everything You Wanted to Know About Sex, But Were Afraid to Ask.” It was conducted by one Annie Sprinkles, a former adult film star with absolutely no sense of modesty. Using a tool usually used by doctors while delivering a baby, she spread her legs and invited people to peer into her vagina.

Then a gentleman asked her the question that had haunted me ever since I watched “Last Tango in Paris” but I had no clue whom to ask. I’m sure any man who asks never gives this question a second thought:

“Well,” Annie replied, “You know how good it feels to take a big dump? It’s like that.”

And I thought, Wow! Any woman who thinks a big dump is as good as an orgasm should be looking for a different boyfriend.