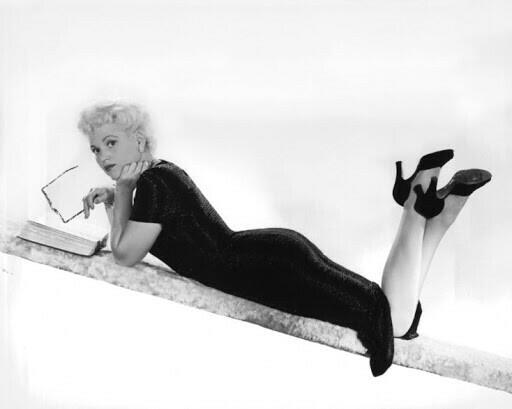 With a life cut short by breast cancer at age 43, Judy Holliday left behind some great comic moments.

Judy Holliday absolutely stole the show in her 1951 breakout comedy role Born Yesterday.
At the Academy Awards for that year’s films, she was the underdog nominee for a Best Actress Oscar because she was up against a couple of powerhouse actors and roles, including Bette Davis and Ann Baxter in the ultra-catty All About Eve, Gloria Swanson in Billy Wilder’s powerful Sunset Boulevard and Eleanor Parker exploited in Caged.

Holliday had played the role of Billie Dawn in Born Yesterday on Broadway in 1946, but when Columbia Pictures wanted to make a film version, studio head Harry Cohn dismissed Holliday as “that fat Jewish broad.” But Holliday had fans in director George Cukor and superstars Katharine Hepburn and Spencer Stacy, who cast Holliday in a juicy role in the 1948 classic Adam’s Rib, proving to Cohn Holliday’s marketability. But he really got it when she won the Oscar for her performance in her first starring role, Born Yesterday, beating one of her advocates, Hepburn.

Born Yesterday is not included in a collection of Holliday films being shown on the Criterion Channel to mark the 100th anniversary of Holliday’s birth this month.
In a career cut short by cancer, Holliday appeared in six Broadway shows and eight feature films, winning an Oscar and Golden Globe for her first hit film, Born Yesterday, and earning three more Golden Globe nominations and two Tony Awards.
The Holliday festival begins with her follow-up to her Oscar-winning role, also directed by George Cukor, The Marrying Kind, with co-star Aldo Ray.
While making that movie, Holliday was subpoenaed to testify before a Senate subcommittee regarding Communist subversion in Hollywood. Luckily for her, the senators were unaware of her high intellect (she was reputed to be in the genius category with an IQ of 172) and fell for the dumb blonde persona they had seen on the screen and that she replicated for them in the hearing room. She played them like a violin.

While not being accused of being a Communist, the taint of being summoned to testify put her in a graylist that kept her off radio and television. However, it did not affect her contract with Columbia.
The Marrying Kind tells the story of a marriage through the eyes of a couple in the throes of divorce, recounting the ups and downs of their life together to a judge who really wants to be a marriage counselor. I’ve never been a fan of Aldo Ray’s caveman acting style, and it all started here in his first starring role.

Despite some critiquing of traditional gender roles, the story by Garson Kanin and Ruth Gordon doesn;t hold up well. I found myself not caring for this couple at all.
Next up is the 1954 movie It Should Happen to You, another Cukor-directed Judy Holliday vehicle, which also introduces Jack Lemmon to the world. It is the full-blown, flustered, blustering and yet sauve and likeable Jack Lemmon moviegoers of the 1950s and ‘60s grew to know so well. He was fully formed as a harassed man in his first film.

There is also a story that studio head Cohn thought Lemmon should change his name so critics couldn’t use it against the movie should it suck, but Lemmon used the current anti-communism furor to argue that if he changed it, people might think he changed it from Lenin. I know it sounds crazy, but they were apparently very crazy times.

The greatest attribute of Judy Holliday is her believability. No matter how harebrained her character – and this character, Gladys Glover, takes the cake in harebrainedness – you believe her. She seems like a real person, not an actor playing a role.
Screenwriter Garson Kanin originally wrote this movie as a vehicle for Danny Kaye, but his wife, Ruth Gordon, convinced him to make the dreamer protagonist a woman so it could star Holliday instead.
Gladys moved to New York City from upstate New York to become famous, and after two years, she’s still a nobody when she runs into documentary filmmaker Pete Shepard (Lemmon) in Central Park. He is obviously taken with Gladys, but soon learns Gladys has no special talents or skills that would make her dream of fame realistic, and he blows his top in what would become classic Lemmon style when she spends a good chunk of her hard-earned money to put her name on a billboard overlooking well-traveled Columbus Circle. 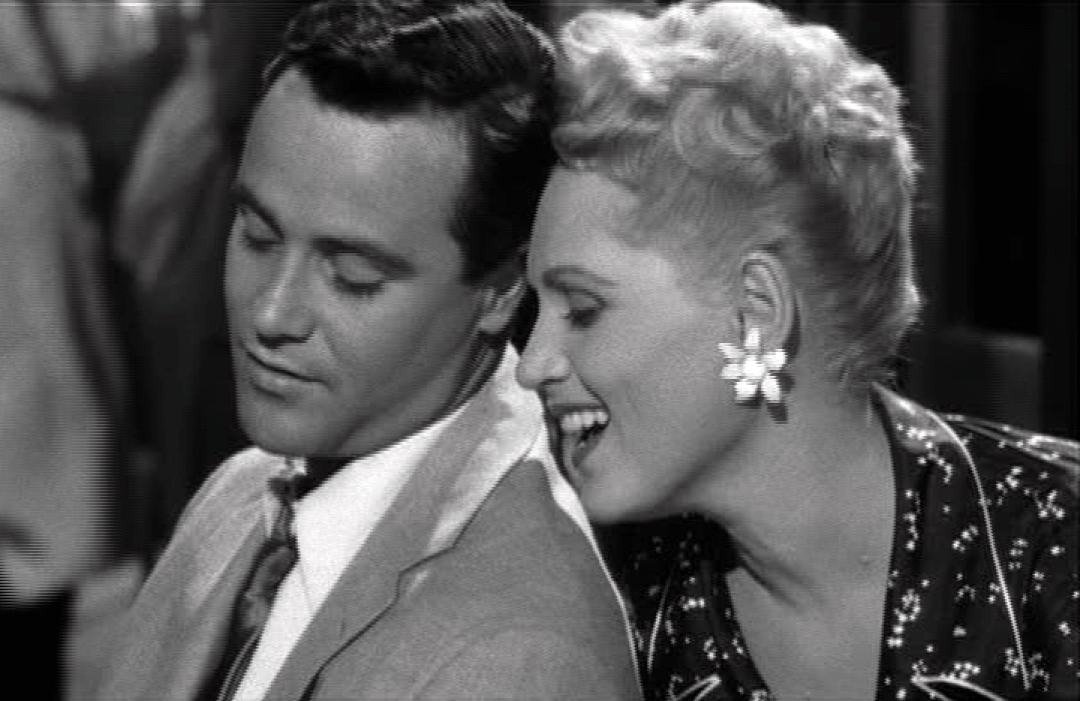 In a beautiful and very natural scene, Jack Lemmon and Judy Holliday exhibit their musical talents, he playing piano and singing and she singing as they talk in a piano bar in It Should Happen to You (1954).

And it works. Her name’s on a prominent billboard, so she must be famous. People suddenly want her autograph.
There’s a great scene that takes place in Macy’s – where you can see the Gladys Glover billboard through a window – where peole are clamoring for her autograph. It includes the great character actor Frank Nelson with his famous catchphrase delivered in a supercilious voice: “EEE-Yeeeeeeeeesssss?”
Luckily for Gladys, she has chosen a billboard that is a favorite of a prominent soap company. She makes a deal with the company to surrender the one billboard for six, and that spins off into a management deal and endorsements until she is so famous she can’t stand it.
It’s a goofy, lightweight story that relies on Holliday’s believability. And it’s fun to see Lemmon in his very first role being so Lemonny.
Columbia must have liked the Holliday-Lemon chemistry because they put them together again in Phffft (also 1954). We meet them as a married couple, he reading a pulp novel and she summoning up courage to tell him she wants a divorce.
She goes to Reno for the divorce. He moves in with a buddy, played by a very beefy Jack Carson, and then we go into flashback mode to see how they met, got married and fell apart. It includes Lemmon growing a moustache and an amusing dance scene between the stars.
Kim Novak has a fun supporting role as a young party girl who is enlisted by the slippery Carson to date the newly divorced Lemmon.
Next up is the 1956 workplace comedy The Solid Gold Cadillac, starring Holliday as Laura Partridge, small stockholder in a company whose pertinent questions at the annual stockholder’s meeting earn her a spot in the company just so she will shut up.
It’s another Broadway hit adapted for the screen.
Holliday is teamed in this one with one of my favorite actors of the ‘50s, Paul Douglas. They team up to take down a group of shady corporate heads, including the always officious Fred Clark as obnoxious company treasurer Clifford Snell.
The resolution to the attempt by the shady characters to force Douglas and Holliday out of the business is accomplished with a nod to the resolution in the 1947 Christmas movie Miracle on 34th Street, lots of letters from stockholders.
I skipped watching the next offering from 1957, Full of Life, which pairs Holliday with Richard Conte in what sounds like a very slight story about a couple expecting their first child and faced with home repairs they can’t afford. So Conte has to overlook the troubled relationship he has with his stonemason father, and issues of family tradition and religion ensue. 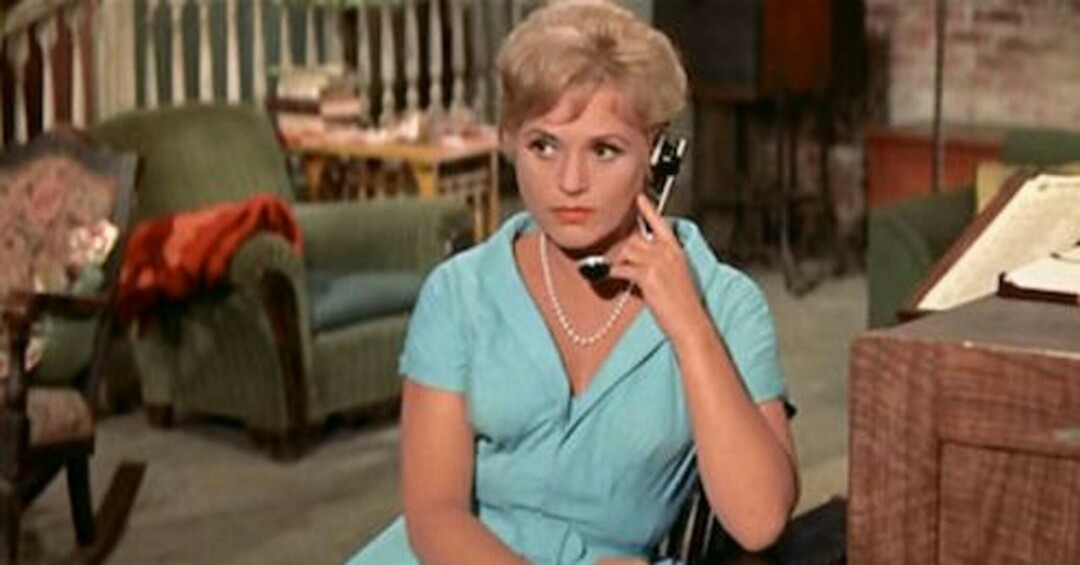 Judy Holliday as Ella Peterson in her last film, Bells Are Ringing.

I almost fell asleep typing that description. Maybe I’ll give that one a shot some night when I’m having trouble sleeping. Maybe Judy Holliday can put some life into what sounds like a thin TV sitcom plot.
The final offering in this Holliday celebration is a musical extravaganza called Bells Are Ringing, again reprising a role she created – a Tony Award-winning role – on Broadway and written for her by her friends Betty Comden and Adolph Green (before they became known as “the longest running creative partnership in theater history,” in 1938 Comden and Green were in a comedy troupe called The Revuers with young Judy Holliday and Leonard Bernstein on piano – he was Green’s apartment mate).

The Broadway production was directed by Jerome Robbins and choreographed by Bob Fosse. Vincente Minnelli directed the 1960 film version of the Bells Are Ringing, a lush technicolor musical that pairs Holliday with Dean Martin.
The story is a typical suspend-your-disbelief Broadway farce centered on a telephone answering service where Holliday’s character gets too involved with the customers, one of whom is Dean Martin’s character, who wants Holliday to speak to him like an old lady. Ugh!
Well, they just don’t make them like that anymore. At least Judy got to sing and dance in what would be her last movie. The same year it was released, Holliday was diagnosed with breast cancer. She died in 1965, just days before her 44th birthday.