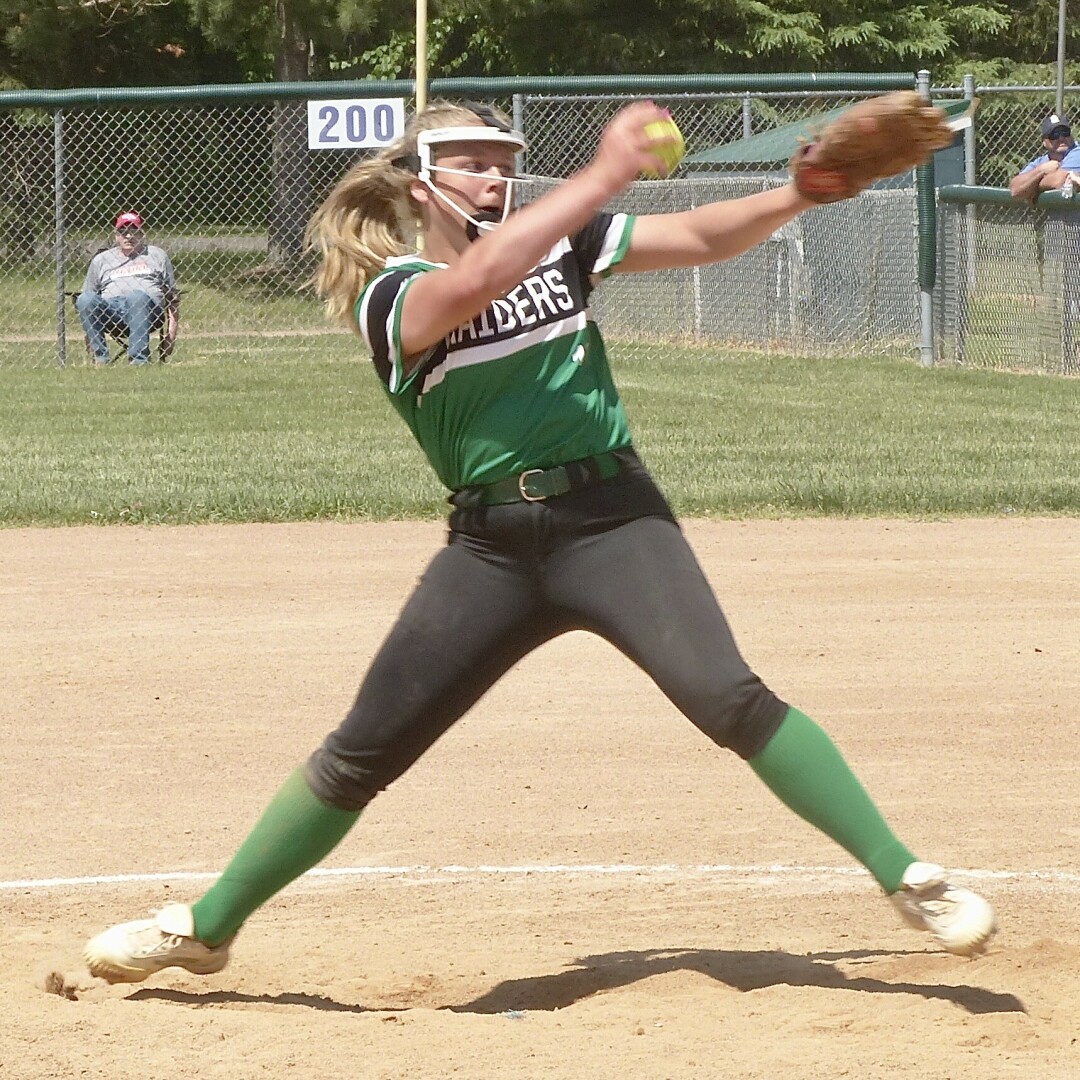 There are more classes than a normal sports fan can keep up with, but when the Section 7AA championship is decided Thursday afternoon at Cloquet, it will be the highlight of all of the sections softball competition, because of two amazing sophomore pitchers.

Miranda Gernander is the sophomore pitcher for Greenway of Coleraine, which will take a perfect 24-0 record into Thursday’s championship game against Proctor, which was the No. 1 seed ahead of Greenway when the section made its selections, and that rank is mainly because of sophomore pitcher Maddy Walsh.

The Rails were seeded No. 1 but got knocked into the elimination bracket by Moose Lake/Willow River, which advanced to the showdown of tournament unbeatens to face Greenway Tuesday afternoon. But Greenway’s heavy-hitting Raiders hammered ML/WR 10-1 behind Gernander’s pitching, while Walsh and the Rails had to defeat Eveleth-Gilbert to stay alive, and then had to move across Braun Park’s cloverleaf of fields and face Moose Lake/Willow River with the loser being eliminated.

Proctor prevailed 8-5, and now gets the chance to avenge its only defeat of the regular season — a 7-5 decision in extra innings to Greenway, as Miranda Gernander beat Maddy Walsh. The championship means that if Proctor beats Greenway, the two will have to come right back and play again, with both teams having a loss. That’s what Greenway earned by keeping its regular-season unbeaten streak intact in the sectional.

Despite being undefeated and having beaten Proctor head-to-head, the once-beaten Rails were seeded 1 and unbeaten Greenway 2. None of that matters now, because one of the two will advance to the state tournament and the other will be through for the season.
Both teams have strong hitting, although Greenway might have more power up and down its lineup. Gernander is consistently strong in the circle, while Walsh may have more velocity in her pitching, and also has a change-up that can freeze a hitter trying to focus on her speed. Both teams play solid defense, too, which all adds up to a game, or games, that will be the highlight of the softball season in Section 7.

The reaction to the resignation submitted by Duluth East hockey coach Mike Randolph has remained a prime topic of conversation throughout the area, and also throughout the state. The Minneapolis Star Tribune headline said: “Legendary coach resigns.” Some of the state’s most esteemed hockey coaches have paid tribute to Randolph for running a hockey program that is the envy of other coaches throughout the state — coaches like Lee Smith of Eden Prairie, Curt Giles of Edina, Mark Manney of Andover are just a few of the unanimous outpouring of shock and dismay at Randolph leaving the program.

The way the situation broke down is that East didn’t have one of the stronger teams Randolph has built over his 32 years at the helm. In fact, it was one of the lightest on upper classmend as well as skill, and some sophomores and ninth graders moved in to fill out the lineup, and proved to be among the better players.

Randolph handles his program differently from any other coach. A couple decades ago, he got East to withdraw from the Lake Superior Conference to focus on scheduling the best teams in the state. In Section 7AA, Grand Rapids and Cloquet-Esko-Carlton were the only AA threats, until Marshall moved up from Class A. Randolph had encouraged Hermantown to move up also, but the Hawks have remained a dominant team in Class A. So while maintaining its rivalries with Denfeld, Cloquet, and Grand Rapids, East went south to face the best teams Randolph could schedule.

He found willing takers in Edina, Hill-Murray, White Bear Lake, Blaine, Eden Prairie, Minnetonka, Centennial, Elk River, Lakeville South and North, Moorhead, Maple Grove, and others. Along with such games, Randolph scheduled them and others for pre-season scrimmage competition, knowing that facing top competition often would strengthen his team for the season. In order to cover the expenses of those trips, the Hounds conducted an annual wreath sale that made a large amount of money.

On top of that, Randolph was so dedicated to the younger players coming up, he conducted annual camps, for PeeWees all of June, and for Bantams all of July — both going five days a week and stressing fundamentals and game situation competition. It was the ideal way to give prospects four years to get used to how to play the game, and how to play the game Randolph’s way. 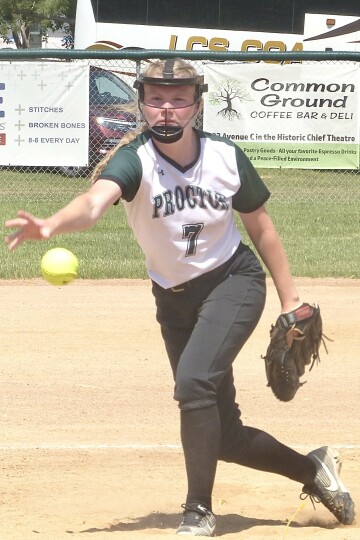 Proctor’s pitching ace, Maddy Walsh, also a sophomore, has excellent speed and a devastating change-up, which she used to beat Eveleth-Gilbert and Moose Lake/Willow River Tuesday.

Hockey coaches make such small salaries, usually from $2,000 to $5,000, which breaks down to pennies per hour for all their work, and many of them conduct summer camps or clinics to bolster their salaries. Randolph, year after year, paid for ice time and the salaries for any staff that helped him, and put the rest of his camp earnings into the fund with the wreath money. That allows the Hounds to travel by coach bus instead of school bus, and they stay at Holiday Inn-level hotels if they have to stay over.

No other coaches donate their summer earnings to the team’s financial fund, and Randolph’s assistant coaches never knew he did that. It became an ironic issue in 2003, when an administrator wanted to fire Randolph, and did, citing a Minneapolis Tribune “investigative” story that disclosed discrepancies found in the wreath fund-raising budget. The masses figured Randolph was scamming the system, but the story never gave figures, and never seemed to comprehend how ridiculous it would be for any operation to complain about a discrepancy when the fund showed more than it should have!

The Star Tribune has run several excellent articles on the current situation, except for singling out Randolph’s earlier hassle with the administration and stating that one of the issues was a discrepancy in its fund-raising wreath sale.
In that earlier case, the administration hired a person to conduct an investigation, but really it was to eliminate Randolph from the job. He was informed the administration appreciated all he had done for East and its hockey program, and wanted to hold a Mike Randolph Day with all sorts of celebrations. Randolph was asked what he thought about that, and he said it sounded like they wanted him to resign, which he wasn’t going to do. The investigator then said the administration was not going to renew his contract. But after an amazing number of Randolph’s former players and other recognized hockey people filled the school board meeting’s chambers, the board gave in and rehired Randolph after one season out of action.

In this case, a new superintendent, John Mara, is in charge, having been hired a year ago from Green Bay. He may be getting a lesson himself of how big hockey is in Duluth, and especially Duluth East, but the same agency was hired to conduct another investigation into allegations of “abusive” coaching language by Randolph.

The accusations came after two players, both seniors who were getting diminished ice time because they simply didn’t perform up to team standards, told Randolph they wanted more ice time. Randolph told them they could control how much ice time they got, all they had to do was perform better. But they said they had decided to quit the team. They then tried unsuccessfully to recruit other players to join them in leaving the team. The others refused and stayed on the team.

The school board “investigation” went on for three months, as the lone investigator — who turned out to be the same one who tried to enforce Randolph’s earlier departure — interviewed Randolph at length. He then interviewed returning players, taking them out of class to conduct is inquiries. Some of the players said that when they said they had not noticed any questionable behavior by the coach and that they were strongly supporting him, the interview would be cut short.

Randolph’s decision to resign was inspired when he decided to go meet with members of the administration, from athletic director Shawn Roed, to the principal, and on up to the superintendent. He said he heard nothing resembling support for him, and, in fact, was told the administration would not be renewing his coaching contract. Parents of returning players immediately asked to meet Randolph to learn why he made his shocking decision.

Randolph had no idea about the level of support he had from his players, and their parents. When they asked him if, under the right circumstances, he would consider tearing up his resignation, Randolph told them that he was so overwhelmed by their support, that he’s been coaching East for 32 years, and he still loves to coach, and he would.

In answer to their questions, the administrators said they were powerless to do anything about the issue because Randolph had resigned and they had to honor it. They also said they would not release the results of the “investigation.” The players have asked for a second meeting to press their case. When the parents were to meet the administration on Tuesday afternoon, some of them invited some of the media to attend as well. But both a television reporter and a Reader reporter were stopped by John Maga, the new superintendent, from going into the suddenly-private meeting.

Some parents of players who quit in midseason have reportedly said they once got rid of a Peewee coach, and later a Bantam coach, and now they’ve gotten rid of “The Legend.” That, indeed, will be their legacy — unless an extremely impressive group of young hockey players get their wish.