Found? The Holy Grail of the Great Lakes 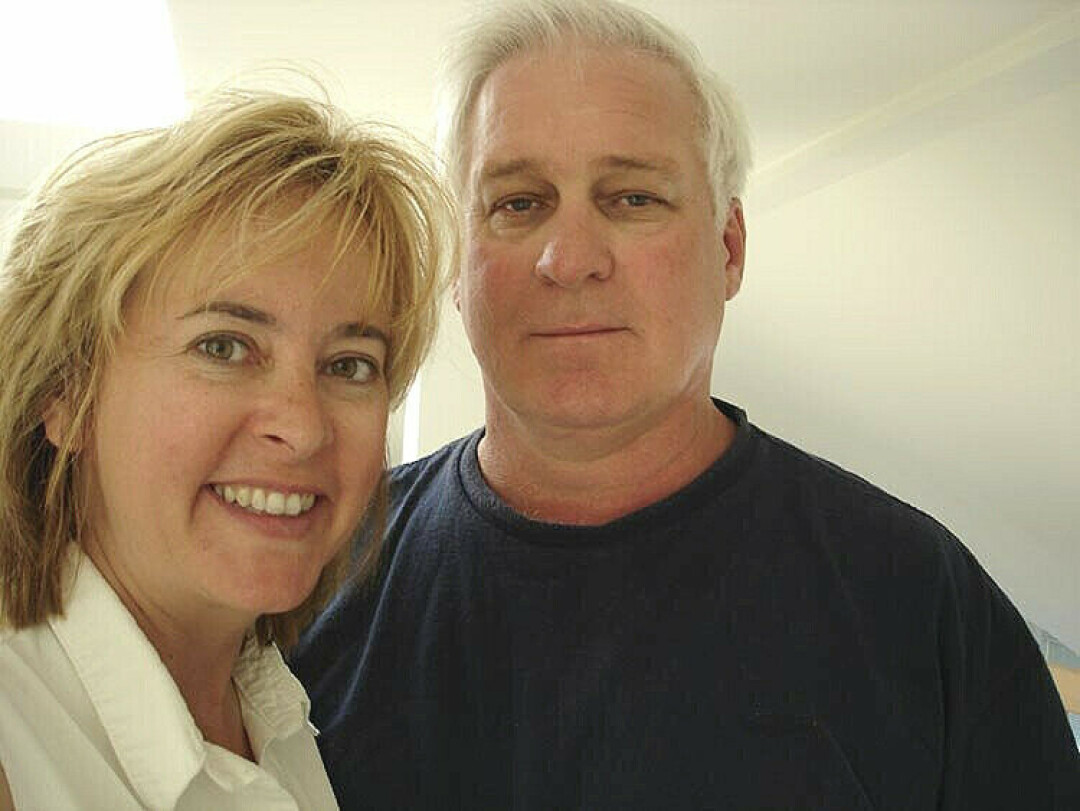 Steve Libert first became intrigued by the story of French explorer Robert LaSalle’s lost ship Le Griffon as an 8th grader in history class.
Most often described as a 45-ton barque, Le Griffon is considered the first full-sized sailing ship to ply the upper Great Lakes. LaSalle had the ship built on a creek near the Niagara River to accomplish his mission of finding a passage to China.
LeGriffon launched on Aug. 7, 1679, with LaSalle, Father Louis Hennepin and a crew of 32. The ship reached modern-day Door County in mid-September, landing on the south shore of either Rock or Washington Island.
On 18 Sept., Le Griffon started back for the Niagara River with 20,000 furs and six crew members. LaSalle remained behind to explore the head of Lake Michigan. Le Griffon was never seen again.
While a number of stories about the disappearance circulated – such as the crew was overpowered by hostile natives and the ship burned, or the crew took what they could of the furs and scuttled the ship. Or it could have hit a terrible storm.
The not knowing is what fueled Libert’s imagination in the 8th grade history class. But it didn’t end there. 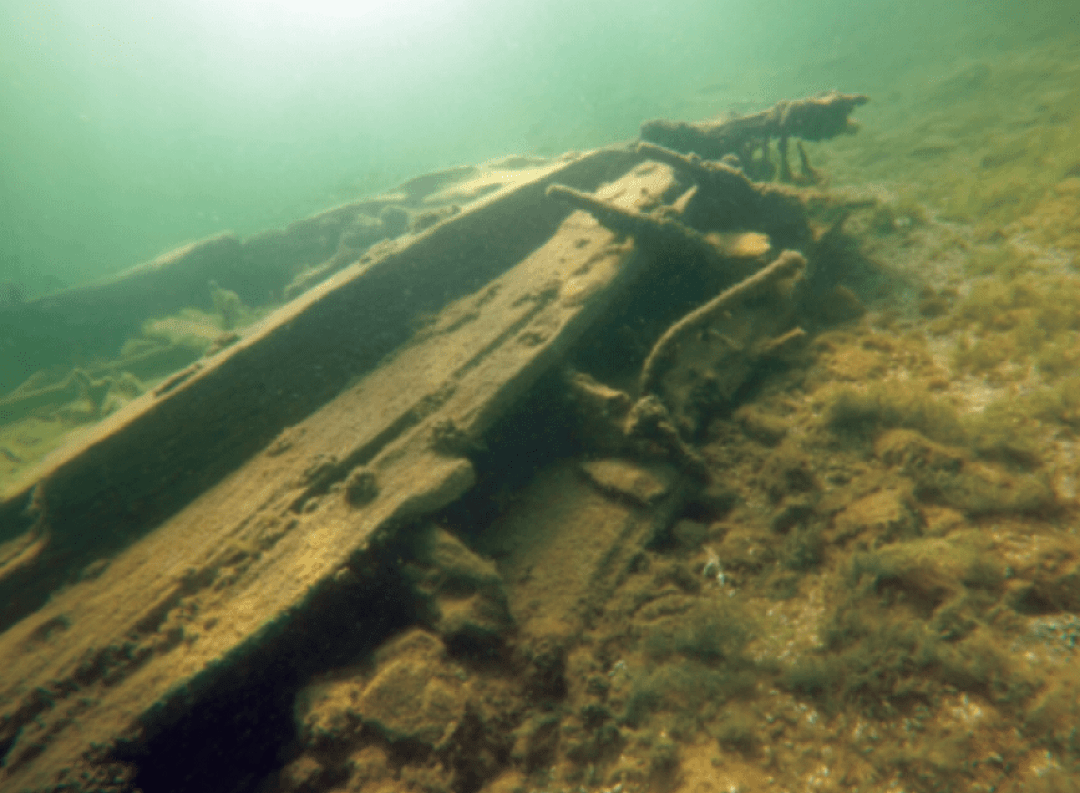 Steve and Kathie Libert believe this is the long-lost Le Griffon, which disappeared in 1679 bearing a load of furs across northern Lake Michigan.

Libert and his wife, Kathie, moved from Washington, D.C., to Charlevoix, Mich., after he retired as a government intelligence analyst for one of the alphabet soup agencies. They moved where they did so Libert could be closer to the “white whale” he has chased most of his adult life.
“We were in our 20s when we started this,” Libert said about his hunt for Le Griffon. He turned 67 in March. “The thought of finding this vessel was always on my mind.”
Now the Liberts say they have found LaSalle’s doomed vessel and last month released the story of their search in a book called Robert LaSalle’s Le Griffon and the Huron Islands.
Like La Salle in his determined effort to find a northwest passage to the Orient, Libert was single-minded in his pursuit of the greatest mystery on the Great Lakes.
La Salle had a history of losing vessels and making questionable decisions that did not sit well with his fellow adventurers, who finally murdered him after an epic failure at establishing a colony at the mouth of the Mississippi River.
That final mission ended in disaster not only for La Salle, but also for many of the 300-some adventurers, colonists and soldiers who set off from France on July 24, 1684. They never found the mouth of the Mississippi due to La Salle’s woeful miscalculations.
Three years into the expedition, on March 19, 1687, the 43-year-old expedition leader was killed by a crew member. What might have been an illustrious life in the service of Roi Soleil – the Sun King, Louis the XIV – ended with a shot to the head from a fed-up member of the crew he marooned in what we know as Texas, nowhere near the mouth of the Mississippi.
Of the four vessels that set sail on that ill-fated expedition, one was captured by Spanish privateers while still on the Atlantic, the storeship was lost at the mouth of Matagorda Bay, the naval escort Joly returned to France, and the final ship, the flagship barque La Belle, was wrecked in late 1686 during a squall off the Matagorda Peninsula. 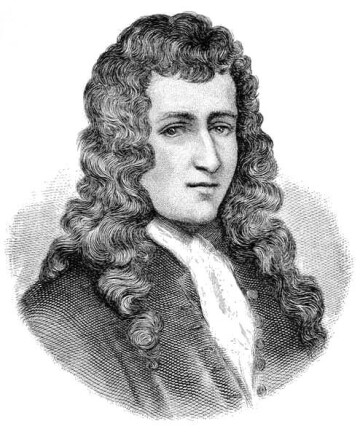 Fast forward 300 years, to 1995, when Texas archaeologists discover the remains of La Belle, thereby beginning a massive recovery project that reclaimed what remained of the hull and more than a million artifacts. The French government holds official title to the recovered hull and artifacts, but the Texas Historical Commission was granted control for 99 years, and many of the items are on display in Texas museums. The hull is on display at Bullock Texas State History Museum in Austin.

Without the context of the times and from this 21st century vantage point, it’s hard to judge La Salle. From here, he seems a very obstinate and unlucky man.
Despite not establishing the colony as intended, La Salle still laid claim in France’s name to the great tract of middle America that eventually went to the U.S. in the Louisiana Purchase.
Back in 2018 I talked to Libert for another newspaper after he had found what he believed was Le Griffon’s bowsprit. The State of Michigan claimed it was a stake once used by commercial fishermen, despite French archeologists agreeing with Libert that the piece of wood is a bowsprit.
Legal battles with the state have taken their toll on Libert, as have various medical issues. But he does not waiver in his belief that he has finally found Le Griffon in a spot he said is exactly where it should be according to the historical record.
And here is the historical record, from the pen of Father Hennepin:
“M. de la Salle, without asking any body’s advice, resolv’d to send back his Ship to Niagara, laden with Furrs and Skins to discharge his Debts; our Pilot and five Men with him were therefore sent back, and order’d to return with all imaginable speed, to join us toward the Southern Parts of the Lake, where we should stay for them among he Illinois. They sailed the 18th of September with a Westerly Wind, and fir’d a Gun to take their leave. Tho’ the Wind was favourable, it was never known what Course they steer’d, nor how they perish’d; for after all the Enquiries we have been able to make, we could never learn any thing else but the following Particulars.

“The Ship came to an Anchor to the North of the Lake of the Illinois, where she was seen by some Savages, who told us that they advised our Men to sail along the Coast, and not towards the middle of the Lake, because of the Sands that make the Navigation dangerous when there is any high Wind. Our Pilot, as I said before, was dissatisfy’d, and would steer as he pleas’d, without hearkining to the Advice of the Savages, who, generally speaking, have more Sense than the Europeans think at first;

but the Ship was hardly a league from the Coast, when it was toss’d up by a violent Storm in such a manner, that our Men were never heard of since; and it is suppos’d that the Ship struck upon a Sand, and was there bury’d.”