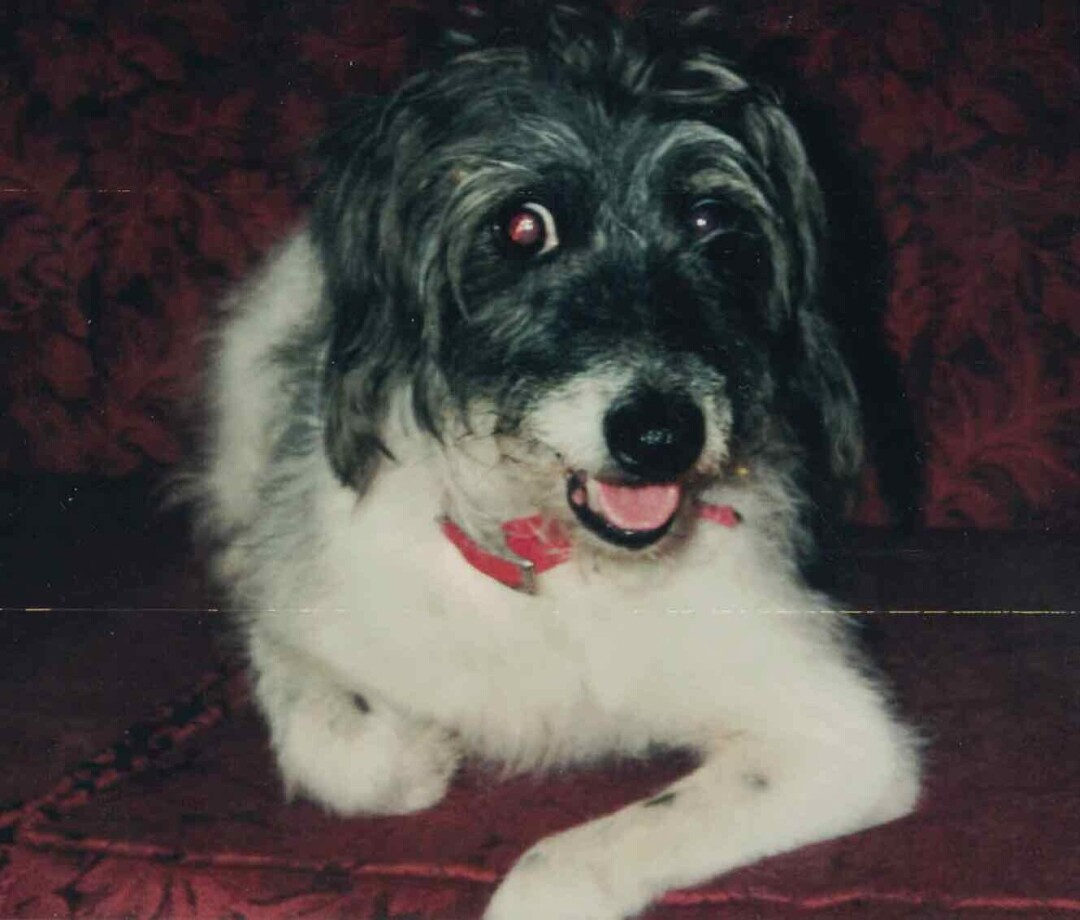 Fritz was rescued from a house with 40-some half-starved dogs.

Fritz was one of the most unusual animals to grace our house, because he was the only one we got that I knew was coming before he showed up in my living room. The reason I knew he was coming was that we had to pick him up in Duluth, so I was the designated driver.

My wife saw him on one of the local morning shows. He was one of the dogs Animal Allies recovered from a woman who was found to have 40 some half-starved dogs in her home. Fritz had been in a crate with his brother, full of excrement and skin and bones. If my memory serves me right, I think his brother didn’t survive. He was still very thin when we saw him, but he was cleaned up and a little nervous. They thought he was about 3 years old, and he may have spent his entire lifetime in that small crate.

Our only worry was how our alpha female would greet him. She was a small, not quite miniature Schnauzer, who tended to be a little bossy. Our other dogs at the time were Taco, a fairly large but happy-go-lucky mixed breed, and Mr. MaGoo, a Pekinese/Shih tsu mix. We didn’t think we would have anything to worry about those two. Taco was as mild-mannered as they come, and MaGoo was half Fritz’s size.

As it turned out, our female pretty much ignored him. We were right about Taco’s response, but not so much for MaGoo. When he discovered that Fritz was afraid of him, he became the neighborhood bully. He was a very small dog, so he didn’t have much chance to bully a dog that was bigger than him. I caught him in the bedroom where he had Fritz cornered. I had to scold MaGoo and pick up poor Fritz, who was shaking like a leaf.

As far as I know, that put a stop to the bullying, but from then on, Fritz spent a lot of time in my lap.
We were still at our old house then. The back yard was fully fenced in, but there were three gates, one on either side of the house, and one at the rear which led to a screen house complete with furniture, reading lamps, and a TV—a great place to relax and get away from the mosquitos. None of those gates were easily seen from the back door, which for some reason was the favored entry to the house. Consequently, a gate was too often left unlatched, to the great delight of Taco, who dearly loved to run around the neighborhood. If we saw him going, we would holler at him, but he would turn his head and give us a big smile, and then keep on going. It was pointless to chase him, he would keep going until he got tired or hungry.

Fritz was not an adventuresome dog, and he was afraid of cars, so if he got out he would hang around the front yard or come to the front door. Then one day in August, Fritz disappeared. When I got out of work, we drove around the neighborhood, afraid that we would find him on the side of the road. There was no sign of him. We called Friends of Animals, who ran the shelter, put up notices at the two local vet clinics, and asked everyone we knew to keep a lookout for him.

September came, and we had decided we would have to find a replacement for him, when we got a call from a woman at North Country Rides in Esko. She had been out horseback riding and saw a little black and white dog with a red collar trotting down Hanratty Road.

There was no possible way for Fritz to have gotten to Esko on his own. He would have had to cross a busy highway whichever way he could have gone, and he was scared to death of cars. Someone apparently dropped him off there, thinking it was a funny thing to do.

We drove around Hanratty Road and talked to several residents there, who hadn’t seen him, but promised to keep an eye out. One woman said she would leave a little extra dog food out, in case he came by. Two guys came out on their ATVs and helped us look. We called for him everywhere, but no luck.

It was getting to be October now, and I was afraid that winter or a coyote might beat us to him.
We continued to drive around those neighborhoods, and were getting pretty discouraged. Then it occurred to me: a lot of the local people had large dogs, that tended to be out in their yards during the day. Fritz was a frightened little dog, who would want to avoid trouble, so he was more likely to be traveling at night. So I started going out in the evenings.

Finally, my patience was rewarded — I caught sight of him in my headlights! I was so excited to see him, I stopped and jumped out of the van. I called to him, he turned and looked at me — and took off running away from me, up the road and into the darkness. That was unexpected. I thought first that he would come back, but he never did, and when I drove up the road, I couldn’t find him again. I was afraid then that he had been gone too long, and had forgotten me.

I drove home and told my wife that Fritz had broken my heart. When I described what had happened, she said “Did you turn off the van? You know he’s afraid of motors.” Of course, I’d been too excited to think of that.

A couple nights later, there was a thunderstorm brewing, and I knew Fritz was afraid of thunder. I drove out again and found him trotting down a different road. This time I shut the van off. I had taken a handful of those milk bones he loved as treats.

When I called to him, he looked at me, but he stayed where he was at first. I held out a milk bone, and he started for me cautiously. When he got to me and took the treat, I grabbed him and happily threw him in the front seat.

He smelled like a barn, so I knew he’d been sleeping with cattle. He talked to me all the way home — it sounded like he was describing everything he’d been through. Of course, he finished off the treats, too.
When we got home, I let him get a good drink of fresh water, then carried him upstairs and threw him in the bed. He curled up and stayed there the rest of the night.

When we moved to our new house, we were able to observe Fritz with the other dogs. It was obvious that he would like to play, but he didn’t know how. He had been robbed of his puppyhood, and so had never learned how to interact with other dogs. We did our best to give him a life as free of fear as possible. 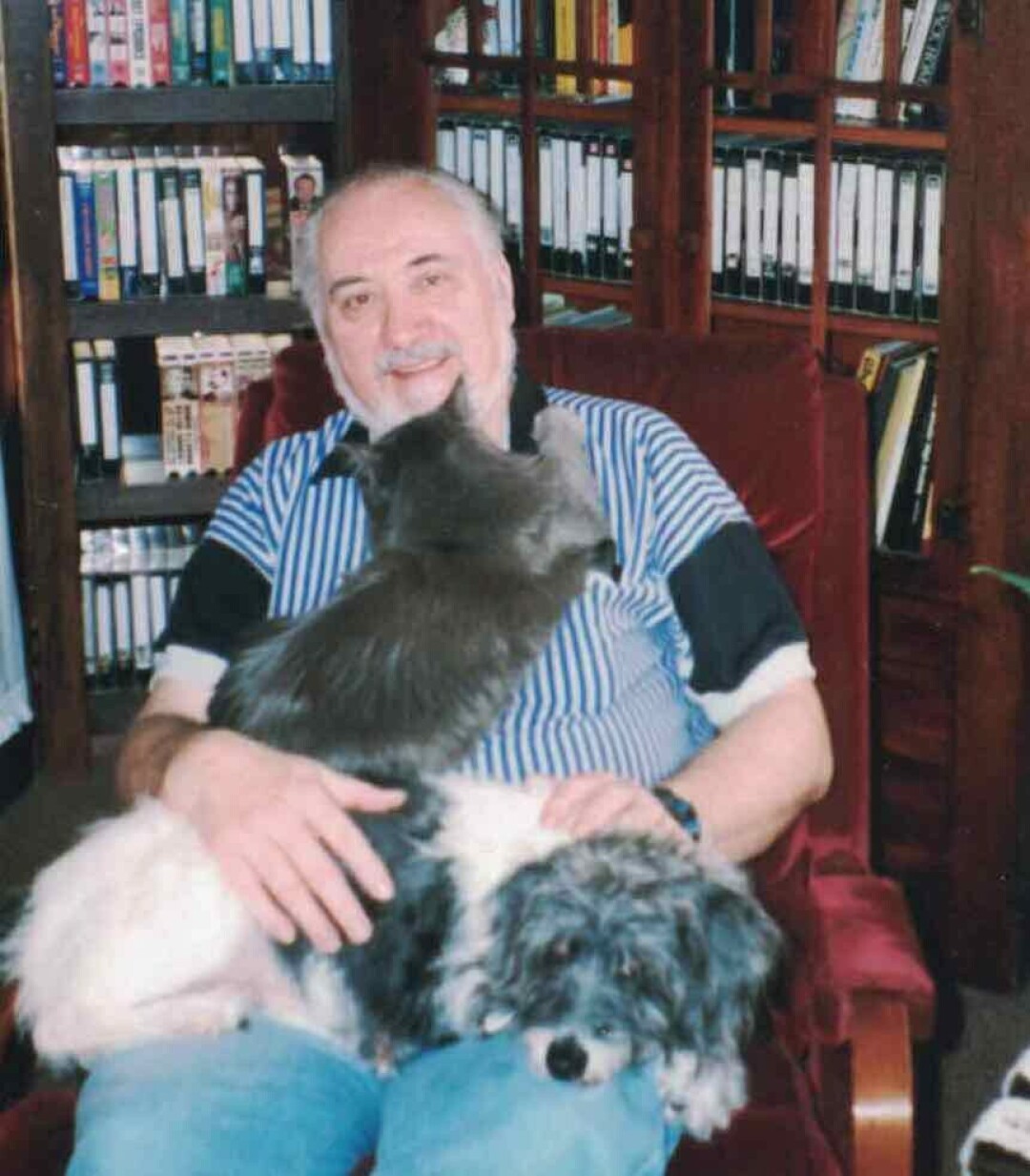 The author with lap animals.