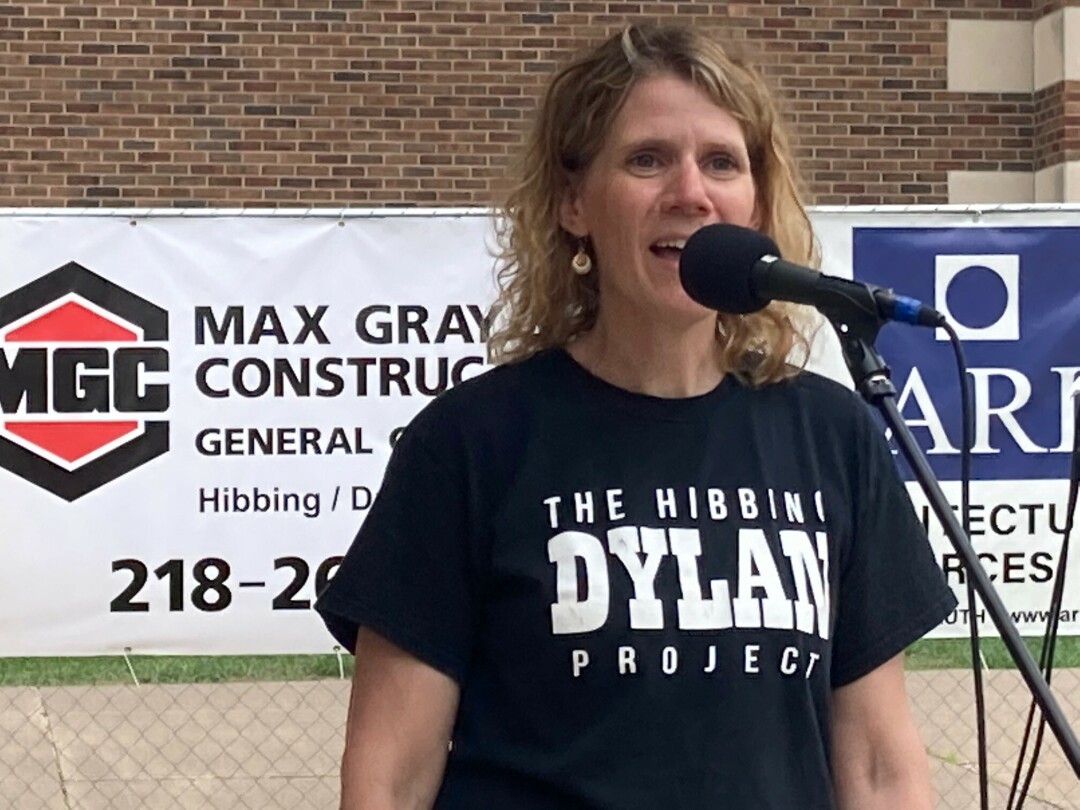 Katie Fredeen, Dylan Project Committee President, talked at the groundbreaking about the importance of community in making the Bob Dylan Project a reality, and why it’s important to recognize Hibbing High’s most famous graduate.

Even before the May 22 event took place, I knew the Dylan Project groundbreaking at Hibbing High School would be celebratory and solemn, arresting as one’s first listening to “Blowin’ in the Wind,” and wholly worth my wife and I driving three hours across our Northland to witness the ceremonial moment that marked the Dylan Project’s transition from “the drawing board” to its construction that is scheduled to be completed prior to the project’s Oct. 16 unveiling.

First, let’s un-muddy the clear waters surrounding the Hibbing Dylan Project. Don’t let anyone tell
you the project is a “memorial” to the 2016 Nobel Prize for Literature Winner Bob Dylan.

It is light years away from that. The Dylan Project, initiated four and one-half years ago by 10 community- and literary-minded Hibbing residents, was, from the project’s first days, a tribute to Mr. Dylan’s words and music, that, “forever young,” as he enters his 80th year, continues with as much verve and passion for addressing “the human condition” as when he first embarked on his writing, recording and performing quest 60 years ago.

Furthermore, the project and its location, at the front entrance to Hibbing High School, was envisioned as something more than a tribute to a Hibbing-reared, renowned songwriter, who “marched to the beat of his own drum,” who against the odds of America’s recording industry during post-World War II, who against, at times, fickle fans who bought tickets to his shows so they could boo his groundbreaking music, and who, at times against his own mind, mined blank pages until his songwriter’s voice struck the sole subsurface vein worth more than diamonds, gold, or any Lake Superior “laker” ship loaded with iron ore: the human heart.

So, to inspire today’s young adults, some of whom will become sung as well as unsung creative writers and musicians tomorrow, the Dylan Project imagined an eye-catching tribute, not strictly to visually underscore one man’s acclaimed body of work, but to inspire, through inscribed in stainless steel excerpts of some of Bob Dylan’s lyrics, and an open chair where a person can sit alone if he or she so chooses, can think thoughts privately or publicly in the open air, can read the thoughts of others, poetic or not, popular or not, and, if the visitor opts to, can play an instrument or sing a song.

As a silent architectural, artistic tribute the Dylan Project will roar, will harmonize with human interaction.

How did Katie Fredeen, President of the Dylan Project Committee, feel as she stepped before the microphone at a little after 1 pm last Saturday? 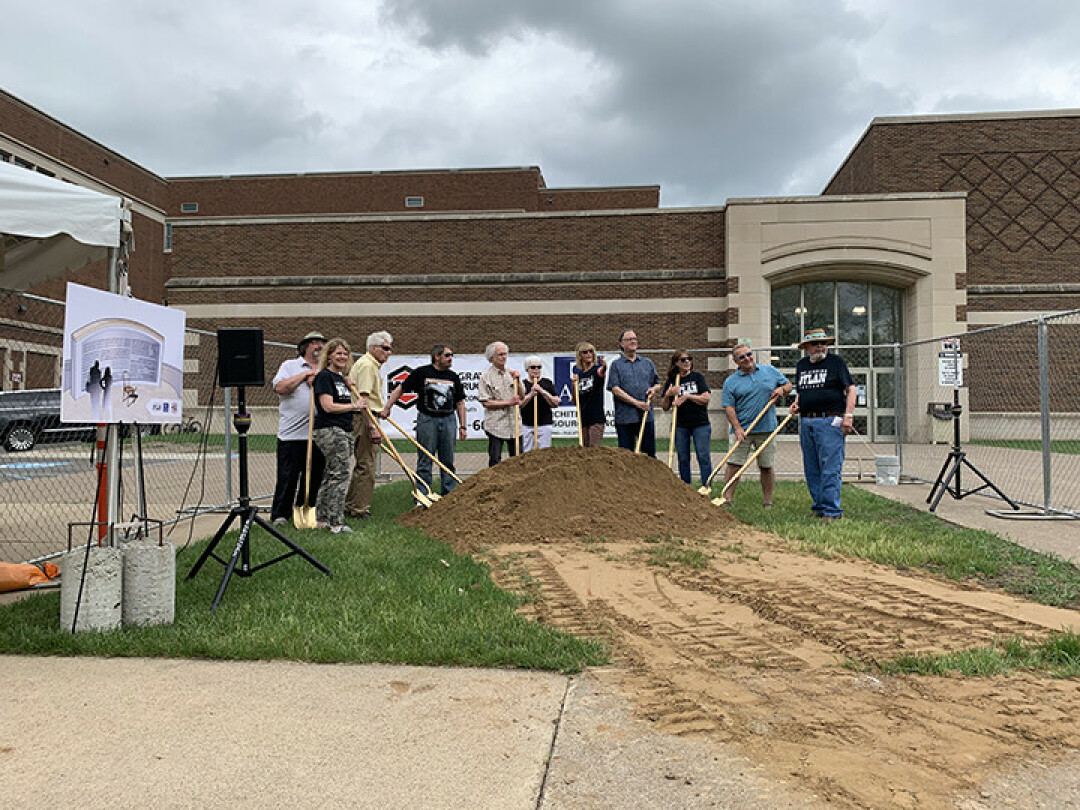 “There was a couple of times when I was listening to the guest musicians (Jamie Daniels, of “The Jack of Hearts” band; Hibbing High School member of the Class of 2021, Caroline Rue; and Jefferson and Megan Reynolds) that I asked myself, “Is this really happening? Has it been four and one-half years since we started working on this?”

No doubt, her fellow project committee members – Craig Hattam, Larry Furlong, Brian Simonson, Bill Pagel, Kathy Furlong, Marcia Grahek, Terry Rupar, Molly Johnsrud, Scott Allison and Dave Rian – after fundraising for so long, for working through concerns of the Hibbing School Board, applying for grants, receiving some and not garnering others, organizing Bingo Night to raise money, and, through it all, keeping their collective shoulders to the wheel until their shiny, gold-painted shovels broke ground on the project, felt the same way.

“Dylan’s music hits you at a different time and place. Today, we had a lot of out-of-town folks come here to celebrate this phase of the project with us. They experienced how all together, as a hard-working group, we helped raise community awareness about someone who grew up here. He walked two-and-one-half blocks from his home to his high school for four years. Later, he toured the world sharing his songs. He never forgot his Hibbing roots,” added Fredeen.

Craig Grau, a member of the Duluth Dylan Fest Committee, attended, as he said, “Because The Duluth Dylan Fest Committee has been working with The Hibbing Dylan group on the Year of Dylan. I thought the whole ceremony was good, but I was impressed with all the ‘approvals’ that were needed and how it was pointed out (in the ground breaking remarks) how kind Bob is and how he shares credit for his musical life.”

Grau went on to say, “ I think it is an encouragement for Hibbing High School students in music and the arts. I know a teacher who spent a week talking about Dylan years ago to her class at the grade school he attended in Duluth before he moved to Hibbing.”

After the groundbreaking many attendees took the short stroll over to Bob Dylan’s former Hibbing home. It was there that Nelson T. French shared, “I was drawn back to my hometown of Hibbing to gather with Hibbing Dylan Project leaders, friends and others to celebrate the historic ground breaking of a fabulous work of art designed to recognize the creative spirit that Mr. Dylan’s work represents.

“I, too, was born in Duluth and raised in Hibbing and for many years have been moved by Mr. Dylan’s writings and song – I guess you could say that I feel a kinship of sorts with him.

His songs reflect the true nature of the bard, troubadour, and traditional folk roots in his approach to connecting the past to the present and to the future in his timeless words and music.

“In his songs and words there is a certain truth and connection to the human condition, something that resonates with many people, thus, he is an important figure in music and poetic history.”

Jamie Daniels, leader of “The Jack of Hearts Band,” explained why he attended the ceremony, and played and sang several well-known Dylan songs that opened the event.

“As it turns out, it was pure serendipity! I happened to be in Minnesota for a family wedding over the weekend of the groundbreaking ceremony, and on a whim I contacted the folks at the Hibbing Dylan Project, figuring that there could be some gig opportunities for Dylan’s birthday weekend.

“They got back to me and said they would love to have me perform at the ceremony, and I was more than happy to oblige. It was an honor. It was really great to meet a lot of folks from Hibbing that came out to witness the ceremony. I got the chance to converse with many of them, a few of whom actually graduated in Dylan’s class of ‘59.

“It was a real treat to hear their stories. It was also great to see just how much time and dedication the folks at The Hibbing Dylan Project put into this special commemoration. It’s obvious how much love the town of Hibbing has for its favorite son.”

A crowd gathers for the event.