The WILD eke out Game 1 win! 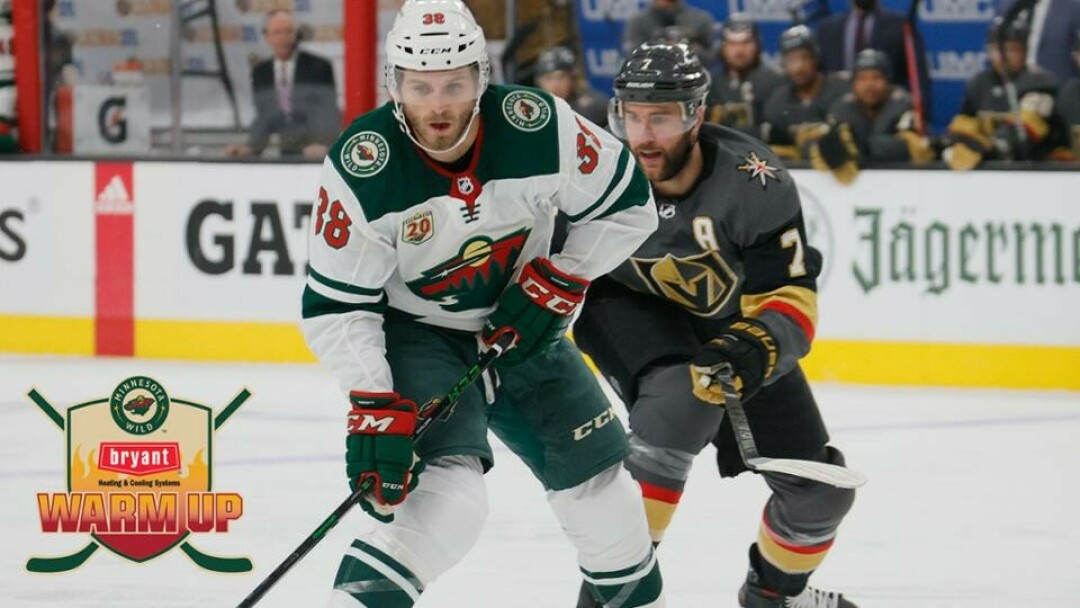 LAKESIDE – Before diving into this afternoon’s epic Minnesota WILD Game one Stanley Cup OT victory over the Vegas Golden Knights, I must offer an explanation. In last week’s World Wide Duluth Reader, I had the Wild meeting the Colorado Avalanche in the tourney’s first round.
At the time, with a publishing deadline awaiting, this would have been the matchup the WILD would have faced. But with credit to the Avs, one of their remaining tilts was against the VGK, and they won that contest in regulation by a 2-1 score.
That helped the Avs into first place in the West division and earned them the President’s trophy as the best NHL regular-season team. At 82 points each, the Avs won it on a tiebreaker. So...
The Wild lost their opportunity at second place in the division and home ice in the first round by going to STL to face the Blues, whereby they put up a pretty poor two-game performance ending any home ice dreams.
It wasn’t pleasant. (4-0 & 7-3 losses) Out of six periods played, the Wild won one of them. In fact, I feel that they played better in the shutout loss than they did the following evening. And with the playoffs right around the corner, that was the last thing I wanted to see from this club.
The team returned to St. Paul, put the two games behind them, and prepared for the VGK series. In the lead-up to the series, few people in the hockey world gave the WILD much chance to win it.
That’s OK, I fully understand. When Vegas is entirely “on” their game, they are likely better than the WILD are at this point.
But some of the opinions were downright disrespectful.
My son William was quite worked up on Saturday when he told me of a Canadian television commentator who was blowing past both the WILD and the Blues as he was already previewing a second-round matchup between the VGK and the Avs.
That is precisely what I am alluding to on the disrespect issue. This person could very well be wrong on the outcome of either series, and I find it unprofessional.
We often hear of Minnesota pro sports getting the short end of the stick from national media, be they domestic or Canadian.
On this day, I have been getting ample proof. But unlike my son, I’m only shaking my head.
Let’s examine this though. If you have been a long-suffering Minnesota sports fan, you know what I am speaking of.
After the WILD were victorious Sunday, the NHL’s three stars were Wild netminder Cam Talbot (42 saves on 42 SA), then ahead of him was VGK goalie Marc-Andre Fleury (29 saves on 30 SA, & the loss), and then the number one star was the WILD’s Joel Eriksson Ek who got the lone goal of the tilt and the GWG at that.

Now don’t get me wrong. I am a huge MAF fan. I love this guy. He is not only one of the best goaltenders of all time, a three-time Cup winner, the best teammate like, ever, and a first-ballot HOFer; he is an EVEN better human. You can’t not be a fan of his.
But Talbo stopped 19 shots to his 5 in the first frame. Talbo had 42 saves to his 29. Talbo had the shutout, and..... the win, and Fleury did not!
Marc-Andre made some five-alarm saves, to be sure. But Talbo?
The WILD were toast without Talbo’s efforts in the first frame. That is a foregone conclusion for me.
But in the majority of the postgame talk I heard, there was nary a mention of the WILD and of what they had just accomplished in Sin City. They just pulled off the NHL equivalent of a Brinks truck heist.
All I could do was laugh. I mean, what was I going to do? I’m a full bore Minnesotan. I’ve been conditioned.
The theme continued throughout the broadcast of the evening game between the Panthers and Lightning to ruffle me even more.
I ended up turning the sound way down.
Are the WILD “in the driver’s seat”? They aren’t.
But the old theory in the SC playoff was that if you began the tourney on the road and earned a split, you just increased your chances at a series win immensely.
I may as well add to the fray the old statement of “it’s not a series until someone loses a home game.” I guess we have a series now, and right off the bat too.
Can the club duplicate this afternoon’s win come Tuesday eve?
That would be a considerable challenge. But do not underestimate the WILD’s defensive game. It gets a lot of respect around the league, and it should.
I thought that the way the team won today was the way they were going to have to play in order to win. Play the hardest version of defense that you can and wait for your chance to pounce on offense.
Eriksson Ek got lucky when his shot deflected off Alec Martinez’s skate and through Fleury’s five-hole. But this team worked for that chance for three-plus periods today.
I was worried about the way they played in the handful of games leading up to this tournament. But I saw the VGK play a few times as well, and I didn’t feel they were playing their best either.
The WILD was 4-3 in May before today’s game. The VGK was 5-2. At least two of the WILD losses cost them the chance at second place. And one loss likely cost Vegas their Presidents Cup and home ice throughout the entire tournament.
Who says the regular season doesn’t count for much?
If the WILD wins G2 before heading home to St. Paul, they will earn themselves a huge advantage, which would go a long way towards a series win.
This team has the demeanor to do this.
And BTW, Kaprizov and Fiala haven’t kicked in yet. Just sayin’. PEACE
AROUND THE NHL: On Monday night BOS & WAS will play G2 with the Caps holding a 1-0 series ad. Can the Bruins even the series before heading home? CAR & NSH will play G1 of their series. I feel CAR is the better team, but I can’t discount the Preds. Then STL & COL will meet in their G1.
I give the Avs a slight edge, but a Blues series win wouldn’t surprise me.
Tuesday eve PIT & NYI will meet in G2 with the Isles having a 1-0 series ad. They won in OT on Sunday. Can they take this series? Yes.
The battle of FLA resumes with the Bolts holding a 1-0 ad. And then the WILD-VGK G2. WIN & EDM begin on Wednesday eve, and for reasons unknown to me, TOR versus MON finally starts on Thursday night, a full five days after the tourney officially began. Who wins there?
You’d have to say Leafs do on paper. MON is quite happy the games aren’t played on paper!
OVER & OUT!