A wound in the brain 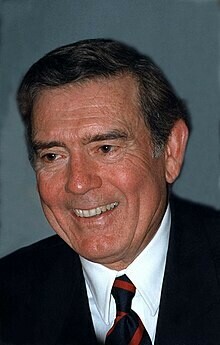 Dan Rather at 89 has been directly involved with the history of the United-now-Divided United States of America for one-third of its life.

He spoke truth to power at all levels of government. He asked penetrating questions to dog catchers and presidents alike. He took on the paranoid Tricky Dick Nixon with both humor and wrath – while increasing Nixon’s paranoia.

Dan got into trouble when “Big Daddy” President George H. W. Bush wrangled a spot in the Texas Air National Guard to keep his often errant son George W. out of Vietnam. He spent his tour patrolling the Rio Grande River with his F-102 keeping the Cong from invading Dallas. “Shrub,” which Texas columnist Mollie Ivins had labeled him affectionately, disappeared for periods of time from his Air Guard duties.

Rather’s staff investigated his absences and made a 60 Minutes story out of it. Politics and CBS reared its outraged head and accused Rather of shading details. Charges were made about misinterpreting records and other file stuff. It resulted in Rather’s resignation as CBS news anchor.

Funny thing. We have never really learned where Shrub was in all that missed time. Evidently his military record is very hard to find in the Pentagon.

Dan has written an important column titled “Maybe Not Your Average Joe,” a reference to President Biden and the administration’s priorities. It’s a great summary of where we are today. I’m picking out just one paragraph to convince you to read his column:

“We are living through a time that is unprecedented in more ways than we can fully fathom. It is human nature to focus on the extremes, the dangers lurking on the horizons of our mental vision. The pandemic naturally looms large, and so does the January 6 insurrection, with all that reflects about the very real threats to our democratic order. We are still trying to assess the damage wrought by the previous administration and its twice-impeached leader. The news on climate change grows increasingly dire. And our fitful confrontations with racial injustice are powered by deep social, economic, and political currents that stretch back to before the founding of the nation. There is so much we need to rebuild and rethink.”

Is this an accurate description of us?

I have quite a few favorite poets. Robinson Jeffers is my favorite nature poet. Read “Hurt Hawks” first. It’s an intriguing poem about a hawk with a broken wing. His following stanza in another poem about Homo sapiens describes why the world is in constant trouble from the dominating species:

“Never blame the man: his hard-pressed ancestors formed him:
The other anthropoid apes were safe in the great southern rain-forest
And hardly changed in a million years, but the race of man was made
By shock and agony….a wound was made in the brain
When life became too hard, and has never healed
It is there that they learned trembling religion and blood sacrifice
It is there that they learned to butcher beasts and to slaughter men
And hate the world.”

As Nixon would say, “it’s perfectly clear” that Donald Trump is a malignant narcissist. At least 27 American mental health professionals and psychiatrists have declared that he has this serious wound in the brain, and a combination of sociopathic and psychopathic tendencies. In other words, his wound in the brain is that he loves only himself, has no empathetic genes, demands total loyalty but gives none, loves gold, and is not a good speller. He has an insatiable need for spotlights, TV cameras, trophy women, crotches and social media. No need to go further.

He took advantage of race, religion, guns, and economic inequality created by plutocrats to get elected to, at that time, the most powerful position in the world. And then he created an insurrection by big lies that almost succeeded but is still stalking the mean streets of a divided country, creating shock, disgust, and agony.

Is Biden capable of being a transformational president?

Dan Rather says Joe Biden means business: “He is weaving a narrative where dramatic action on racial justice, economic inequality, education, immigration, infrastructure, the social safety net and climate change are all interconnected.”

But this is not really Joe Biden speaking.

As a politician for more than 50 years, Joe Biden served as a gabby senator bobbing and weaving around the political ring with one object in mind: staying around for 15 rounds so he would be re-elected.
Joe is just smart enough to see a path to winning. Policy be damned. He was pro-life until he realized he wouldn’t be elected by liberals unless he was pro-choice. That’s OK, but principles are principles, too.

Actually, the Democratic platform the Biden administration is proposing to the voters is composed of policies Senator Bernie Sanders has been pushing since he was mayor of Burlington, Vermont, and through all of his senatorial and presidential campaigns ending in 2020.

Biden tried to bob and weave in the middle of the road and was relatively quiet about the major issues. Even the Wall Street Journal has used “President Joe Sanders” in a headline.

In today’s politics, candidates who stay in the middle of the road are roadkill. Biden’s job for the next two years is to convince half of the 95 million eligible voters who didn’t vote in 2020 to vote for Democrats in 2022 because of Bernie’s policies.

Is there any chance the wound in the brain will heal?

I see Donald Trump, the owner of the huge “Big Lie” and more than 30,000 other big ones, has started his 2024 campaign for president in The Villages, a restricted plus-55 Florida retirement center of about 125,000 refugees from New York and other northern climes.

My oldest brother lived in Gainesville and then Ocala for about 15 years after his retirement, so Corky and I have spent a lot of time RVing in Florida.

About 15 years ago when The Villages had about 20,000 we visited friends there. The “highlight” of our days there was an expansive contest to see which resident had the most expensive golf cart. As both of us were raised without a pot or window (that is, to piss in or look out of, in case you are not familiar with the phrase), we lost interest in that community on the quick. It has been developed to interest Republicans because they have the cash to buy homes, so now about 80% of residents have transformed to Trumplicans.

Therefore, it’s a perfect spot for Trump to start his campaign of revenge, vindication, ruthlessness and malevolent hate. He had two perfect zombies represent his personal qualities and “America First” platform in a rally. Rep. Marjorie Taylor Greene (R-Ga.), a QAnon believer who would probably sacrifice both breasts to fight for his version of Trump truth, opened the rally with a demand: “Tell me who’s your president!!!” Without a pause or doubt, the zombies shouted back: “Donald Trump!!”

So much for elections – but I guess he is the president of the Republican States of America instead of Biden. Greene ran for office only because Trump was president, but Congress is a “dirty rotten job, I’ll tell you that much.” She believes some mass shootings have been staged and Democrats should be assassinated. She doesn’t seem to be the-girl-next-door type.

Rep. Matt Gaetz (R-Fla.), in deep trouble like Trump with sexy girls, nude pictures, bad company, and allegedly paying a 17-year-old girl to cross state lines and perform numerous sex acts, stood by The Donald by attacking a Republican who supported him with a 90% voting record: “If Liz Cheney could even find Wyoming on a map and get there, she would find a lot of very angry cowboys!”

He claimed the Second Amendment is not about hunting or sport: “We have a right to bear arms in this country and we will use it! The Second Amendment is about maintaining within the citizenry the ability to maintain an armed rebellion against the tyrannical government. People may not like that. It might not be politically correct. But that is the truth.”

The wounds in the brains in these two will never heal. Gee, Matt: Why did the NRA spend hundreds of thousands of dollars sending CEO Wayne Pierre and his wife to Africa to shoot a couple of elephants?

After that blast, both zombies called their audience “proud American patriots” while attacking Democrats for “wokeness” (whatever that is), the media for printing and spreading “fake news,” and RINOs (that is, “Republicans in name only”).

What a rally! I almost felt sorry for Liz for approximately 2.1 seconds, but then I started to remember the Cheney household record.

Why does Liz oppose same-sex marriage while her sister is a lesbian?

Christmas dinner at the Dick Cheneys must be interesting. Liz and Mary spent a lot of time together early working on their dad’s various campaigns, but now they are estranged because Mary is involved in a same-sex marriage and has two children, the last time I counted.

Father and mother have accepted Mary’s “condition.” Liz hasn’t. Could it be politics?

Dick Cheney was always too conservative, too chickenshit, and too greedy for me.

When he was eligible for the Vietnam War he quickly got married and ended up getting five deferments that outlasted the war. His reasoning: he “had better things to do.”

Well, I guess he did, but so did 58,220 other Americans, but they ended up with their names on the Vietnam War Memorial in D.C.

After 9/11 he was instrumental in establishing Guantanamo Bay as a good place to torture prisoners from Afghanistan and other hot spots. He got attorneys to approve “enhanced interrogation techniques,” including illegal waterboarding, sleep deprivation, beatings, heat and cold exposure, and other tortures that “might expose detainees to death.”

No one in the history of the world has ever proven you get truth when you torture. Dick said water wasn’t damaging.

When Dick was co-president with Dubya during Bush’s first term, he harassed our CIA until they agreed that Saddam had many weapons of mass destruction (WMD) so we should shock and awe them with military power – and relieve them of their oil fields.

He said the Iraqis, because of decades of ill treatment by the murderous Saddam, would place flowers in the muzzles of our rifles when we invaded. He was wrong. They placed rifle grenades in the muzzles of their rifles and blasted the hell out of us.

His daughter Liz voted with another tyrant 90% of the time and rejected her own sister. She shouldn’t be in politics at all. She’s too much like her father and her Great Leader Trump. Their wounds in the brain will never heal.

P.S. To President Joe Biden: So Joe Manchin wants to play hardball? Whisper this in his ear: “Vote with Democrats or West Virginia will not see a federal dollar until you retire.”

That’s what LBJ would do.