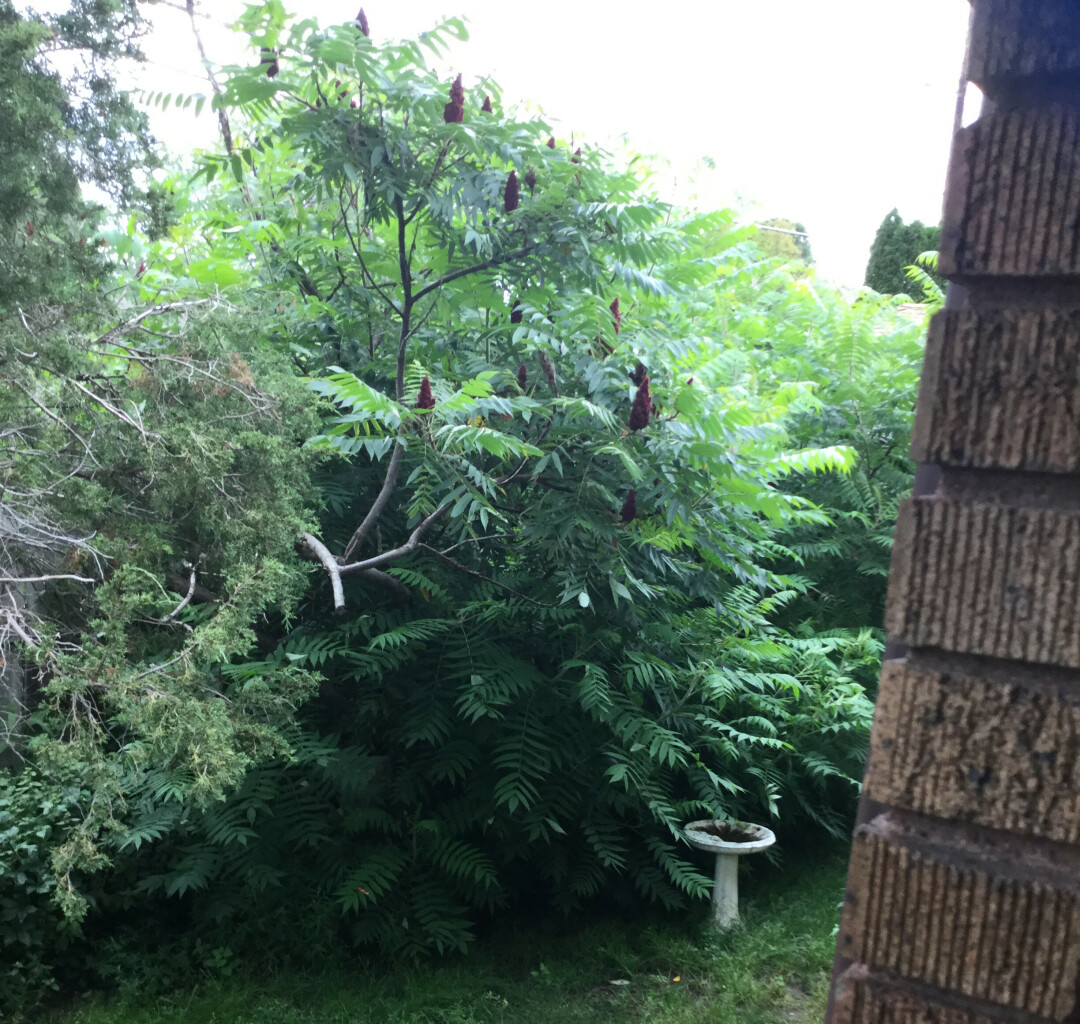 When I look out my dining room window in the summertime, it looks like a jungle scene.

The north side of my house has been a problem area from the beginning. After fencing in the yard by the back door for a dog run, I was left with a rather narrow strip of useless lawn which was a pain to mow, sloping from my fence to the road.

I had a small garage attached to the house, but all my tools were in there when we first moved, so I built a large, detached garage with workshop space in back and put a horseshoe drive in front of it. That left a short stretch of that north lawn between the ends of the driveway. I put a low retaining wall of landscape logs around the honeysuckle bushes on that stretch and flattened the hill, replacing the grass as much as I could, planting a couple of small trees and some flowers. On the long part I planted a row of field roses.

The roses were just starting to bloom when the city decided to upgrade the avenue, which involved tearing up the whole strip of land including my two small trees, the flowers and all the roses. The gas line moved from under the street to under my lawn, which meant I couldn’t plant any trees with large root systems that could disturb the gas line. After everything was done, they sodded the strip. (The city doesn’t replace plantings they ruin.) I tried to give the sod away, but was told I couldn’t do that. It was still at a slant.

I was a little miffed at getting back a lawn that I had worked so hard to eliminate. I continued to have the grass between the driveways mowed, but then I got some staghorn sumac and elderberry plants from the county and planted them in the long stretch. Highbush cranberries went on both sides of the house, and a nannyberry tree went inside the dog fence. The sumac took off, as did one elderberry. The sumac even went under my dog fence and grew out. My dogs seemed to enjoy exploring around them, so I let them grow. I enjoy them, too. When I look out my dining room window in the summertime, it looks like a jungle scene. Lots of little birds like to peck at the stag horns, and woodpeckers pick around the branches. The first robins enjoy them, and I have even seen a couple of crows there.

When I bought the house, there was a lot of European buckthorn which had been used for hedges. I had some growing near the dog fence as well as some locust tree shoots. I had dealt with the locusts before, and hated them. This is the northern edge of their range, so they are the last to leaf out in the spring, and the first to drop leaves in the fall. In the meantime, they continually drop twigs and branches all summer. Cut one down and they will quickly send up shoots that will grow to trees if you let them.

I wish I wouldn’t have to see
The mess that is the locust tree.
With thorns and leaves and broken branches
Coming down like avalanches
This tree should never, ever grow here
Temperatures are much too low here.
Cut one down, there comes back ten
To drop crap on your lawn again.

I asked my handyman to go through the area and cut out everything with thorns. I thought this was clear enough, and that would eliminate the buckthorn and the locust shoots. I let him go to work, and when I checked on it, the buckthorn and locust shoots were absent, but my elderberry was also inexplicably gone. There are no thorns on the elderberry, and it was just starting to blossom. So much for trying to get by with general instructions to people with private minds.

I had other people cut down the rest of the buckthorn around my property. Some of the large ones were dug out by the roots, others were removed with a stump grinder if they couldn’t be reached any other way. In their place I planted loads of chokecherry bushes.

Then the county Soil and Water Conservation District started selling pollinator and Monarch butterfly kits: native plants that attract bees and Monarch butterflies. I bought two of those kits and planted them wherever I could find the space. At the same time, I got a sign from the Xerxes Society proclaiming that stretch a Pollinator Habitat, and stopped any mowing on the north side. I am letting the sumac branches lie when they fall. I am told that the rusty patched bumblebee (an endangered species) likes a messy area for their nests.

And now I’m gloating a little bit, thinking I am getting back at the city of Cloquet for my unwanted sod and past indignities, such as the time I went to the hospital for a couple of weeks, and returned in time to get a letter from the city, telling me to mow your lawn, you lazy bum, or we will send a crew to do it for you at no small expense.

I had three hazelnut bushes (two varieties) planted where I had had the two small trees that the city had torn out. Only one survived, but after I quit mowing that piece of lawn, I counted five different wildflowers that came up there from the old sod, including purple prairie clover, one of the species they are trying to recover.

I had planted a couple boulevard trees in front of the house before I started this — I know one is a Japanese elm. The other I was told was a large leaf linden or a basswood. Whatever it is, it has bunches of very small blossoms, and when it is blossoming, it is loaded with bees. So I think I made the right move there. I wonder if the city will complain now if I quit mowing the boulevard?