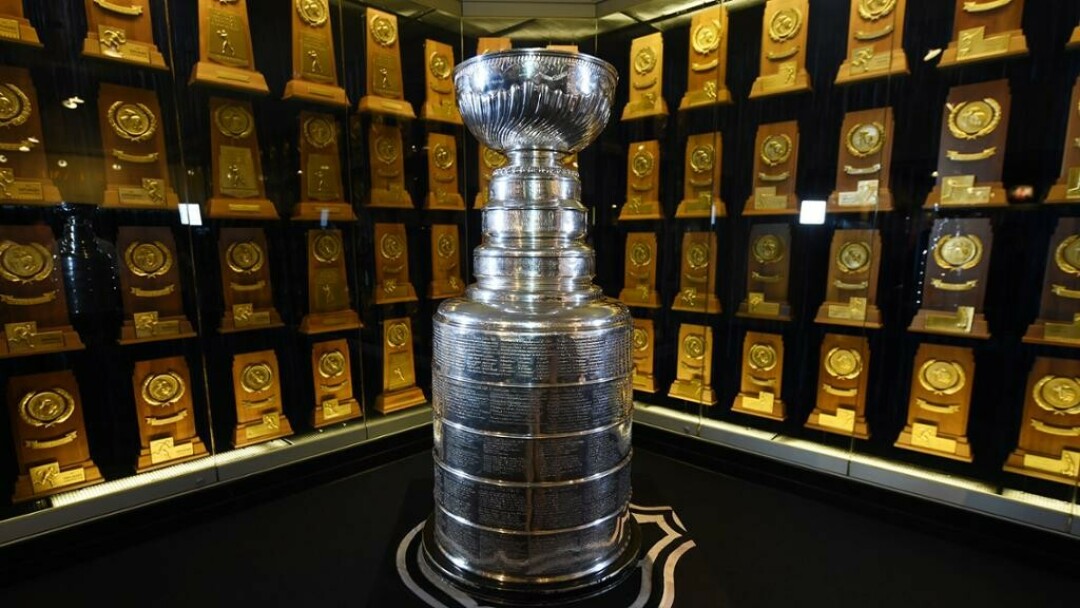 The most famous trophy in the world. (Photo: NHL)

WEST 7TH STREET Well, here we go! One of the best hockey tourneys of the year is about to commence, and I can’t wait. I guess I’m closing in on seeing about 60 Stanley Cups at this point, and I appreciate each one more by the season. This year could be particularly interesting due to the elevated chances of the Minnesota WILD. That estimation is, in my perspective, not that of any “expert” analysts. The best I am seeing from any person in that lofty status is that the boys from St. Paul will be a “tough out.” Gee, thanks. I can only hope that it didn’t pain you to grant the WILD such faint praise.

The reality is that with some solid play and a bit of puck luck, the WILD could win a round or two. Of course, I could be wrong, but this is the best edition of this club in many years, if not in its 20-year history. And if they did take a round or two, I wouldn’t view it as any fluke, but the accomplishment of a team that now features offensive capabilities it has not had in years past. There are some variables to consider as the tourney unfolds. There is still the matter of quarantine protocols in Canada to be observed. That leads to the question of what happens if a Canadian club advances to the SC Final? I’m not sure if that can happen or if the league has a contingency plan to accommodate that possibility. We’ll have to see how that plays out. So, without further ado, let’s look at Round One!

*NORTH series subject to change.
In the ALL-CANADA (North) division, TOR versus MON. This historic rivalry goes back decades and will be their first playoff meeting since 1979. But the Leafs have owned the Habs this season, going 7-2-0-1 against them in the regular season. MON should regain the services of G Carey Price and the pesky Brendan Gallagher, but it may be to no avail. Even with a wait-and-see attitude on the Leaf’s goalie play, the Leafs probably advance here in six.

EDM versus WPG; at this point, the Jets are limping into the playoffs. (2-8 in L10) I see them play frequently, and they have the appearance of a club that is beaten up. Yup, hockey can do that to you. EDM has gone 7-2 against the Jets this season, and there’s no reason to see any change in that dominance. EDM in five.

In the CENTRAL, CAR versus NASH, the regular-season history totally favors the Canes. (6-1) However, the Preds seem to have transformed themselves a bit on the go. I didn’t see them anywhere near a playoff spot before the regular season, yet here they are. They do not match up well with the Canes, and this one could be over in five tilts.

*FLA/TAM game 5/10 will determine HOME ICE in this series.
This all-Florida series could be of interest. The defending Cup champ Tampa Bay against the improved Florida Panthers will be a must-see scenario. Both clubs feature high-level Russian netminders (Vasilevsky vs. Bobrovsky) with a coaching matchup for the ages with Cooper vs. Quenneville. The regular season stands at 4-2-0-1 for FLA, and these two will play tomorrow eve in a game that could determine home ice. I’m taking FLA in 6 games.

*EAST series subject to change.
In the EAST, PIT versus NYI, there were three good clubs in this division that I thought might not even make the tourney this year. PIT was one of them. The other two, BOS and WAS, are in too. As far as the Pens/Isles series goes, PIT has the regular season ad 6-2-0-0. Will that continue in the playoffs? PIT is hot right now, and the NYI are not. Pens in six.

WAS versus BOS; the Caps lead this series 4-3 this year. Lo and behold, they play in each other’s finale on Tuesday eve @ WAS. The Bruins will play the night before at NYI. The best BOS could do is a tie in points, and WAS would win that with the ROW tiebreaker. The Caps will likely get home ice. I believe that BOS is the better club overall though. BOS in six.

In the WEST, the VGK versus STL. Vegas has owned the regular-season series between these clubs. (6-1-0-1) But that was before the Blues began to get players off of the LTI and COVID lists. I still believe the Knights to have the better team, but this could be one of the more contested series of the first round. Vegas has two number one netminders, and the Note has the up and down Jordan Binnington. In the end, I see Vegas winning it in seven games.

*HOME ICE has not been decided for the COL/MIN series yet.
The WILD versus COL; oh boy, this will be tough. The Avs had a 5-2-0-1 record against the WILD this season, but will that have any bearing on this series? In their last meeting of the regular season, the WILD put an 8-3 beatdown on the Avs. It must be noted, though, that COL had players missing from injuries. Still, the WILD dominated that game, and that has to be a confidence builder. I see the goaltending match-up (Talbot vs. Grubauer) with a very slight edge for the WILD. Without Erik Johnson in the Av lineup, I give the Wild the nod on the defensive side, and I feel that even though the Avs may have an edge with their top two lines, I believe the WILD holds the advantage with their third and fourth lines. And most of these series are not won by your top players doing what we expect them to do but by some of your role players stepping up and having superior performances.

If the Eriksson Ek-Foligno-Greenway line comes up big, this will spell trouble for the Avs. A potential challenge for the WILD could be if the Power Play reverted to early season form when it struggled. Special teams could decide this series when it gets down to it. Perhaps I’m jaded here, and I’m trying my best to negate my personal and emotional outlook on this series, but I feel like the WILD could very much be up for this series. I think Coach Evason gets this club motivated and keeps them on an even enough keel to win. I’m going to be running through hades here with gasoline pants on with this pick, but give me the WILD in six games.

ARE THE WILD in the running for a Cup win? Most likely not (3% chance), but I feel that if they were to win a round or two this year, it would prove that they have improved their path to do so in the not-so-distant future. With young players like Kaprizov and Fiala in the mix, they have potential game-breakers they haven’t had in past playoff campaigns. I can safely say this; it’s been a while since I have looked forward to a Cup tournament the way I am looking forward to this one! LET’S GO WILD! PEACE