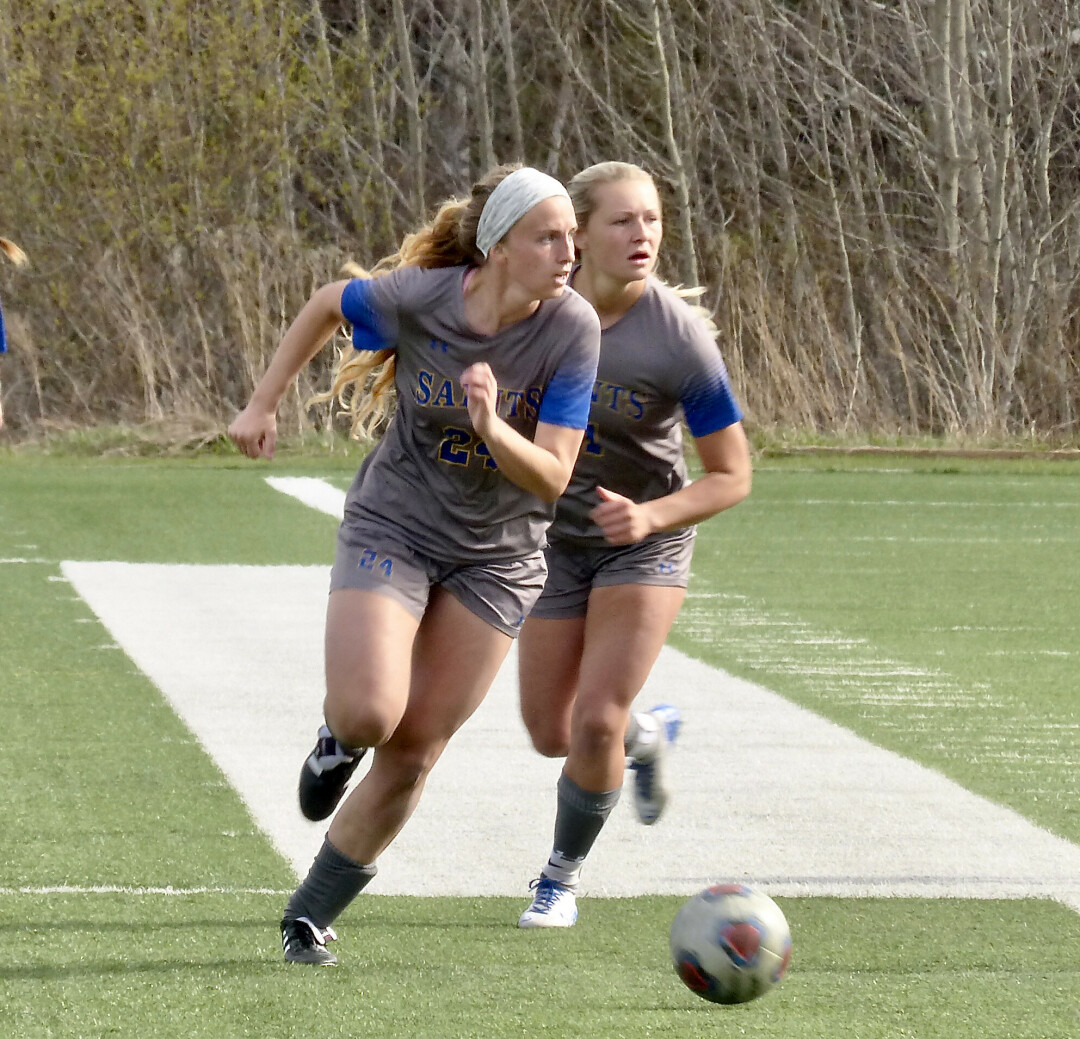 Watching competitive soccer is a test of the resolve and dedication of sports fans. You can watch for two hours as 20 players run back and forth, up and down the long field, which they call a pitch, and if the game ends up 1-0 or 2-1 it might be many games before you actually see a goal being scored.

Unless, that is, you’re watching the College of St. Scholastica women’s soccer team.
In that case, you focus in on No. 24 in Saints colors. That is Morgan Friday, a junior midfielder who finds ways to gain possession of the soccer ball, then bursts through and around defenders to get within proximity of the opposing goal, and — wham! — she blasts the ball past the diving, sprawling or mesmerized goalkeeper into the net.

Sounds easy, and for Friday, it seems to be. Going into last week’s Upper Midwest Athletic Conference tournament, St. Scholastica had won all seven of its pandemic-delayed season, and Morgan Friday, who is from Duluth East by way of Shattuck-St. Mary’s High School in Faribault, had scored 19 goals in those seven games. In the UMAC semifinals, the Saints faced Northwestern of Roseville, which is located right there in the talent-rich northern suburbs of the Twin Cities.

St. Scholastica won that semifinal 5-1, and Morgan Friday scored all five goals. That gave her 24 goals in 8 games for a tidy 3.0-goals-per-game season — an output that defies logic for any soccer observer.
On Saturday afternoon, St. Scholastica faced Wisconsin-Superior in the UMAC tournament championship game, a game with extra significance because St. Scholastica is leaving the UMAC to join the Minnesota Intercollegiate Athletic Conference in all sports this fall, so this was the finale for the Saints as a UMAC power.

Friday lofted a pass that was headed into the UWS goal by Kaiya Quam, a junior from Mounds View, to stake the Saints to a 1-0 lead. Later in the first half, Friday got the ball on the right side and moved toward the goal, and from about 30 yards away she cut loose with a left-footed shot that rose over the congestion forming in front of the goal, and the ball cleared the group, then hooked to the right, beyond the goal-keeper, and caught the far, left post and ricocheted in for a 2-0 lead at halftime.

“That was with my left foot, but I am definitely right-footed,” Friday said afterward. “And that was definitely a pass, but it hit the post and went in.”

That’s the way it is with goal-scorers. Sometimes they score even when they’re trying not to score.
In the second half, Friday escaped coverage to score again, and again, and the Saints won the title game 4-0 to claim their 15th UMAC tournament title. Friday scored three of the four goals after assisting on Quam’s game-opening goal to account for all the goals in some fashion. Because the NCAA cancelled all tournaments for Division III fall sports, the victory was the finale of St. Scholastic’s season, and Morgan Friday ended up with 27 goals in the perfect 9-0 season, for another nice round number of 3.0 goals per game. 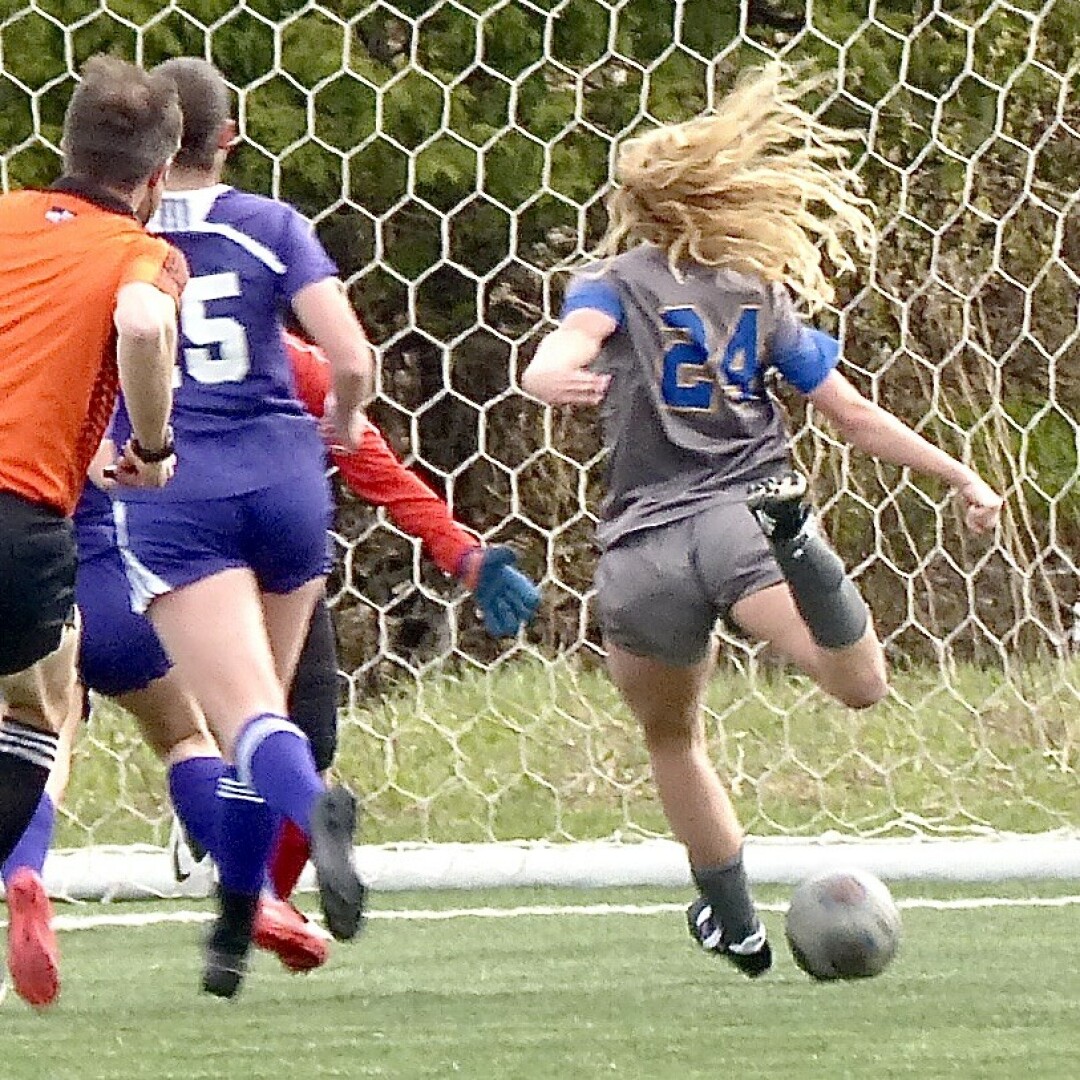 Friday talked about how she had needed knee surgery four times in her high school days, and the recovery from all that surgical repairing cost her the Division I college scholarship she had earned to Toledo, because officials at Toledo informed her she would have to sit out a year to make sure her knee was OK. She left Toledo in frustration, and after checking some other possibilities, she chose St. Scholastica, where she could study the nursing curriculum she sought, and where both her parents had once played college soccer. It’s also where both her younger brother, Nolan, and her sister, Bailey, a freshman goaltender, are currently playing soccer.

Friday was named UMAC player of the year last season, after she scored 29 goals as a sophomore to lead all of Division III in goal-scoring, and it gave her more than a goal per game in the 22-game season. But this season was put at risk by the COVID-19 pandemic, which almost eliminated all fall sports, before the allowance was made to play an abbreviated schedule this spring.

The Saints got only 9 games during the official 2020 season just ended, but Friday made the most of them with her 27 goals, going from a little over a goal a game to 3 goals a game.
Coach Dave Reyelts said he felt great pride from this team’s accomplishment. “It’s been the longest preseason ever,” he said. “We started practice in September and couldn’t start playing games until April. They deserve everything they got. We’ve got a lot of strong players, and of course, Morgan is a special player. She told me she wanted to be more of a playmaker this year, and she doubled her assist total.”

But scoring goals is still her specialty. Even when she tries for assists.

The Wisconsin-Superior men’s soccer team also capped a dominant, undefeated season in UMAC soccer by winning the men’s tournament with a 5-0 victory over Bethany Lutheran, jumping ahead 3-0 in the first half and completing its fourth straight UMAC tournament title.

Spring sports do get the chance to advance, and the St. Scholastica men’s tennis team is on its way to Chicago this week to play in the NCAA Division III competition. Barely. The doubles final in the championship match against Wisconsin-Superior was the last of three doubles matches to open the final day, at Longview, and when the No. 1 doubles lasted longest, it was up to Elliot Schneider and Jack Kearney to snatch a victory that proved pivotal later. The Yellowjackets took the lead as the singles play ensued, and held on until the undefeated Schneider came back to win at No. 1 singles, as well, giving the Saints a 5-4 victory. The victory gave the Saints the UMAC’s automatic berth in this week’s NCAA Division III tennis tournament in Chicago on this Friday. 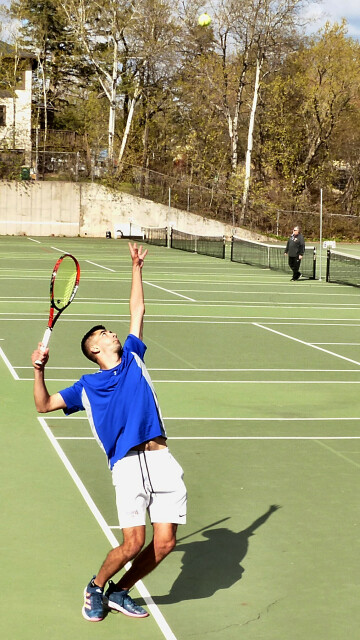 Elliot Schneider waits for his service toss to come down during St. Scholastica’s 5-4 UMAC tournament championship final. Scheider remained undefeated at No. 1 singles and teamed with Jack Kearney to win No. 1 doubles, and he was named UMAC Player of the Year. The Saints head for Chicago and the NCAA Division III tournament.

Schneider, a senior from Duluth East, is 12-0 in singles and after the tournament he was named UMAC tennis player of the year. The Saints needed both of his triumphs to win the championship. UWS had won at No. 2 doubles to counter Scholastica’s No. 3 doubles victory, and UWS held a 6-5 edge in the No. 1 doubles play to turn what might have seemed almost a routine victory into a pressure-filled final. The Saints Schneider-Kearney tandem turned up their play to win the final three games and claim the 8-6 victory.

In the following singles competition, the Yellowjackets won two of the first three matches to take a 4-3 edge over the Saints, but their bid for the upset of the decade was stalled when Bradley Golant lifted the Saints into a 4-4 deadlock by winning 6-1, 6-3 at No. 6 singles. That left the teams tied and the outcome up to No. 1 singles, where Schneider left no doubt — winning 6-4, 6-1 to secure the 5-4 triumph for the Saints in their final UMAC competition.

The Minnesota Wild comes to the abrupt end of the curtailed NHL season with two closing games at St. Louis this week. The Wild stand third, behind Vegas, which is in hot pursuit of Colorado in the division. When it ends, the playoffs will start almost immediately — probably this weekend — with No. 4, St. Louis, at No. 1, and the Wild facing the team that doesn’t finish No. 1.

There is all sorts of sentiment for the Wild to play Vegas, because they’ve done well against the Knights all season in this conference-only competition. But hockey fans should know that the St. Louis Blues are playoff hardened and will be a handful for whichever team wins the title. And my concern for the Wild is that regardless of how well they’ve played, they have played nearer to playoff-intensity down the stretch, and Vegas is a veteran outfit that may have been conserving something for playoff time.

If that becomes the first-round series, the Wild shouldn’t celebrate playing Vegas, because if both teams turn it up a notch, Vegas might have more flexibility to turn it up while the Wild will need all cannons firing, just as they’ve been doing for six weeks.